We’re All Default Keynesians Now, and How Bitcoin is Changing That

“We’re all Keynesians now.” Milton Friedman coined the phrase, often miscredited to Richard Nixon, back in 1965. And that hasn’t changed since then. Unless you began your Austrian economic education at birth in some unknown Austrian paradise, on this planet at this particular time in human history, I think we can safely say we’re all Keynesians by default.

A default Keynesian is a person who, probably unwittingly and passively, supports the centralized monetary and fiscal policies that are descended from the ideas of economist John Maynard Keynes simply because that’s the way things are now.

He’s a dead economist whose ideas currently have an effective ideological monopoly on the global economy.

Why does this matter?

There are excellent resources available to help you understand what money is and to learn its history, but here’s the gist:

Humans discovered money as a solution to the problems of barter, described by economists as the coincidence of wants problem.

Human society arrived at a consensus, or Schelling point, that gold is the best money.

Over and over again through history humans figured out how to centralize the power to control gold and inflate its value beyond its natural historical inflation rate of about 1.5-2% (simply, the amount of gold we mine from the Earth every year).

Most recently this human drama took place through the creation of the US Federal Reserve in 1913, the global agreement to use the gold-backed dollar as the global money — the Bretton Woods agreement — in 1944, and the removal of the US Dollar from the gold standard by Nixon in 1971.

Since then central banks around the world, including the United States Federal Reserve, have, over and over again, inflated the money. They make printing it sound complicated and wise with lots of big words. Really it amounts to instantly creating more digital dollars out of thin air and giving it to big banks to lend or using it to buy lots of equities.

Keynes played a key role in all this by providing academic justification for government and central bank intervention during recessions through monetary policy (reduction of interest rates) and fiscal policy (government spending). 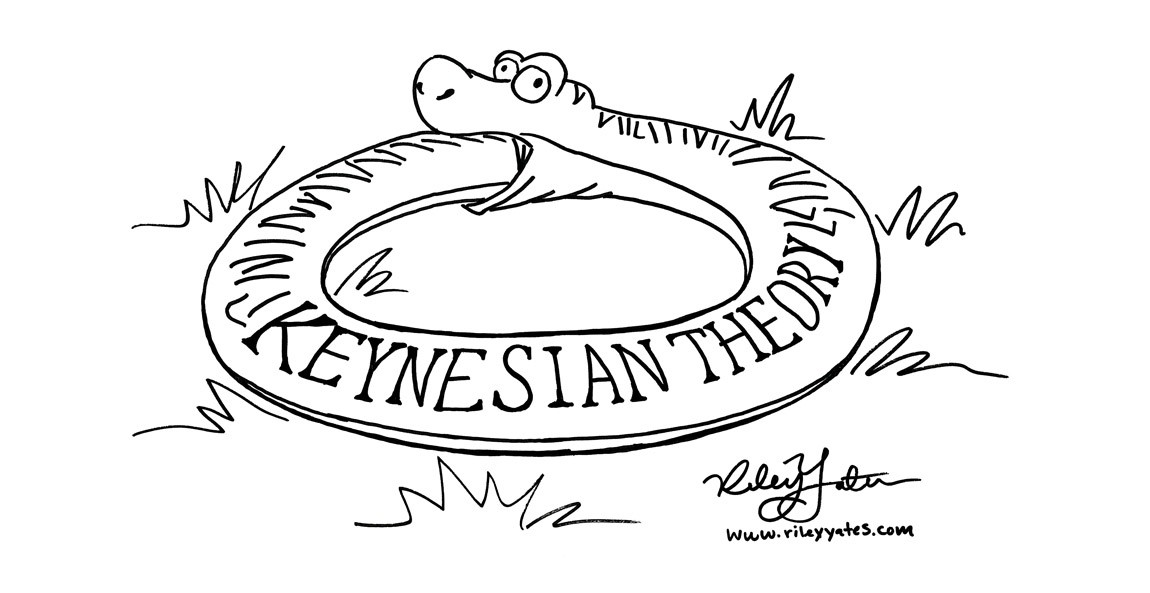 The problem is that it is all too easy for central banks and governments to lower interest rates, print money and spend it in the face of a recession as it is usually a popular thing to do in the short run, but the counter-cycle actions prescribed by Keynes, to raise interest rates and taxes when the economy is growing, are less popular and often never happen.

Keynesianism gives credence to the conceit that a few people can effectively improve the function of money in an economy by controlling it. Governments and central banks love that idea for obvious reasons. The current world economic order is run by Keynesian thinking. It’s simply the way things are now.

But now there’s another way.

The red pill at the bottom of the rabbit hole.

Two of the most loved are the red pill, from The Matrix, and the rabbit hole, from Alice in Wonderland. These two are invoked so often because they get at the idea that bitcoin leads to an education, or reeducation, on many fascinating topics. Chief among these topics is that bitcoin is teaching us default Keyensians en masse what money really is — and this is the most important lesson bitcoin teaches us.

What money really is.

These days, like many before them, we’re forced to use certain monies by the decree and enforcement of national governments and monarchs. But this isn’t what money really is. This is what we bitcoiners refer to as “fiat money”.

Despite what default Keynesianism has us believing, money isn’t that complicated. Money is simply a good, asset or technology that is determined by the free market of human commerce to be useful to solve the problems of barter and store the value of your labor over time. Money has network effects, just like the internet itself and the social networks that are built on top of it. Austrian economics hypothesizes that, left alone by central authorities, human markets will naturally converge on the best money, often called “sound money”. As mentioned above, humans have throughout history converged on gold as the most sound form of money. Gold, however, was unable to escape control by central authorities, so human societies have been engaged in a swing back and forth between sound money and some debased, inflated version of it.

A new option: bitcoin is the best money we’ve found.

The technological miracle of bitcoin is that Satoshi invented a sound money able to resist capture by central authorities. It is the first good, asset or technology able to be free to operate as money for a global human economy. It is unable to be confiscated, censored, debased or inflated. Bitcoin is a profound zero to one moment and the implications for human society are nothing short of revolutionary.

The reeducation of the default Keynesian masses.

The collection of economic ideas that has persisted as an alternative, like heroic cockroaches after a Keynesian ideological Armageddon, is called Austrian economics. Austrian economic thinking has been carried forth by small groups of devotees to the academic tradition of Mises, Hayek and Rothbard, political bands like the Libertarians of the United States and speculators like the gold bugs.

The first bitcoiners were the cypherpunks who came mostly for the tech. The next wave brought the Libertarians and gold bugs who came mostly for the sound money. Based on my observation of available literature, public internet communciations, and my private conversations with bitcoiners, it appears to me that both of these groups skewed heavily toward awareness of Austrian economic ideas compared to the general population.

I ran a Twitter poll earlier this week to ask bitcoiners about when they first started learning Austrian economic ideas, before or after they discovered bitcoin. 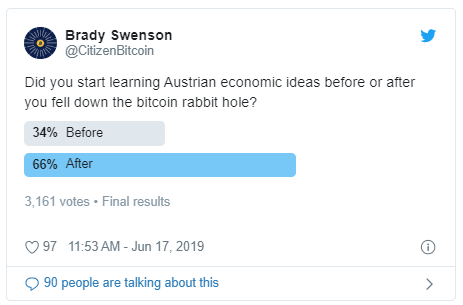 The results surprised some seasoned Austrian economics devotees. Right now, with a significant sample set, it appears that fully two-thirds of bitcoiners have been introduced to Austrian economic ideas by bitcoin. We’re in a new wave of bitcoin — one in which most new bitcoiners are default Keynesians being taught what money really is by bitcoin itself.

We’re now in the midst of competing experiments of epic proportions. Central banks and governments around the world have gone all in on centralized, inflationary monetary and fiscal policies. And the first sound money able to resist control by central authority is competing against this centralized model of money control. Austrian economics has a new and better horse in the race. Where gold inevitably wore down in the face of the constant pressures to centralize control of money, bitcoin seems able to resist, and indeed actually grow stronger in the face of centralization pressures.

We know very well from history that humans will centralize control of money if it is at all possible, and the value of centralized money is proven to be inevitably debased and inflated away. As the first sound money resistant to central control bitcoin is wealth insurance against the historically probable eventualities of the centralized control of money. It’s downright rational _for all default Keynesians to hodl bitcoin because _the way things are now is no longer how it always has to be. There are default Bitcoiners being born every day.

A good next step is to read Saifedean Ammous’ “A Beginner’s Guide to Austrian Economics”, it’s full of references to source material, and/or listen to Stephan Livera’s podcast episode “Intro to Bitcoin Austrian Thought”. If you’re ready to dive into some source material check out these books from Gigi’s bitcoin resources.

Thanks for reading! Please share it if you liked it. Check out the Citizen Bitcoin podcast if you haven’t yet. Also, since bitcoin is making me a shameless capitalist, I’ve got a shirt to sell ya, it supports the pod.