1/ As ambassadors of #Bitcoin, I believe we must speak the common tongue and avoid esoteric language so that our message can penetrate minds far and wide. Here, I will shed some light on the Bitcoin and cryptoasset universe in an exoteric nutshell. Let’s begin… 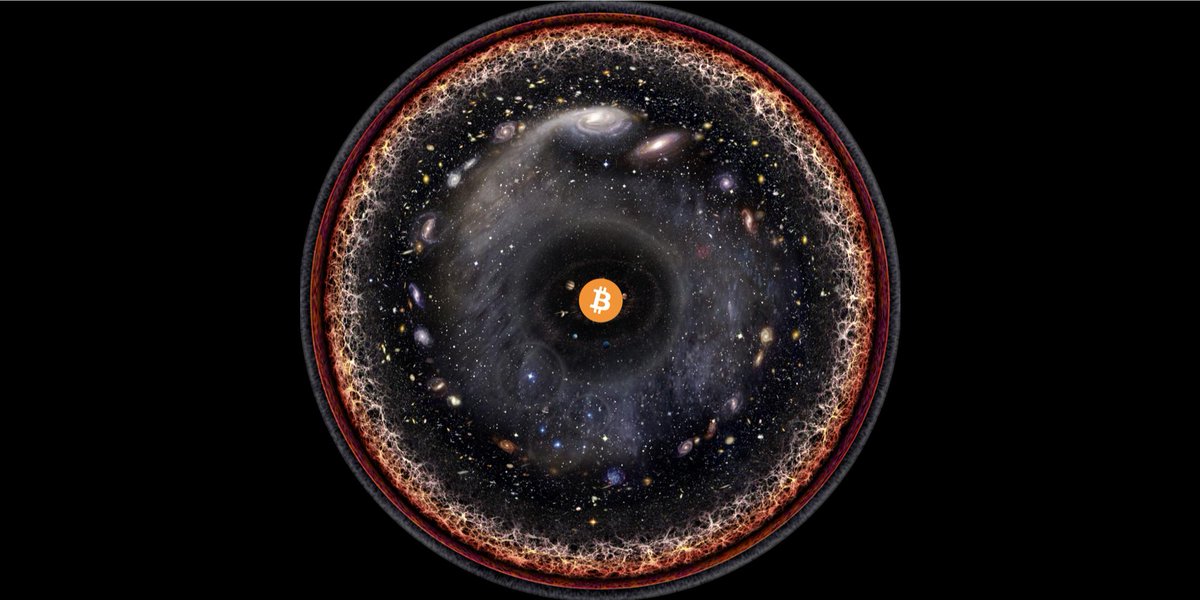 2/ When we look at the cryptoasset universe, there are two distinct hemispheres: 1) Bitcoin and 2) everything else, which are commonly known as Alternative Cryptoassets or Alts

3/ Bitcoin is more akin to the internet itself, which is composed of an open-source protocol stack called the internet protocol suite (consisting of http, TCP/IP, etc.)

5/ Bitcoin can be thought of as the latest layer in the internet protocol suite and, we believe, will grow to touch everything and everyone that the internet touches today

6/ This perspective also gives us a useful analogy when thinking about how one could stop Bitcoin: The analogous question is: ‘How does one permanently turn off the entire Internet worldwide?’

7/ Bitcoin is free market money competing against monopoly money (pun intended). Bitcoin is disintermediating the market for money, which today is monopolized by central banks 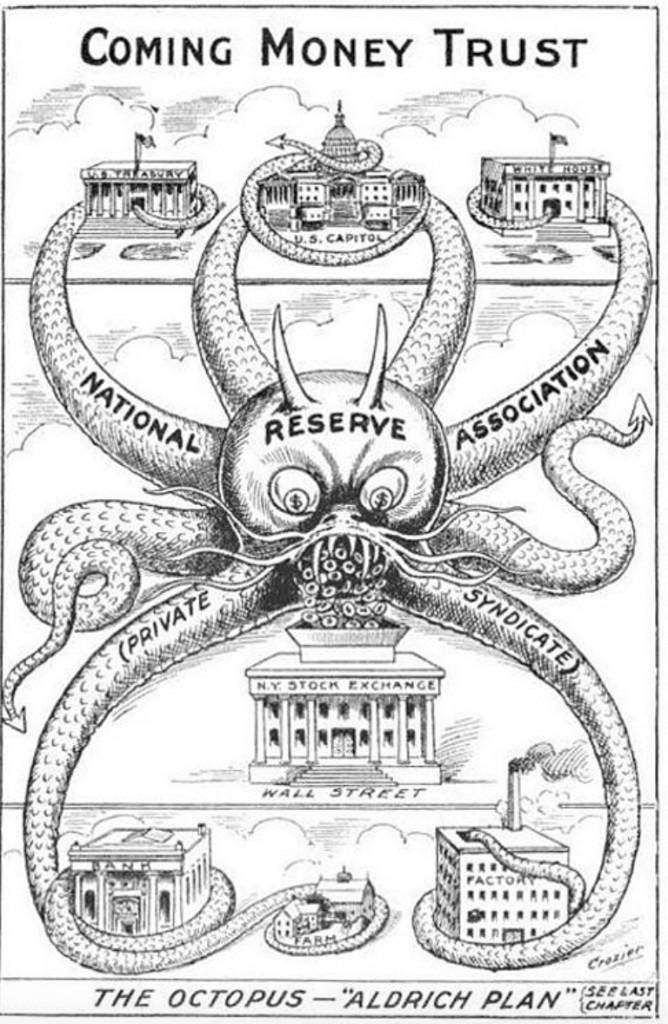 8/ In the other half of the cryptoasset universe, we have Alternative Cryptoassets (also called Alts or Altcoins) 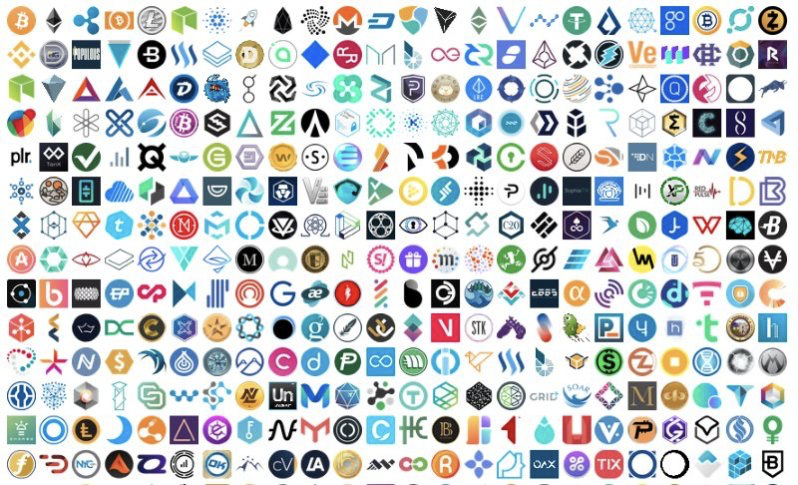 9/ Alts have adopted the open-source technology underpinning Bitcoin to attempt to compete against it directly, disintermediate other markets, or enable new markets

10/ So far, the use cases for Alts are mostly unproven (with the possible exception of Ethereum) and Bitcoin is positioned to capture the vast majority of the value created during this entire wave of innovation

11/ Alts are venture capital investments that can be launched at extremely low cost and are subjected to little, if any, professional due diligence (hence their other nickname - shitcoins) 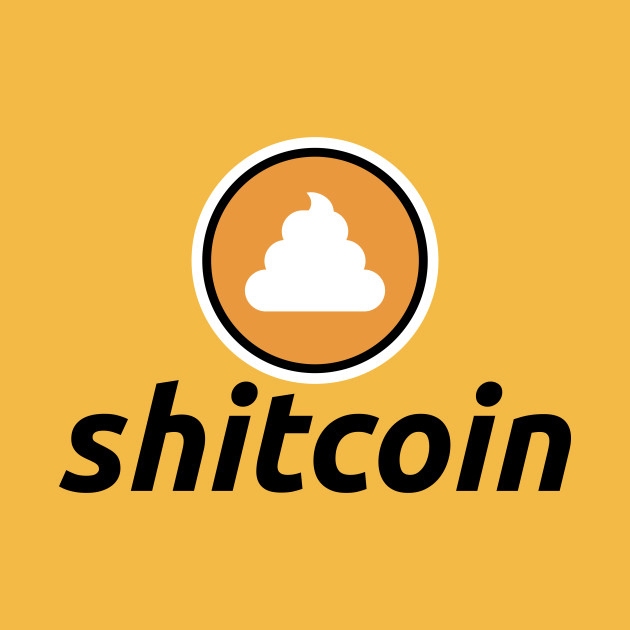 12/ Some alts may one day succeed meaningfully, however these venture-style investments are much more risky than Bitcoin

13/ Intriguingly, although Bitcoin is a modern innovation, to understand its value proposition fully we must first dive deep into the history and nature of money…

14/ Throughout history, money has evolved many times – it has taken the form of seashells, salt, cattle, stones, precious metals and most recently government paper

16/ Monetary evolution, a market-driven technology selection process, is somewhat similar to the evolutionary process we see in telecommunications technologies:

17/ No matter what technology is used to accomplish it, the purpose of telecommunications remains the same: to communicate information across space and time

18/ However, the telecommunications technologies we use to communicate evolve over time (from cave paintings to carrier pigeons to newspapers to telegraphs to telephones to digital media)

19/ As newer telecommunications technologies are invented that provide higher speed, fidelity, reliability, traceability or mobility – they become the dominant means of communicating information across space and time

21/ However, the monetary technologies we use to communicate value also evolve over time (from seashells to salt to cattle to stones to precious metals)

22/ As newer monetary technologies are invented that provide higher hardness, divisibility, portability, durability or recognizability – they become the dominant method of communicating value across space and time

23/ Money has many characteristics, but the primary trait which determines whether it succeeds or fails in the free market is called ‘Hardness’ (on which we will now focus)

24/ Hardness is the difficulty to produce an incremental unit of the monetary instrument (ie. the energy expenditure necessary to mine an ounce of gold or produce a US dollar, for instance)

26/ Each time an additional monetary unit is created, the other monetary units become less scarce and lose purchasing power, an effect commonly called inflation (the inverse of the stock-to-flow ratio)

27/ Inflation, a euphemistic term, is actually the dilution of monetary value and an insidious form of taxation without representation. Inflation can be easily understood with a baseball card analogy:

28/ If I have 1 of the 100 Babe Ruth rookie baseball cards in the world, each time someone discovers another Babe Ruth rookie card mine becomes less rare and therefore less valuable. The same is true with money, each time a new unit is created all other units decline in value

29/ In a free market, people naturally and rationally choose to store their wealth in the monetary technology which is hardest to inflate (by mining, printing, counterfeiting, etc.) 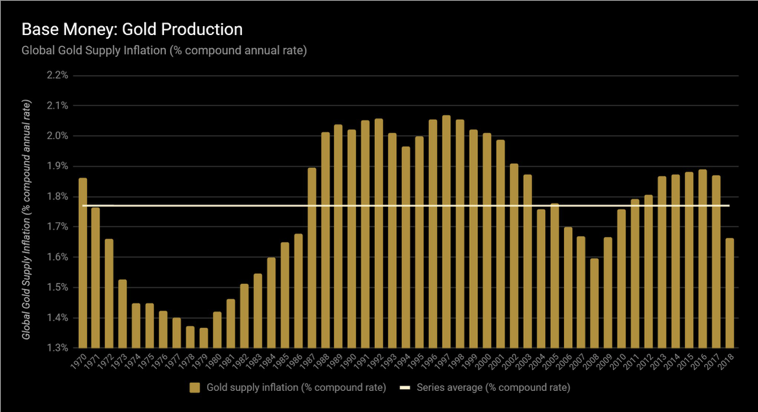 33/ The Hardness of gold resulted in it outcompeting silver several times throughout history and is the reason silver is almost entirely demonetized today. This competitive dynamic is easily explained from a game theory perspective:

34/ Since gold is harder than silver, anyone who profits from silver production (where marginal revenue > marginal cost) will seek to store their profits in the hardest form of money available, thus triggering investment flows from silver (or any other softer money) to gold

35/ However, gold has one major drawback, the divisibility problem: Gold is heavy and difficult to deeply subdivide, which makes it difficult to use as a medium of exchange (ie. buying coffee with gold coins is not practical)

37/ Eventually, national governments stepped in and solved the divisibility problem of gold by issuing bank notes (essentially paper IOUs), which are light and easy to transact with, that were fully redeemable for gold

38/ This caused the centralization of gold within bank vaults which became too tempting for governments and their newly formed central banks to resist expropriation of, thus catalyzing the fractional-reserve banking practices now ubiquitous in the modern world economy

39/ As governments created more bank notes than they could support with their gold reserves, they started revoking bank note redeemability for gold, thus implementing the ‘money backed by nothing’ we all use now - fiat currencies

40/ A brief history of fiat currencies: In 1933, executive order #6102 required all US citizens to exchange their gold holdings for US dollars under the threat of up to 10 years imprisonment 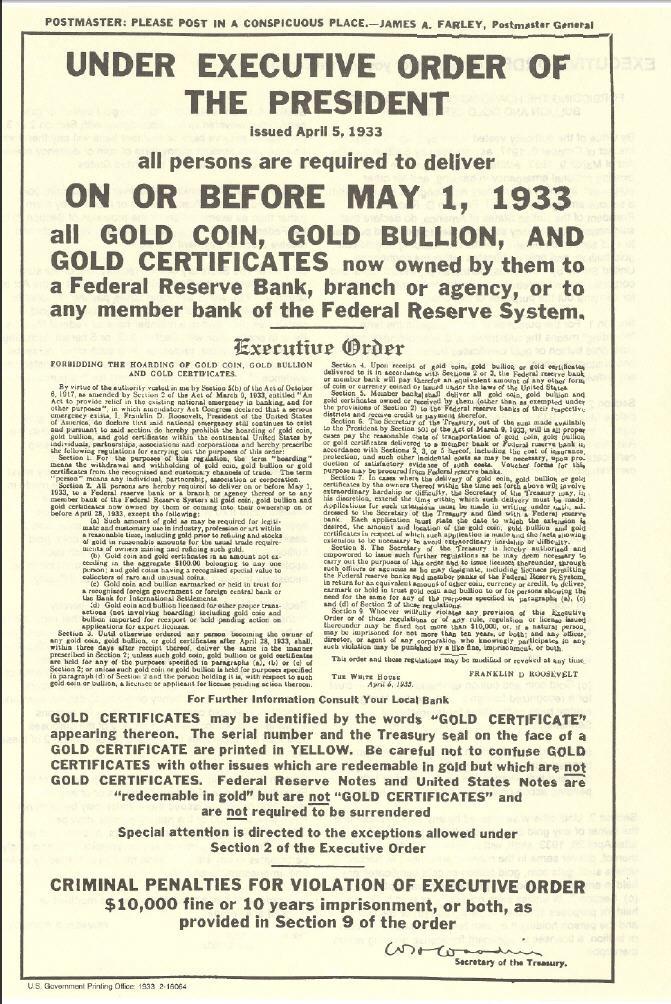 41/ During WWII, The US became a safe haven for European gold hoards as a means of protection from Nazi plundering, thus positioning it to rewrite the rules of the global economic order

42/ At the conclusion of WWII, The US established itself as the global central bank, in which all international currencies would be pegged to the US dollar, which itself was to be pegged to gold, at the Bretton Woods Conference

43/ In 1971, US President Nixon unilaterally cancelled the direct international convertibility of the US dollar to gold and promised that the US would eventually return to the Gold standard, which of course never happened, leaving the world on a fiat standard

44/ So today, the world is dominated by government fiat money which is backed by absolutely nothing and is in fact the Softest form of money that has ever existed (the cost to produce an additional unit of fiat money is near-zero) 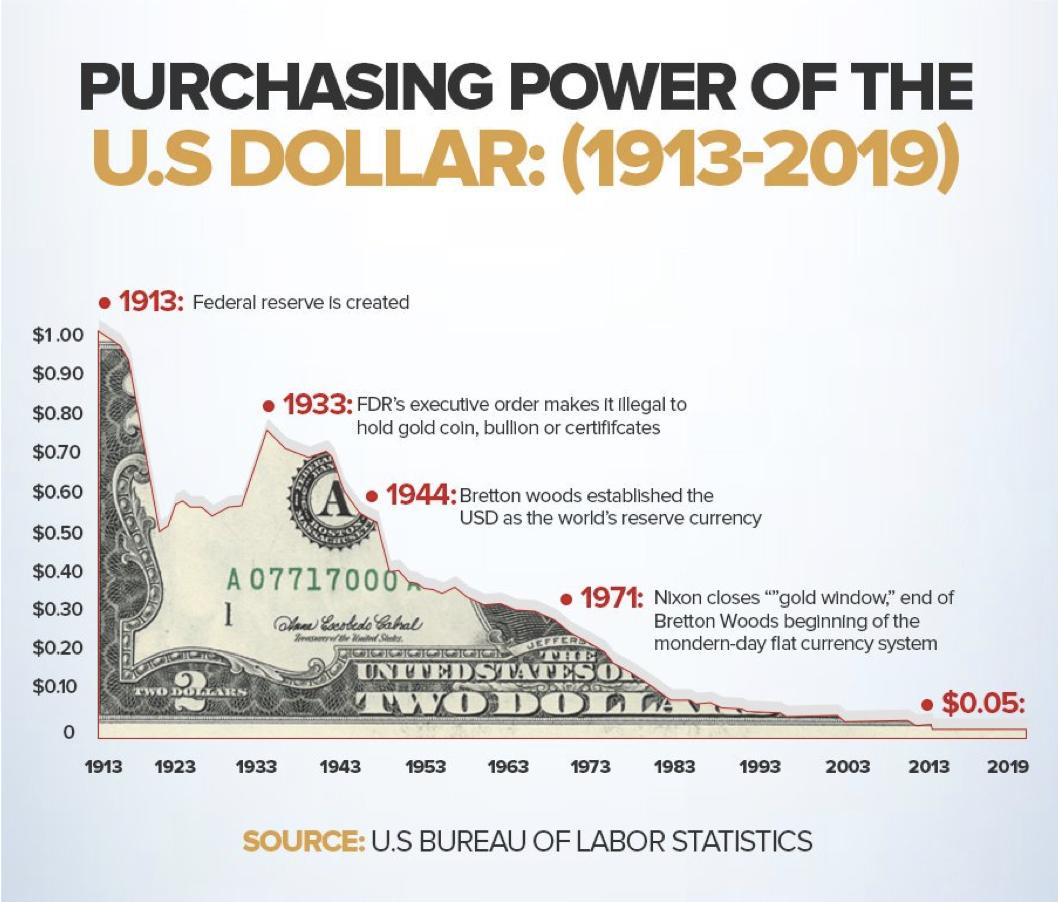 45/ In the wake of the 2008 Great Recession, when central banks all over the world were busy printing more fiat currencies to reflate their respective economies, Satoshi Nakamoto released an open-source software project into the world called Bitcoin 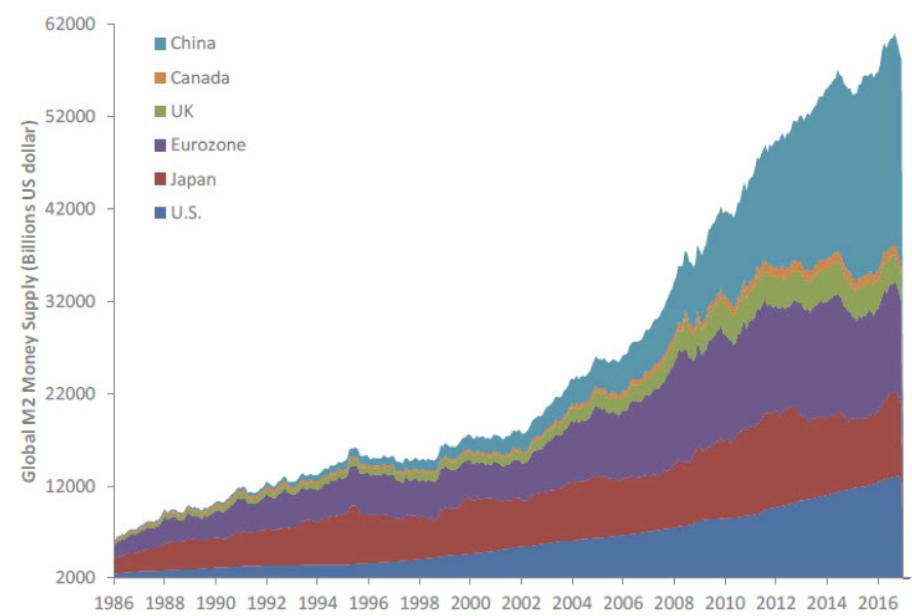 46/ Bitcoin is the Hardest form of money that has ever existed. This momentous innovation is made possible by an ever-rising production difficulty that requires expenditure of real world energy (in a process called proof-of-work or mining)

47/ Bitcoin’s stock-to-flow ratio increases inevitably every 4 years will surpass that of gold in May 2020. Bitcoin’s monetary policy is enforced by unbreakable cryptography, hence the inevitability (as sure as 1+1=2) 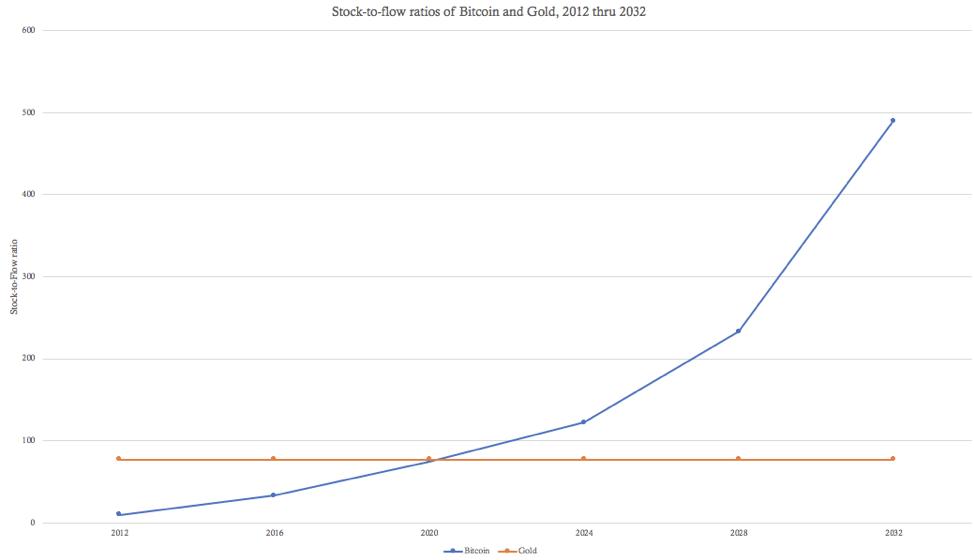 48/ Bitcoin is also the world’s first incarnation of an asset with perfect price inelasticity of supply, as changes in its price have absolutely no impact on its supply flow. This means increases in demand for Bitcoin can only be expressed in its market price

49/ If the price of gold increases, its new supply flow will increase as new miners enter the market and new methods of gold mining becoming economically feasible (since the gold miners can sell their product at a higher price), thereby decreasing its stock-to-flow ratio

50/ With Bitcoin, no matter how much its price increases, it is absolutely impossible to create any new supply flow beyond its mathematically enforced and universally transparent production schedule

51/ Bitcoin is also the world’s first instance of ‘absolute scarcity’ as its monetary policy is fixed, only 21M units will ever exist. Before Bitcoin, only time itself was absolutely scarce (the formula for Bitcoin’s fixed monetary policy is pictured here) 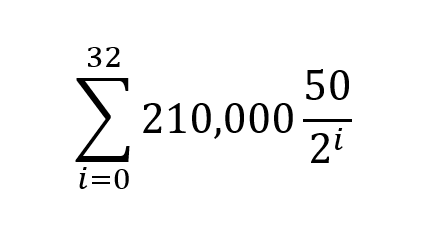 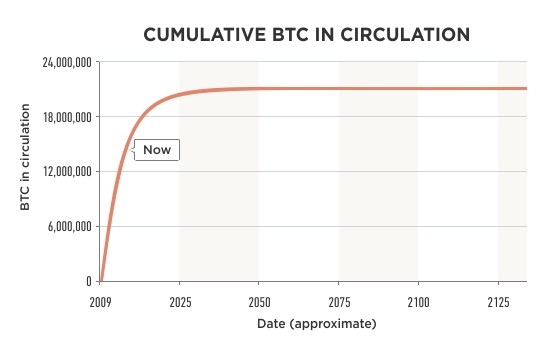 54/ Bitcoin runs countervailing to government monetary policy which is uncertain, opaque and subject to change based on the whim of bureaucrats 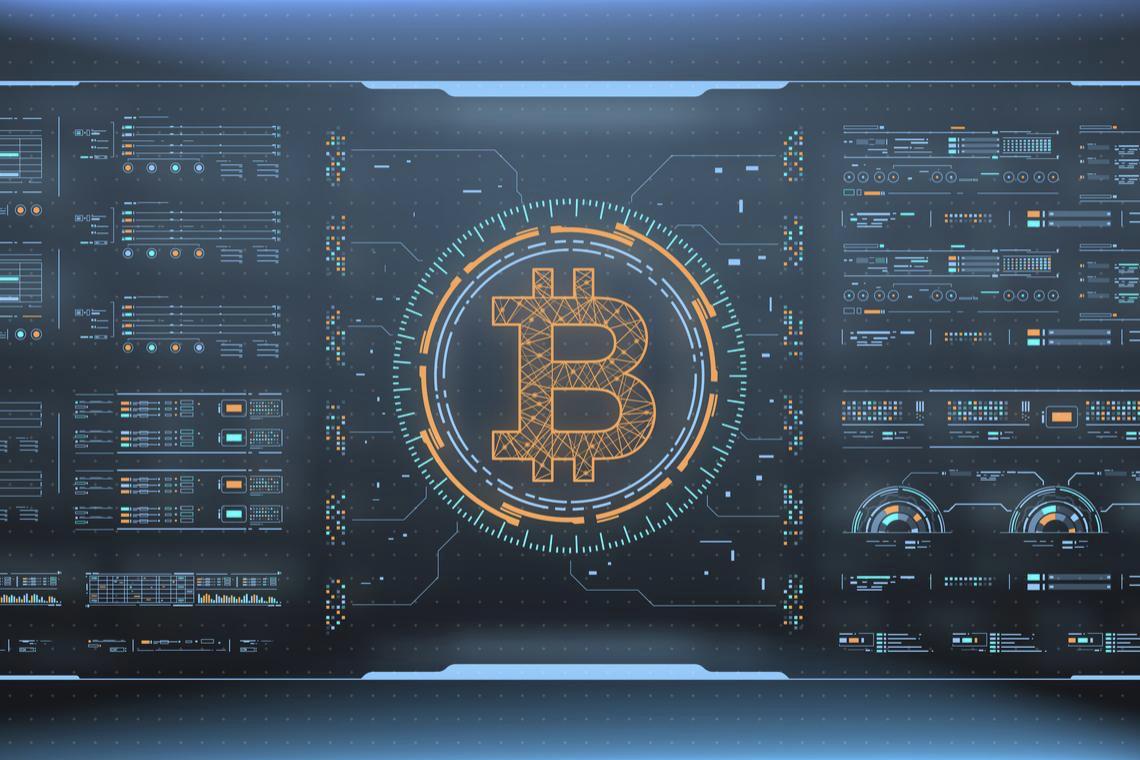 55/ Essentially, we each must decide if we are to trust the whimsical nature of self-interested bureaucrats or the inviolable nature of mathematics to manage our money supply 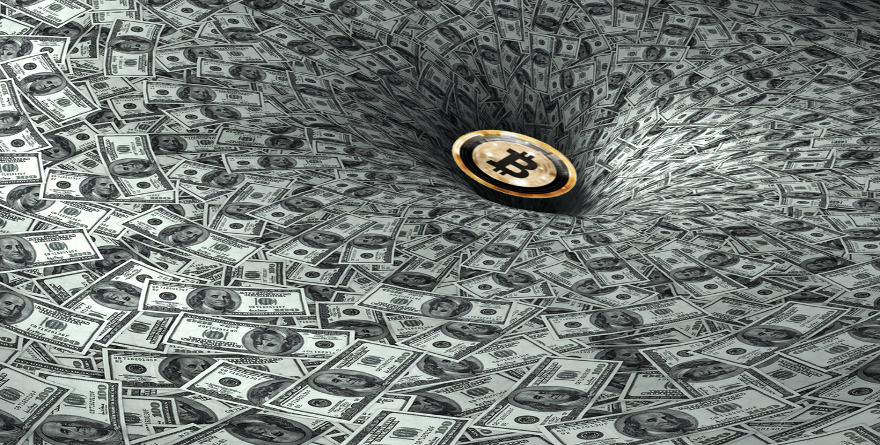 57/ Game theory and history shows us that people will naturally and rationally seek to store their wealth in the Hardest money available to them. This emergent market behavior is based on the anticipated decisions of others and will eventually spiral into an adoption frenzy 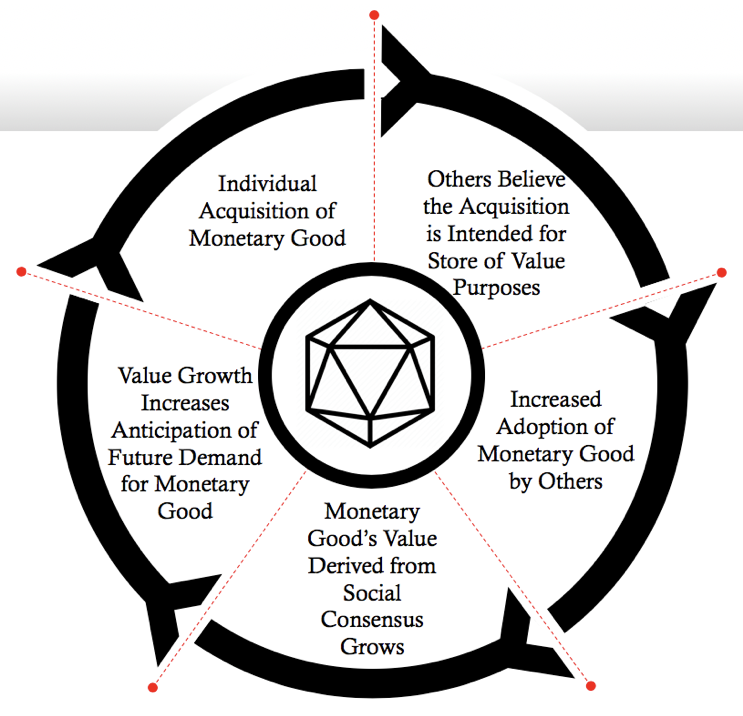 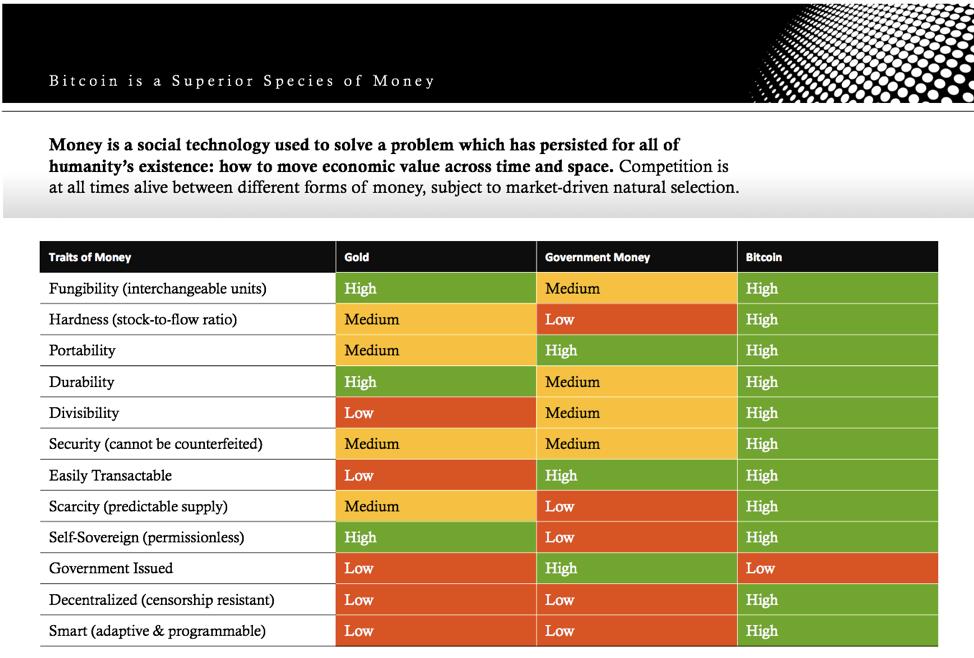 59/ Hard money, as selected on the free market, reigned for the first 4,900 out of 5,000 years of human commercial history and we are witnessing its reemergence in the rise of Bitcoin 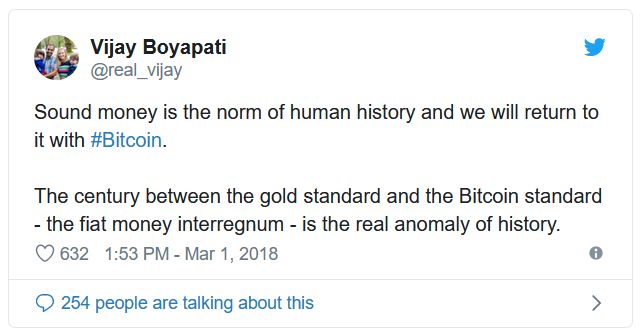 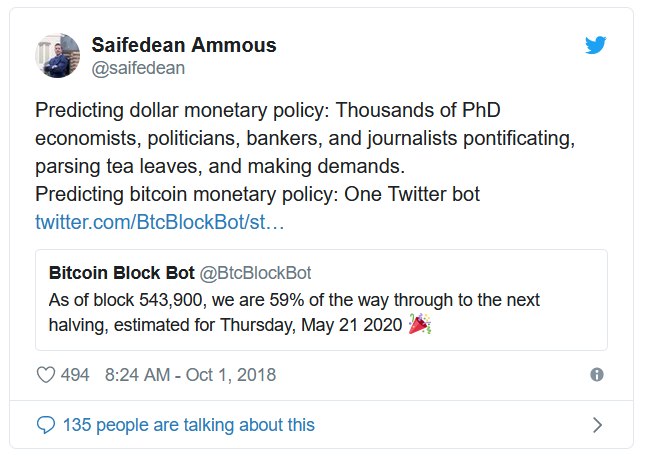 62/ Thank you for reading. This is the Bitcoin and cryptoasset universe in a nutshell. 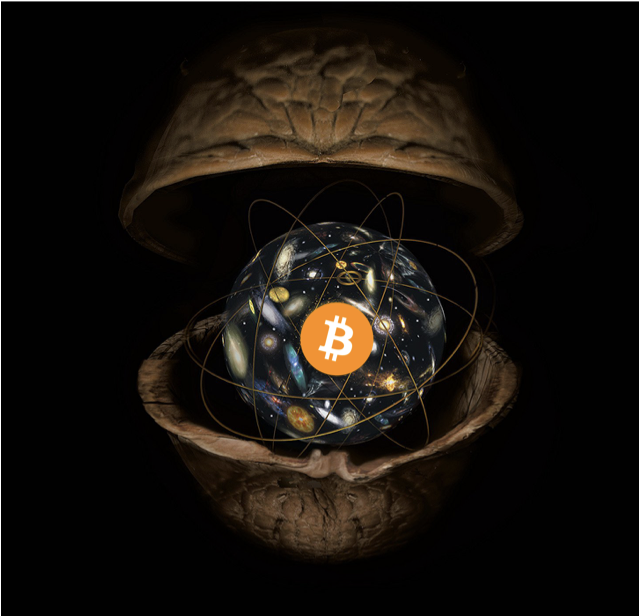