The End Of Gold

The reason why Bitcoin is much better money

This Essay is based on the talk I gave at the last ValueOfBitcoin conference. It includes a lot of ideas that I have previously outlined in my essays Mass Adoption of Bitcoin’s Values and Stop Calling For A Free Market In Money. The argumentation is built from the ground up, which means we will start with the function and properties of money.

Also, we will only compare Bitcoin and Gold in their function as money. There are many good reasons to invest in gold—and other assets such as real estate—but as I will show, believing it is superior money should not be one of those reasons. Therefore, this essay is not an attack on gold as an investment but only an attack on gold as money.

The Functions of Money 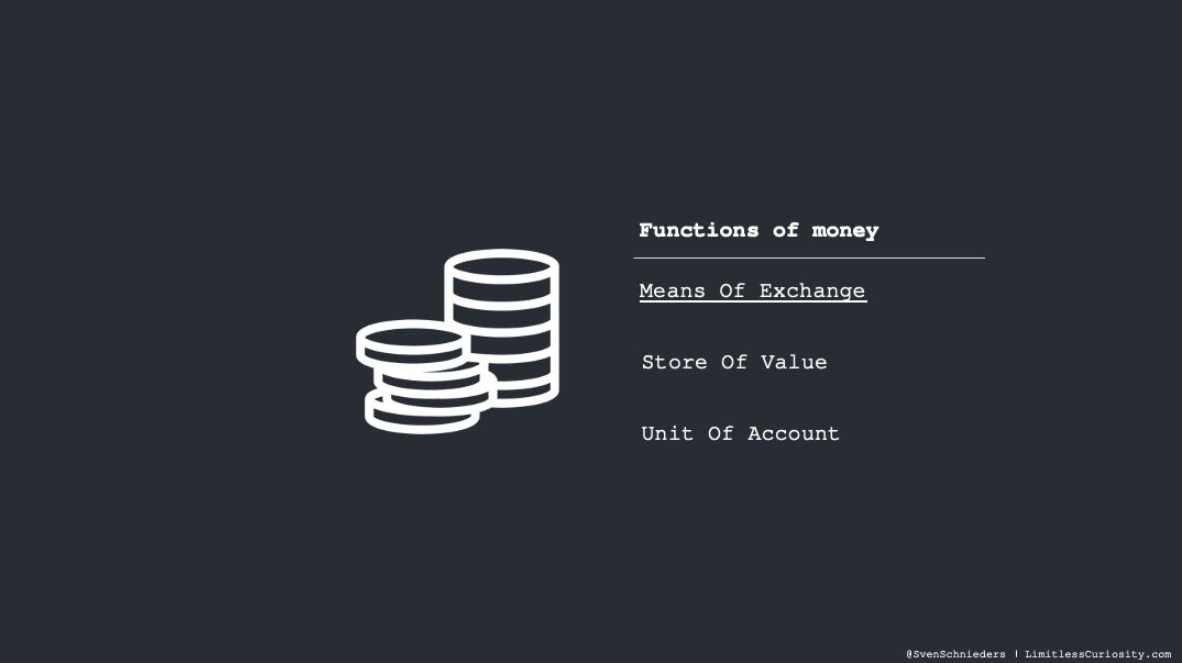 The Properties of Money 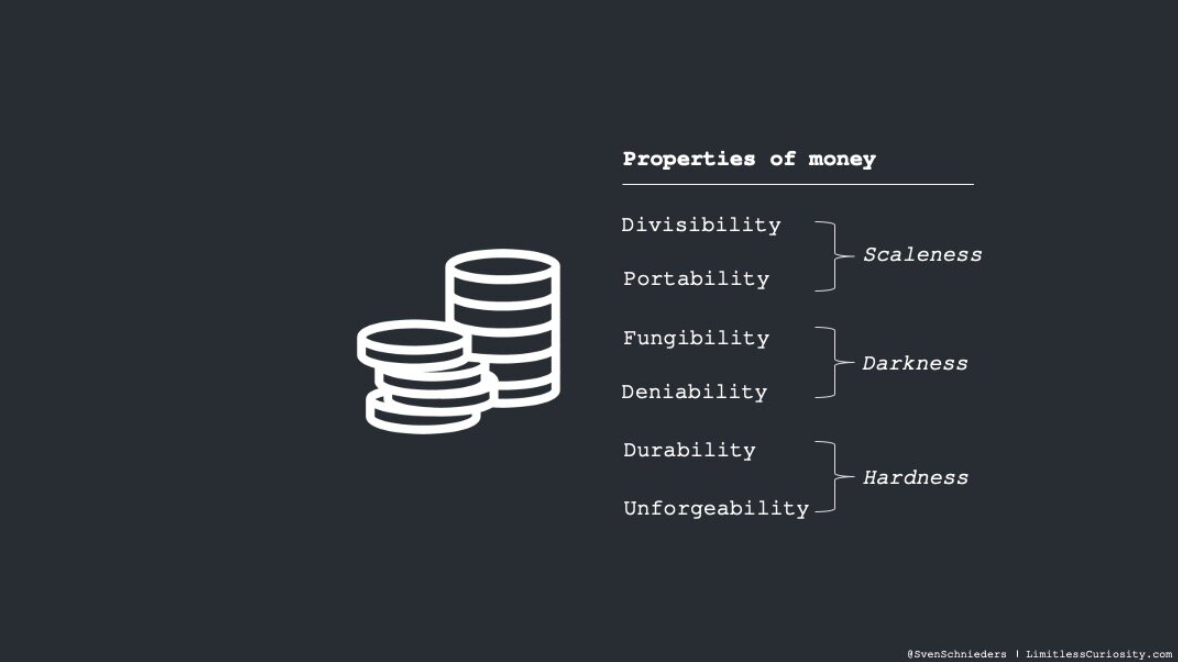 These three categories—Scaleness, Darkness, and Hardness—were put forward by Giacomo Zucco, but similar frameworks have been suggested by others and are almost universally accepted. Scaleness expresses the desire for something easily portable across time and space, while it can also be used in small and large quantities. Darkness captures the need for financial privacy. And Hardness refers to the difficulty of creating more supply, which also includes counterfeiting. For a deeper dive into the origins of money and the need for these properties, I recommend reading Nick Szabo’s essay Shelling out, and Giacomo’s series Discovering Bitcoin. We will discuss each of these properties in detail later, but let us first take a brief look at the history of gold.

A Brief History Of Gold

Before the gold standard, people paid with gold and silver coins. Silver was needed for smaller payments because a gold coin is worth too much and not very divisible. This system of physical coins still had two major shortcomings. First, there is no unit of account. Expensive things were priced in gold and cheap things in silver. This is made worse by the fact that the exchange rate—how many grams of silver are needed to buy one gram of gold—fluctuates. The second shortcoming is that settling large transactions (e.g., between banks) is extremely costly and inefficient, which limits the size of the economy.

These two main problems, together with the technological advancement of telegraphs, brought about the change towards the usage of certificates, instead of physical metals. The certificates were backed with a certain amount of gold and could be redeemed immediately. This solved the divisibility problem of gold and made silver useless as money. Gold has a higher stock-to-flow ratio—the new amount of gold that is produced each year compared to existing stock—and is, therefore, better suited for being money (harder). We’ll come back to this aspect of hardness later, but for now, just note that most people prefer to store their wealth in something that inflates little over time.

Despite the advancements in trains and railroads, exchanging physical gold was still expensive. This meant that debt between banks was seldom settled in physical gold; and banks were tempted to issue more certificates than they had gold in their reserves. What followed was a consequence of this fatal flaw outlined beautifully by Saifedean Ammous in The Bitcoin Standard:

“The fatal flaw of the gold standard at the heart of these two problems was that settlement of physical gold is cumbersome, expensive, and insecure, which meant it had to rely on centralized physical gold reserves in a few locations—banks and central banks—leaving them vulnerable to being taken over by governments.” 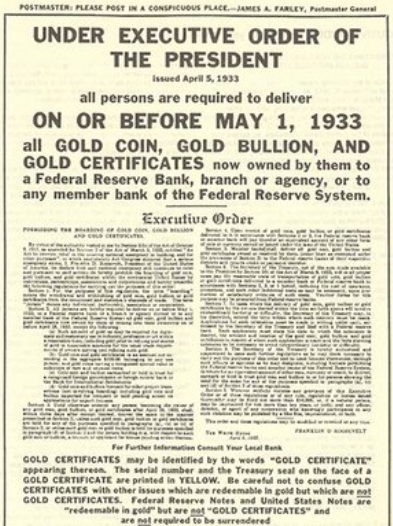 This is exactly how the gold standard ended. Governments took control of most of the supply by controlling just a few locations because they needed more money. Then they also outlawed private gold ownership. Since it is difficult to hide large sums of gold and most of the supply was already in the hands of government, no black market developed. This is how the gold standard ended and today’s fiat system began.

Now let’s take a look at the different properties of Gold and Bitcoin and how such an outcome could be prevented in the future. 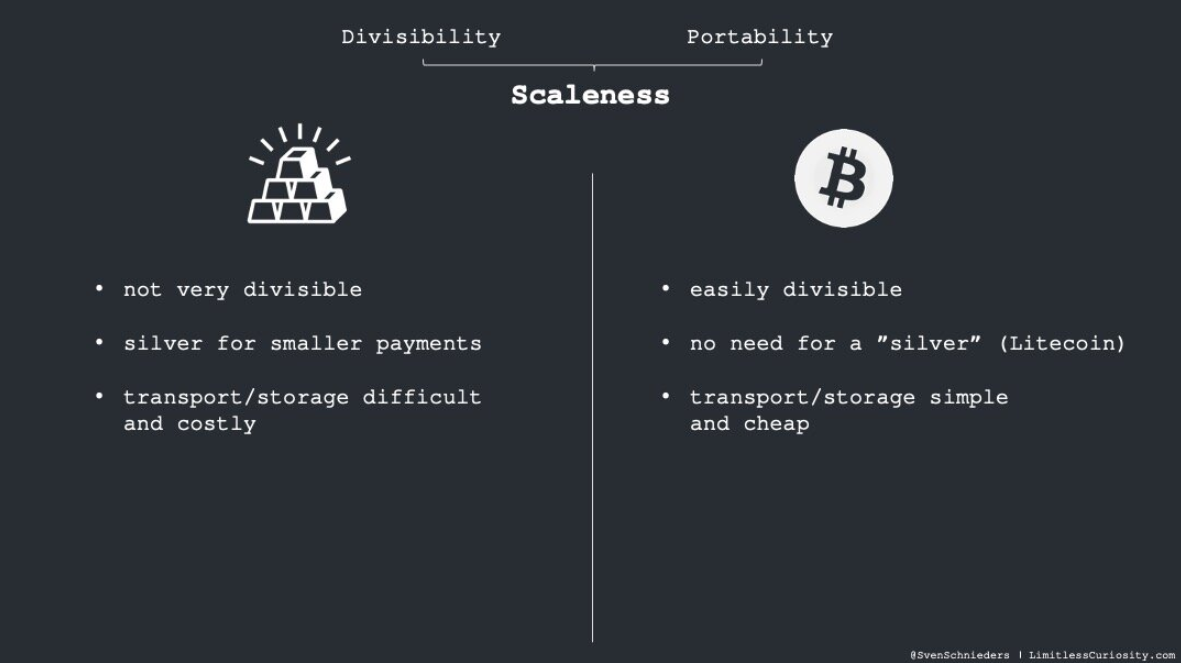 As we have already discussed, gold is not very divisible, which is why silver was used for small payments. Portability across time and space—storage and transport—are also very difficult and costly. This fact makes gold susceptible to centralization because storing large sums of gold, without a third party, is close to impossible in practice.

Bitcoin, on the other hand, is extremely easy to divide (in theory, it is infinitely divisible). It is also simple and cheap to transport and store. Here, the cost of a Bitcoin payment should not be compared to sending money over PayPal, but to a final irreversible settlement like transferring physical gold. This is the only sense in which Bitcoin payments should be considered cheap. Always remember:

Bitcoin doesn’t compete with PayPal, but with central banks.

The storage problem is solved by the digital nature of Bitcoin, which allows you to store as much Bitcoin as you want on a short key that you can remember. 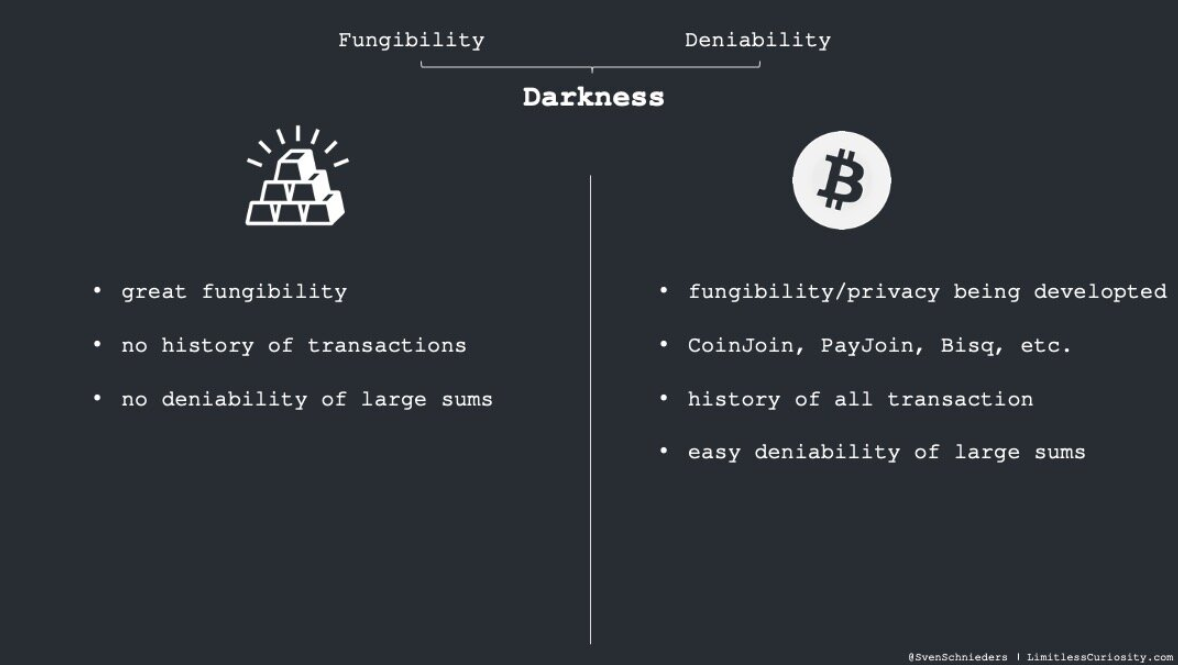 Fungibility refers to the property that all units of our money should be the same as all the other units. This is one of gold’s best properties. You can smelt in any gold bar or gold coin and make it look like any other. It is, however, difficult in practice and not possible for an individual because an expensive melting pot is needed (third party).

If you transact gold locally—peer-to-peer—there is no transaction history, and it is possible to deny your connection to any “illegal” business. However, for global or large transactions, this gets very difficult. Nor is it possible to deny the ownership of large sums of gold. You either have to store these large sums by yourself, which is difficult and noticeable, or you have to store your gold in a bank, which means that at least the bank knows how much you own.

Fungibility, and more generally privacy is probably Bitcoin’s biggest problem. Since there is a full transaction history—called Blockchain—no Bitcoin is like any other coin. Many people are working on solutions in this space (CoinJoin, PayJoin, Bisq, etc.), and I am confident that we will triumph over ChainAnalysis and KYC. In fact, the solutions available today, if used correctly, are sufficient to acquire Bitcoin anonymously and break any links. Since storing large sums of Bitcoin is simple, denying that you own large sums is simple as well, provided you know how to use the available privacy tools. 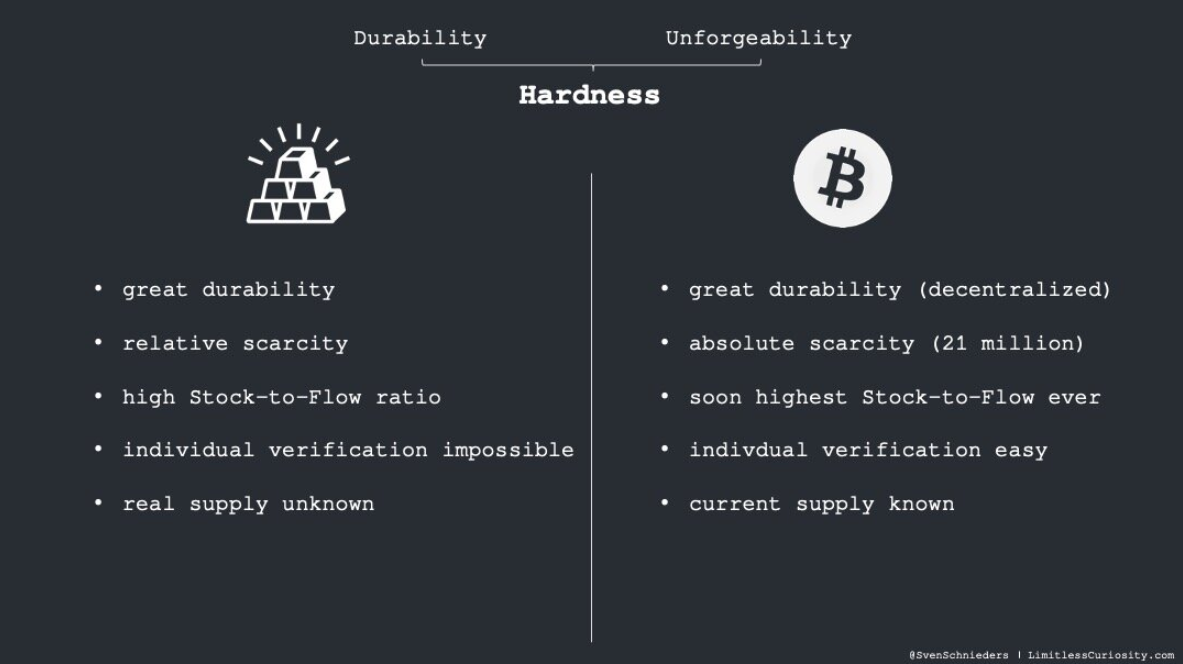 Gold has great durability and also the highest stock-to-flow ratio of anything on earth (until Bitcoin after the next halving). This is what people refer to when they talk about “sound” or “hard” money. It is an important property that the money supply cannot be inflated at will. It is costly to produce more gold and due to the long history of gold mining, the existing stock is large compared to the amount of new gold that can be mined in a year. This means that even if the demand for gold increases drastically, the supply does not change much. The inflation rate of gold is very low. This is the main property that made gold the best money available until Bitcoin was created.

The problem with gold is that it is relatively easy to counterfeit. People increase the supply by paying with fake gold. This is a big problem because verifying the authenticity of gold is difficult and costly. It also cannot be done by an individual alone because for a 100% verification, a melting pot and a lot of specialized knowledge is needed.

Now, there is a problem: you don’t want to get paid in gold certificates because you can’t be sure that they are fully backed by gold, and you don’t want to entrust your wealth to a third party, but if you are paid in real gold, you also need a third party to verify it for you (and most likely also to store it for you). Bitcoin solves this problem.

The durability of Bitcoin is great because it can be stored decentralized in many different locations. It will soon be the asset with the highest stock-to-flow ratio (the hardest asset) and after all 21 million coins have been mined, it will have a stock-to-flow ratio of infinity. In other words, Bitcoin is the first absolutely scarce good ever. More importantly, however, Bitcoin solves the verifiability problem by having a full transaction history. For a few hundred dollars, anyone can run their own full node and fully verify all Bitcoin they receive. This is the beauty of Bitcoin.

An interesting fact to note is that almost all technological developments favor the attacker over the defender. We have nuclear weapons but no defense because it is almost always easier to use a technology destructively than protectively. The same trend seems to be hurting gold. While fully verifying gold remains difficult, it is becoming easier and easier to manufacture counterfeit gold. This is why forgery scandals like this one, are becoming increasingly common. Cryptography is a rare technology that favors the defender over the attacker by making verification cheap and counterfeiting extremely costly. This is the reason Bitcoin works.

Since gold, as we have established, is difficult to store and verify for an individual, it gets naturally centralized in a few locations. These few locations can then be attacked by the state (or anyone else), and this is exactly how the gold standard ended. Due to gold’s physical nature, the emergence of a black market is difficult, and the transfer of wealth (or the trade) across borders is almost impossible.

Bitcoin solves these problems. You can store as much Bitcoin as you want in your head by remembering your private key, and you can verify all Bitcoin you receive inexpensively by running a full node. These two key points help keep Bitcoin decentralized. This means that centralized points of attack for the state or anyone else are close to non-existent. Because of its digital nature, sending it across a border is easy, and the emergence of a black market (a parallel economy) is possible. Bitcoin was created to succeed in exactly the adversarial environment where gold has failed.

Gold needs a benevolent state and a huge infrastructure to succeed because you cannot verify and store it by yourself; Bitcoin does not need any of those things.

For these reasons, Bitcoin is the only technology that allows you to claim your monetary sovereignty and liberty—something gold will never be able to do.