The Encrypted Meaning of Crypto

A very short etymology of the semantic hell that is ‘crypto’ 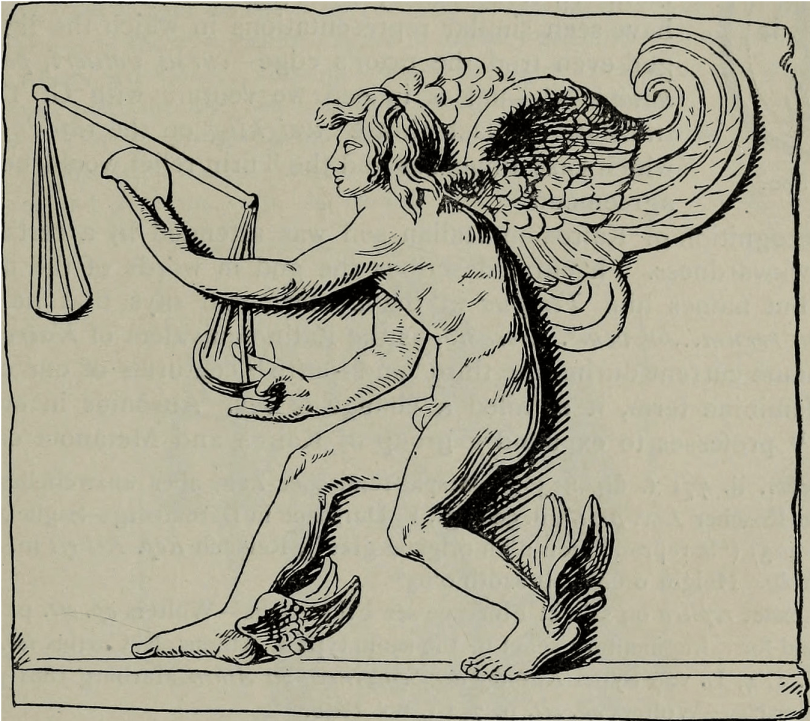 Kairos — the personification of opportunity, luck and favorable moments. Also presented as a favorable opportunity opposing the fate of Man.

The term crypto has a complex and deep history that reaches much father back then the recent development of the science of cryptography. The written word itself goes back for at least two and a half millennia, though its existence has been much longer. Through the use and abuse of the word over this time, crypto has shrouded and concealed its meaning to all except for the most astute observers. Personally I am the most guilty of this robbery of language; having continued the legacy of bankrupting the term, widely referring to everything in the crypto-currencies ecosystem, asset, token, DeFi, DLT, etc. as simply ‘crypto’. Why? Because I love that it further encrypts the meaning of the word itself, leaving it deeper in obscurity. This leaves the individual to wrestle with the question of what ‘crypto’ really means, and if they are to try to decipher it, or allow for its true name to remain hidden to them. Either way, in the words of Satoshi Nakamoto,

“If you don’t believe me or don’t get it, I don’t have time to try to convince you, sorry.”

However, I’ll take a shot at trying to convince folks because I believe this technology is messianic, and all seekers should have an opportunity to discover the truth. To understand what crypto is, and to take it seriously; there must be a deep hermeneutical process that is undertaken to allow for a sincere engagement of what crypto-graphy means in order to allow for a new form of value-ability to come into view. The real ontological discover that lies hidden at the core of this technique of power goes beyond any law, and allows for any person to use this power to protect them when nothing else can.

The origins of ‘crypto’

Coming from the ancient greek word κρυπτός (krúptō), roughly meaning, ‘I conceal’, crypto in the last century has been generally understood as being a prefix for a concealed political motive such as a crypto-facist, or crypto-communist. However, it also is a prefix for ‘of relating to cryptography’, such as crypto-suite or crypto-currency. The linguistic obfuscation here is of particular interest to us, because it allows for a much more radical form of power to lay hidden at the center of ‘crypto-assets’ through its encrypted meaning. What is particular about bitcoin, and crypto-currencies in general, is that they have given rise to a new kind of political character: crypto-anarchists. Crypto-anarchists are not of the same linguistic character that ‘crypto-facist’ or ‘cryptography’. Crypto in crypto-anarchy is referring to using cryptography as the base tool for organizing an anarchist (i.e. no laws) society. Crypto-anarchism is not attempting to the concealment of its objectives of creating anarchism; at least not initially. And to be clear, I’m not speaking of the childish ‘destroy & enjoy’ kind of false anarchism portrayed in the media, but that of the linage of Prodhorn, Bakuin, Goldman, Rocker, and so many others. Anarchism is the radical freedom of individuals through the decentralization and the diffusion of power through various non-state organizations. Through the total empowerment of individuals against the state, anarchism is the third way between communism and fascism that we must demand, and is our only hope for a future free against tyranny, despotism, and panopticism we live under today.

The concealment of crypto

Tim May knew of this linguistic pun when he coined the term crypto-anarchist, and had the following to say about it:

I devised the term crypto anarchy as a pun on crypto, meaning “hidden,” on the use of “crypto” in combination with political views (as in Gore Vidal’s famous charge to William F. Buckley: “You’re crypto fascist!”) and of course because the technology of crypto makes this form of anarchy possible. The first presentation of this term was in a 1988 “Manifesto,” whimsically patterned after another famous Crypto Anarchy and Virtual Communities manifesto. Perhaps a more popularly understandable term, such as “cyber liberty,” might have some advantages, but crypto anarchy has its own charm, I think.

Charming indeed. However, because of the semantic hell that is crypto (as in the crypto-currency ecosystem), the very meaning of what crypto-anarchy is has transmuted it into something not well-understood by most involved in the field of crypto-currencies. Over the last thirty years we have lost the key to this scripture which has created the nonsense vacancy of the term ‘crypto’ as we see it today. The metaphysical meaning of crypto has encrypted its meaning to shitcoiners, nocoiners and everyone in between for greedy, high-time preference bullshit tokens that are devoid of real value. Funny enough, these are the very people who are crypto-anarchist in the deepest sense of the word. They help propel this ecosystem deep into the heart of financial Troy, sincerely believing the gigantic horse of blockchain was a gift from the Gods. And it is. They just don’t realize that crypto is a gift from the New Gods, not the old ones. They don’t understand that this technology is uses cryptography as a tactic to organize people on anarchist lines, using cryptography to directly shield the bodies of any involved. They simply see ‘blockchain’ (a semantic hell in its own right) as another iteration of state power — of finding new laws, and ‘better’ regulation with more panoptic violations. They lack the fundamental understanding of why the explosive power of cryptography is at the heart of these systems. They lack the understand that cryptography’s fundamental objective is to protect one from ANY advisory at any cost — including all law, militaries, and tax agencies. They fail to see that the fixed supply cap of bitcoin, the proof-of-work scheme, and pseudo-anonymity are not technical issues, but politcal ones. Adversarial thinking is inherently anarchist, and cryptography has always bared the signature of this at its heart. This is why cryptography has always been a military tactic first, as it has always existed outside of the bounds of law, and existed in only the field of war long before the word cryptography was even produced. It is important to remember that anarchism has always influenced and served the original ideas of those who would later become the cypherpunks. Chaum’s 1985 paper Security Without Identity: Transaction Systems to Make Big Brother Obsolete points directly to this. It was one of the first papers that understood and connected governmental control of money with the security state, and how the technology of encryption could make big brother obsolete. Later in 1992, Tim May distilled these values into the ‘Crypto-anarchist Manifesto’, which opens with the following:

A specter is haunting the modern world, the specter of crypto anarchy. Computer technology is on the verge of providing the ability for individuals and groups to communicate and interact with each other in a totally anonymous manner. Two persons may exchange messages, conduct business, and negotiate electronic contracts without ever knowing the true name, or legal identity, of the other. Interactions over networks will be untraceable, via extensive rerouting of encrypted packets and tamper-proof boxes which implement cryptographic protocols with nearly perfect assurance against any tampering. Reputations will be of central importance, far more important in dealings than even the credit ratings of today. These developments will alter completely the nature of government regulation, the ability to tax and control economic interactions, the ability to keep information secret, and will even alter the nature of trust and reputation.

Shortly after this was written, the first of the Crypto Wars started and the struggle to break cryptography out of its militarized cage was initiated. Through the valiant and heroic efforts of these great men (of whom, many are still contributing today), and their personal direct struggle against agents of the state, they managed to expropriated the greatest and most powerful technology of defensive asymmetrical warfare in the history of mankind from the military-industrial complex and let it out into the world to complete its messianic task.

The meaning of Crypto without the decryption key

Flash forward 30 years, now ‘crypto’ has completely broken out of its militarized cage, and there is no power on earth which can stop it. However, with the spectacular number of ‘crypto’ projects out there, so much noise has been created that the meaning of crypto itself has been lost, and has encrypted the actual meaning of crypto to itself. The apex of this kind of insanity has to be the Facebook’s shitcoin Libera project. Those who are responsible for the most systematic violations of privacy that have ever been conceived or could even be imagined, now want to take those steps further; this under the idiotic guise of ‘crypto’ once again. This is of the greatest ironies because while society may now have all of the radical tools that May theorized about 30 years ago to liberate ourselves from the camps of the state, we have been made blind to the real power that we have access to because of the semantic abyss we have fallen into. Our lack of class consciousness and the historical context that has got us here, has every blockchain bro proudly patting each other on the back, chained to their blocks of oppression in the darkness of Plato’s Cave. As I warned in The Poverty of Tokens, crypto-assets can become a panoptic nightmare of privacy violations when blockchains becomes mutable, pre-mined, non-anonymous. They no longer have any of the majesty, consanguinity, or consensuality of real crypto assets like bitcoin, nor could they ever offer such assurances. Bitcoin can offer these kinds of assurances because it is not asking one to stake proof on trusting the system. Bitcoin demands that everyone check the work and not to trust, but to verify. Satoshi took the hermeneutics of value in the digital age very seriously, and bitcoin is what was produced from that angst. If we are to reclaim the term crypto from its inane semantic dribble (which I am not convinced we should — I think it is better this way), then we must have a deep understanding of the etymology of the word crypto, and how it has been used historically. Crypto has always been about the form of power which is now enshrined within the modren science of cryptography. It has always been about the capacity to conceal, and to hold secrets for oneself, and how such a secret generates power. Crypto is about the whole historical ark of the last 2,500 years in which this written term κρυπτός has been utilized as a tactic of self-protection through concealment. From steganography and the first shift ciphers of Cesar in ancient Rome, to the ciphers devised by Francis Bacon and Vigenère in the middle ages, to crypto’s premier as a full science with Kerckhoffs’s principle in La Cryptographie Militaire; crypto has always been about power! It is a form of power that is created through the concealment of information. It is only in the last century and a half that it has become an explicit material science lobotomized of its origins, purpose, and mysticism to serve only the state, and its great machines of death. Crypto is about the power of privacy, and the form of power that is decrypted when the concealment of information is verified and guaranteed beyond the law of any and all men. But so long as ‘crypto’ remains a vacuous slogan used by every piece of shit blockchain thought up, crypto will continue to be a nascent term concealing its true meaning and its messianic potential.