There is a floor to Bitcoin’s risk less interest rate determined by its mining schedule.

Risk less interest is an income one gets paid in a deal that can not go wrong. This sounds like investors’ wet dream, but there is a real world example of it in the fiat money world, the treasury bonds.

Since the government may print any amount, it will never default on a loan denominated in its own currency. The interest may not have the expected purchasing power, but it is certain that both interest and nominal amount will be paid.

A rational investor would not lend money for less interest than what can be received risk less, hence this rate builds a floor for interest rates for loans of comparable term.

Is it possible to earn risk-less interest in Bitcoins? Yes, e.g. with products that implement the side memory pattern, that I described on the Bitcoin developer list. If someone pays you to lock your Bitcoins to a contract for a time period, then you earn risk less interest. Locking means you forgo the opportunity of spending them until a later time point. The income is risk less since you certainly regain control of the Bitcoins in the future.

What rate of risk less interest should an investor demand in Bitcoin?

Dilution is not insignificant and is compute able thanks to Bitcoin’s deterministic issue schedule. Miners currently earn 12.5 Bitcoins for a block and 6 blocks are expected to be produced in an hour. This means 1,800 Bitcoins are produced every day. These new Bitcoins dilute the value of those already in circulation, 17,929,350 at this moment.

A rational investor should require at least a compensation for this dilution when negotiating an interest rate. Therefore the dilution rate acts as a floor to risk less interest.

Since dilution is deterministic, we may calculate the floor to forward risk less interest rates in the future. I did the work for you for the next ten years. 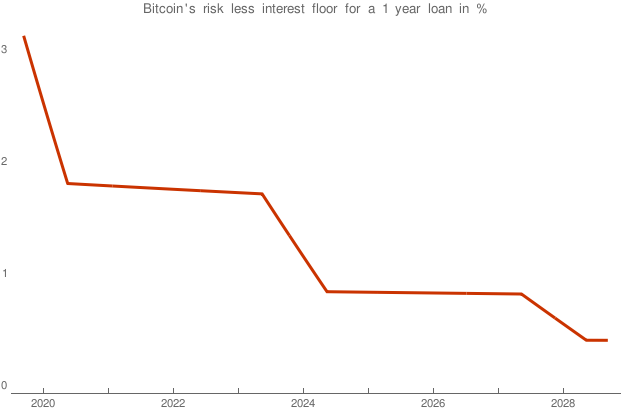