The Bitcoin Diaspora, A Confederation of Tribes

“There is no Bitcoin community” - Everyone

This is the battle cry of true-believers and deniers alike. There is no CEO, PR, or speaker for Bitcoin. Bitcoin is decentralized, so there is none of that. So why do people get triggered so easily when people utter the phrase “Bitcoin community”?

Surely there is something, but what is it?

During Bitcoin’s short existence, it has grown from a small cryptography email list to a globally traded money with a $100B+ market cap. How can something like this happen with no “Bitcoin community”.

Surprisingly, there is “no Bitcoin community” but there is a Bitcoin diaspora, a confederation of tribes.

To fully understand this social phenomenon, we must have a basic understanding of these concepts: diaspora, tribes, specialization and disciplines, and confederation. This will not satisfy all critics, but the aim is to present a mental model we can use when describing all individuals and communities that use Bitcoin.

What is a Diaspora

A quick search on the internet will yield many different definitions for diaspora. Traditionally, the word has been reserved for describing the dispersion of Jews beyond Israel but it is now commonly used to describe the scattering of people away from their homeland.

From the beginning of Bitcoin’s creation, users were geographically scattered but shared a common digital home via the Cryptography Mailing List. 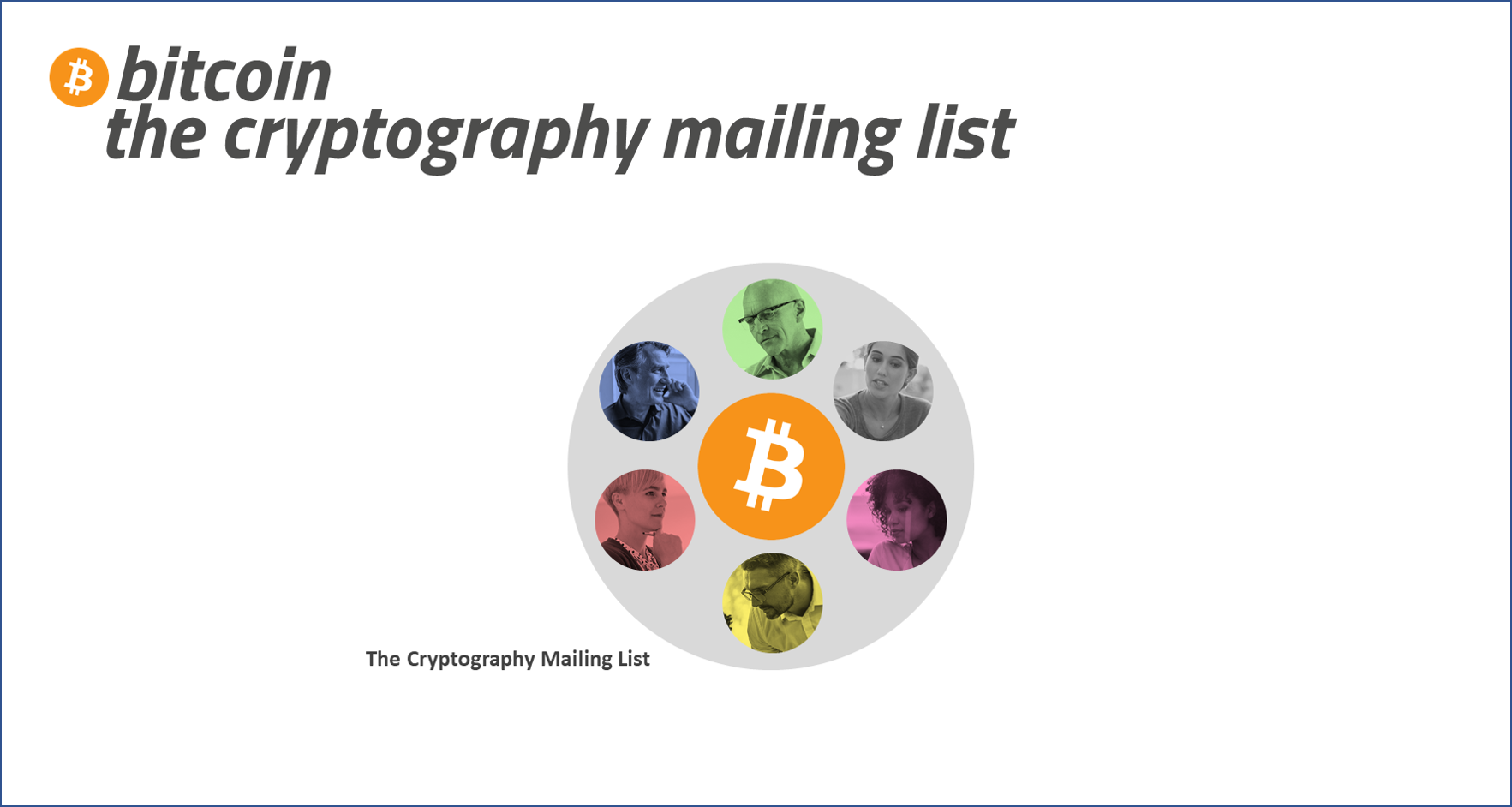 The original cryptography mailing list members eventually scattered to join other digital communities and even made joined communities in the physical world via meetups, conferences, business, and educational institutions. Once Bitcoin users made the jump to connect in the physical world, the Bitcoin diaspora transformed from being digital to a hybrid diaspora, which is a special characteristic of this social phenomenon.

As their numbers grew, so too did the Bitcoin diaspora voice and influence. Finally, a natural tribe would form which we’ll get to in the next section.

A great example of this scattering is their infiltration within Libertarian circles. For decades, Libertarians fought for sound money and more liberty, and for decades they cheered for a return to the gold standard and limited government. Libertarians never had a way to bring change because they needed permission from the state. Then along came Bitcoin. Some core principles of Bitcoin are sound monetary policy and it’s permissionless nature. Diaspora members began to infiltrate libertarian circles and share their domain knowledge of Bitcoin. Libertarians soon discovered those core monetary principles and found they were in alignment with theirs. As a result, we now have a blossoming knowledge base centered around Bitcoin and Libertarianism.

The scattering of the Bitcoin diaspora has resulted in countless physical and digital tribes. As the diaspora continues to grow and mature, we will see more organization and representation.

Tribes come in all shapes and sizes but share common characteristics. Tribes are connected people that share an idea. Tribal needs are communication and a way to share ideas. As tribes mature natural leadership begins to form. Leadership delivers better organization and communication. 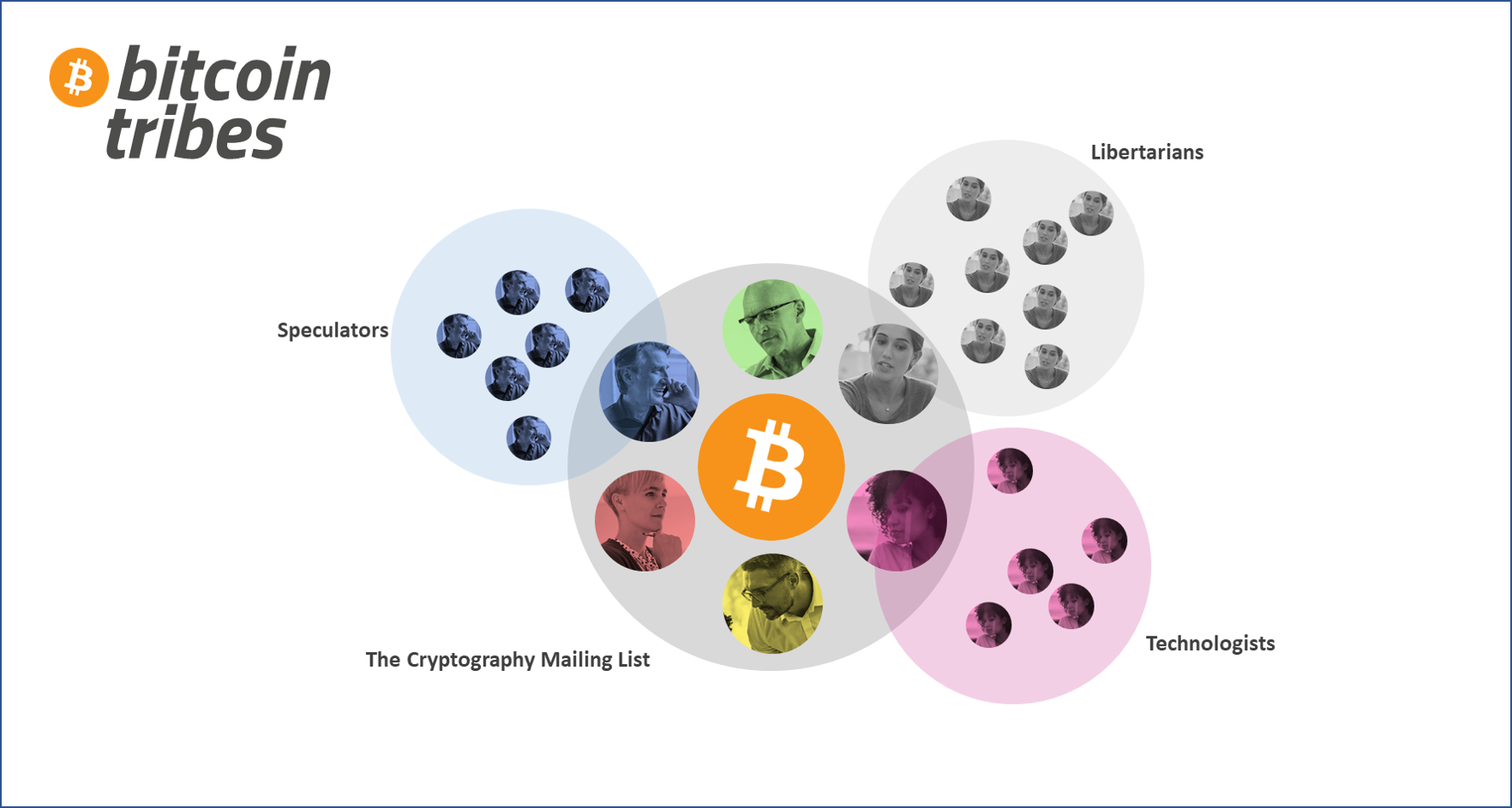 One of man’s most powerful survival mechanisms is to be a part of a tribe. The opportunity to give and to receive from a tribe of like-minded individuals and to learn from a leader give him a sense of fulfillment. But man is not satisfied with one tribe, he desires to be in many. That is why you probably are a member of many social networks, organizations, and smaller groups.

The Bitcoin diaspora began as a single tribe with a small group of members in the Cryptography Mailing List, but naturally, the members shared and explored the idea of Bitcoin. From that moment, tribes began to form groups outside the mailing list.

As mentioned earlier, a popular example of a tribe is the Libertarian Bitcoiners, but there are many more great examples. One of the earliest tribes that are still around today is the Bitcoin Talk forum. This was the early place where Bitcoin ideas were shared and sharpened. Wild speculation, how-to’s, and fud were all hashed out within this tribe. There are more than 30 local meetups for Bitcoin, many developer communities on GitHub, and Bitcoin tribes are forming across every social network.

The expansion of Bitcoin tribes is a powerful example of Bitcoin’s network effects. The scattering is a positive feedback loop as Bitcoin is strengthened as the network grows and tribes grow the network.

When mankind leaps forward, it’s the result of new knowledge. New knowledge is the product of specialization which occurs when productivity is focused along different skills. Since Bitcoin is decentralized, advancement relies on the shoulders of the tribes and tribal members. Since tribal members are free to work on whatever they choose, this leads to more specialization because they can focus their energy where they are most productive.

Within a specific tribe, there is domain knowledge which makes tribes a breeding ground for specialization. Tribal members peer review, share, critique, and advance knowledge specific to their tribe. This process is another example of a positive feedback loop for Bitcoin. Tribes develop specialization, which adds to the overall value of Bitcoin.

Once a person with domain knowledge got their mind on Bitcoin, they tended to see the world through a new lens, and this outcome was specialization.

“I believe that Bitcoin is a mirror - it reflects who you are; it reflects your beliefs.”  Gigi

Domain experts began crafting new ideas and narratives around Bitcoin. Over time, this specialization has led to the deep study and exploration of Bitcoin which has produced various Bitcoin disciplines. Bitcoin disciplines are branches of knowledge dedicated to understanding Bitcoin. 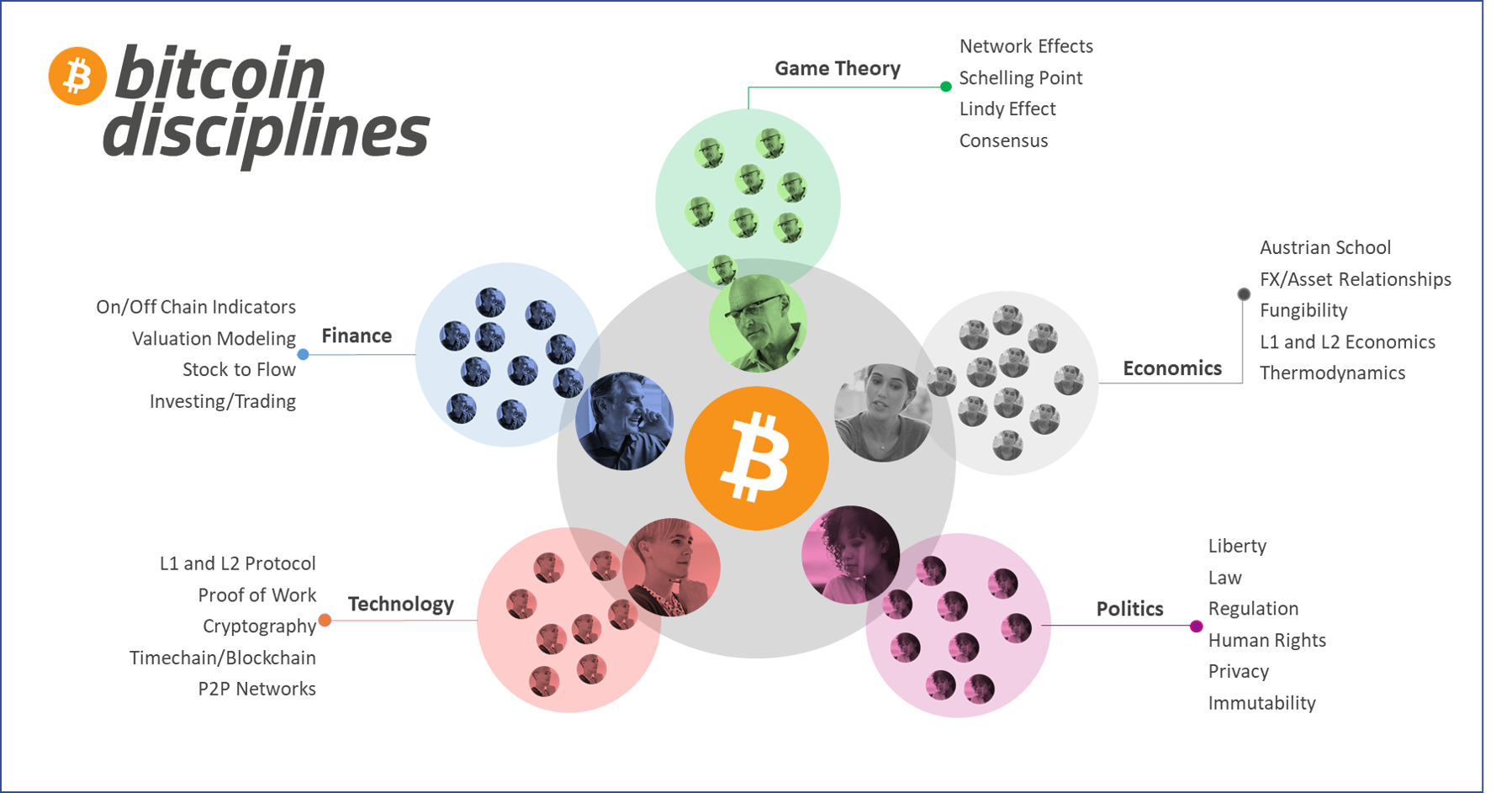 Disciplines are like schools within a university. They encompass an overall idea or school of thought and have deep focus areas that add to the understanding of that discipline. As you can see from the chart, Bitcoin disciplines are developing along conventional schools of thought, however, specialization is developing which further the understanding of how Bitcoin relates to that discipline.

Once the Bitcoin diaspora scattered out beyond the cryptography mailing list, Bitcoin was exposed to people with different areas of expertise. Tribes formed which led to specialization and disciplines. This all happened organically and is another example of how the Bitcoin diaspora is influencing the world.

These disciplines might look familiar at first glance, but once you dig into the writings, code, and other knowledge created, you will find that Bitcoin is changing us far more than we are changing it.

Let’s now dig into the final aspect of the Bitcoin diaspora, confederation. The most useful definition of confederation is an organization that consists of several tribes united in an alliance. History has many examples of tribal confederations from the Iroquois to the Mayans. Each tribe had its values, norms, and leaders, and they found strength in an alliance. 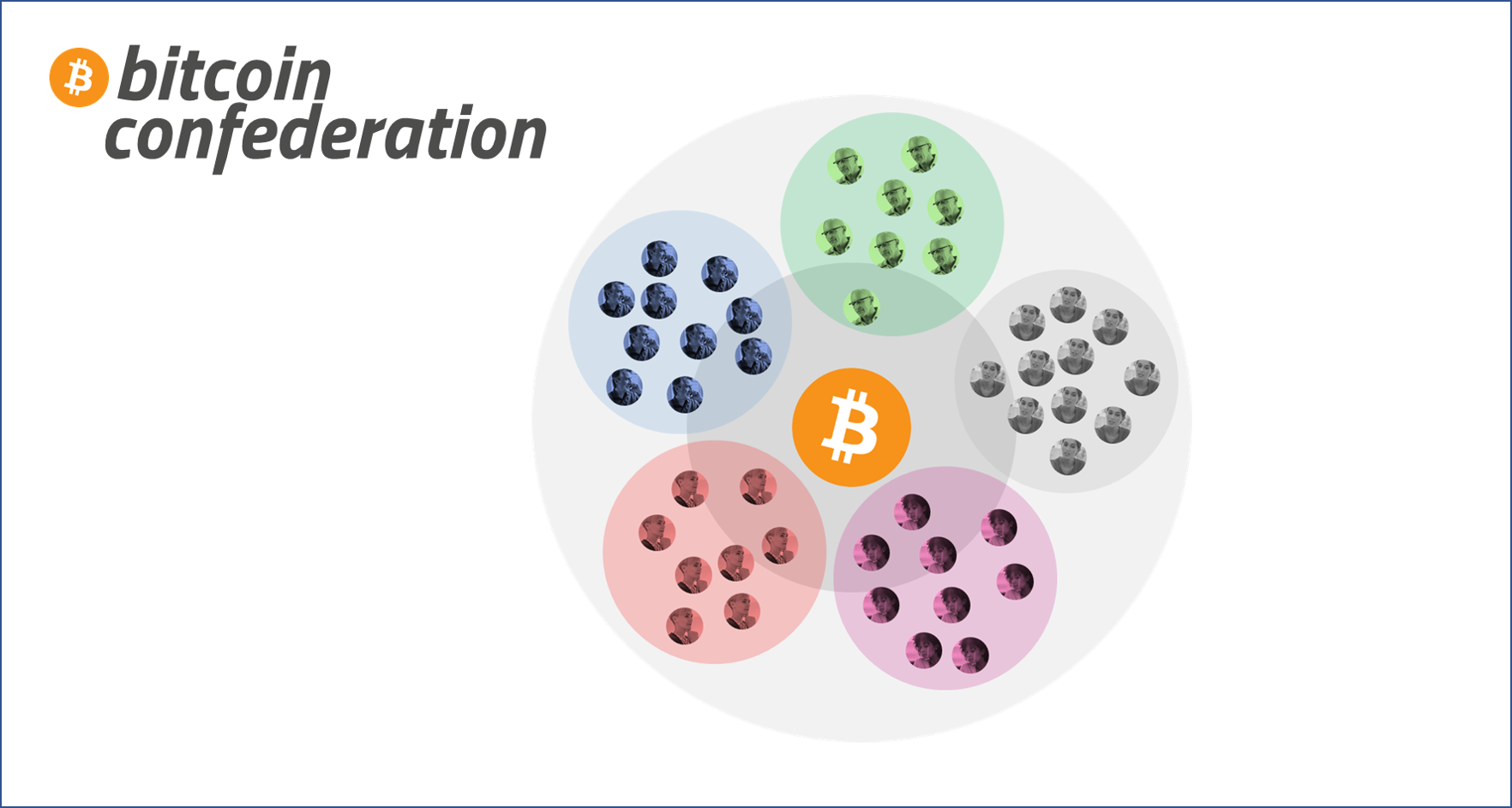 But what forges this alliance? That is the beauty of Bitcoin. It means many things to many people. For some, it is as simple as sound money and for others, it is their path to riches. Interpretation is up to the individual, but it can be summarized as a shared desire for Bitcoin to succeed.

The strength of the confederation is in the tribe and tribal members and vice versa. This is another example of a positive feedback loop.

Through scattering and specialization, the diaspora has spawned many tribes that share ideas, norms, and values, and they all work as an informal confederation.

The Bitcoin diaspora has already changed the world and will continue to bring positive changes to humanity. With each epoch, new waves of innovation and users join the Bitcoin diaspora. As new technology is unlocked, this will bring in more areas of study and new disciplines.

Tribal communication will change rapidly over the next decade as VR and AR technology is brought to the mainstream. Already today, we are seeing primitive Bitcoin meetups in VR. As VR technology is improved, this will unlock new levels of human communication and collaboration. Tribes will continue to meet in the real world, but VR will become more and more common and eventually will be the norm. Better tools will lead to the better communication of ideas and more rapid specialization.

Over the next decade, we will see the creation of many new tribes. Some will be unthinkable because they will be dedicated to technology not yet created. Today, we are witnessing new tribes being developed such as the Bitcoin Artists and the Bitcoin Religion.

There are already Bitcoin Artists, but they are just now getting organized. This tribe is already spreading the ideas of Bitcoin through art and is on the cutting edge of technology creating digital and physical art the world has never seen or imagined.

The Bitcoin Religion is an emerging meme within the Bitcoin diaspora. While this might be laughable to some, this is rapidly becoming a more common idea within existing Bitcoin tribes. As more ideas are created and shared around Bitcoin religion, the tribe will find itself. It too will bring value to Bitcoin through self-betterment.

The Bitcoin diaspora will continue to scatter as Bitcoin makes its way into more and more areas of study and human life. Tribes will organize and the confederation will be strengthened. This will ultimately lead to hyperbitcoinization. 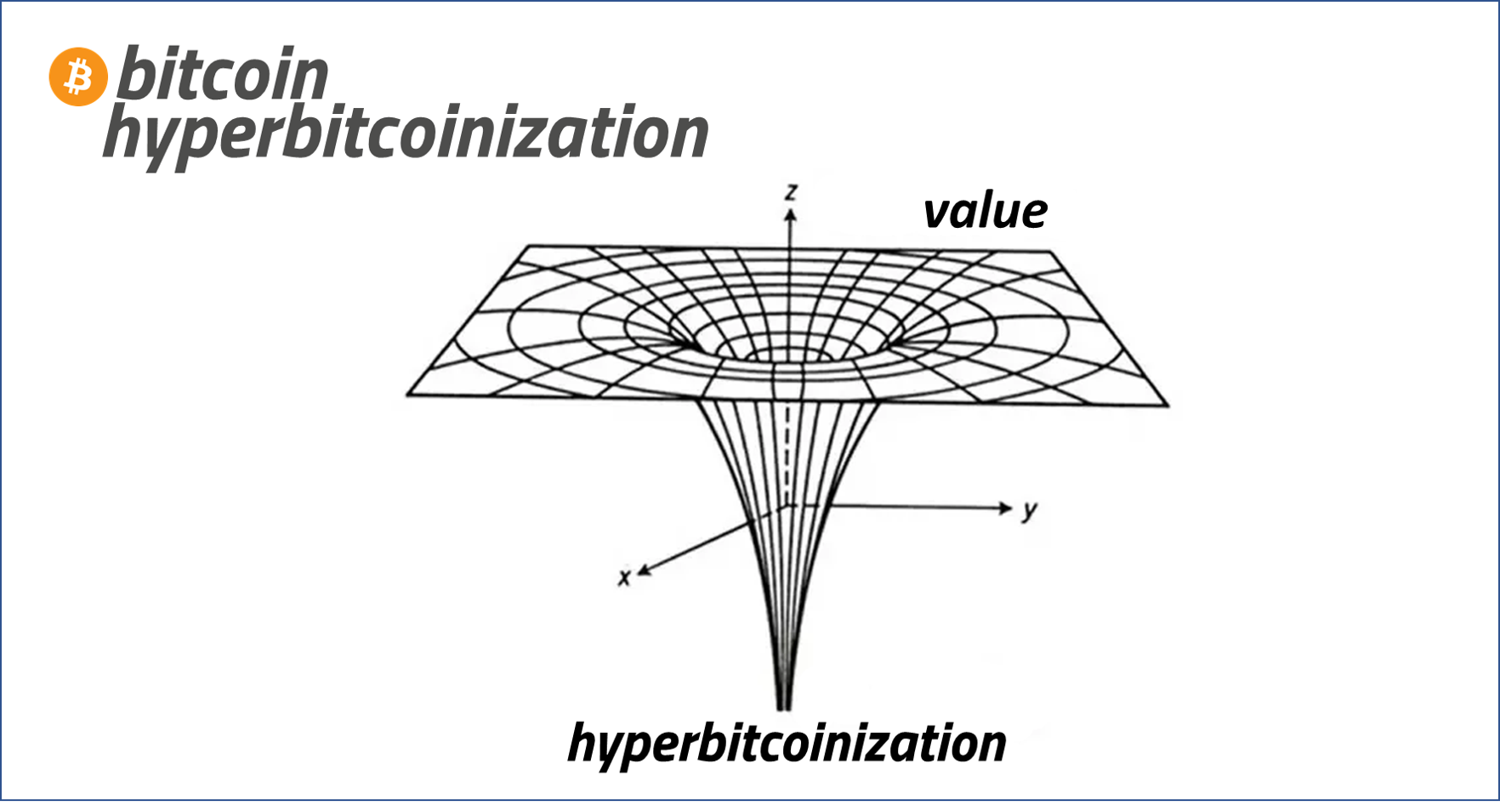 Eventually, we will reach a point of hyperbitcoinization which is when Bitcoin is the global currency. This will trigger a switch in mindset for humanity. Humans will no longer think with shorter time preference. Human action will be shifted from inflationary money as a store of value to deflationary money as a store of value. This will make all human actions weighed with longer time preferences. Once hyperbitcoinization is achieved, the Bitcoin diaspora will be the global human tribe, because Bitcoin will be the global currency.

In the hyperbitcoinization period, there will still be tribes of innovators working to improve Bitcoin and their discipline, but for the common man, it will be an afterthought. The common man will use Bitcoin and act with a longer time preference. He will be changed by Bitcoin. He will become a better man.

Thank you, David, for your early conversation and review. Thank you, Gigi, for your review and encouragement.