Measuring Time with chain of blocks

Miners have to set timestamps of their blocks within some bounds around the recent block times and also the time observed by other network participants otherwise the block will be rejected. Therefore block timestamps loosely follow real time.

The question I investigate here is not the accuracy of block timestamps, but if the number of blocks observed is a suitable measure of time.

The variance of the stochastic mining process gives us a bound of precision we can expect, the other two will make matters even worse.

Since mining is a progress free guesswork its time to success is exponentially distributed with a mean of 10 minutes. Below an illustration of the probability that the network finds a block within some time span: 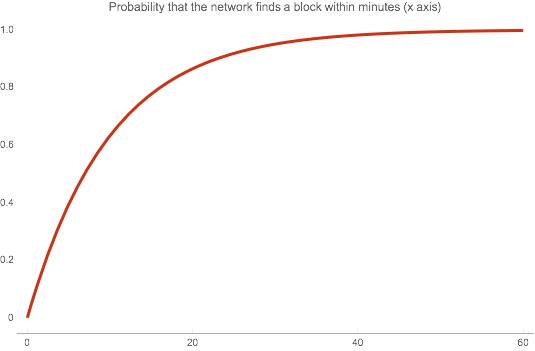 Fun fact: The probability to find a block within 10 minutes is not 0.5, but much more: 0.63. The mean time to success is 10 minutes, but its probability distribution is not “symmetrical” around that, since it assigns non-zero probability any long wait time.

The standard deviation of the success distribution is also 10 minutes therefore we should not expect the time measurement to be more precise than that. Reality is likely worse. Let’s see how bad.

This should not surprise us since Bitcoin’s mining difficulty was skyrocketing during its first 10 years, due to ever increasing mining capacity and consequently faster than target block production.

A block on the chain had to be created after its predecessor, since it had to include the previous hash into its computation. Therefore the work spent for a block was sequential to the work spent for the previous one. The progress of the chain of blocks is therefore result of sequential calculation even though the calculation for the individual block is highly parallelizable.

Producing n blocks requires computation that is expected to take n*10 minutes in total. The difficulty adjustments based on timestamps are only there to periodically adjust for measurement errors, the actual tool of time measurement is the computation itself.

If the hardware that executes the computation was known and constant then there would be no need for a difficulty adjustment.

Any inaccuracy of the bitcoin clock in excess of the variance implied by the stochastic nature of mining is attributable to fluctuation of the network’s computing capacity and inaccuracy of block timestamps.

It is impossible to quantify the inaccuracy introduced by incorrect block timestamps as no one has an objective record of the time points the blocks were really created. The inaccuracy is however limited through this source as Bitcoin nodes reject to append a block with a timestamp more than two hours ahead of their own system time.

Incorrect timestamps lead to incorrect estimation of network computation speed. There is potential but never observed and soon to be fixed “time warp attack” on Bitcoin that could multiply the effect of incorrect timestamps. This source of inaccuracy had negligible effect on difficulty adjustments in the past and will be even less significant in the future.

The network however regularly underestimated its own computing speed. 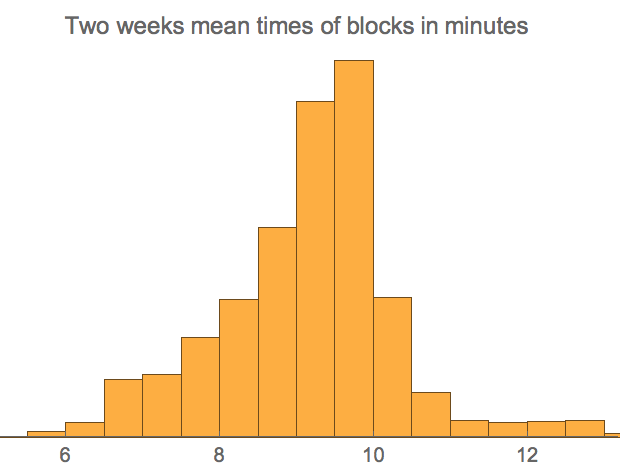 Number of blocks produced is a proxy for the time passed, but this clock is severely skewed on the long run and highly imprecise on the short term. It is really bad, but still the best unforgeable time measure we have.