Bitcoin Is a Cult, Fiat Is a Religion 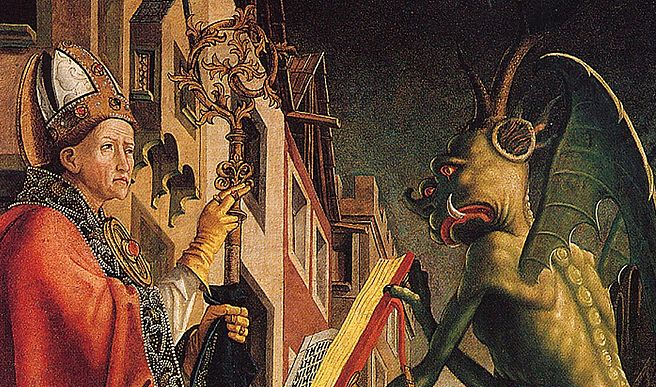 Frances Coppola, a long time critic of Bitcoin, declared that “Bitcoin is a Cult”, which predictably stirred a lot of shit posting and ruffled feathers. Many Bitcoin’ers were offended by this declaration, resulting in name calling and ad hominem attacks, which ironically proved Coppola’s points. Bitcoin is a cult, and no cultists likes to be pointed out as a cultist. She is not the first to point out this fact, others have said the same thing.

The cult label can be seen as a pejorative but I will attempt to explain here how it is a perfectly reasonable and necessary description of Bitcoin. A cult is just a religion with limited membership status and social acceptance. Musician Frank Zappa cleverly stated that “the only difference between a religion and a cult is the amount of real estate they own”. So if Bitcoin is a cult, fiat money is a religion. 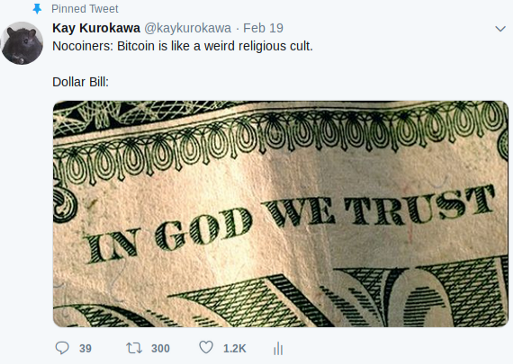 To demonstrate this point, I created the above meme which people really seemed to like. I believe this meme was popular because people are subconsciously aware of the religious nature of money. The fact that American paper money contains the phrase “In God We Trust” in capital letters is a confirmation of their awareness. It is only through faith that a piece of paper turns into some thing of value. In the modern age, it is a faith so firm and unshakable that it makes Jesus look like a second rate deity.

Once ideological faith has taken complete hold of an individual, the individual is no longer aware that he believes. A true believer does not see his ideology as an ideology, and divine facts are just facts. They do not practice religion, they practice the truth. Or as Marx would say of someone who is under the spell of a powerful ideology: “They do not know it. But they are doing it.” (he is talking here about the ideology of capitalism). It is through this ideological lens that people are able to declare Bitcoin as a cult. It is akin to a Catholic declaring Mormonism a cult. Such ignorance can only be achieved when you have been ideologically compromised to accept your own ideology as the plain truth. Bitcoin cultists also suffer from the same syndrome when they reject the cult status of Bitcoin, while at the same time participating in carnivore dinners, and engaging in emotionally charged social media attacks against heretics.

Readers may be skeptical of the intrinsic connection between money and faith. When we pay our electricity bill or buy some food at the grocery store, we do not feel any special connection to the divine, nor do we feel that we are practicing some religious activity. But yet, the foundations of our economic lives are directed by an object which only exists in the mind. Even though fiat money is just a piece of paper, or digits on a bank’s computer, we devote our daily lives in pursuit of it. We do not know it, but we are doing it. We place an enormous amount of faith in our money, without knowing it.

Philip Goodchild writes in Theology of Money, that “All religion, in essence, direct and distribute time, attention, and devotion. Religions enrich life by establishing patterns for living.” Does money not have the same effect ? Is money not the method in which our modern capitalist society direct and distribute time, attention, and devotion? If this is indeed the purpose of money, than the question of what money should be is inherently a moral, ethical, and political question. The answer to such a question cannot be monopolized by economists masquerading as scientists, for the answer we seek is not scientific in nature. We are not measuring the effects of physical phenomenons or proving a mathematical theorem. We are not mere automatons in a system designed to optimize GDP, employment numbers, and trade surplus.

If we define money as the method in which society direct and distribute time, attention, and devotion, than that means any attempts to redefine money is inherently a political activity rooted in an ideology of how society should be structured. Given how radically opposed Bitcoin is from the prevailing modern fiat system, there is no way for Bitcoin to succeed without true believers. True believers will be at the front lines in a fight against the inquisitors of the fiat system, who will do everything they can to to keep their money printable and censorable. These two properties of the fiat system are the cornerstones of the modern capitalist society. By presenting an alternative, Bitcoin is not only challenging a prevailing ideology, it is challenging the established hierarchy and power structure that has been constructed around it.

Those that believe that this fight is not coming, either misunderstands the above stated fact, or is overestimating what Bitcoin as a technology can achieve. They erroneously believe that “blockchain technology” magically secures itself and can autonomously impose its own will on society without human intervention. As Eric Voskuil writes: “Technology is never the root of system security. Technology is a tool to help people secure what they value. Security requires people to act. A server cannot be secured by a firewall if there is no lock on the door to the server room, and a lock cannot secure the server room without a guard to monitor the door, and a guard cannot secure the door without risk of personal harm. Bitcoin is no different, it is secured by people who place themselves at personal risk (Risk Sharing Principle).”

Bitcoin can only succeed as a cult for all money is a religion. It is only when Bitcoin has won that it will shed its cult status. When Bitcoin becomes a religion, as fiat is now, we will no longer be aware that we are believing. One Bitcoin will simply be one Bitcoin, and one dollar will be a memory of an irrelevant and dated ideology.