Bitcoin is more like ham radio than the early internet

People in the bitcoin community often make fun of me as a nocoiner. That is, I don’t have any bitcoins and am vocal about that fact. (Neither of which is true, by the way).

The truth is that I have no problem with bitcoin. It is a solid protocol that has survived handily for eleven years. When I come off as being critical, it’s usually because I’m attacking the various narratives, or fan fictions, that have sprung up around bitcoin. Don’t get me wrong, all movements rely on some sort of internal mythology to help drive their progress. Bitcoin is no different in this respect. But there is a big difference between accurate self-perception and fantasy.

Bitcoin’s wrongest narratives are its triumphal ones. Most of them paint bitcoin as some sort of heir apparent, waiting on the wings to inevitably replace regular money: Bitcoin is the internet in 1991, just on the cusp of mass adoption… Bitcoin is email… Hyperbitcoinization is one year away… Bitcoin as monetary revolution…etc. I’m sure you’ve run into these proclamations.

No, bitcoin isn’t going to become a mainstream kind of money. It’s too awkward for most people. Crazy price gyrations are far too wicked for the regular money-using public to tolerate.

Nor should bitcoiners want bitcoin to go mainstream.

If five years from now everyone in the world has become a bitcoin user, that could only be because something very very bad has happened to the regular monetary system. Perhaps hostile aliens have enslaved us and are using the payments system to control what we can buy, sort of like Margaret Atwood’s Compucounts in her dystopic Handmaid’s Tale. And so bitcoin has gone mainstream, but only because we have all been forced to become under-the-table bitcoin users in order to buy stuff we need. 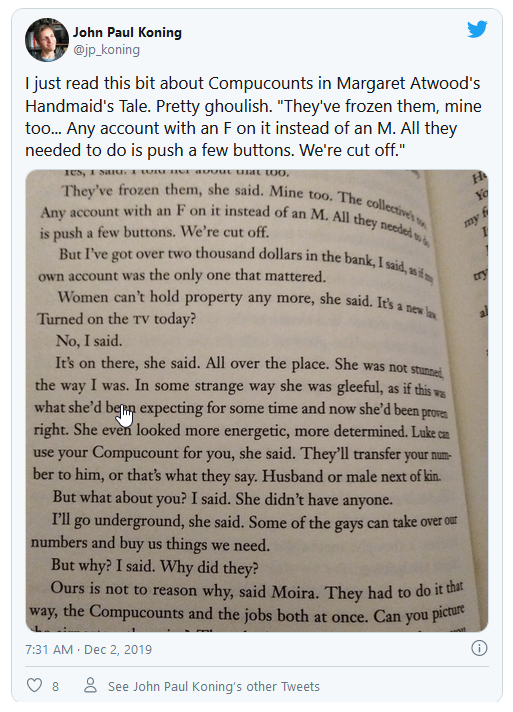 Surely no bitcoiner would actually want such a dark future.

I think the ham radio community provides bitcoiners with fertile ground for cultural appropriation. As I suggest in my recent Coindesk article, Bitcoin and ham radio are quite similar. They are both clunky and old-fangled. Neither technology is particularly easy to use relative to more mainstream options: ham radio’s user experience is trumped by Whatsapp’s, and Zelle is smoother to use than bitcoin. Go to Youtube an you’ll find thousands of videos explaining how each technology works.

The very feature that makes both ham and bitcoin so confusing is also its strength. They are both decentralized. That is, neither relies on a single omnipresent service provider. Rather, the actual user is 100% in charge of operating the tool. No account necessary. This lack of a gate keeper means that there is no one to soften the user experience. It also means that no one can be excluded from broadcasting a radio message, or transferring some bitcoins. That’s a neat feature.

The ham radio community seems to be quite comfortable with its nicheness. Ham radio operators don’t huddle together and talk about “overthrowing the totalitarian system of smart phones” or “displacing evil email.” There is no ham radio fixes this meme on twitter.

And no wonder. If ham radio were to have gone mainstream by 2025, it would only be because some sort of massive natural disaster, say a meteor strike, has crippled all other forms of communication. No sane ham radio operator would wish this sort of doom scenario on the world.

When I was researching my Coindesk piece, I learned that there is a large community service element to ham radio. Hurricanes and other natural disaster often knock out cell phones and 911 call centres. As a robust decentralized communications network, independent ham radio operators become first responders. They locate desperate people and relay their needs on to emergency care providers. For instance, in the image below ham radio aficionado Josh Nass aka KI6NAZ is doing rounds of his neighborhood to see if any families have been knocked out by a (mock) disaster. 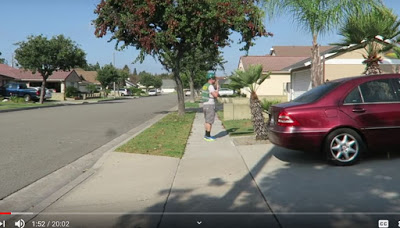 I really liked the ethos that Josh stands for. It’s warm and cuddly and heroic. There also seems to be a good dose of humility among ham radio operators. The community thinks of itself as a group of civic-minded hobbyists, not revolutionaries on the cusp of tearing down the system.

Perhaps bitcoiners can learn from this. A hobbyist mentality is required to learn all the obscure things one must do with one’s bitcoins: how to custody one’s own keys, make bitcoin transactions, run a node, and set up Lightning. Between kids and jobs, most people won’t have the time. Or maybe we’re just lazy. When the regular monetary & payments system is compromised, say Visa or Zelle or Swish have gone down, perhaps these bitcoin hobbyists—like their ham radio cousins—can leap into action and help others by enabling them to route transactions around the blockages.

Better this sort of narrative than to be fooled by fantasies saying that bitcoin is destined to rule the world. In the long run, bad narratives lead to disillusionment, and disillusionment kills a movement.

To sum up, bitcoin isn’t the next email. It seems more akin to ham radio, a civic-minded and wonkish hobby that comfortably exists alongside its more mainstream centralized cousins. When the regular payments system suffers from a rare interruption, that’s bitcoin’s turn in the spotlight. But when regular service is restored, it becomes a hobby again. And that’s fine.