The Bitcoin community has been abuzz for a few years about bringing Schnorr signatures to Bitcoin. Since then, the idea has evolved into three formal Bitcoin Improvement Proposals: ‘BIP340 — Schnorr Signatures for secp256k1’, ‘BIP341 — Taproot: SegWit version 1 spending rules’, and ‘BIP342 — Validation of Taproot Scripts’. Respectively, they define a standard for Schnorr signatures in Bitcoin, introduce the Taproot construction, and formalize the new Script v1 instruction set. Taproot also iterates on the previous proposal of Merklized Alternative Script Trees (MAST).

There are two ways of spending a pay-to-taproot (P2TR) output. The first way is called key path spending. P2TR funds are locked to a single public key with the full output script amounting to _‘

The second way of spending a P2TR output uses one of the Taproot leaves. We call this script path spending. First, the existence of the leaf needs to be proven which is done by revealing the inner key, the Merkle path to the Taproot leaf, and the script encoded in the leaf. Then, the spending conditions of the leaf’s script are fulfilled.

The remainder of this article explores the input costs of 2-of-3 multisig Taproot constructions. Some familiarity with the details of the proposals is helpful. Check out the Taproot overview and the excellent summary of the three BIPs by the Bitcoin Optech Group if you are looking to refresh the details.

Classically, a 2-of-3 multisig address is constructed in the form of a pay-to-scripthash (P2SH) output of the form _‘2 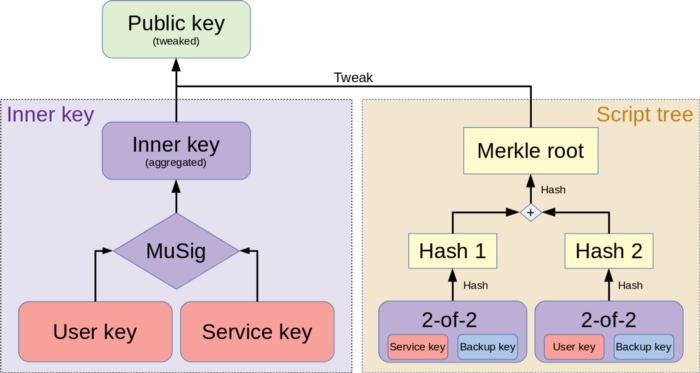 The most likely spending option with the two hot keys is encoded as an aggregated key in the key path. The two backup spending options are put into leaves of the script tree.

In the general case, all parties agree on a course of action and collaborate to use the key path. This is the most cost-effective way to spend a P2TR output and allows multiparty spenders (and other complex spending conditions) to be indistinguishable from single-sig spenders.

An input commits to a specific unspent transaction output (UTXO) which is defined by the transaction that created it and the position in that transaction’s output list. The UTXO entry provides the spending conditions to be satisfied by the spender. An nSequence field allows encoding replaceability, and the witness provides the spender’s authentication. In the case of the key path this is a single Schnorr signature which in some cases may actually consist of multiple aggregated signatures.

When a fallback to the backup key is necessary, the existence of the Taproot tree must be revealed. If there is only a single leaf, the spender provides only the inner key. Tweaking the inner key with the hashed leaf results in the public key. In sum, the data necessary to prove the existence of a script path is called the control block.

In case of two leaves, additionally the first hashing partner for the Merkle path must be revealed:

The below costs are in addition to the above costs of spending via the key path.

When the backup key is on a networked system, e.g. an HSM, and can participate in a multi-roundtrip signing process, we can make use of MuSig to aggregate the two public keys.

Construction with 2-of-2 OP_CHECKSIG (cold backup key, no MuSig)

In the case that the backup key is offline and a human would have to make multiple trips employing USB sticks or QR codes, saving roundtrips may take precedence over saving a few bytes. Instead of an aggregated public key, we use a non-interactive multisig construction.

It turns out that a single 2-of-3 leaf in lieu of the two 2-of-2 leaves is both more costly and less private. 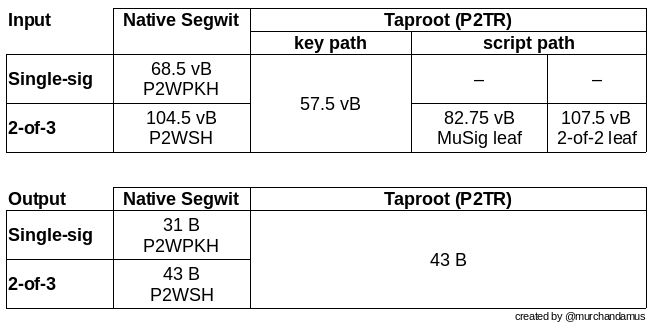 Upper bound of input and output sizes for single-sig and 2-of-3 multisig.

The described 2-of-3 multisig scheme achieves input sizes of 57.5 vbytes for a key path spend, 82.75 vbytes for the leaves using a hot backup key, and 107.5 vbytes for non-interactive backup spends. This results in a fee reduction by 45% for 2-of-3 inputs when switching from P2WSH to P2TR spending. In the uncommon case of a recovery transaction, the cost is negligibly increased for cold keys. Single-sig users are also incentivized to switch to P2TR as they save 11 vbytes on each input — the output cost is externalized on the sender.

Thanks to Gloria Wang.