Hasu is an independent cryptocurrency researcher. Nic is the.

– Walt Whitman, Song of Myself

Perhaps the most enduring source of conflict within the Bitcoin community derives from incompatible visions of what Bitcoin is and should become. Businesses building on Bitcoin, believing it a cheap global payments network, eventually became nonviable when blocks filled up in 2017. They weren’t necessarily wrong, they just had a vision of the world that ended up being a minority view within the Bitcoin community, and was ultimately not expressed by the protocol on their desired timeline.

In the absence of a recognized sole leader, Bitcoiners refer to founding documents and early forum posts to attempt to decipher what Satoshi truly wanted for the currency. This is not unlike US Supreme Court justices poring over the Constitution and applying its ancient wisdom to contemporary cases. Others reject textual exegesis and focus instead on a pragmatic analysis in context.

Conflicts within Bitcoin thus arise from entities who hold visions of the protocol that are mutually exclusive — and this leads to friction when these visions cannot be reconciled. Visions of Bitcoin are not static. Technological developments, practical realities and real-world events have shaped collective views. This post is an attempt to aggregate the various dominant narratives that have characterized Bitcoin throughout its 9-year history. This post builds on excellent prior work by Murad Mahmudov and Adam Taché, and we suggest you add that to your reading list.

Here, we want to more granularly explore the prevalence of key narratives. We identify seven distinct major themes that have held positions of prominence among Bitcoiners throughout its history. Note that these do not necessarily have to be the most influential narratives — we are instead focusing on major strains of thought that have characterized Bitcoin users.

In rough order of appearance, these are:

In the chart below, we’ve weighted these various narratives according to their popularity at the time. 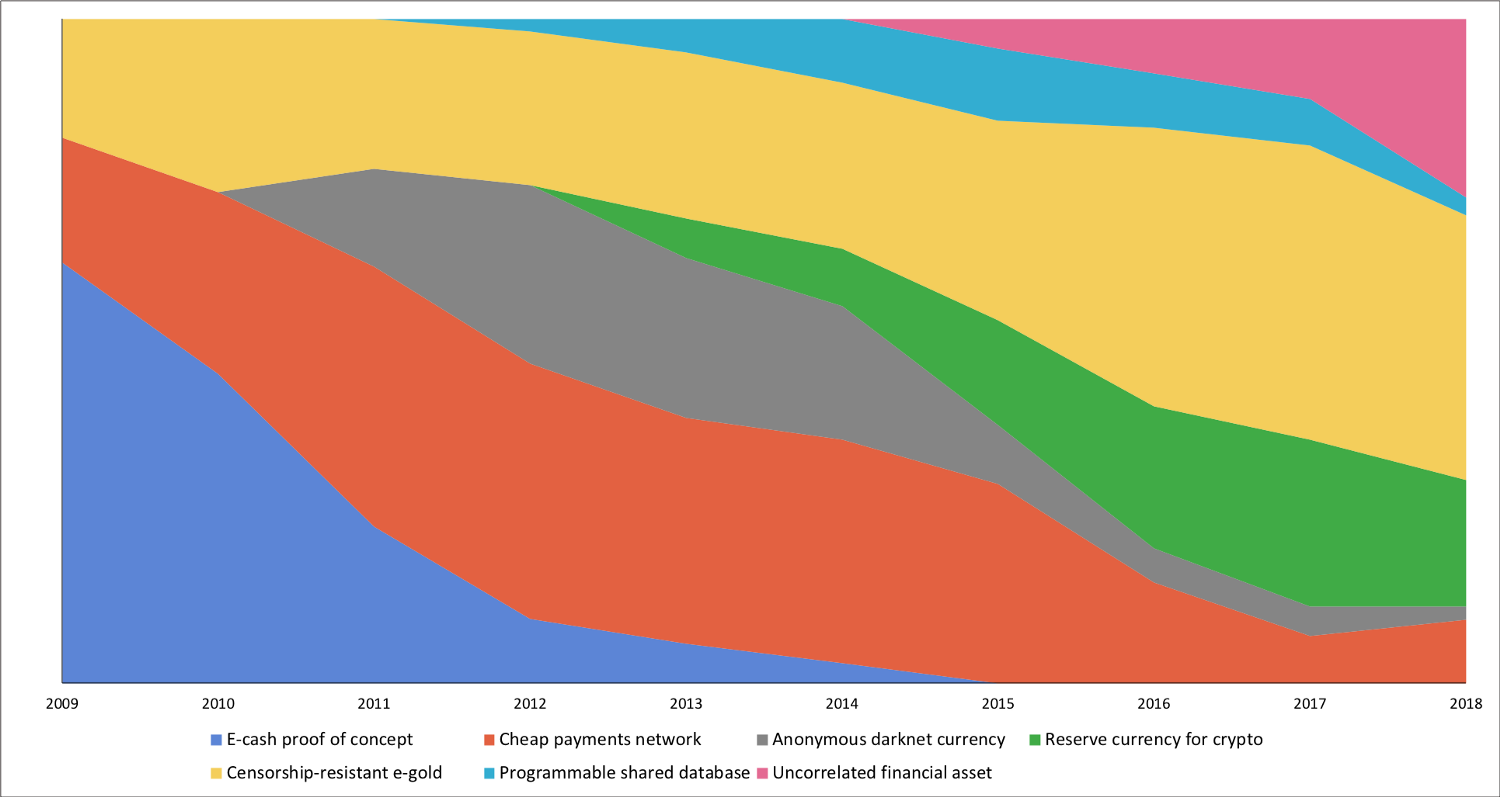 In this chart, we lay out the relative influence of the seven narratives we identified above. As you can see, the e-cash proof of concept was the dominant view at the start, although the p2p payments network and digital gold views were also espoused at the time. Later, Bitcoin as an anonymous darknet currency gained steam with the Silk Road. The idea never really died off, and Bitcoin is still used on the darknet today, even though other privacy-oriented alternatives exist.

As ICOs were invented and a broader market of altcoins began to proliferate, BTC became the reserve asset for that larger economy. This grew to become a significant feature of Bitcoin, especially in the bull markets of 2014 and 2017. We note that the p2p payments contingent remained influential until mid 2017, when they largely migrated to Bitcoin Cash (some had already left for Litecoin and Dash). However, with the emergence of Lightning in 2018, there has been an upswing of enthusiasm for online microtransactions and fee-less internet payments.

In 2015 and 2016, sidechains became a popular talking point, and it was assumed that Bitcoin would soon boast a much-expanded functionality, obsoleting most altcoins. Related functionality-extending projects like Mastercoin (now Omni), colored coins, Namecoin, Rootstock, Blockstack, and Open Timestamps, contributed to this general view. However, as sidechains proved complicated to implement, non-money uses of Bitcoin fell out of favor.

As Bitcoin emerged from the 2014–15 bear market, analysts began to contemplate its status as a differentiated commodity-money. In November 2015, Tuur Demeester published an investment note entitled “How to Position for the Rally in Bitcoin,” arguing that it had unique characteristics as a portfolio asset. In mid-2016, Burniske and White influentially argued that Bitcoin represented an entirely new asset class. These analysts noticed Bitcoin’s stubbornly low correlations with traditional assets, and as this persisted, Bitcoin as a portfolio diversifier gained steam among certain forward-looking corners of the asset management industry. Today this is a popular view, driving much of the demand for financial products which would give traditional investors exposure to Bitcoin.

Throughout all these regimes, the digital gold conception has remained influential, and now is the consensus view, predominating over the p2p petty cash faction, which largely departed with Bitcoin Cash. Today, after years of strife and infighting, this is the majority view. However, not all Bitcoin users are ideological bitcoiners, and wanted to reflect this in the chart. Many Bitcoin holders hold it as a portfolio diversifier, some still use it for anonymous darknet transactions, and the p2p cash contingent has re-emerged alongside Lightning.

If you scrutinize the above chart, you’ll notice that some of the visions of Bitcoin are entirely incompatible. For instance, a move to a global on-chain payments network conflicts with the digital gold view, as emphasized by Spencer Bogart. We’ve depicted the conflict between these views of the world by isolating them on this chart.

The conflict really began to be fought seriously with the release of BitcoinXT in 2015, although rancorous discussions had long preceded that. Further provocations including Bitcoin Classic, Unlimited intensified the conflict. It reached its peak in mid 2017 when Bitcoin Cash finally forked. During the bull run of late 2017, Bitcoin fees reached extreme levels, leading to defections to the Bitcoin Cash camp. However, since then, fees have settled down and the need for big blocks appears less urgent.

Additionally, in early 2018, Lightning implementations became viable, and micropayments with Bitcoin emerged. Thus, the tension dissipated, as both camps were able to pursue their own objectives. We noted an uptick in the cheap payments school of thought from within the Bitcoin crowd in 2018, as there has been a resurgence of optimism for payments through second-layer solutions.

An interesting conclusion that we think can be drawn from the analysis is that Bitcoin is currently benefiting from a rare period of relative harmony. While there is no single view that entirely dominates, the digital gold narrative is certainly most prevalent right now. The civil wars of 2015–17 ended with the Bitcoin Cash fork, and migrations to other p2p payment factions like Litecoin, Dash, and Nano. For now, the tension seems to be largely resolved, and we find ourselves in an unusually placid era in Bitcoin’s history. Subjectively, it appears that under this comparatively peaceful regime, development seems to be progressing more rapidly. Endless social media battles, conference-driven agreements, and positioning for contention forks certainly created a drag on developer efforts. There is another battle looming, however.

As depicted in this chart, the anonymous and fungible vision of Bitcoin (generally preferred by the digital gold camp) is somewhat at odds with the financialised, transparent version which is growing in popularity. Individuals that want exposure to Bitcoin the financial asset tend to prefer a Bitcoin which is compatible with AML/KYC and tend to put a lesser emphasis on privacy or fungibility. Many pundits believe this will be the next bitter fight for the soul of Bitcoin.

Ultimately, both the conflict and the peacetime phases are important. Conflicts reveal where power structures reside, and tend to yield informative signals about how key stakeholders truly feel. Under duress, business, individuals, and developers are forced to take sides, revealing their genuine preferences for the development of the protocol.

We are aware that much of our analysis relies on our subjective interpretation of old BitcoinTalk posts. If you disagree, we welcome you to suggest an alternative. To make subsequent analyses easier, we’ve put together a timeline of key Bitcoin events, tracking its entire history. (We drew heavily on the 99bitcoins annotated price chart to make this.) We recommend considering our colorful ‘changing tides’ chart alongside the below timeline. The juxtaposition should help elucidate why exactly we made the decisions that we did.

We put together the changing narratives chart through an analysis of BitcoinTalk posts, a set of discussions with Bitcoiners who had been there from the very start, a healthy respect for Bitcoin history, and a recollection of major attitudes over the years. Anyone who has been around Bitcoin long enough should be able to perform a similar analysis.

We’re not positing our analysis as the absolute truth. Instead, we want to nudge Bitcoiners away from absolutism and acknowledge that major narratives within the Bitcoin community have changed over time. And that’s ok — it’s appropriate to change your mind in response to new data. Purity tests are generally weak, since they tend to require that individuals do not evolve. But if most Bitcoiners went back and contemplated their own past histories, they would probably find that they evolved over time, too. Both of the authors have certainly been through the cycle.

In the end, a healthy respect for Bitcoin history is a necessary starting point of any attempt to define it. It is not unitary, and Bitcoiners are not ideologically homogenous. Bitcoin contains multitudes, and it’s important to remind ourselves of that.

Thanks to Dan McArdle and Murad Mahmudov for the input.