Tweetstorm: No one person runs the internet

No one person, company, organization or government runs the Internet. It’s a globally distributed network comprising many voluntarily interconnected autonomous networks. It operates without a central governing body with each constituent network setting/enforcing its own policies. 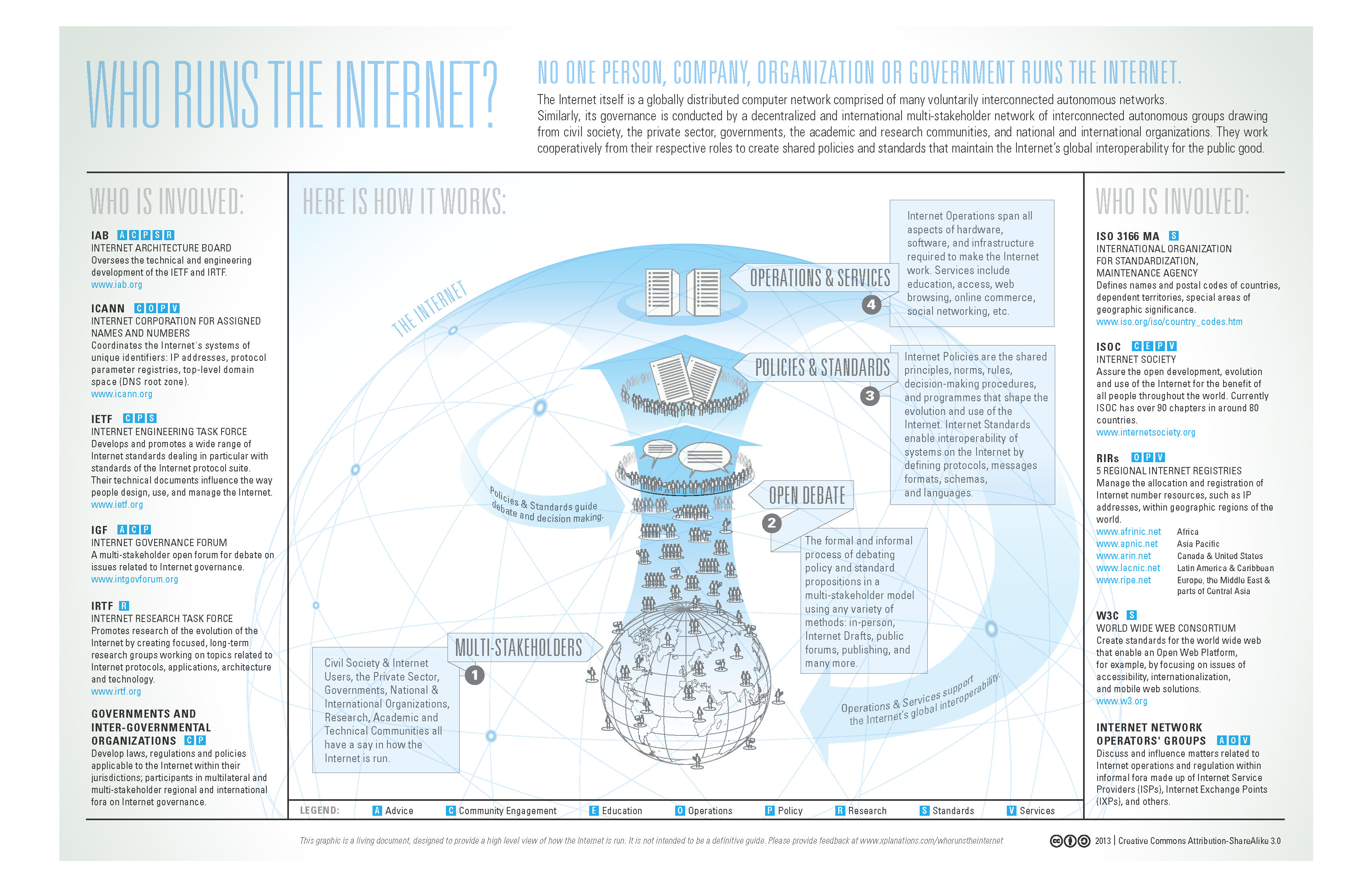 Its governance is conducted by a decentralized and international multistakeholder network of interconnected autonomous groups drawing from civil society, the private sector, governments, the academic and research communities and international organizations https://en.wikipedia.org/wiki/Internet_governance

This means if you run your own ISP (i.e. an Internet “full node”), you get to decide how traffic flows across your own network, and you can also participate in Internet governance… but that’s just boring stuff like how IP addresses and domain names get allocated and delegated.

The “link layer” control (your ISP’s physical connections are Layer 1 and Layer 2) and “Internet layer” governance (ie TCP/IP protocol is Layer 3 and Layer 4) aren’t super interesting. But, using P2P networks and cryptography, anyone can create their own Layer 5 virtual network

For example, a centralized VPN, a distributed network like Tor, or Bitcoin’s P2P network are all Layer 5+ protocols, that each have their own governance models. But because of the cryptography used they have security and privacy which allows for freedom and censorship resistance.

This is how Bitcoin is self-sovereign, how you can pirate movies over Bittorrent protocol, how darknet markets exist, etc. Layer 5 virtual networks can make their own rules - P2P networks + cryptography gives everyone freedom and allows anyone to be a self-sovereign “virtual ISP”

So the real power of the Internet isn’t in the “base layer” of running your own ISP with fiber, routers, and servers, it’s all in the upper transport and application layers - Bitcoin is both of these, combining cryptography with a P2P mesh network so everyone can run a full node.

Then! Once we consider the Bitcoin P2P network as a “transport layer”, and start building on top of Bitcoin, the Internet really starts to get interesting. Bitcoin gives us a base settlement layer for freedom of financial transactions and BTC, soon to be the world’s hardest money

The most important application stack in our generation will be built on top of the Bitcoin middle layer. Simple apps like Lightning, Bisq, and BTCPay, all routed over Tor, allow you to become your own ISP, your own bank, your own exchange, and your own payment processor. Fuck KYC

With just a few simple free apps running on a humble Raspberry Pi, anyone can be completely anonymous, have perfect privacy, and ultimate freedom. This means anyone can bypass all governance rules, including your favorite country’s government as well. Internet + Bitcoin = Freedom