Every week I write about the news that matters for Bitcoin. You can read and subscribe to my newsletter for free right here: http://rhythmofbitcoin.substack.com 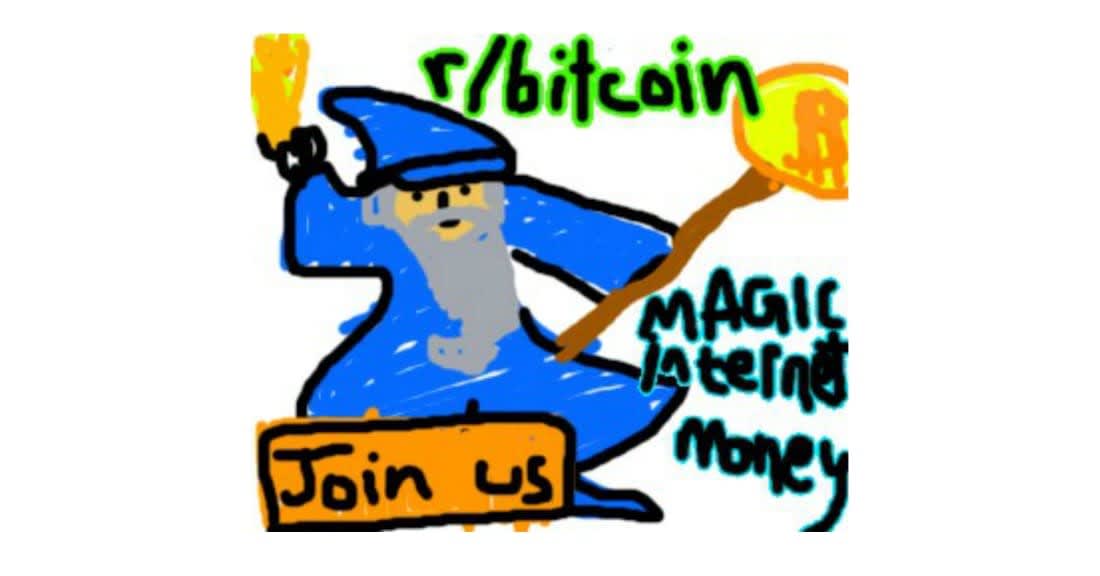 There may not be a more perfect representation of Bitcoin and its early community than this drawing created in Microsoft Paint, portraying a wizard in a blue cloak holding a staff with the slogan “Magic Internet Money”. The illustration was created as a promotion to entice users on Reddit to learn more about the currency and join the Bitcoin specific forum. Its reception was overwhelmingly well-received, and in part, helped build Bitcoin’s brand awareness. When the advertisement went live, the community consisted of a little over fifty thousand subscribers and the price of bitcoin was still under three hundred dollars. For reference, the same forum is currently 1.2 million users strong. There were even almost 600 comments discussing the promotion and drawing itself. The thread is filled with Bitcoin users tipping other users with the “magic internet money”. It was an example of a true grassroots and community-driven marketing campaign for, which at the time was still an incredibly niche community.

A subreddit moderator for r/Bitcoin made a post asking the community to help create and brainstorm ideas for a promotion. Within the hour, the user /r/mavensbot submitted the iconic image. He later went on to say it supposedly only took five minutes to illustrate it. For those unfamiliar with the Reddit website, this is what the promotion looked like to visitors: 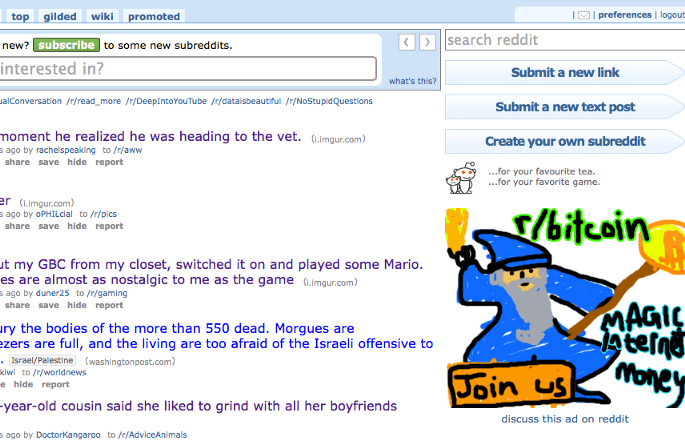 Source from a write-up done by Paul Bars

The slogan describing the currency as “magical” however, was first used on a relatively obscure BitcoinTalk.org post. A poll had been created to pick a slogan for this new internet native currency. With only a few dozen voters participating, the infamous meme was born. “Magic Internet Money” won the poll, with “In Crypto We Trust” and “You Asked for Change, We Gave You Coins” not too far behind it.

Bitcoin users embraced the nerdy and near whimsical characterization given to it by the media and countless individuals in power. Even with the constant doom and gloom predictions of the currency’s future, “magically” the network has continued to operate.

Bitcoin was seen as a fringe phenomenon, even just a joke. With almost a decade of price making higher lows along with its seven network effects growing exponentially, the narrative is starting to shift. We are seeing Bitcoin go from “nerd money” to every corporation, government, bank and institution attempting to leverage it for themselves. There have been multiple attempts to package Bitcoin into something “compliant” or more digestible for the legacy system it ironically itself challenges. The creation of new digital currencies has been one of the more recent  attempts. This only strips away everything about the network that makes it interesting to begin with. Blockchain has become the latest buzzword to fit this purpose. It is the most pervasive means of using one of the technologies that underpin the Bitcoin Network. As an exercise, take any company that comes to mind and do a quick internet search of its name along with the word “blockchain”. There will be at least a few pages of results. Now do the same again, except replace “blockchain” with “bitcoin” and the results will only be a fraction of the prior search.

It may be news to some, but the term “blockchain” in the literal sense just means a “chain of blocks”, a list of records, called “blocks”- quite similar to that of spreadsheets. The pages are cryptographically linked together, one after another. This concept goes back nearly thirty years in cryptography and computer science, but the term and technology have been made popular recently due to the way the Bitcoin Network has emerged. A ledger is not interesting in and of itself. What makes Bitcoin’s ledger unique is that no single entity controls how or which transactions are recorded in the structure. Strip away the permissionless nature of the system, in which anyone can access and innovate upon, and you are left with a database. In other words, just an excel spreadsheet.

A talk by Andreas Antonopoulos discusses this phenomenon of digital gentrification and corporatization of cryptocurrencies along with why we should be fighting to preserve the “weirdness” that Bitcoin brings to the world.

When someone tells you, “I’m interested in blockchain but not Bitcoin”, what they mean is “I don’t understand.” - Andreas

That has not stopped numerous attempts to control it. As of today, several of the world’s largest nations are actively developing digital currencies with the same “underlying blockchain” structure that Bitcoin leverages. They are taking the cypherpunk ideals of Bitcoin and removing the “punk” aspect while keeping the financial privacy for themselves. Last year, 2019, will be remembered as the year governments stopped laughing at bitcoin and entered the “then they fight you” stage with these digital currencies being announced:

Less extreme attempts to conform Bitcoin has been occurring though “financialization”. It is the inevitable process of Wall Street getting control of bitcoin. That is only a joke, of course. Financialization is when the value between multiple parties is facilitated using a financial instrument - this includes derivatives like futures and options.

There is a case to be made that Bitcoin’s financialization and these financial products serve to complicate the market which requires a skill set out of reach for most market participants. Bitcoin is the first time the average person has had a head-start on Wall Street, and many do not want to give that up. Increased complication can also end up concealing  bitcoin creation ‘out of thin-air’ if auditing the onchain metrics is not done. Rehypothecation, or creating more claims to the Bitcoin Network than there are Bitcoin is likely and could already be happening. Debating whether or not this is a negative development is a moot topic, as it will continue. Market participants and Bitcoin users need to be aware of this process and leverage the audibility of the network to maintain confidence. Verify, don’t trust.

Even from within the very community that rejected the status quo and embraced the memes of “Magic Internet Money”, it has experienced attempts of “corporatization” with a past proposal called SegWit2x. This post is not meant to teach about the specific details and intricacies of the changes to the network or call out any actors on either side of the debate. Bitcoin may end up needing all of the supporters and advocates it can get, and re-opening old wounds seldom benefits anyone at this point. That is still to say though, those who do not learn history are doomed to repeat it. It would be a waste of months of debating and spent resources to not take anything away as a learning experience.

For a brief background, an agreement was formed in New York City mid 2017. This was to be known as the New York Agreement (NYA) where several individuals with a corporate focused mutual interest agreed to implement Segwit if a 2 Mb hard fork followed it. You can learn more about the details of Segwit here and more about block size here. This proposal and hard fork of Bitcoin’s network was called SegWit 2x. It meant a doubling of the block size, and what the proponents saw as a compromise between those who still wanted even larger blocks after Segwit itself was implemented. If you would like more of the details and backstory to this implementation, Aaron van Wirdum has a well-documented article on it here.

It is important to note that not a single member of the Bitcoin Core development team, the most used implementation of Bitcoin, was invited to this select meeting. While Bitcoin’s strength is in its permissionless properties, the exclusion of those most trusted by the community in implementing new changes to the network in favor of corporate CEOs, does send a message. The announcement was made via a blog post on Medium by Digital Currency Group. The proposal was backed by 58 of the largest companies in the ecosystem and 83.28% of the Bitcoin Network’s hashing power initially.

In the grand scheme of attacks that Bitcoin will end up facing in its lifetime, this block size increase may appear to be relatively minor. The proposed hard fork of SegWit2x was eventually cancelled after only a few months. Bitcoin users voiced their concerns loudly. Similar to the initial announcement, a joint statement was later made by only six individuals to cancel the hard fork. This highlights how few were actually involved in the decision-making process versus the traditional governance of Bitcoin, or lack of governance I should say. To their credit, they included this in part of that decision:

Our goal has always been a smooth upgrade for Bitcoin. Although we strongly believe in the need for a larger blocksize, there is something we believe is even more important: keeping the community together. Unfortunately, it is clear that we have not built sufficient consensus for a clean blocksize upgrade at this time. Continuing on the current path could divide the community and be a setback to Bitcoin’s growth. This was never the goal of Segwit2x.

To reiterate, those who do not learn from history are doomed to repeat it. The point I’m trying to make in this write-up is to embrace what makes Bitcoin unique. Giving up the permissionless nature of the technology with government-issued stablecoins, the decision making process of protocol changes like with SegWit2x, or even just financialization of Bitcoin as an asset should be looked at with skepticism to say the least. Challenging the status quo has got Bitcoin this far already, why stop now?