#bitcoin proofs of work owner of @UpstreamDataInc raise the BAR

There will be bitcoin.

The future of bitcoin mining is oilfield.

There is no greater quantity of stranded and wasted energy in the world than there is in oilfield.

No, sweetheart, oil and gas is not going away.

It has become increasingly fashionable in recent years to bash oil and gas as being “dirty”, despite there being no actual “cleaner” alternatives that scale or do not rely on fossil fuels and their seemingly endless useful byproducts.

The error they make is to overlook how integral and essential fossil fuels are to every aspect of daily life. Literally nobody in the first world can do basically anything without using fossil fuels, it is built into all of our infrastructure.

You’d think this wouldn’t need an explanation but apparantly for some people it’s easy to forget that roads are paved in oil.

Despite the feel good narratives to the contrary, fossil fuels are the basis of modern human civilization now and for the foreseeable future. It’s time we all accept that and focus on how to make better use of our limited resources.

If you look at the data the only time we ever see a flattening or decline in annual boe production is when there is an economic recession. E.g. early 2000’s, 2008–2009 and likely 2020 numbers will soon show the same. But they are typically small, insignificant blips in the grand scheme: 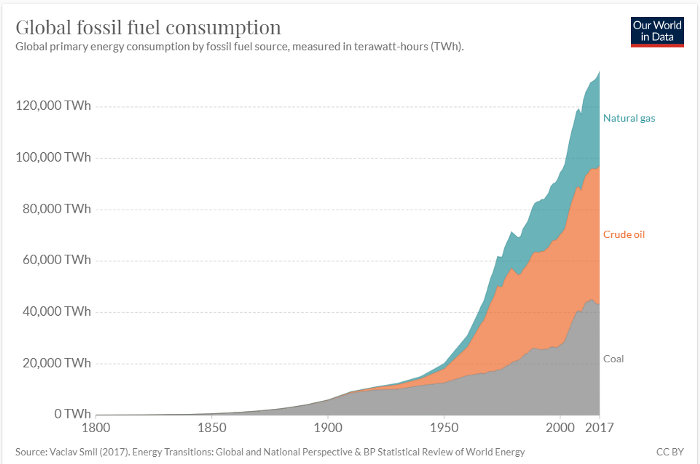 Despite the last few decades of cave-dwelling academics and the brain-dead media conglomerates incorrectly predicting and hyping the decline of the oil and gas industry, it turns out that oil and gas production is correlated to consumer demand and not with feel good, ‘clean-tech’ narratives. Who could have thunk it?

The data shows no signs of oil and gas demand slowing, in fact the very opposite appears to be the case as third-world countries propel themselves to first-world, populations continue to grow and people continue to spend more money on more goods, bigger houses and longer vacations.

Consumerism is alive and well my friends, they are literally banking on it.

To date bitcoin mining has been dominated by cheap grid energy, largely that located in China due to a significant oversupply of hydro-electric capacity. This has simply been very low hanging fruit enabled by massive capital misallocation by the Chinese State — dams built to accommodate demand that has yet to surface.

Generally, Utility companies who control the grid welcome bitcoin miners in the same way that any business welcomes new demand for their product. However, when bitcoin miners start competing with the core customer base for the energy, things may get… hairy.

Miners getting #rekt by Utilities / Politicians.

In most jurisdictions energy projects are largely subsidized by government grants, tax incentives or other forms of financial subsidies (*cough-low-interest-rate-financing-enabled-by-monopoly-money-printing-cough*).

The reason these projects are socialized with taxpayer money is to attempt to bring affordable energy to the taxpaying residential, commercial and industrial customers. These projects often require enormous capital and the end users get many years to decades to pay out the investment.

Indeed, regulations protect the taxpaying end-users by preventing utilities from jacking up prices (utilities are generally monopolists, after all). The point is that Utilities that are subsidized by taxpayers / financiers will therefore give the taxpaying base the priority and preferred pricing for the energy, it is their mandate to do so.

This means we should expect increased discrimination against bitcoin miners by utilities and politicians going forward.

What, do you think that they are going to shut off power to residential areas when the next bitcoin bull run and subsequent mining hysteria causes grid overload? Nope. They’re going to go after miners by jacking up electricity prices at the very least. We’ve already seen it many times and we’re barely out of the gate.

Lets also not forget that mining is possibly the easiest “job” on the planet, simply plug a computer in the wall and you’re “working”. The barrier to entry for grid mining is so low that competition will inevitably continue to drive up energy prices for grid miners. With ASIC’s becoming cheaper and cheaper due to rapid hardware commoditization, it is only getting easier for everybody to join the race for the next block.

And I won’t even touch on how the black market bitcoin miners who steal power, don’t pay taxes, bribe politicians and circumvent other costs that white market miners have to comply with and become disadvantaged by third party rules.

It is simply not going to be an easy road ahead for grid mining.

Why oilfield and not renewable energy?

There is a popular meme about how bitcoin mining is good for renewable energy advancement. The logic is that the large % of wasted or curtailed energy related to wind or solar farms can be instead used the operate bitcoin mines and therefore improve the project life-cycle payout by monetizing the energy that would otherwise be wasted.

A bitcoin mine is effectively a “smart” load bank. “Dumb” load banks are already widely used in practically all power generation industries to help regulate load for a variety of needs and applications, sometime intermittently and sometimes continuously. For example, load banks are often used to keep large reciprocating engines above a minimum load to prevent them from being damaged from carbon build up, etc.

Controlling load is generally useful for all power generation technologies, so there’s probably not enough evidence yet to say if mining does more for renewable sources relative to the alternatives. Considering I know of very few mines that exclusively use wind or solar energy, I have my doubts.

Regardless, my biggest issue with this meme is that bitcoin mining simply does not solve the energy storage problem that plagues wind and solar energy sources.

The entire purpose of large scale renewable projects is to displace fossil fuels like coal and natural gas off the grid. Adding a bitcoin mine to a solar or wind farm does not do anything to meet this goal because both wind and solar energy still cannot respond to grid demand. The reason for this is because they have no associated energy storage mechanism that is practical (generally speaking). They produce electricity only when the wind blows or the sun shines and a bitcoin mine does nothing to make the sun shine any harder when the grid demands it, so the grid still relies on some means of stored energy (i.e. fossil fuels).

We could argue that the solar and wind farms just need to be oversized for the expected energy demands of the grid, but that simply represents massive capital waste and up-front carbon emissions and defeats the purpose entirely.

Then there’s the matter of subsidies, perhaps the elephant in the room on this topic. Renewable projects require massive subsidies to fly and do not actually make economic sense to pursue otherwise (which means they are anything but “green”, but I digress).

But if this is the case then we have to ask — why would the State continue to subsidize renewable energy projects with taxpayer dollars if it ends up simply subsidizing bitcoin miners while failing to significantly displace fossil fuel sources?

And, maybe the greater question, why would the State subsidize bitcoin miners when bitcoin is literally anti-State money that competes with their ability to conduct seigniorage?

Last I checked businesses and organizations don’t usually like subsidizing their competition.

As a demand on energy directly at the source, bitcoin mining helps all energy producers operate more efficiently.

I want humanity to find more efficient energy technologies as much as anybody, but I do not believe that denigrating oil and gas workers for doing the work in which we hire them. Oil and gas projects are paid partially by you and your own consumption habits, mind you.

Until we have actual alternatives to oil and gas that scale we should all be working together and help our current energy producers innovate and operate more efficiently.

Bitcoin is simply another tool on our belts.