Bitcoin: A Global Standard of Value

Wences Casares, in an interview with Laura Shin, said this about bitcoin:¹

If I want to compare the square footage of the first cabin my grandfather had in Patogonia back in 1940, with the square footage of some grandparent of yours Laura, who came to the US and had a cabin or a house somewhere. It’s very easy to compare the square footage. Your father had a house that was 1500 square-foot and my grandpa had one that was 1000 square-foot. [But] when we want to compare how much they paid for it, even if we have access to exact amount they pay, we have to adjust that number to compare them. And we can adjust them to inflation. And in inflation we have to choose the inflation of the currency that we’re using or we can turn it into some other, into gold at the time. There are many different ways we can adjust it and in choosing the way we we’re going to use, is somewhat subjective and therefore the final number is somewhat subjective. Where the result being that the comparison that we are doing of value is a very subjective comparison and it shouldn’t be. It should be as objective as comparing square footage.

And today we can’t do that and I think a world in which Bitcoin succeeds, it’s one in which Bitcoin becomes this non political and objective measure of value. That when you ask for things that matter globally like the price of a currency, the currency is priced in Bitcoin and commodities are priced in Bitcoin and an international trade is done in Bitcoin. It doesn’t mean that any currency in the world disappears. It just means that the meta currency that connects all of those currencies is now a non political currency. With non political value and with non political settlement. Where absolutely anyone can settle in that currency on a Sunday at 2:00 AM with anyone. And that’s new. That has never happened before and it will be very powerful.

The concept of a global standard of value is intriguing, especially considering the role time plays in changing the things we value and the games governments play against one another in manipulating their currencies. In Wences’s example above, we should be able to compare the values of two different houses at two different times just as we can compare their square footages. But this isn’t the system we have today. As Saifedean Ammous said in his book The Bitcoin Standard, allowing currencies (measures of value) to float as they do today is like “attempting to build a house with an elastic measuring tape whose own length varied every time it was used.”

These concepts of values and standards have been rolling around in my head as I’ve been thinking what I’m actually buying when I buy bitcoin. How much value (or scarcity, unforgeable costliness², utility, or collectibility) am I buying per bitcoin? How does that compare to other assets?

The theoretical supply limit of bitcoin is fixed at 21 million. To date, approximately 18.2 million³ bitcoins have been mined. It is estimated that approximately three million bitcoins have been permanently lost⁴, leaving a current supply of 15.2 million bitcoins. A single bitcoin, then, represents approximately 1/15,200,000 = 0.00000657% of the current total supply. That number will get smaller at a fixed schedule until the theoretical supply limit of bitcoin is reached, estimated to occur in the year 2140.

Now that we have a number that represents a specific proportion of this scarce asset, we can ask ourselves, “If I owned an equivalent proportion of gold (ie, an equivalent percentage ownership of the total above ground supply of gold) how much would that be worth?” Let’s do the math.

This observation is useful if we think of bitcoin as digital gold. If we argue that bitcoin possesses similar if not superior properties to the metal, then we can see that, at bitcoin’s current valuation of $9,400 per bitcoin, it is dramatically undervalued relative to gold by some 76 times. If bitcoin is to attain a status and worldwide recognition as digital gold, we can see that its USD price has a lot of room to the upside.

But what about other assets of limited supply? And assets that aren’t as readily comparable to bitcoin? Let’s look at U.S. cropland.

Again, we find that, relative to U.S. cropland— a limited, hard asset — bitcoin is undervalued. This comparison is meaningful if we want to compare bitcoin to the limited land area within the U.S., but we may want to explore other types of land, because not all land is of equal location, utility, or disposition. We’ll do this in a few paragraphs.

But now notice that we have assigned two different assets, gold and cropland, values in similar terms, that of net scarcity through bitcoin. This allows us to easily compare the two assets with a simple ratio of one to the other. The result ($715,058/$68,960=10.3) is the realization that we (as the total market of buyers, the generators of demand) place a higher premium on the inherent value of gold than we do on the inherent value of cropland. Gold has a monetary premium approximately 10 times higher than that of cropland. Gold’s value density is greater than that of cropland’s.

Before using bitcoin as a standard of value in this way (a standard of scarcity), it was impossible to directly compare gold to land. Gold is priced at $1,592 per ounce and cropland at $4,130 per acre. But we cannot directly compare ounces of metal to acres of land. To say that an acre of arable land is worth 2.6 ounces of gold is a useful metric if we place all other items in terms of gold. But the inherent value of gold fluctuates over time which is caused by market cycles, changing preferences, and ad hoc changes in the gold stock (the true scarcity of gold is ultimately unknowable). An ounce of gold today may or may not carry the same inherent value as an ounce of gold 100 years ago or 100 years from now. Instead, I propose that a better intermediary is to use a common unit of scarcity.

“Scarcity is money’s most important property. If supply of the unit of measure were constantly and unpredictably changing, it would be very difficult to measure the value of goods relative to it, which is why scarcity, on its own, is an incredibly valuable property. While the value of the underlying measurement unit may fluctuate relative to goods and services, stability in the supply of money results in the least amount of noise in the relative price signal of other goods.” — Parker Lewis⁹

We could pick any number we’d like for this unit of scarcity: one percent, or 10 percent, or 12.64298 percent. The actual number doesn’t matter, we just have to use it consistently and define it as the standard. So what number do we choose?

The scarcity of bitcoin is a universally recognized and secure fixture of scarcity. Because of its framework and infrastructure, Bitcoin can be the yardstick of value. Think of this in a similar way of how the meter was originally defined in terms of the circumference of the Earth. When the meter was established, it was pegged to something tangible (at least conceptually tangible). The Earth is a tangible and conceptual basis of physical dimension; Bitcoin can serve the same purpose for value.

When disparate assets are assessed relative to bitcoin, they can then be compared directly to each other, their units cancelling out leaving only a magnitude. This magnitude is an expression of relative value. Using our new bitcoin yardstick, the table below compares various assets.⁸ 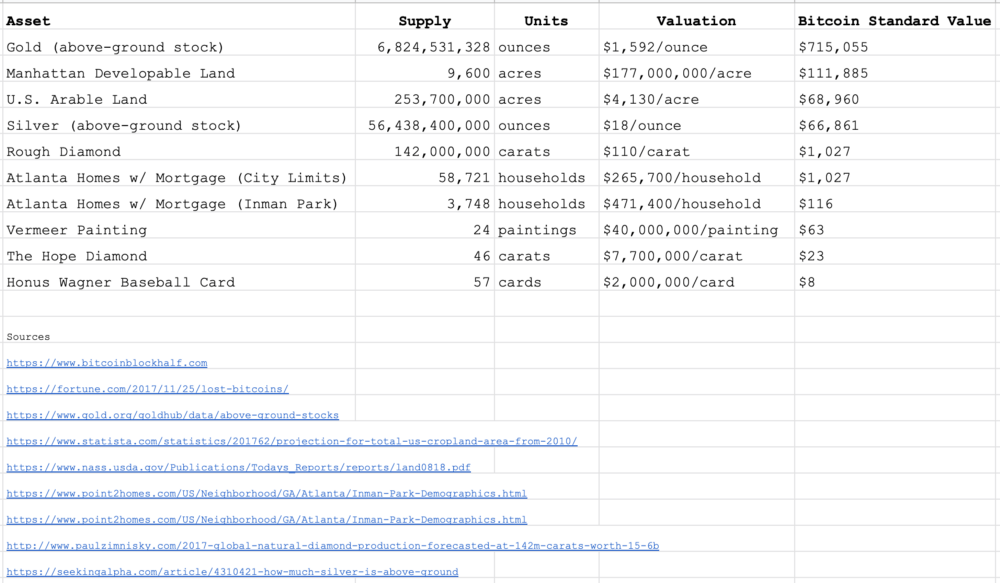 Many interesting observations can be made from the above table:

Analyses like these can help an investor weigh the current value of bitcoin and make educated best guesses about where it might be headed, but it can also allow us to compare the relative values of everything in our lives. This paper proposes that Bitcoin represents a secure and stable standard by which we can weigh these values. But like the actual supply of gold, the actual supply of available bitcoins is unknowable because the exact number of lost bitcoins is ultimately unknowable. Therefore, to make Bitcoin a true standard, we can use the knowable, theoretical supply limit to arrive at the following: 1 bitcoin / 21,000,000 bitcoins = 0.00000476%. This is the new, universal constant of value, and can be applied to all assets of limited supply.

But Value Is Subjective

But wait, you protest. Isn’t value subjective? And doesn’t it change over time? Yes, value is subjective on a micro level and it does indeed change over time. The subjectivity of value is constrained on the micro level. We like to think that we are unique creatures operating independently as free-thinking individuals. The reality is we’re more like ants: our collective preferences and decisions agglomerate together to form quite a singular thing we call the Market. The Market is where a few dozen (or million or billion) buyers and sellers meet at the margin and decide what something is worth. Sure you might buy the blue sweater and I might buy the red one (a reflection of our respective individualities), but the Market has determined that blue is in and red is out and so, a week later, my red sweater shows up on the clearance rack for 50% off while your blue sweater is displayed in the store window priced at a substantial premium. That’s value; and it changes over time.

Let’s take a Vincent van Gogh. Back in his day, few people valued his artwork and were only willing to pay a few hundred Francs for it. But what does that actually mean? How do we, modern purveyors of US dollars, make sense of that? How do Francs compare to US dollars? How do their respective inflation rates compare? Perhaps we could figure it out by comparing those few hundreds francs to the cost of living at the time to our cost of living today, but what was their standard of living? And how does that compare to ours? There are so many questions as to how the painting was valued that it makes it impossible to paint an accurate picture.

Now let’s assume that M. van Gogh had instead priced his paintings in bitcoin and that a buyer had paid 0.001 bitcoin for a single painting. And let’s further assume that, today, the same painting just sold for 2,000 bitcoin. With everything pegged to bitcoin then and now, all the earlier questions we had of local currency and standard of living is already discounted in the price paid in bitcoin. Bitcoin, through its fixed supply, is the full representation of relative value at any given time. While the painting became more valuable relative to everything else over time, value is a zero-sum game: value was pulled away from something else and directed toward the van Gogh painting because the painting became more valuable at a much larger rate than all the other goods and services one can purchase at any given moment. Our bitcoin yardstick can act as a measure for value, allowing us to see with precision how we (the market) assign value, assess how that changes over time, and help lead us away from something nominal toward something more absolute.

This is a working paper. I welcome any and all comments and contributions. Thank you.