The Many Angles of Bitcoin Adoption

It might make sense just to get some in case it catches on. If enough people think the same way, that becomes a self fulfilling prophecy. – Satoshi Nakamoto, 2009

The data indicates that Bitcoin is catching on from a number of angles. As Satoshi pointed out in 2009, this creates a positive feedback loop.

The acceptance and value of Bitcoin is largely based on imitation which can be explored through Rene Girard’s mimetic theory. We usually explain why we want something because it fits our unique preferences, or we highlight the objective good qualities something has. But in reality, we are frequently imitating others. We pattern our choices based on another’s example. This is also the nature of the monetization process. 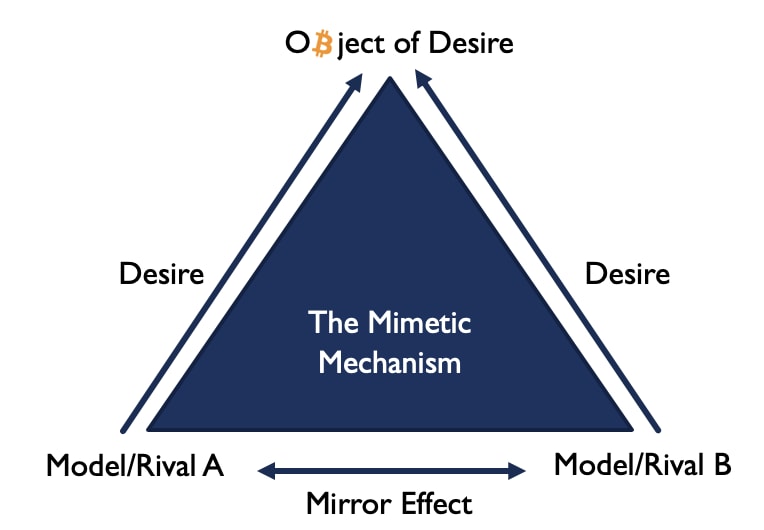 This idea of imitation is key to Bitcoin’s value.  Absent agreed upon frameworks to value Bitcoin, the price someone else is willing to pay is often the best signal one has to know what to pay. It’s self-referential and what makes Bitcoin’s price exceptionally reflexive. Following the picture above, when price rises, Rival A buys Bitcoin. Rival B is imitating Rival A, so Rival B also buys Bitcoin which then leads to Rival A buying more Bitcoin. This also works in reverse. As price falls, Rival A sells which triggers Rival B to sell and so on. This crowd mentality exists everywhere and has been especially true for Bitcoin. Crowds need a reason to exist.

For the Bitcoin crowd, there are many reasons.

To start with the most controversial and least talked about adoption vector, Bitcoin presents a prisoner’s dilemma for nation states and their sovereign wealth funds. Of course, nation states would like to maintain control of monetary policy. But they have to participate in the Bitcoin game whether they want to or not. 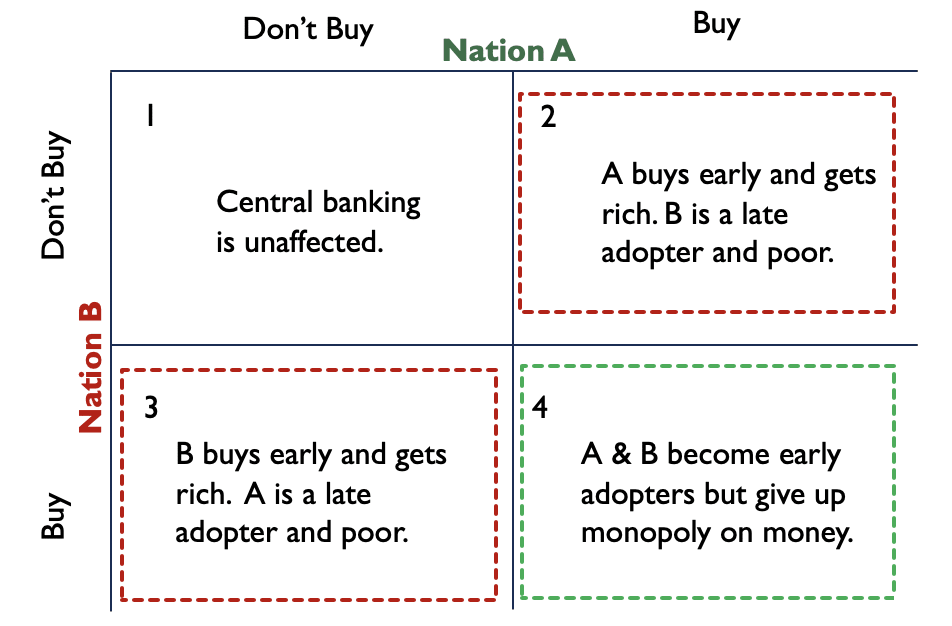 This is a forcing function. It only takes one sovereign wealth fund to set this in motion. Once a fund has accumulated its target amount, it simply has to make it known. Not only would this immediately put the fund in profit by initiating a cascade of buying from others, it would force other nations to consider making the same purchase. Nation states will experience intense fear of missing out.

Bitcoin is money, a digital gold. As such, the target market is massive. If Bitcoin can achieve the market capitalization of gold, it would see over 50x return on investment. Bitcoin’s scarcity, acceptance, and portability make it an object of desire to gold bugs and central banking skeptics.

Bitcoin is compared to gold because it’s scarce. For thousands of years, gold has been used as a money and store of value because consistently, its annual issuance has hovered around 2-3%. It has maintained its purchasing power. Meanwhile, failed currencies range from Rai stones, to seashells, to copper, to countless attempts at paper money. If a money supply can be increased, it will be increased. Bitcoin has a capped supply of 21 million. The Bitcoin issuance decreases approximately every four years. Symbolically, 2020 is important because for the first time, we will see the annual issuance be less than that of gold.

Data indicates that Bitcoin that more people than ever are using Bitcoin. This chart illustrates the number of addresses that hold a non-trivial amount of Bitcoin (.1 BTC). This measure allows us to filter out addresses with so-called dust balances. More people than ever are holding Bitcoin, and infrastructure is in place to make it easier for merchants to accept it as payment. 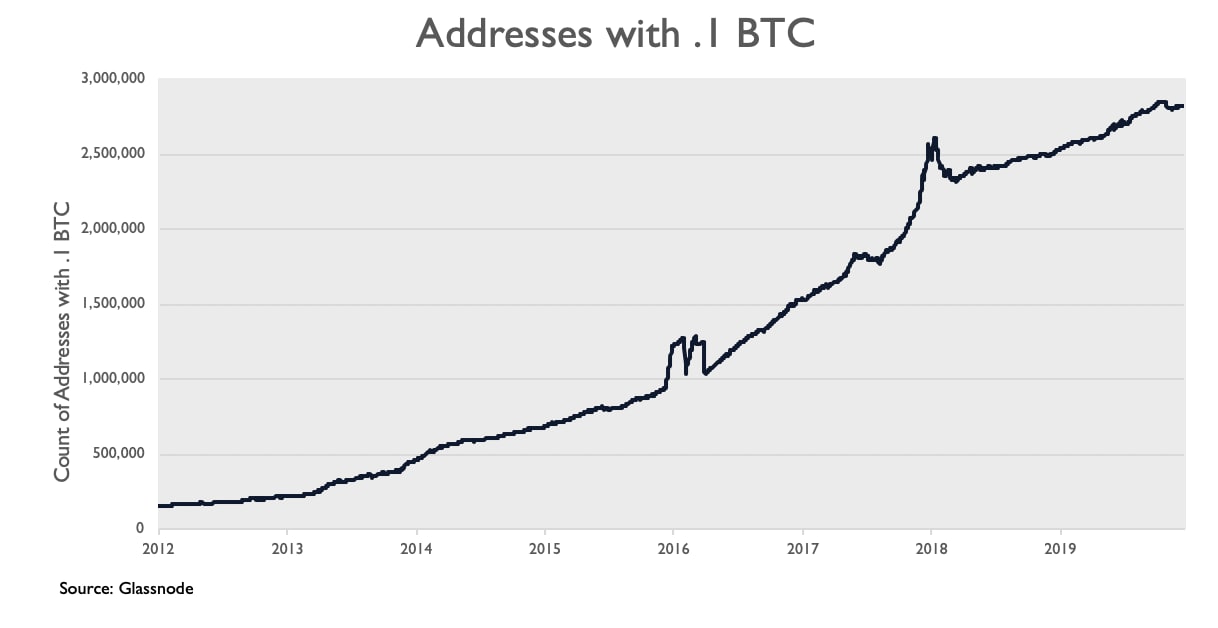 This chart shows Bitcoin holding patterns. Over 40% of Bitcoin has been held for two years or more, and that number is increasing rapidly. We can observe a similar patterns of accumulation before previous bull runs. 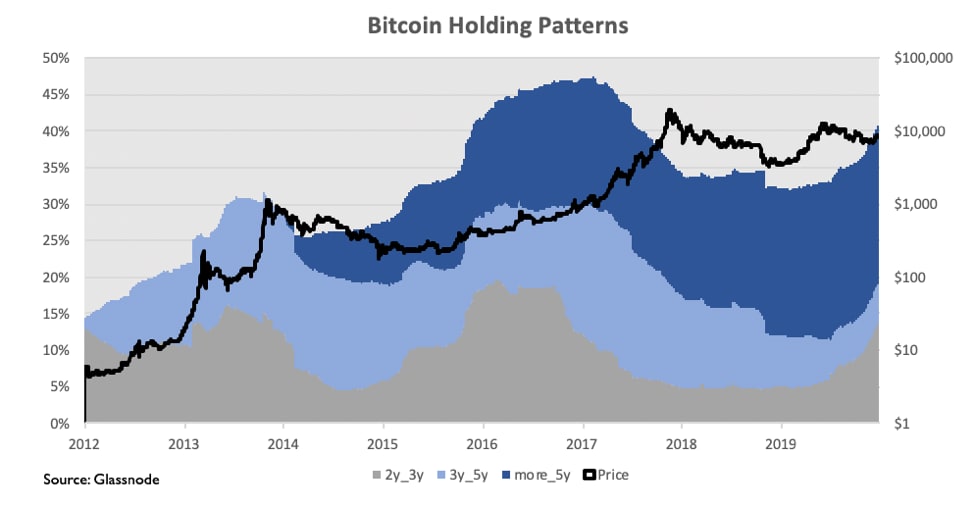 One of the biggest pitfalls for gold is its portability. It’s inconvenient for daily use but also expensive to move large quantities. In November of 2019, Poland repatriated 100 tons of gold, about $5 billion. Poland conducted a top-secret mission with a police escort, a helicopter, and a freighter plane for only $5 billion of gold. In a world that’s increasingly digital, we need a money that is digital and portable. Not only would the same transaction cost less than $1 and be completed in an hour, but the Bitcoin network handles over $5 billion each day! Over $7.5 trillion has been transferred throughout Bitcoin’s history. Bitcoin is portable in a time of rapid globalization.

Bitcoin is an Uncorrelated Alternative Investment

There’s $250 trillion in global debt and that trend seems unlikely to reverse. The United States federal government alone has added $10.4 trillion of debt since 2009. Central banks are forced to implement accommodative monetary and fiscal policy in hopes of tempering the debt bubble - $17 trillion in negative yielding bonds and counting. Investors are using Bitcoin as a hedge against currency devaluation while also decreasing the overall correlation within their portfolios. 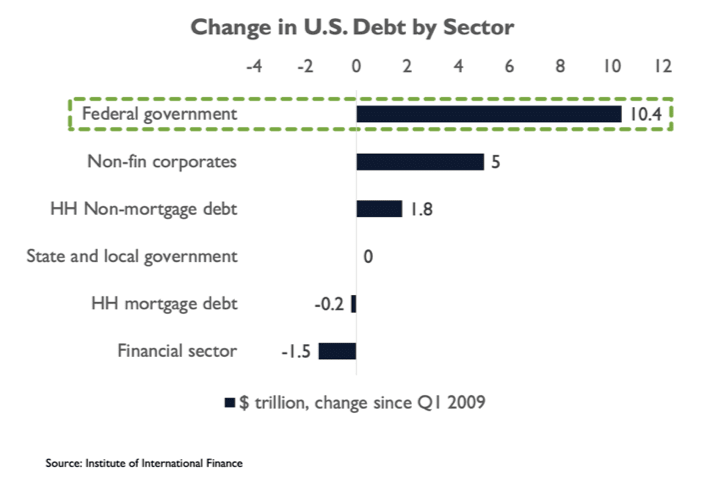 Uncorrelated return streams are hard to come by. Bitcoin has been completely uncorrelated in the last five years. Investors have noted this as an intriguing characteristic of Bitcoin. Not only does it offer potential for great returns, but it is uncorrelated to major assets.

As more investors warm to the idea of Bitcoin as an uncorrelated hedge, career risk will decrease, institutional products will come to market, and firms will have the go-ahead to allocate. It’s reflexive.

Bitcoin is a Millennial Movement

Millennials just became the largest US generation as of 2019 and are soon to be the largest generation in the world.  They prefer alternative financial products - mobile banking, robo advisors, prepaid debit cards, emergency lending. They have grown up in a digital world and are comfortable holding money on their phones.

And in the next 10 years the younger generations are estimated to inherit almost $10 trillion. This does not even include the money millennials will earn as they enter their prime working years. This is the tip of the iceberg.  Over the next 30 years, estimates indicate almost  $70 trillion of wealth transfer. 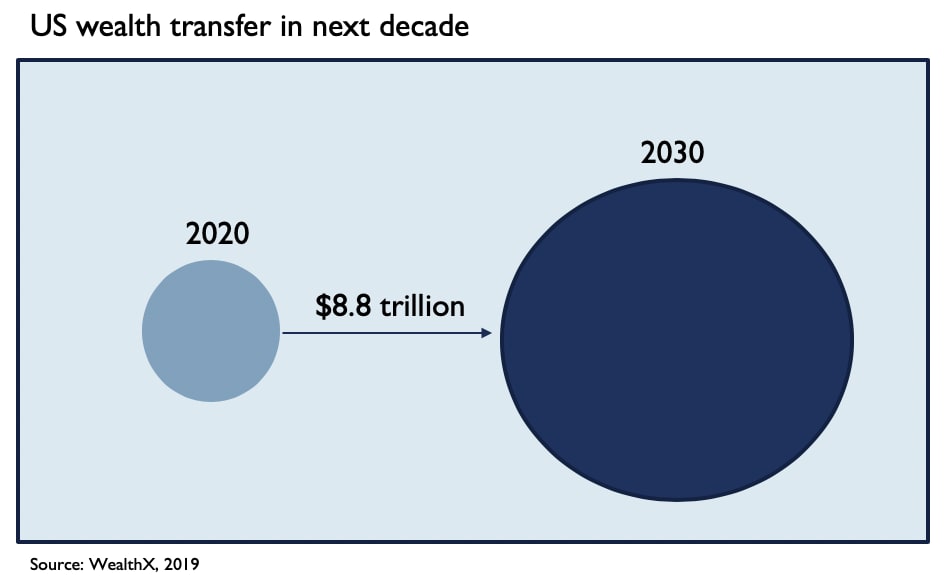 The data below shows the top 5 equity holdings as a percent of total assets across generations in Charles Schwab IRAs. Amazingly, millennials hold almost 2% of their assets in Grayscale Bitcoin Trust, a Bitcoin vehicle that often demands over 20% premium to spot. Not only are millennials interested in exposure to Bitcoin, but they are willing to pay a substantial premium. 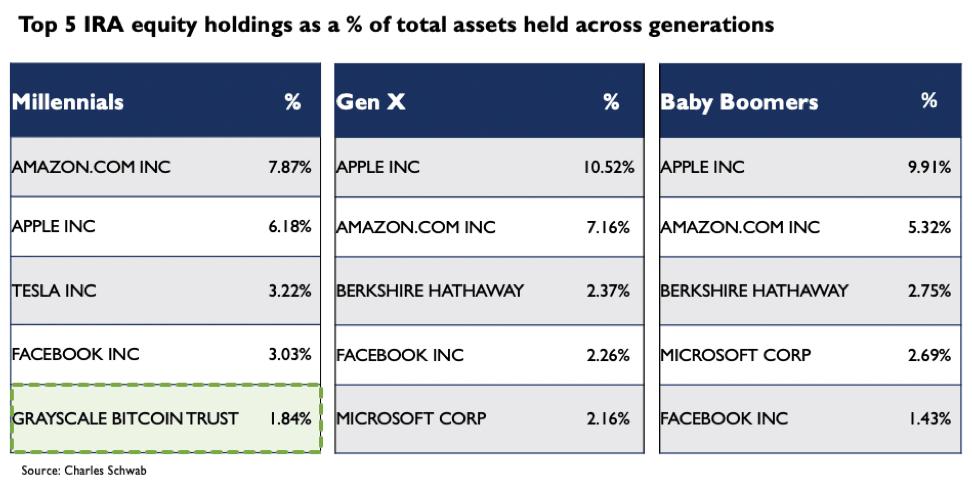 As millennials enter their prime earning years and inherit enormous wealth, this Bitcoin buying should increase dramatically. Square “Bitcoin is resilient. Bitcoin is principled. Bitcoin is native to internet ideals. And it’s a great brand” – Jack Dorsey To further illustrate the connection between Bitcoin and millennials, it’s worth exploring Square, one of the companies at the center of the trend. Jack Dorsey, CEO of Square and Twitter, is an avid supporter of Bitcoin. And with $3.2 billion in revenue in 2018 (~50% increase YoY), Square’s business is growing quickly, especially with younger generations. 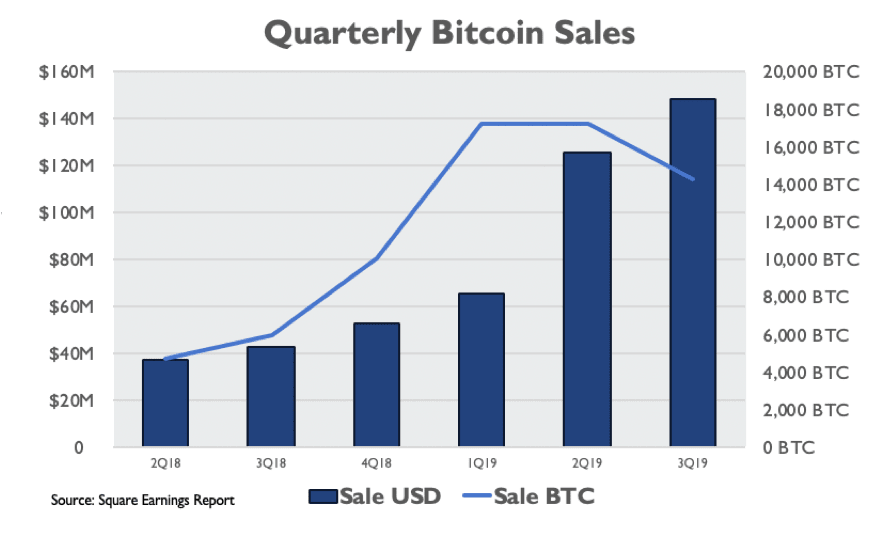 Square is on the path to providing end-to-end financial services for consumer and merchant that represent a massive portion of the population.  Expect Bitcoin to be integrated into all of these services in the coming years.

Bitcoin is a Tool for Survival, Social Good, and Dissidence

“Africa will define the future (especially the bitcoin one!). Not sure where yet, but I’ll be living here for 3-6 months mid-2020.” – Jack Dorsey

Jack Dorsey also recently made a trip to Africa where he sees substantial opportunity. Africa is home to 7/10 fastest growing economies on earth and 1.2 billion people.

Nigeria also has the highest Bitcoin search volume since 2018. Comfort level with digital products, acceptance of alternative money/financial products, and their intrigue for Bitcoin shows interesting parallels to millennials broadly.

Currently, Africa’s GDP is only 10% that of the United States. Generally, Africa isn’t burdened by past technological success and is now in the throes of a technological revolution, leapfrogging personal computers in favor of internet connections through mobile phones. It’s plausible that we see Africa lead tech adoption over the next two decades.

Because currencies and banking infrastructure have been so unreliable, pre-paid minutes and services like M-Pesa have been used for the last decade to transfer value. Consumers are comfortable with alternative payment systems, simply using whatever works best. And increasingly, Bitcoin is the tool of choice.

This chart shows monthly volume for Paxful vs Coinbase. Coinbase is the most popular US retail trading venue. Paxful is a peer-to-peer online exchange where Bitcoin is traded for direct bank transfers, gift cards, other goods or services, or cash. Paxful doesn’t require connection to traditional banking or regulatory infrastructure so it can service unbanked citizens in developing countries or authoritarian regimes. This chart is particularly interesting because it shows that organic demand for Bitcoin as a money is steadily growing while the trading volume on Coinbase seemingly follows price movements. 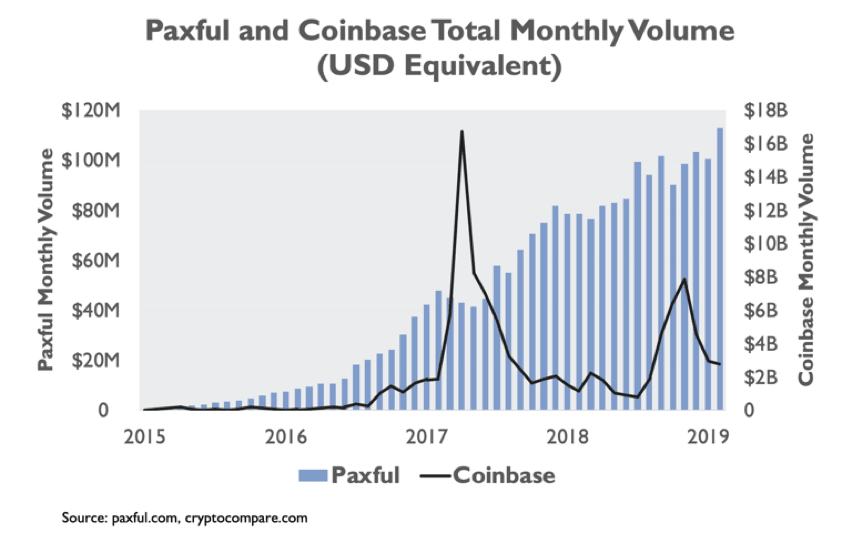 Necessity is the mother of innovation. It’s worth paying attention to how those that need this technology are using it.

Critics opine on the wastefulness of Bitcoin mining. But contrary to popular belief, Bitcoin mining is emerging as a key driver of profitability for renewable energy.

From the perspective of those selling electrical power, Bitcoin miners have become the buyers of last resort. Energy economics in many countries have carved out a serendipitous niche for Bitcoin miners. Governments are forcing a transition from fossil fuels by subsidizing renewable energy. These subsidies have resulted in over-production of renewable energy. This over-production has outpaced transmission capacity. Because energy storage at scale is still inefficient and uneconomical, this forces power plants to sell electricity at substantially reduced prices. This has become a boon for Bitcoin miners and power companies. Miners buy power at a discount by locating themselves near the plants, and the power companies have buyers of excess power that would otherwise go to waste. Unsurprisingly, companies are taking advantage of the opportunity.

In the fall of 2019, two companies announced funding to launch mining operations in the U.S., specifically to capitalize on these dynamics. Layer1 raised $50 million led by PayPal founder, Peter Thiel. The goal is to launch a vertically integrated operation that utilizes wind energy in Texas. Crusoe Energy raised $70 million, $40 million in financing and $30 million in equity. This raise was led by Bain Capital Ventures. Crusoe provides solutions to oil and gas companies to reduce flaring and repurpose the energy for mining and cloud computing.

Environmentalists – from foes to friends!

Bitcoin is the Best Performing Asset of the Decade

Finally, Bitcoin is the best performing asset of the decade. From fractions of a penny to over $9000 today, millions of percent of appreciation all without a central team managing its success.

This price performance is inescapable. If you are paying attention to markets, you know the Bitcoin story. The price increase and the resulting wealth that some have gained, attracts others. Once again, the is reflexive.

Once more from Satoshi…

It might make sense just to get some in case it catches on. If enough people think the same way, that becomes a self fulfilling prophecy. – Satoshi Nakamoto, 2009