It’s time to stop complaining with your voice about your current plight. 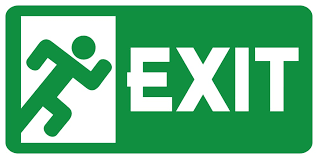 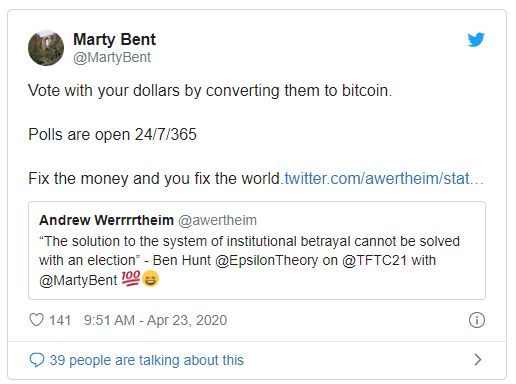 My mother has been a bit taken aback by the tone of this rag so far this week, so I figured I’d take today to dial it back a bit and focus on the positive side of things and focus on how Bitcoin can help individuals combat the encroachment on civil liberties and individual critical thinking.

As Ben Hunt pointed out on TFTC earlier this week, the solution to the system of institutional betrayal cannot be solved with an election. Voicing our opinions via a vote in a presidential election does not make sense any more. The options we are force fed are simply illusions of choice put forth by the establishment oligarchic empire. Meet the new boss, same as the old boss. Getting one’s hopes up for hope and change or making the land great again are pipe dreams. The system cannot be fixed from within. It is simply too far gone.

The only way out is just that, to see ourselves out. To exit this system of corruption and rot. Individuals the world over need to come to the logical conclusion that there is no other way. They must build and transition to new systems that are completely separate from the captured system they are subjected to.

Bitcoin is an example of one of these systems that allows us to take action and exit the system. It is a system that cannot be controlled by the institutions that have brought our world to the brink while plundering the masses for the benefit of a very small group of people. They cannot tinker with the levers that make Bitcoin work as they can tinker with interest rates and the monetary base. NO ONE can tinker with the levers of bitcoin. It would take everyone within the network to tinker with its levers. Creating and inherently fairer, more just system. The best part is, individuals are able to vote 24/7/365. The exit ramps to this new system have been constructed and more are popping up every day. Each exchange that is erected and each merchant that begins accepting sats for payment of goods and services increases the ability of the masses to exit a corrupt system.

Even better, the new system that Bitcoin represents is getting better every day. It is becoming easier to use this new system. The number of things one is able to do with a UTXO is increasing. The number of people helping to build it out across all layers is continually increasing. All the KPIs are improving drastically as the prospect of Bitcoin’s success is becoming more obvious by the day. This new system has a lot of potential.

It’s time to stop complaining with your voice about your current plight. It has become glaringly obvious that this has absolutely no effect on the outcomes of the machine we are currently beholden to. It does what it wants no matter how loud you yell. Walk away. Come help build the peer-to-peer system of the future. You can do this by deciding to store some of your wealth in bitcoin.

Fix the money and you fix the world.