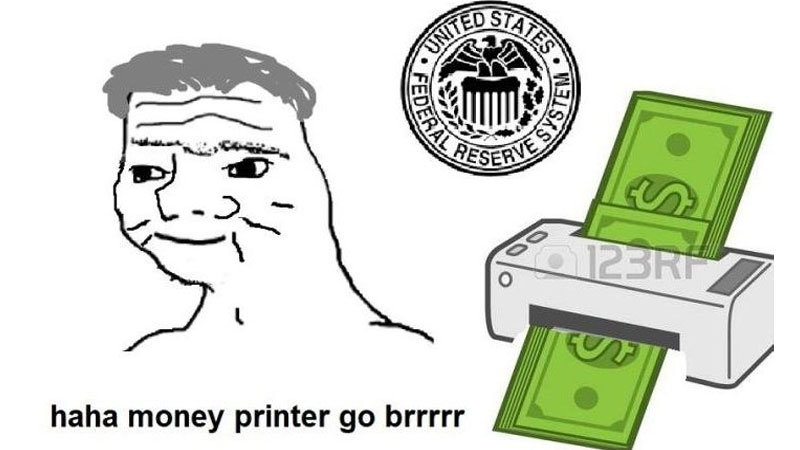 Money printing is an age-old problem. History is littered with societies that attempted to print their way into prosperity. Despite lessons from the past, this confusing ritual still continues to this day, courtesy of central banks like our Federal Reserve.

As a solution to the damage dealt by money printing, Bitcoin was born. In the depths of the financial crisis, Satoshi Nakamoto created Bitcoin as an alternative to the broken monetary system. Bitcoin was designed with a hard cap of 21 million coins which will be mined over the coming decades.

We are witnessing a second serious financial crisis now sparked by the coronavirus. Stocks are in free fall, currencies are swinging wildly, and credit markets are frozen. In an attempt to calm the financial system, the Federal Reserve has been printing money like never before.

What began with a few billion dollars has now morphed into trillions of dollars per month in “liquidity injections,” quantitative easing, and credit facilities. On top of this, Washington is pumping in trillions of fiscal stimulus.

Meanwhile, Bitcoin’s monetary policy remains untouched and as strong as ever.

For someone without a finance background, the actions by authorities may appear confusing and arcane. Where exactly does this government money come from? This article aims to clear that up. I’ll begin with a breakdown of how money printing works in the legacy financial system and then compare that to Bitcoin’s solution.

A Peek Behind The Federal Reserve’s Curtain

The Federal Reserve System (“Fed”) is our Central Bank. It is operated by a series of twelve Regional Reserve Banks with economists and financiers who follow the decisions of its leadership, the Board of Governors.

It is often said that the Fed can “print money” — however, this is not spinning up the printing presses and putting that money into the hands of whoever wants it. The process is a bit more involved.

First, remember most dollars are not physical. Physical banknotes are only a small amount of money in circulation and are created by the U.S. Treasury at the discretion of Regional Reserve Banks. Most of the time, money is created in the Federal Reserve System with a stroke of a keyboard.

So how exactly does the Federal Reserve print these digital dollars? The secret lies in its balance sheet. To explain, let’s quickly review some accounting basics.

A balance sheet is a record of the assets and liabilities of an entity. For example, a business may have assets such as: cash, inventory, and property. It’s liabilities would be: rents, loans, wages, etc. The balance sheet is a snapshot that records these totals and ensures a company is properly managing its budget.

Banks also have balance sheets. On the assets side of their balance sheet, banks have generally have: cash (known as reserves), loans (the expectation of future payments), and financial instruments such as bonds. On the liability side, banks have: deposits (money to be paid upon request) and equity. This is how banks make new loans. When a borrower needs a loan, the bank will place virtual dollars in their account and record that transaction as both an asset (the expected repayment of the loan) and a liability (deposits).

So, if new credit is both an asset and liability, what stops banks from making unlimited loans? Capital Requirement Ratios. These are rules and regulations that prevent banks from expanding their balance sheet and taking on excess risk and lending.¹

For example, lets say the value of mortgages fell by 40% and banks need a boost. The Federal Reserve can bail them out by buying those mortgages at whatever they deem to be the “correct” price and placing them on their balance sheet. It’s that simple. And this is exactly what happened in 2008 when the Federal Reserve purchased over $600 billion of government-insured Mortgage-Backed Securities to artificially increase the value of mortgages (and thereby reduce the cost of borrowing).

That program was just the beginning. Over the past decade, the Federal Reserve has purchased trillions of dollars of government securities and placed them on its balance sheet. This has, in effect, manipulated markets and monetized the U.S. national debt. Below is a chart of the Federal reserves total assets on its balance sheet. After an initial jump in 2009, it has continued to make new highs for a decade. 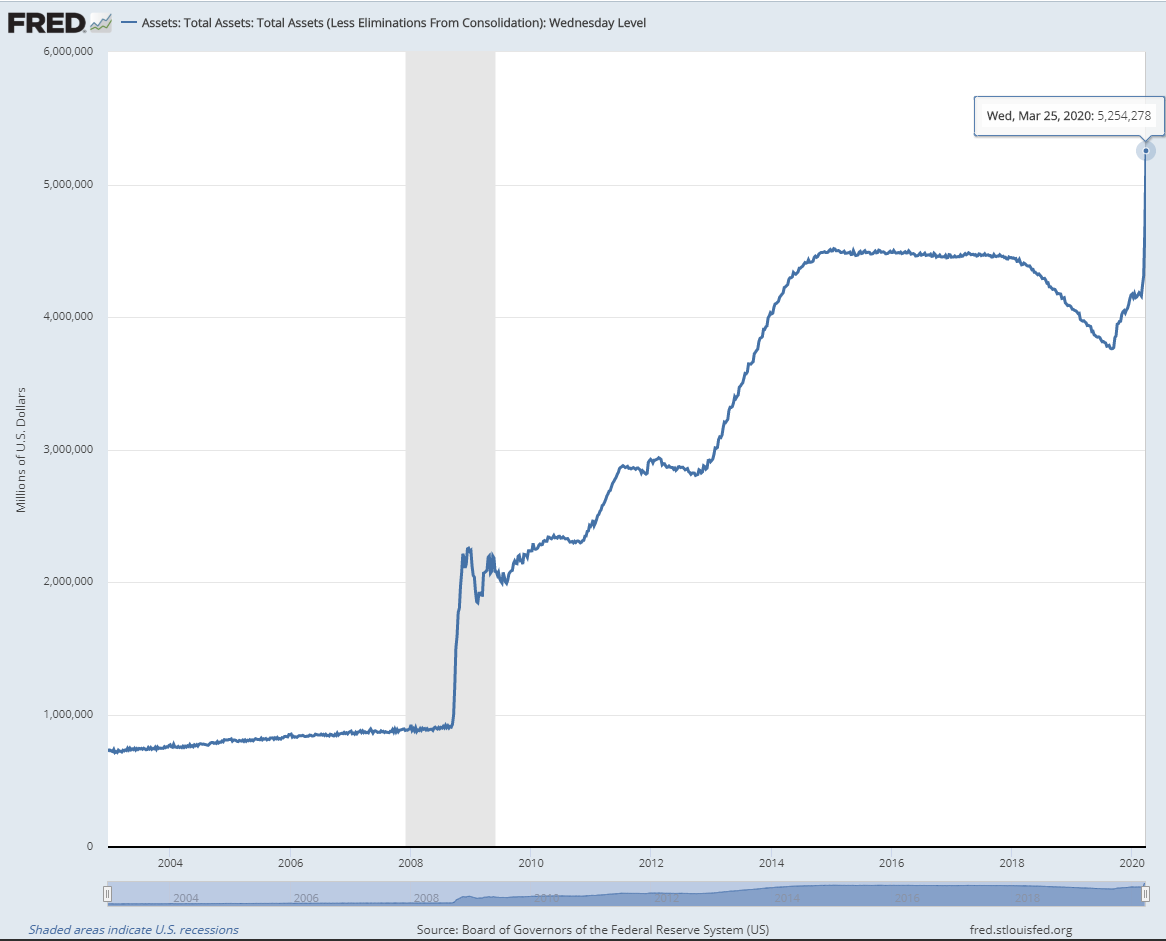 The latest spike is due to the variety of programs the federal reserve has instituted to prop up markets. Just last week, the Federal Reserve stated it will purchase $625 billion per week in government securities and established multiple special (questionably) legal vehicles to purchase commercial paper, asset-backed securities, and corporate bonds. All of this will go onto the Federal Reserve’s infinite balance sheet to 1) bail out institutional investors that took on too much risk, and 2) pay for trillions of dollars of stimulus from the federal government.

While these actions may provide short-term stability, like any stimulant, they bring a nasty set of side effects:

In the eyes of many concerned citizens with longer time-horizons than the upcoming election cycle, this is the wrong path. Sacrificing our future to pay for the present will only usher in an era of poverty and disrepair. Thankfully, Bitcoin provides another way.

Bitcoin is a virtual currency created in 2008. What makes Bitcoin unique is that it is the first scarce digital asset without a centralized owner. The bitcoins are created, sent, and received over a peer-to-peer protocol without any intermediaries. Bitcoin uses a form of database called a blockchain which creates a linear history of changes to the ledger that cannot be undone.  (For a technical introduction, see this video) 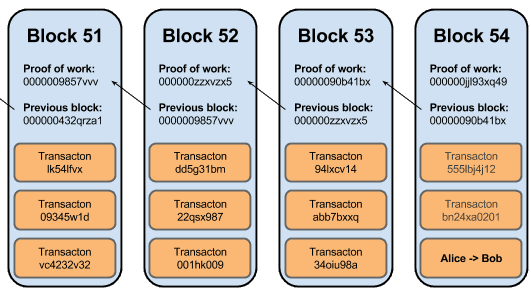 An image of the structure of Bitcoin’s blockchain.

This linear history is created by a series of blocks of transaction data. These blocks are “mined” and propagated about every 10 minutes. Mining is a process where computers around the world compete to solve a math problem which generates the next block. Miners spending their computing power are compensated in newly minted bitcoins which are called “block rewards.”

The number of bitcoins for each block reward is based on a simple function. Every 210,000 blocks (approx. 4 years), the block reward is cut in half. For the first 210,000 blocks, the rewards were 50 bitcoin per block. At block 210,001 rewards were cut in half by the protocol to 25 bitcoins per block — which also cut the inflation rate in half. This event is known as a halving.

Soon, Bitcoin will enter into its 4th halving era where miners will receive 6.25 bitcoins per block. This process will continue until around year 2140, as shown below. 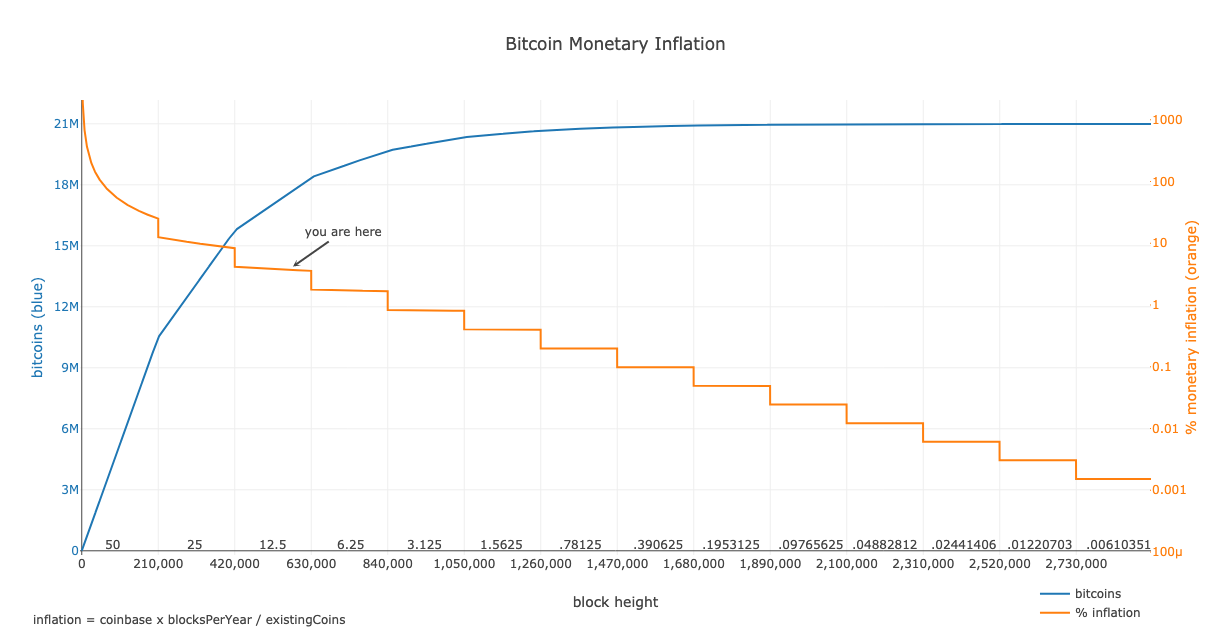 As you can see Bitcoin’s monetary policy is strictly set to 21 million coins. No more, no less. Because Bitcoin is decentralized, no entity can print money, bail out their politically-connected friends, or dilute the value of your time.

With a predictable supply, Bitcoin’s monetary policy is ideal for market participants. Under a Bitcoin standard, money no longer decays over time. Ordinary people would not have to invest in risky financial instruments to preserve their wealth. This brings profound benefits and motivates individuals to plan their future and protect their savings.

Money can also be thought of as a measuring stick of value. By having a steady measurement, Bitcoin allows prices to freely fluctuate to the supply and demand of the market. Powerful countries could no longer manipulate trade and currency to the detriment of the developing world. No country would have the luxury of global reserve currency status. This shift would cut out legions of financial middlemen and the world could speak one global language of value.

We are witnessing the late stages of a confidence game. Those in power can grease the palms of their friends at the expense of everyone else. It has brought decades of economic stagnation and inequality. While the future is far from certain, we now have an escape hatch. With Bitcoin, there is no lever. There is no committee. There are no printers. There is a level playing field of 21 million, cold, hard coins — and that’s the way it should be. A big thank you to my charming editor Karina.