Author of Bitcoin: Sovereignty through mathematics 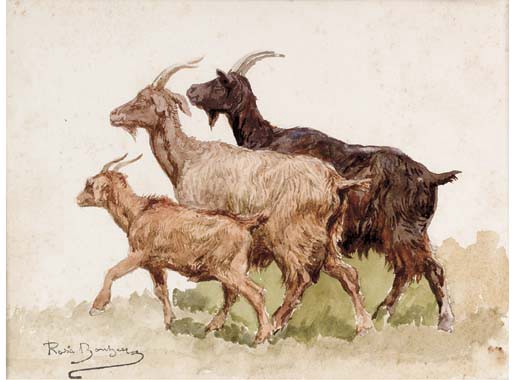 Let’s rewind to the dawn of civilized society. Money hasn’t really been invented yet and good old barter is the only means of trading there is. I will give you my three goats if you give me your cow. If the receiver of this proposal values three goats more than one cow, an exchange occurs. This is at the very core of all human interaction that isn’t violent. Both parties believe that they stand to gain something from the interaction. If this wasn’t the case, no interaction would have taken place. But how can I know that one or more of my three goats won’t be used as barter in another exchange of which I’m not a participant? I can’t and neither can anyone else, except the new owner of these bearded omnivores. They are by definition a Medium of Exchange. So is everything else. Every physical thing that anyone has ever claimed ownership of can be used as a Medium of Exchange. The good’s usefulness as such however, is another matter.

A goat is hardly considered to be a very effective form of value bearing asset by anyone. Let’s examine why. In order for a good to be a useful Medium of Exchange it needs to be portable, divisible, fungible and not easily confiscatable but it also needs to be able to store value, at least short term. Storing value is the trickiest part since what anyone finds valuable is entirely subjective. This is easy to forget. In what order the other monetary properties are important depends on how, where, why and when the supposed exchange takes place. A car, for instance, can be considered relatively portable if it works and the potential buyer is within an acceptable range but it’s not very divisible and quite easy to confiscate. In-game gold or Monopoly money on the other hand is very divisible and portable but not very fungible since it’s almost exclusively attractive to those playing a very specific game at a very specific point in time. These examples might seem arbitrary and insignificant to any real world economy, but the truth is that the only thing separating money from other goods as media of exchange is its usefulness as such.

In order for anyone to accept something as payment for another thing they need to be confident that this something will not lose its value anytime soon. This is the one key property that any method of payment must hold. An apple can be bought for a certain amount of money but no one would accept apples as payment for a new car since the apples would rot and lose their value well before he could exchange them for something else. What everyone seems to have forgotten is that the same is true for fiat money. Your Dollars or Euros won’t rot overnight but they will rot over a couple of decades. No one stacks money in their mattress anymore because of this. Inflation deprives us of the ability to store value long term. Because of this, every decision made by every politician, every merchant and every entrepreneur is corroded by short term thinking. Human progress is equipped with a damper and we’re not as progressive, effective or innovative as we could be. All because of our inability to resist the urge to dilute our money supply. The temptation to counterfeit has existed as long as money has and no civilization has ever been able to stop it. On the contrary, we’ve been very inventive when it comes to inventing excuses for this behavior.

Enter Bitcoin. A monetary entity that no human can alter or even influence at this point. A very divisible token directly linked to the most fundamental thing of value the universe has to offer — energy. A means of converting energy into a part of the worlds only digital pie, of which no more than 21 million (times a hundred million) slices can ever be cut. A portable, divisible, fungible and not easily confiscatable form of money that exists and proves its superiority to the existing system every day. So why isn’t Bitcoin particularly popular as a Medium of Exchange? Will it ever be and, more importantly, does it really matter? To answer this, we must dive a little deeper into the subject. Bitcoin is a very good Store of Value from a personal perspective. You acquire an amount and that amount stays the same no matter how long you keep it. More importantly, that amount will represent the same part of the whole sum of bitcoins that can ever exist no matter how long you keep it. If you want your specific amount of bitcoins to buy you a “lambo”, all you have to do is wait for someone to be willing to sell you a “lambo” for that amount. This might take a while (or it might not) but if Bitcoin just manages to keep on doing what it does, this day will happen. It is only a matter of time because, unlike “lambos”, bitcoins are scarce. Very scarce. Even absolutely scarce, which is a property of an asset that mankind has never encountered before. More and more people realize this which is why they’re reluctant to sell their bitcoins. The newly minted bitcoins that are mined every day need to be sold in order for the miner’s business models to work but the ones that are already in circulation tend to stay where they are because people value them a lot higher than what the current price in dollars or euros happen to be.

A good Medium of Exchange needs to be able to store value. The better it stores value however, the less likely people are to exchange it for something that isn’t likely to store value as well. Bitcoin’s value has such a large potential upside that people refuse to exchange it for frivolous things such as coffee or even mass produced cars. Contrary to what one might think, this doesn’t make it a bad Medium of Exchange. Quite the opposite. How often a Medium of Exchange is used is not the correct metric to look at when trying to measure its usefulness as such a medium. This misses the point. What should be measured is said medium’s ability to buy you as much or more than you bought it for at some point in time. Bitcoin is the only tool available that practically guarantees this. Fiat money, inflation and the ideas of John Maynard Keynes have distorted our perception of what money ought to be so much that we believe that how convenient it is to buy coffee with it, is the most important thing about it.

Looking only at the merchant adoption and spread of acceptance metrics, Bitcoin still seems to be struggling quite a lot. In reality, this is a non sequitur and has little to do with the actual success and functionality of the network. The price of a bitcoin, as shown by ticker widgets and market cap websites, represents the lowest current price that anyone is willing to accept on an exchange market. Only a very few bitcoin owners are willing to accept this price and most of them are waiting for a better opportunity. Bitcoin is indeed a currency, but it behaves very differently in comparison to all other currencies that preceded it. The fact that people are reluctant to use bitcoin for everything but a few, very important transactions is a proof of bitcoin’s monetary superiority rather than anything else. So forget about coffee, forget about whether you franchise burger joint accepts bitcoin and start focusing on what you can use this tool for. Bitcoin is a true grassroots revolution and it grows from the ground up, not the other way around.