Op Ed: In China, It’s Blockchain and Tyranny vs Bitcoin and Freedom 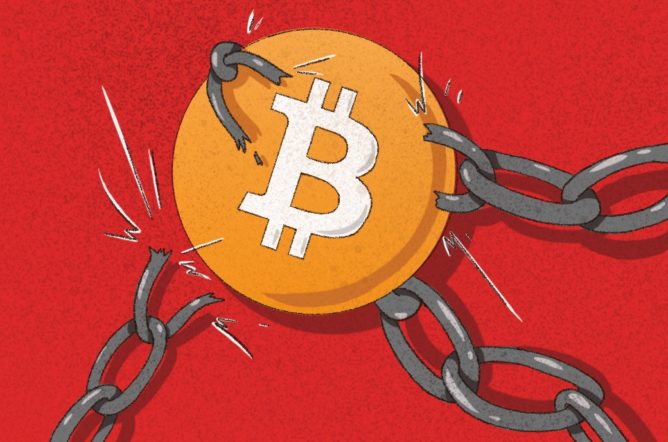 On October 24, 2019, President Xi Jinping gave a major speech about how China is going to make blockchain technology a national priority. He said China would “take the leading position in the emerging field of blockchain” and explore its use “in people’s daily life.” China’s most-watched daily news show covered the speech in primetime, and the next day, the People’s Daily propaganda newspaper ran a front-page story on Xi and blockchain. Searches for “blockchain” on China’s most popular browser Baidu rose 200 percent.

What’s essential to note is that the “blockchain technology” that Xi and his cadre are pushing is a very different type than the one that helps power Bitcoin. The ledger in the Communist Party’s blockchain won’t be updated by proof-of-work and Nakamoto Consensus, but by proof-of-authority. Xi’s blockchains will be highly centralized for maximum control and are meant to be tools for improved surveillance and social engineering. They couldn’t be any farther from Bitcoin, which is open-source, decentralized, censorship-resistant and pseudonymous.

A Blockchain-Based Digital Yuan: ‘Lipstick for a Panoptical Pig’

Unlike the internet — which Beijing can easily manipulate and censor — Communist authorities can’t control the price of bitcoin, and they haven’t been able to effectively stop their citizens from buying and selling the currency. So instead of an outright ban — which would create a huge black market and likely make bitcoin even more intriguing — they have decided to create a competitor. China’s rulers have chosen to try and get out in front of bitcoin and libra by launching a new digital yuan, blockchain only in name and only for marketing purposes. They want to ride the hype of a new technology, and use it as lipstick for a panopitcal pig.

According to leadership at the People’s Bank of China (China’s central bank, known as the PBOC), the goal of the digital yuan is to eventually replace the “M0” base money supply in China. Meaning: they want to replace all paper notes and coins with a digital version based on blockchain technology that’s easily surveillable, freezable and confiscatable.

Cash is already an endangered species in China, with the majority of all daily transactions happening via apps like Tencent’s WeChat and Alibaba’s AliPay. The transformation in payments over the past decade from paper cash to social media platforms has been very helpful for China’s police state, given that they can ask companies like Tencent for information on users any time. But a currency that, itself, is a surveillance platform — that would suit the state even better.

Today, the Communist Party is forced to work with third parties like commercial banks and technology companies to control and understand the flows of money. In a future scenario with a successful digital yuan, the Central Bank itself could have a real-time understanding of where all the nation’s currency is and where it’s going. This kind of omniscient financial surveillance is a dictator’s dream.

The main goals of the digital yuan blockchain project are clear and have been stated publicly by various government officials repeatedly over the past two years:

From what has been publicly revealed so far, the digital yuan will be minted by the PBOC and then sold to banks and companies, including Tencent and Alibaba. According to statements from PBOC leadership, users would download a mobile wallet and exchange their existing money for the new digital yuan. Then they could start using that for their daily spending habits.

Every time a transaction happens, the government would know about it in real time, instead of having to ask a third party. Transactions would be protected with cryptography to reduce theft, with only the formal owners being able to move assets. The exception, of course, would be Xi Jinping and the Communist Party, who would have a backdoor into anyone’s wallet.

At a time where the PBOC is running out of options to stimulate China’s economy in the event of another recession, the digital yuan could give them new ways to fight a downturn. Consider: They could, with the click of a button, put a chunk of new digital yuan precisely into the personal account of every university student or every auto worker. In this way, Communist Party officials would be using blockchain technology to prolong the lifespan of a regime that is built on cruelty and fear. Remember: Xi Jinping is currently presiding over the internment of millions of Muslim-minority Uighurs in prison camps; the ongoing and nearly complete cultural genocide in Tibet; the crushing of democracy in Hong Kong; constant threats to “solve” the Taiwan problem; and the expansion of the Belt and Road, the largest infrastructure project in human history, which is installing surveillance technology and telecommunications across the developing world in a wave of digital colonialism. To move the digital yuan forward, the Communist Party is already educating Chinese citizens about blockchain technology in a variety of ways. Xuexi Qiangguo — the most popular app on China’s Apple store — has added informational content on blockchains, just as state media and official government apps have popularized the subject. Just a few days after Xi’s big speech, the Communist Party even launched a new phone app (called “Original Intentions Onchain”) to encourage members to pledge their loyalty to the party “on a blockchain.” Behind all of this is Beijing’s overarching goal to strengthen control over its economy and exert financial sovereignty. Xi Jinping doesn’t want the U.S. dollar or libra or bitcoin in the leading global position. He wants to win the new currency space race, and he’s chosen to do it by putting the yuan on a centralized, digital ledger.

A Threat to Human Rights

Short term, this could be a big win for Xi and a big loss for human rights. If the technology works as planned, and can be rolled out fast enough, the digital yuan could soon be the financial backbone for not just all of China but for all of the dozens of “Belt and Road” countries from South Asia to Latin America. What’s more, China moving forward aggressively to create a digital national currency will spark ripple effects of interest from governments and corporations who may follow in Beijing’s footsteps and set up their own surveillance stablecoins.

We should have no doubts about their intentions or capabilities, and if we care about human rights and freedom, we should not cheer them on.

But long term, this could be a strategic blunder on a titanic scale. Bitcoin’s ability to separate money from state by creating a parallel economy beyond government control represents one of the only things that could challenge Xi Jinping’s totalitarian goals. And, unfortunately for him, it’s hard to imagine that he can preside over a massive public blockchain education program for hundreds of millions of people, without more and more of them eventually waking up and learning about Bitcoin.

A Trojan Horse for Bitcoin and Freedom?

It’s one thing to censor the internet. The regime can make mention of Tiananmen Square forbidden, and people by and large won’t risk their livelihoods to learn about what happened on June 4, 1989, and gossip to their friends about taboo topics. But it’s another thing entirely to keep people away from a well-performing financial asset with no barrier for entry. Governments can keep people off the internet, but it will be a lot harder to keep people off Bitcoin.

In “The Matrix,” the protagonist Neo is given a choice by Morpheus to take the blue pill and stay in his known world of comfort and safety, or take the red pill and risk going down the rabbit hole. The digital yuan is the blue pill. And there are many people who are fine with the blue pill — perhaps even a large majority — who are happy to comply with the rules and who don’t want to risk their comfortable, convenient situation by doing anything that could put their status quo in jeopardy.

But there are also plenty of Neos in the world, and there will be many people who want to take Bitcoin’s red pill, especially when it’s uncensorable, hard to track, and increasing in price year-by-year against a digital yuan whose value may struggle.

The Communist Party wants to ride the “blockchain” hype cycle and create a new currency of unprecedented surveillance and control. And they may succeed, at least in the short term. We should have no doubts about their intentions or capabilities, and if we care about human rights and freedom, we should not cheer them on. The only silver lining is that ultimately, the digital yuan may end up being one big Trojan Horse for Bitcoin, where Satoshi Nakamoto — not Xi Jinping — gets the last laugh.