How to Resist Censorship with Bitcoin

This is an excerpt from a presentation I gave at the 2019 Magical Crypto Conference.

Some time ago, I was arguing with a nocoiner on the internet, and he brought up the usual FUD, with the Nazis and North Koreans and global warming. But then he said something that made me think. He said, any defense of bitcoin is morally bankrupt. And I thought, that’s exactly right. Bitcoin is completely devoid of morals. Good. Because money shouldn’t have morals. We’re building a global currency, not roleplaying Model UN. And that’s everything that’s wrong with fiat money today. 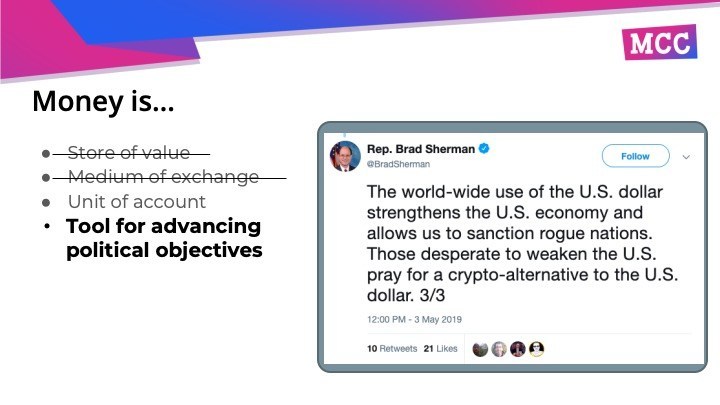 Money has suffered from feature creep. Economists like to define money as filling three roles – store of value, medium of exchange, unit of account — but the function of money has changed over time. The US dollar hasn’t been a store of value for decades; in fact it’s designed to depreciate at 2% a year to encourage consumerism. And exchange is now mostly done on credit. What we do have is the standard unit of account for international finance. If everyone’s using the dollar, we can weaponize it to coerce certain behavior. Advancing political objectives, is the dollar’s most important use case. Congressman Sherman gets it.

Mostly we do this by economically isolating a group of people we don’t like. This can be anything from embargoing a whole country to Governor Andrew Cuomo and his sanctions against the NRA. As a result, the NRA lost their insurance and banking services in New York. Then there was Operation Chokepoint, a 5-year program where the Justice Department investigated banks for doing business with politically incorrect customers like gun dealers and payday lenders. An investigation isn’t the same thing as a ban, but by imposing extra requirements to serve these customers, it ends up having same effect. 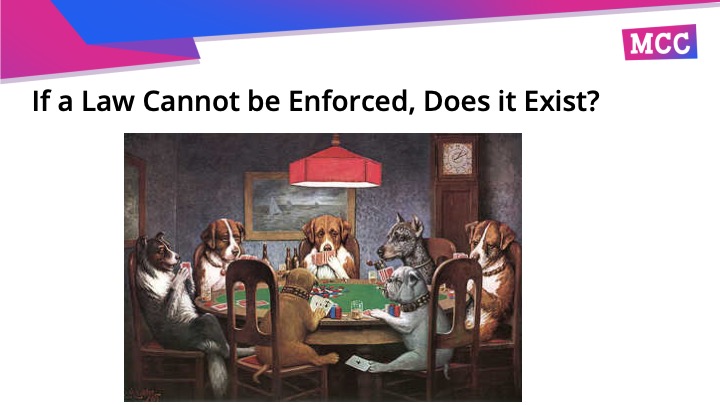 Here in the US we have the 4th Amendment, which says the cops can’t come search your home without a warrant. It protects us from having cops randomly barge into our homes, but more importantly it limits the state’s power to regulate. Even if the government did want to overreach and make rules about what we do in the privacy of our homes, there’s no way to enforce those rules. So we can invite some friends over for drinks and cigars and play a game of poker with real money. In theory that’s illegal. In practice, the cops can’t do anything about it unless I invite them in. The government effectively has no say in the matter when it comes to peer-to-peer cash. Decentralization may not limit regulation, but it limits the enforceability of regulation. 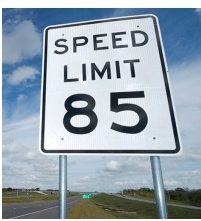 A lot of the laws we have are self-enforcing. And by that I mean, most of us go through life without ever shoplifting or murdering anyone, and we manage to do this without cops on every street corner. We do this because there’s a societal consensus about what we shouldn’t do. On the other end of the spectrum you have something like speed limits. Technically it’s illegal to speed, but everyone speeds and mostly no one gets caught. In fact if you stay below the speed limit you’re probably pissing off a lot of people behind you. The government can’t put a throttle limiter in every car. So if a speed limit is unenforceable then a speed limit sign is basically fake news. Same with money laundering. It’s the world’s third largest industry after oil and agriculture. This is exactly what happens when you have laws that are too dumb to enforce. The only thing you can do to stop it is make more rules that everyone will go on ignoring. 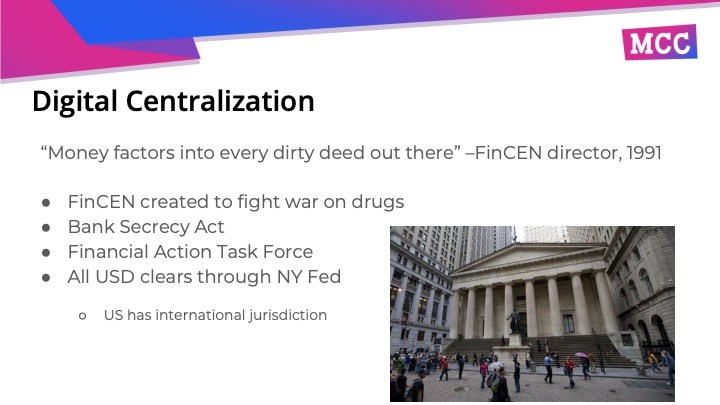 Our self-regulating ways started to change in the 80s and 90s. Banks began storing account information in IBM mainframes instead of filing cabinets. Not only do computers make it easier to report suspicious activity, but they make it really easy to create blacklists. When the government realized it was losing the War on Drugs, they didn’t say, “Wow I guess this rule is too stupid to enforce,” like they did with Prohibition. They made FinCEN, which is basically a big data agency. FinCEN collects data from banks, credit bureaus, all the different law enforcement agencies. If all our transactions go through regulated financial institutions, then it’s suddenly really easy to enforce stupid rules that no one would otherwise follow. And we can do it to anyone on the planet with an international bank account. 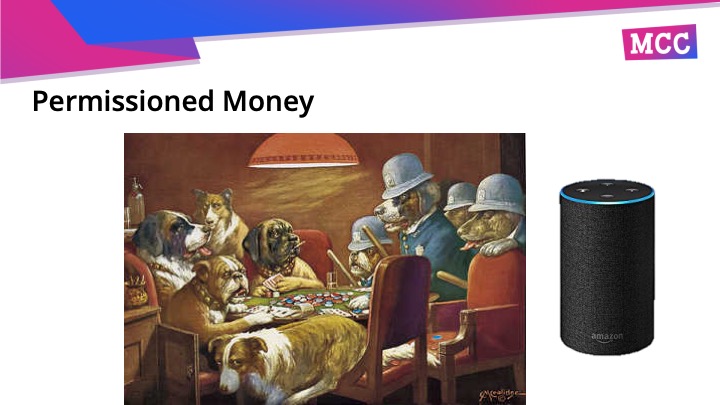 The end result is that there might as well be cops permanently stationed in your living room. Or an Amazon Echo, same thing. 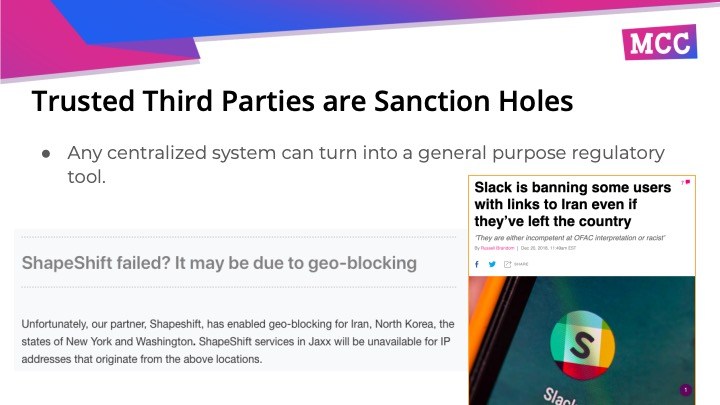 If a third party service presents an easy way to enforce dumb rules, of course regulators are gonna take advantage of it. Regulators are lazy; that’s why they invented sanctions in the first place. 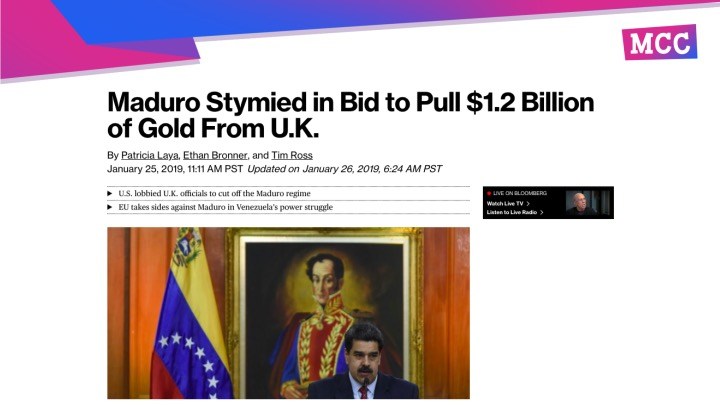 Even gold isn’t safe anymore. Well it’s safe if you hold your own gold, but this is why you don’t store your gold with the Bank of England. Venezuela kinda screwed itself with the whole socialism thing, but here they’re trying to fund imports to feed their citizens and the US lobbied the Bank of England to cut them off. 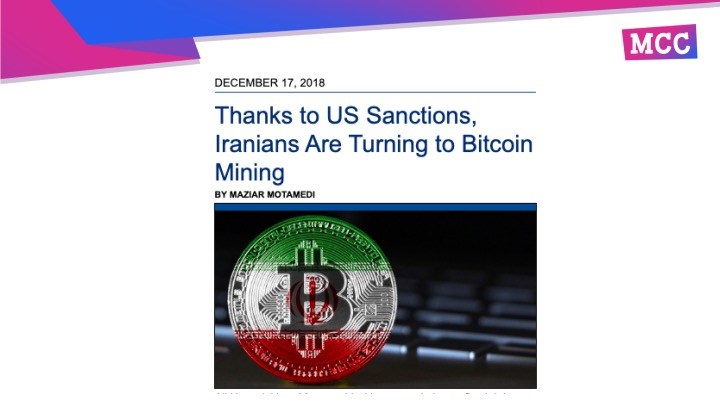 You can’t enforce sanctions if you can’t deputize the banks. 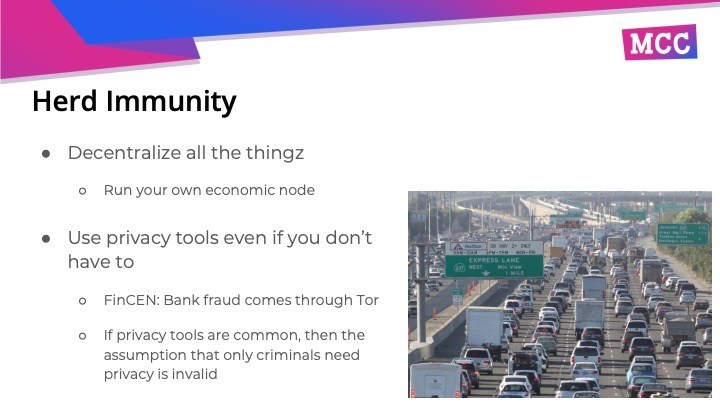 We already know to run our own node, be our own bank. Even if Coinbase meets your needs, decentralization gives us herd immunity. If no one uses Coinbase, then Coinbase can’t be used for law enforcement. Same goes for privacy. Right now, most bank websites won’t let you log in if you connect through Tor. A few years ago FinCEN did some analysis on IP addresses logged in the suspicious activity reports filed by banks, and found that a lot of sketchy stuff came through Tor. Now anyone who uses Tor is treated like a criminal. Next they’ll be looking at VPNs. If everyone speeds, no one gets busted just for speeding. If everyone uses privacy tools, then no one gets flagged as a criminal just for using privacy tools. 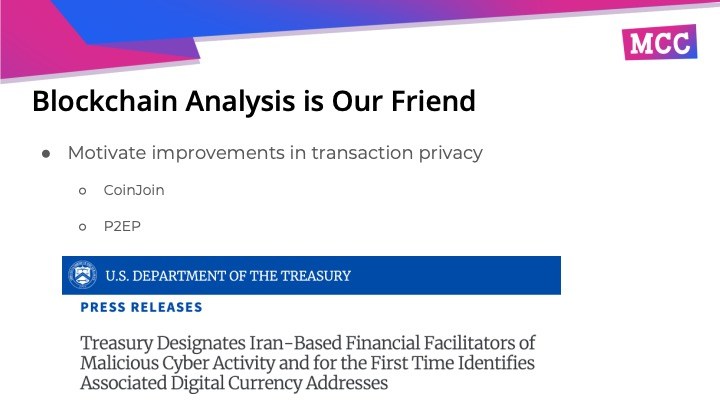 Blockchain analysis companies have gotten really good at tracing the provenance of Bitcoin through inputs and UTXOs, and convinced the Treasury Department that a good way to sanction Iranian hackers is to blacklist a couple of bitcoin addresses. The guy controlling these addresses already generated a new wallet and bragged about it to the New York Times, so even they know not to reuse addresses. Bitcoin developers have come up with better ways to improve transaction privacy. CoinJoin combines multiple Bitcoin payments from multiple spenders into a single transaction. Another proposal is pay-to-endpoint (P2EP) where both the Sender and Receiver contribute inputs to a transaction. The goal is to break the ability to identify the sender and receiver of a transaction. If enough people create transactions where senders can’t be identified from the inputs, then blockchain analysis tools will become like those old-school polygraph tests, where they generate so many false positives that they completely lose credibility and are regarded as junk science, no longer admissible in a court of law. 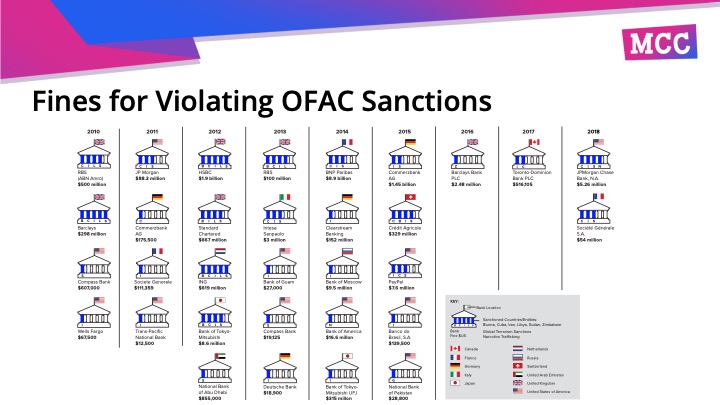 We can also learn from financial institutions. Over the last decade, banks have paid something like $20 billion in fines for sanctions violations. OFAC sanctions, they’re like ransomware for banks. Most of these are international banks serving international customers. They don’t always appreciate it when we recruit them to further our foreign policy. 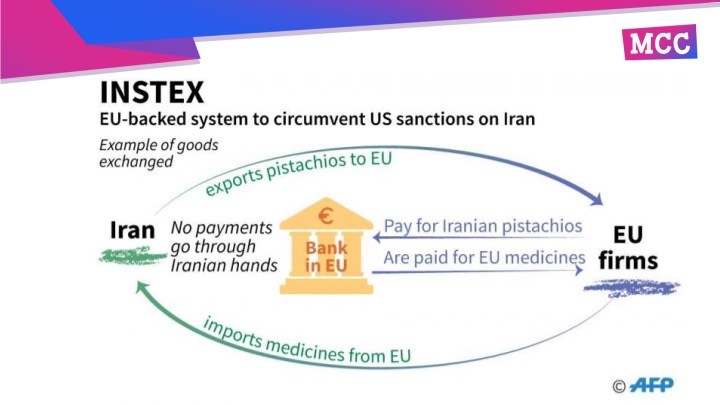 In Europe, banks set up a special purpose vehicle so European companies can transact with Iranian businesses without violating sanctions. A business in Paris might want to buy oil from Iran, and a pharmacy in Berlin might want to sell medicine to Iranians. Instex is a clearinghouse that matches credits and debits for these businesses, they settle their payments locally, and specific cycles are formed so no money ever transfers across the border. 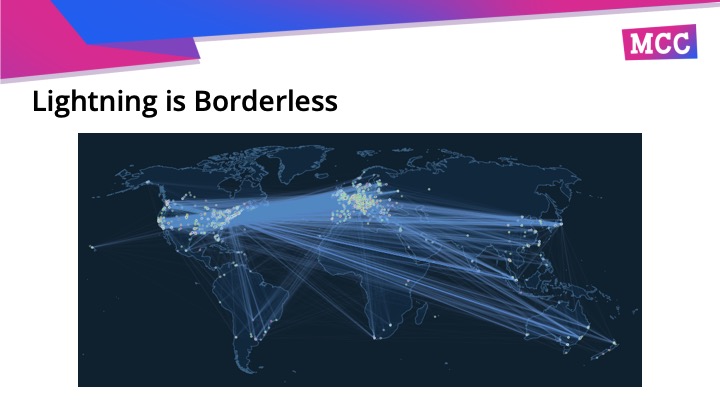 It looks a lot like Lightning. As a network, Lightning serves as a clearinghouse where payments are routed all around the world, but actual settlement only happens when two nodes close a channel on the blockchain. This map shows public nodes and channels, but there are tons of non-public nodes and channels and no one needs to know what happens in the clearinghouse. We can create specific cycles in the Lightning network where we spend and stack sats and only rarely return to the main settlement layer. 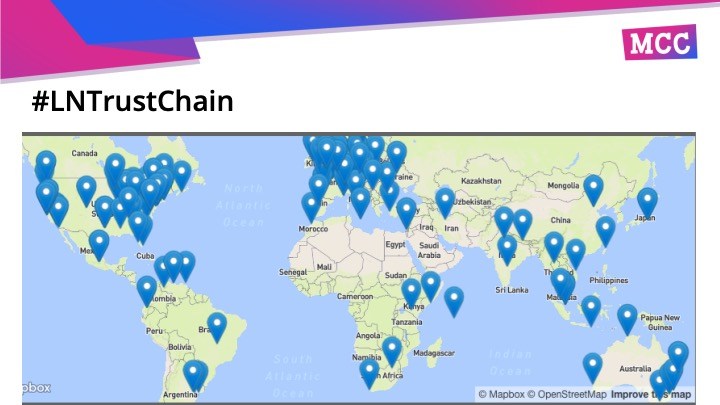 Earlier this year we had LNtrustchain, which went all over the world to Iran, then Israel, and ended up in Venezuela. We have a map of the Lightning torch journey, but if participants hadn’t advertised themselves on Twitter, no one would have been able to trace the torch. 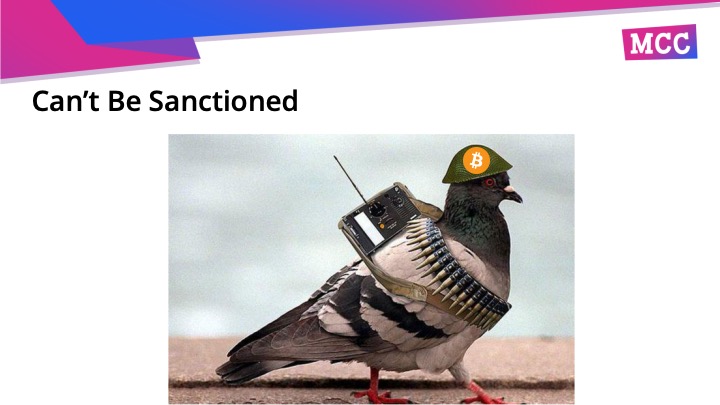 The goal is not to use Bitcoin to evade sanctions or break the law, cuz we should all be law-abiding citizens. The goal is to make it so that financial censorship is no longer a thing. If no one can be forced into economic isolation, then announcing sanctions will be about as silly as thinking you can stop people from playing poker in their living rooms.