By Yassine Elmandjra on ARK Invest

More than eleven years after its creation, Bitcoin is struggling to gain widespread institutional acceptance. While constructive criticism is healthy, ARK believes that some influential financial research institutions are dismissing bitcoin based on stale information, incoherent arguments, and flawed analysis.

Given Goldman Sachs’ recent stance on Bitcoin, ARK is revisiting the most common misperceptions weighing on its acceptance. We look forward to participating in healthy and educational debates about bitcoin and the important role we believe it deserves in well-diversified portfolios.

ARK believes that some influential financial research institutions are dismissing bitcoin based on stale information, incoherent arguments, and flawed analysis.

Claim: bitcoin is too volatile to serve as a store of value.
Counter-Claim: bitcoin’s volatility highlights the credibility of its monetary policy.

Critics often point to bitcoin’s volatility as a “store-of-value deal breaker.” Why would anyone want to store value in an asset with such dramatic swings in its day to day price?

In our view, these critics do not understand why bitcoin is volatile and why its volatility is likely to diminish.

While distracting naysayers from assessing its role as a store of value, bitcoin’s volatility actually highlights the credibility of its monetary policy. The Impossible Trinity, a macroeconomic policy trilemma, explains why. As illustrated below, the trilemma postulates that, when formulating monetary goals, policymakers can satisfy two out of three objectives, not all three, as the third will contradict one of the first two. 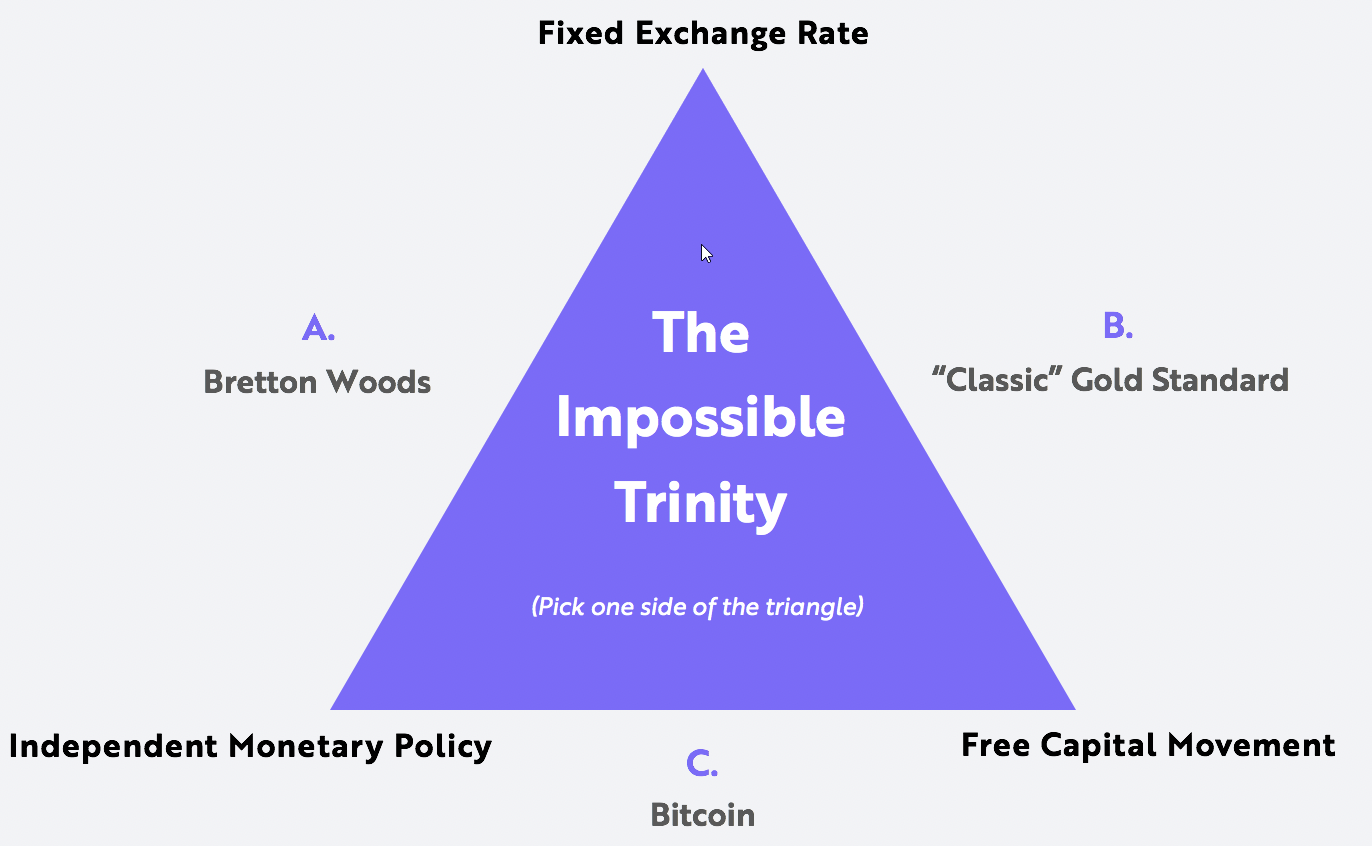 Based on the trilemma, we can understand why volatility is a natural consequence of Bitcoin’s monetary policy. In contrast to modern central banking, it does not prioritize exchange rate stability. Instead, based on a quantity rule of money, Bitcoin limits the growth of money supply and allows the free flow of capital, forgoing a stable exchange rate. As a result, bitcoin’s price is a function of demand relative to its supply. Its volatility should come as no surprise.

That said, bitcoin’s volatility is diminishing over time, as shown below. As its adoption increases, the marginal demand for bitcoin should become a smaller percentage of its total network value, diminishing the magnitude of price swings. All else equal, for example, $1 billion in new demand on a $10 billion market capitalization, or network value, should impact bitcoin’s price more significantly than $1 billion in new demand on a $100 billion network value. Importantly, we believe volatility should not preclude bitcoin as a store of value, primarily because it typically has coincided with significant upward moves in its price. 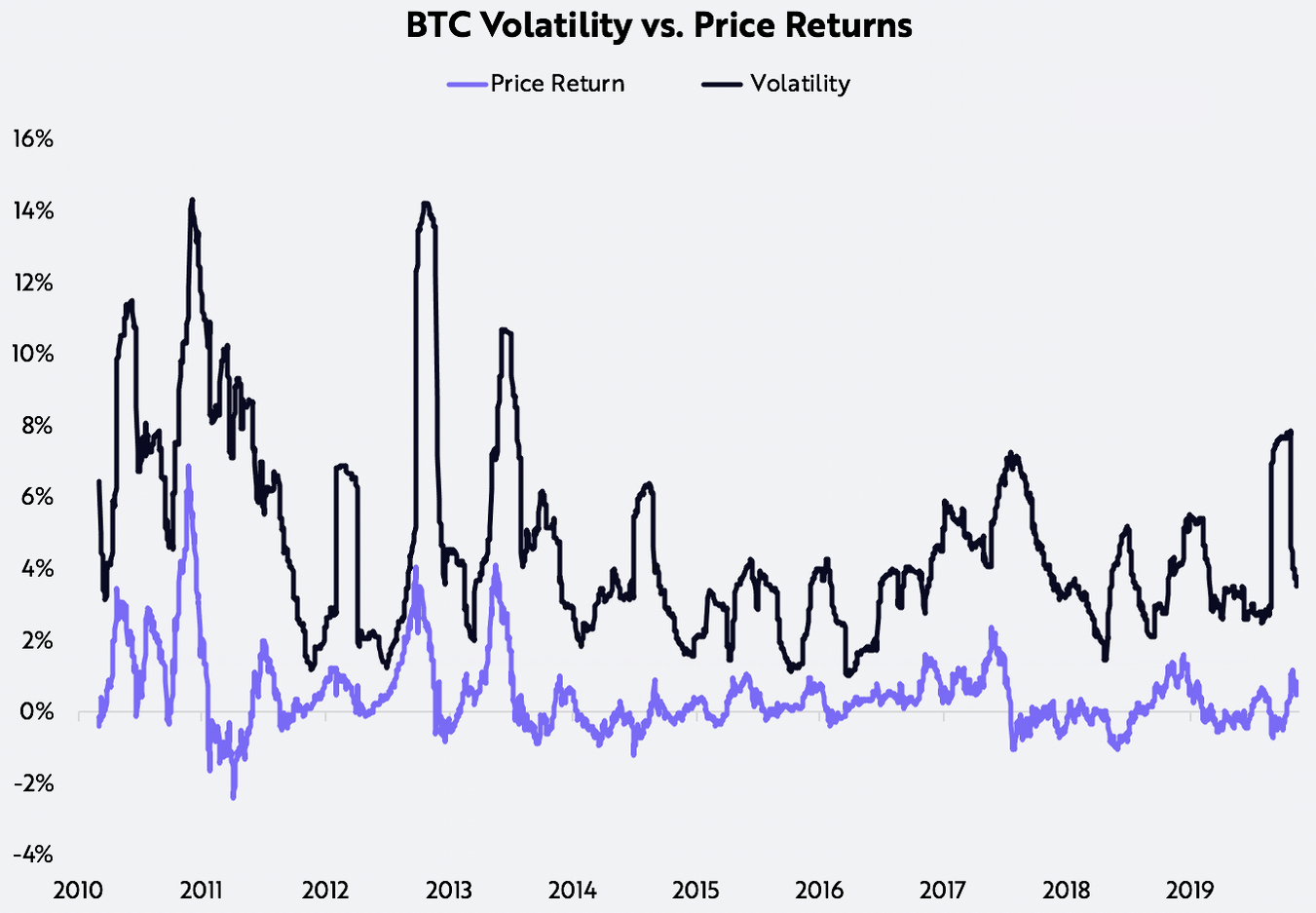 Over long time horizons, bitcoin’s purchasing power has increased significantly. Since 2011, for example, the price of bitcoin has compounded at an annual rate of roughly 200% and, despite significant intra-year moves, it has appreciated on a year-over-year basis every year since 2014 as measured by its lowest value of the year. 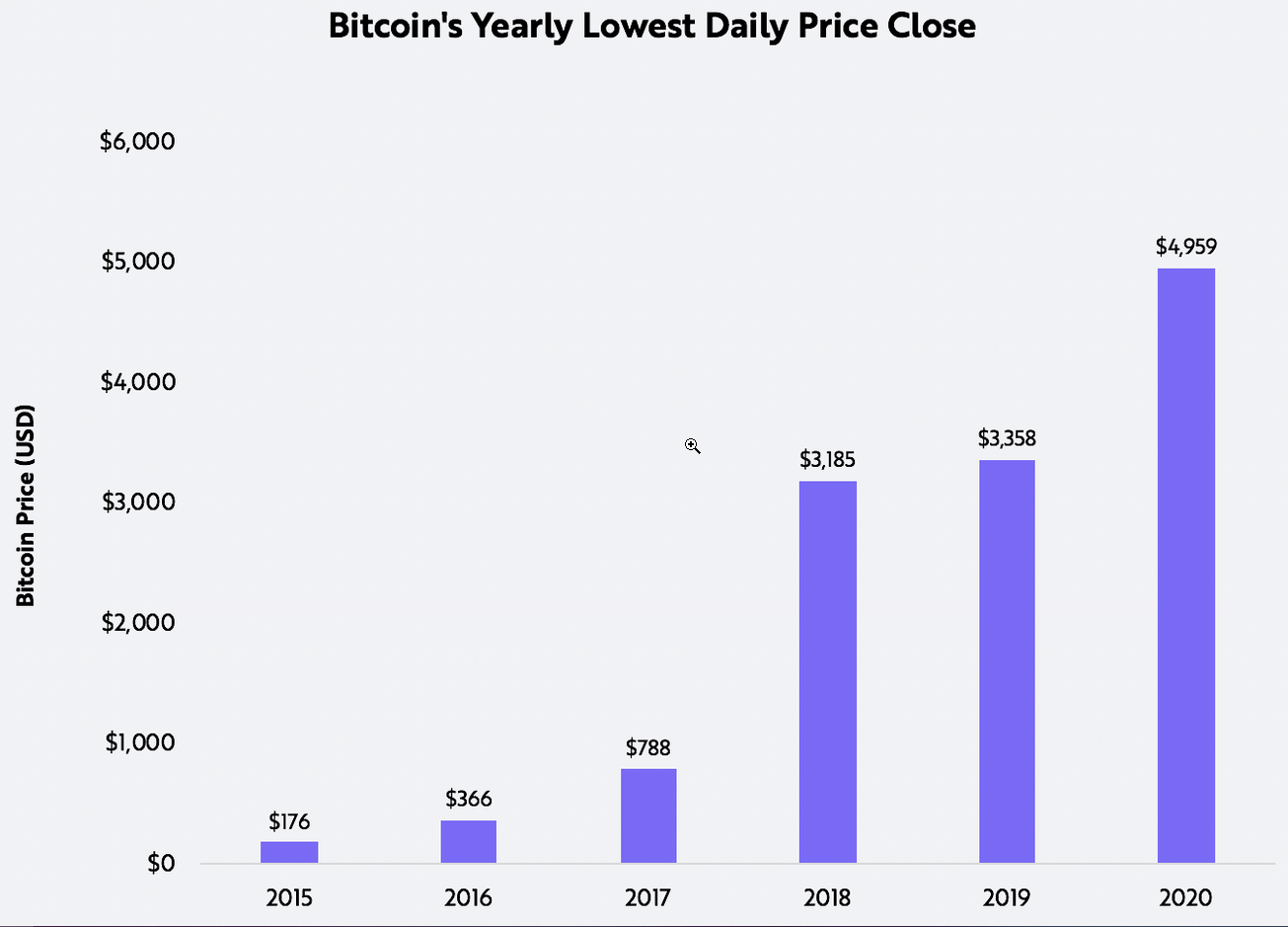 Some economists like Nouriel Roubini argue that bitcoin is in a bubble that will pop and disappear. The line of reasoning is that bitcoin has no intrinsic value, its appreciation dependent on speculation like a game of hot potato or tulips and “a greater fool” willing to pay a higher price. In their view, bitcoin is not an investable asset.

We believe this argument dismisses the reason why bitcoin accrues value over time. True, bitcoin does not behave like a traditional investable asset.[1] Equity values are determined by discounting expected cash flows. Given higher future cash flows based on growth and/or returns on invested capital, equities appreciate independent of their shareholder bases.

Claims that the value of money relies exclusively on a shared illusion, however, suggests that its form is arbitrary. In reality, according to monetary history, the most common and sustainable monies possessed qualities that sustained their demand. For thousands of years, for example, economists have recognized gold as the most successful form of money, thanks to its scarcity, fungibility, and durability.

Often called digital gold, we believe bitcoin not only shares many of gold’s characteristics but also improves upon them. While scarce and durable, bitcoin also is divisible, verifiable, portable, and transferable, a range of monetary characteristics that confer superior utility, potentially driving demand and deeming it suitable, if not superior, for the role of global digital money.

We believe as a suitable contender for the first global digital money, bitcoin should attract demand similar, at a minimum, to that for gold. Yet, contrary to claims that it is in a massive bubble, bitcoin’s network value – or market cap – is less than 2% that of gold’s, as shown below. 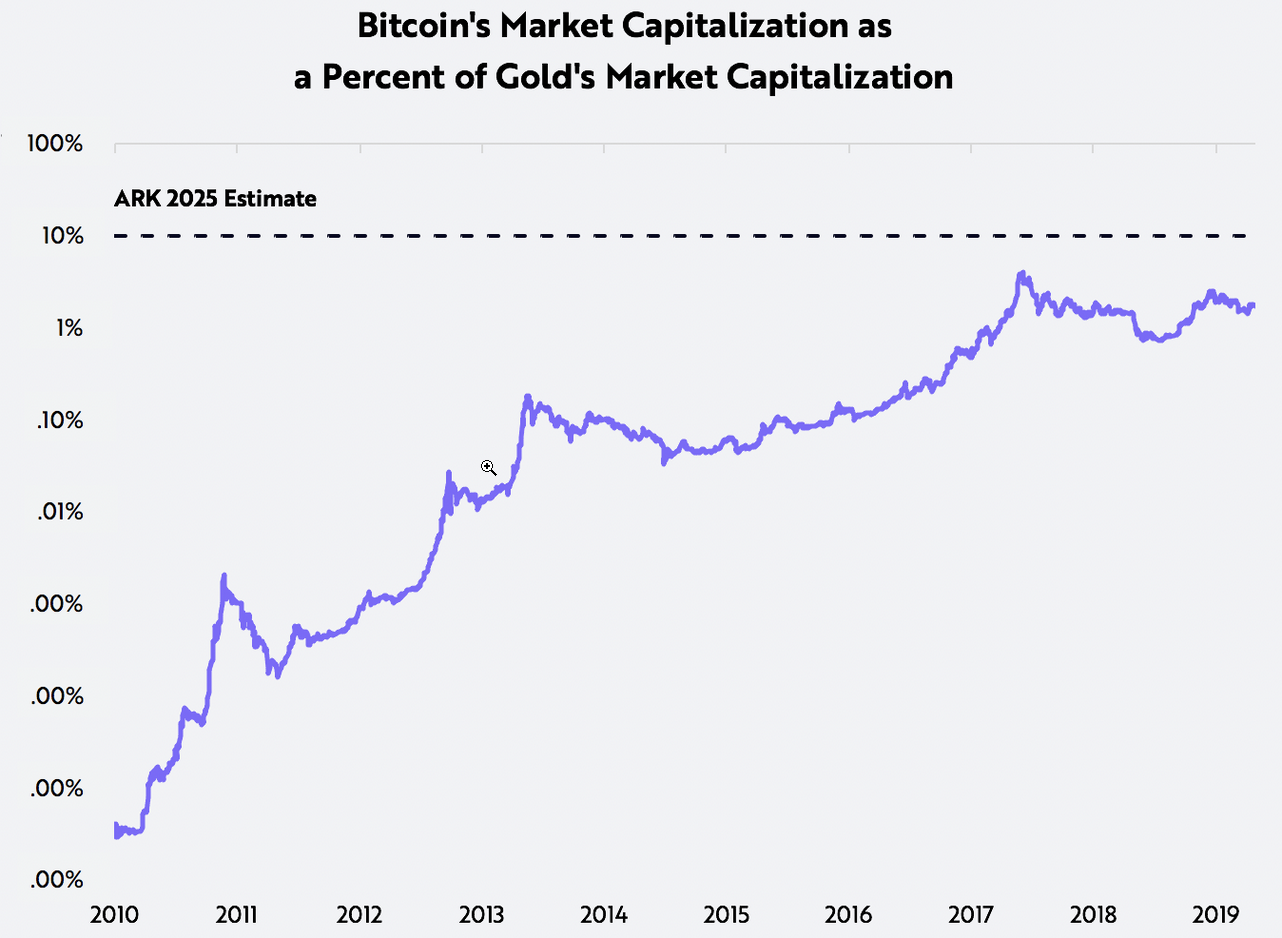 Forecasts are inherently limited and cannot be relied upon.

In the digital realm, goods are intangible and can be copied easily without destroying the original. An individual can email a word document widely, for example, while preserving the original copy. Likewise, millions of people can listen to a song simultaneously and repetitively, actually enhancing the value of the original, especially as other songwriters mimic its differentiated sound.

Bitcoin’s software is no different. It is free and open source. Individuals can copy the software, “forking the network” and creating their own version. Yet, skeptics still ask how bitcoin can be scarce if it is based on open source software that can be copied ad infinitum?

First, forking the Bitcoin network does not create new bitcoin units, much like inflating the Venezuelan bolivar does not add dollars to the US monetary base. Instead, forking Bitcoin creates a new network with new units or coins. While existing bitcoin holders have rights to the new coins, the forked network operates under an independent set of rules supported by unique stakeholders. Instead of diluting the money supply of the original network, open source software encourages not only inexpensive experimentation and new networks, but also new coins and a competitive market.

Bitcoin’s scarcity is critical to its network. Now at 18 million units, the number of bitcoin is mathematically metered to top out at 21 million units, as shown below. Each bitcoin is linked to one wallet at a time and cannot be copied.  Importantly, the only way to control a user’s bitcoin is to have access to its associated private key. 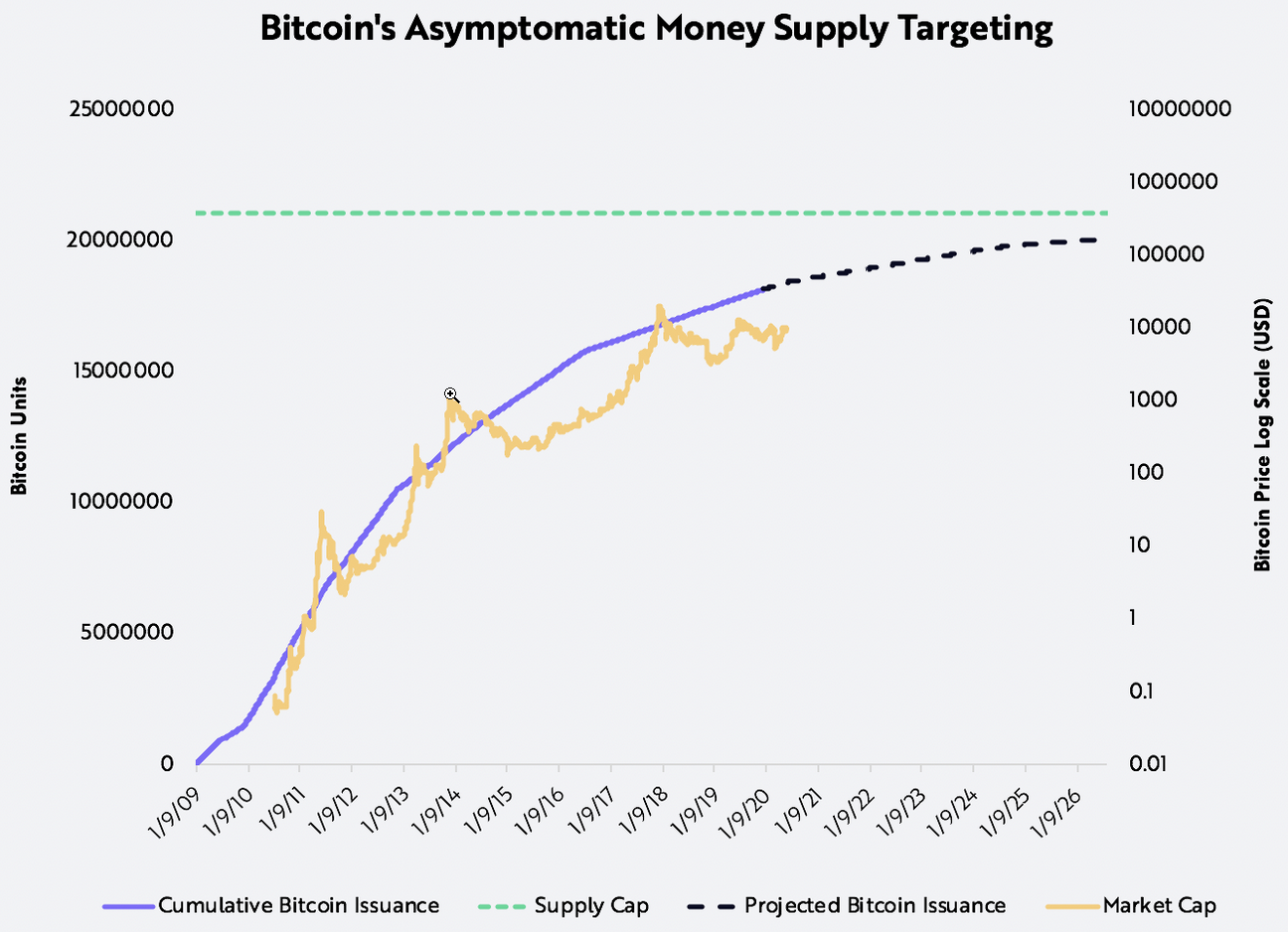 So, as it forks, what makes the 21 million units in Bitcoin’s network more valuable than the 21 million units in a Bitcoin (BTC) fork like Bitcoin Cash (BCH)? Equating the value of Bitcoin Cash to the value of Bitcoin would be equivalent to assuming that Facebook’s source code could “fork” and automatically duplicate the value of its 2.6 billion users and 50,000 employees. Their value stems from Bitcoin’s and Facebook’s network effects, not just their existence.

In the case of Bitcoin, we believe network effects include not only the hashrate dedicated to securing the blockchain, but also bitcoin’s liquidity and the infrastructure supporting its adoption and usage. If dilutive, the fork would have to take share of Bitcoin’s hashpower, users, and liquidity. As shown below, Bitcoin Cash and other forks appear to have failed to derail Bitcoin’s network effect. 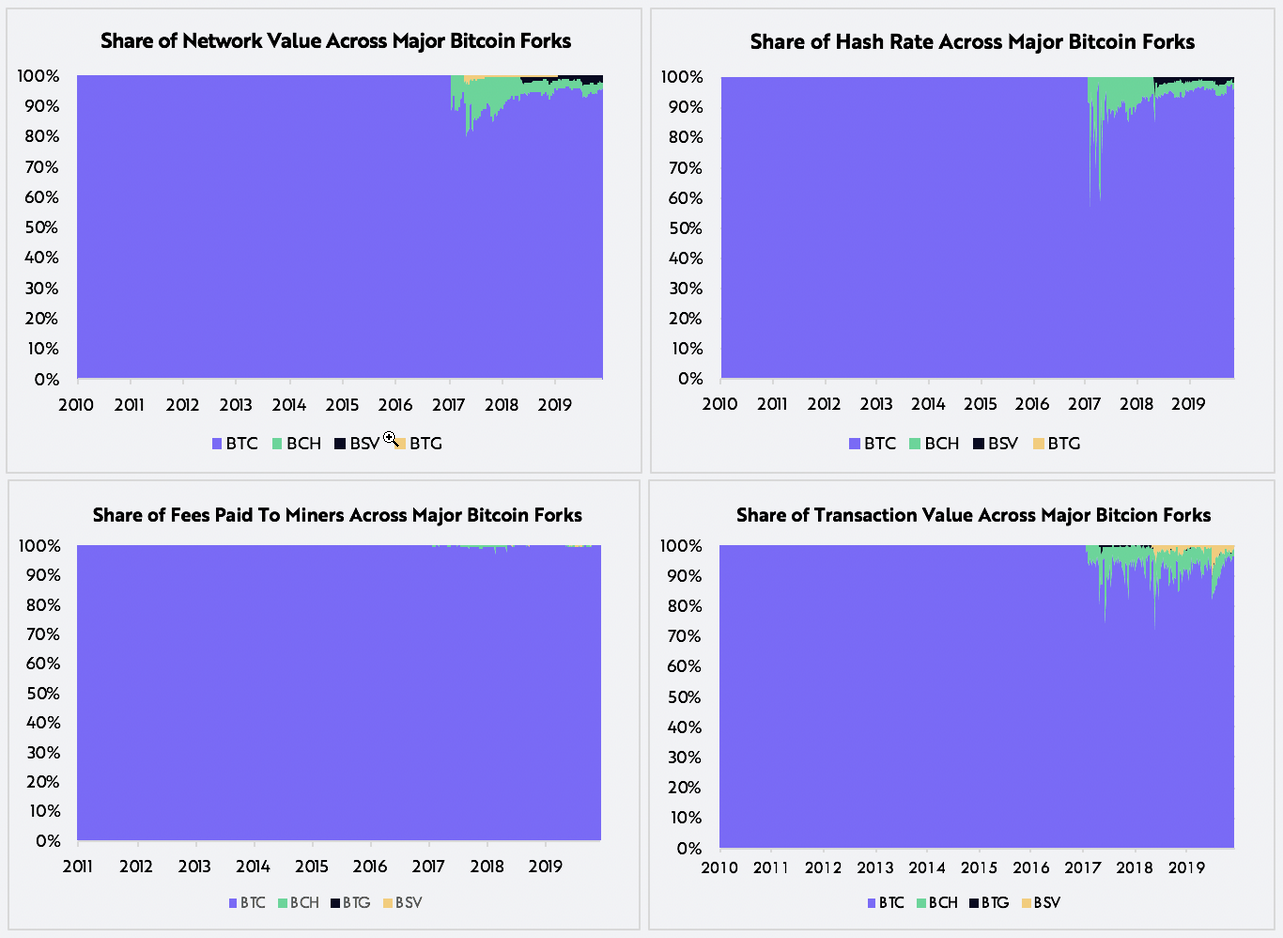 We believe that to criticize Bitcoin for facilitating criminal activity is to criticize one of its fundamental value propositions: censorship-resistance. As a neutral technology, Bitcoin allows anyone to transact and cannot identify “criminals”. Instead of relying on a centralized authority to identify participants by name or IP address, it distinguishes them by cryptographic digital keys and addresses, conferring upon Bitcoin strong censorship-resistance. As long as participants pay fees to miners, anyone can transact anywhere at any time. Once secured, the transaction cannot be easily reversed. 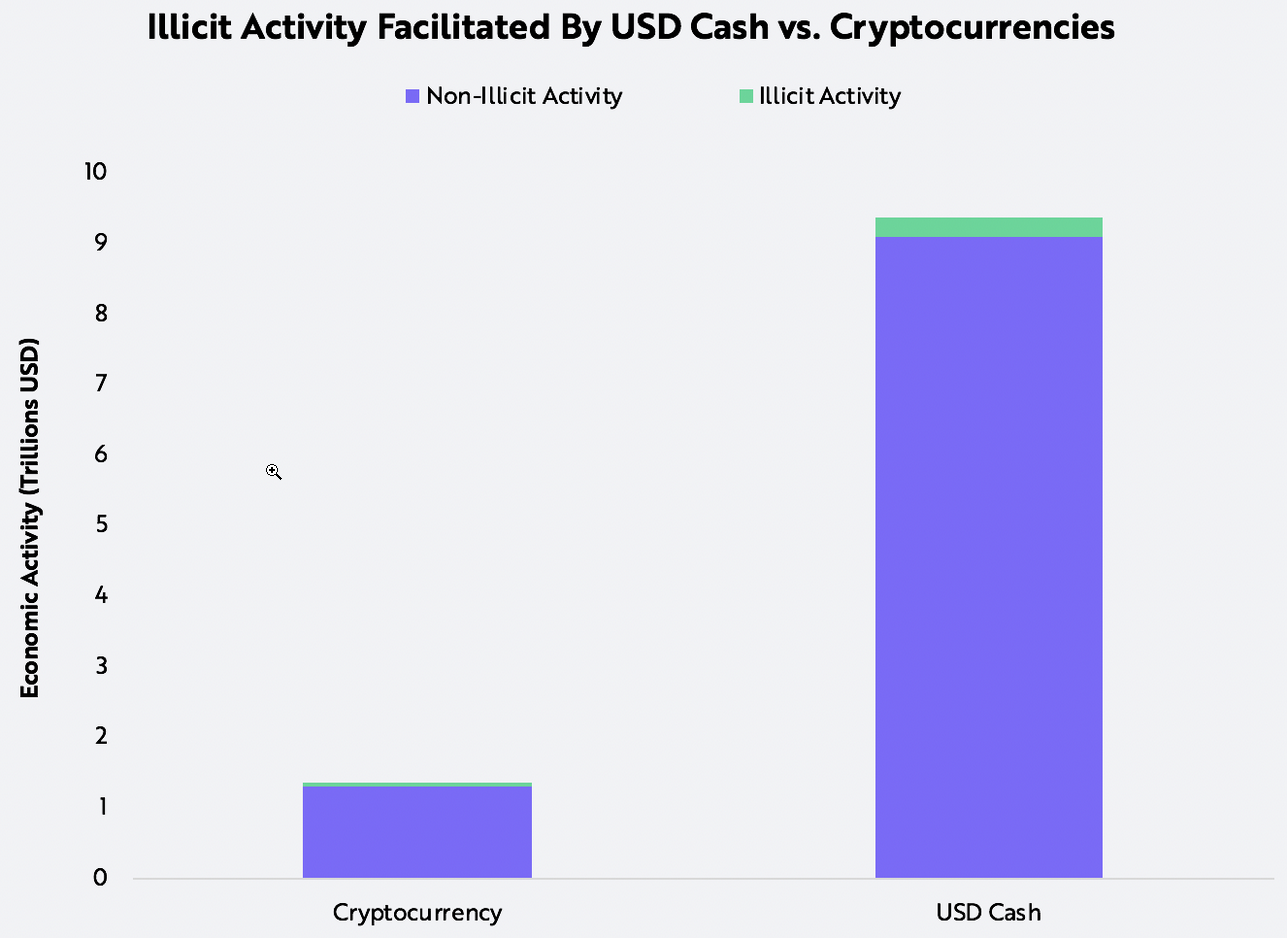 Claim: Bitcoin wastes too much energy.
Counter-Claim: Bitcoin’s energy consumption is more efficient than that of gold and traditional banks.

Bitcoin critics often assert that mining consumes more resources, specifically energy, than the benefits it creates. What critics deem computationally inefficient and unscalable, however, advocates consider not only an intended tradeoff but a fundamental feature. As highlighted by founder of Bit Gold and Bitcoin pioneer, Nick Szabo, “Prolific resource consumption and poor computational scalability unlock the security necessary for independent, seamlessly global, and automated integrity.”

ARK believes that Bitcoin has a unique ability to provide settlement assurances in a decentralized – or trust-minimized – manner because specialized, dedicated hardware proves transparently that the computer has executed a costly computation.

Bitcoin makes the tradeoff explicit: by allocating significant real-world resources to mining, we believe the network guarantees settlement like none other. In The Anatomy of Proof of Work, Chaincode Labs resident Hugo Nguyen explains, “Under the hood, proof-of-work mining converts kinetic energy (electricity) into a ledger block. By attaching energy to a block, one gives it ‘form’, allowing it to have real weight and consequences in the physical world.” 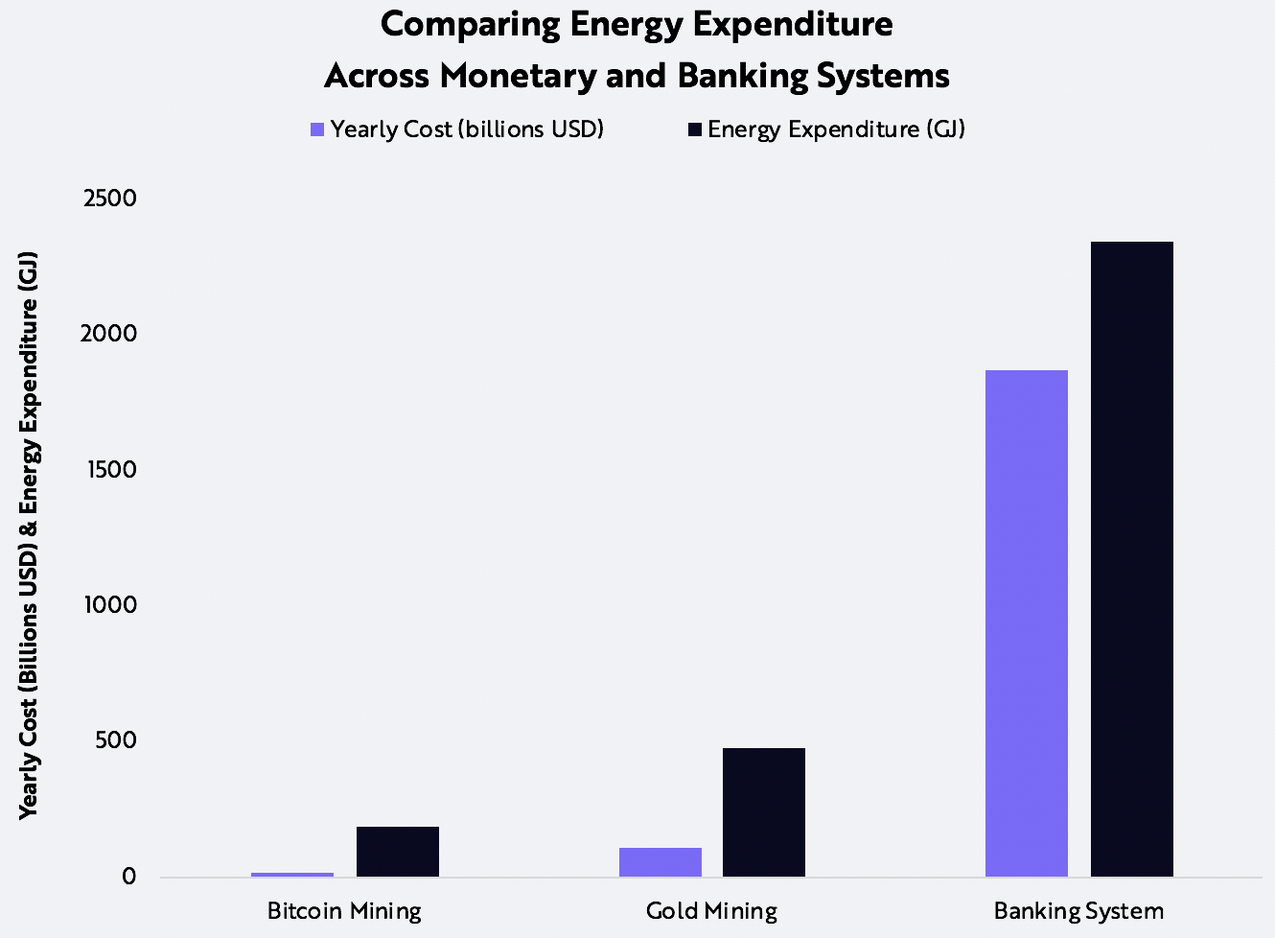 Contrary to consensus thinking, we believe the environmental impact of bitcoin mining is di minimis. Renewables, particularly hydroelectric power, accounts for a large percentage of bitcoin’s energy mix. As Castle Island Ventures partner, Nic Carter, has noted, in their search for the cheapest form of electricity, miners will continue to flock to regions offering a glut of renewable electricity, unlocking stranded energy assets as “electricity buyer[s] of last resort, creating a highly mobile base-demand for any electricity sources able to produce at prices below current producers, regardless of location.” As a result, from a climate perspective, bitcoin mining could be a net positive.

Bitcoin’s complexity should not prevent financial institutions from analyzing it in depth. In this piece, we have discussed some of the most common objections to Bitcoin, hoping to stir conversation and debate in the institutional investment community. As the Bitcoin network continues to mature, we believe that it will cement bitcoin’s role as an emerging monetary asset and that financial institutions will do well to consider it seriously.