>You will not find a solution to political problems in cryptography.

Yes, but we can win a major battle in the arms race and gain a new territory of freedom for several years.

Governments are good at cutting off the heads of centrally controlled networks like Napster, but pure P2P networks like Gnutella and Tor seem to be holding their own.

“The day will be hard,” said Robert-François Damiens the morning of his execution in consequence of having tried to assassinate King Louis XV of France. He was condemned to be “taken and conveyed in a cart, wearing nothing but a shirt, holding a torch of burning wax weighing two pounds;” then, “in the said cart, to the Place de Grève, where, on a scaffold that will be erected there, the flesh will be torn from his breasts, arms, thighs and calves with red-hot pincers, his right hand, holding the knife with which he committed the said parricide, burnt with sulphur, and, on those places where the flesh will be torn away, poured molten lead, boiling oil, burning resin, wax and Sulphur melted together and then his body drawn and quartered by four horses and his limbs and body consumed by fire, reduced to ashes and his ashes thrown to the winds.”

You may or not like Michel Foucault’s political career or ideas, but what is indisputable is the novelty of his exhaustive work in deciphering power relations. In his book “Discipline and Punish” he begins by describing the martyrdom of Damiens. Foucault quotes the testimony of several people and it seems that the execution was much crueller than was dictated. 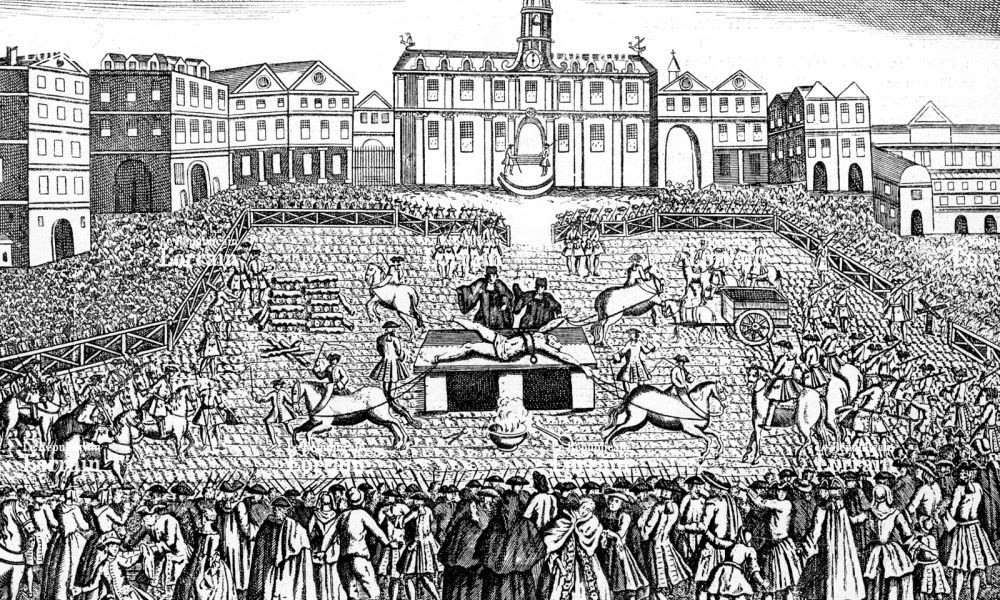 The execution of Damiens

Nowadays the justice system applied by the state may seem kinder in comparison to thunderous and sadistic practices of the 16th century. Many who appreciate this transformation would attribute it to an enlightened position of greater humanization and progress. Foucault disagrees.

Let’s start with Damiens. Why was his execution so violent and excessive? Yes, he attempted to kill the King, but to us, the punishment seems beyond the measure of his crime.

It will be necessary to understand that punishment was and is not merely punitive retaliation, but a political ritual.

In the past, the laws were identified as the will of the sovereign. If you broke the law, you were basically rebelling against the sovereign’s persona. And to do so, you were threatening the monarch’s integrity by not respecting his or her law, thus it would have been necessary to exercise a symbolic and very public show of violence.

The problem is that while this symbolic show demonstrates the power of the king, it also demonstrates its limitations. Every time someone committed a crime the machinery of punishment had to be reactivated. The sovereign’s power was great but inefficient.

There was always the risk that people would sympathize with the condemned and start riots and disasters in support of him or her, motivated again, by the irregular and inefficient execution of power.

The prison system developed in the age of enlightenment (now the law identifying itself with the Social Contract instead of the sovereign) made the exercise of justice more methodical and meticulous in its administration. A system that can be executed efficiently, in private, and with predictable consequences. However, the political ritual is not gone. There are thousands of cases that could be cited to exemplify this, but a very significant one was the double life imprisonment plus 40 years without the possibility of parole that Ross Ulbricht, founder of Silk Road, received in 2015.

For those that may not be familiar with Silk Road, it was an e-commerce website for voluntary exchanges, with emphasis on user security and anonymity. It was launched in 2011 and employed two key technologies: Tor and Bitcoin. Ross envisioned Silk Road as a free-market economic experiment, an open platform driven by its user community. He believed that “people should have the right to buy and sell whatever they wanted so long as they weren’t hurting anyone else.”

The guiding philosophy of the site was that it is no one else’s business who you are or what you are buying and selling as long as the transaction is voluntary and no third party gets harmed. You could find all kinds of items on the site, both legal and illegal. Individuals could purchase drugs like Cannabis and mushrooms straight from small growers around the globe. However, things like weapons or child pornography were emphatically prohibited. 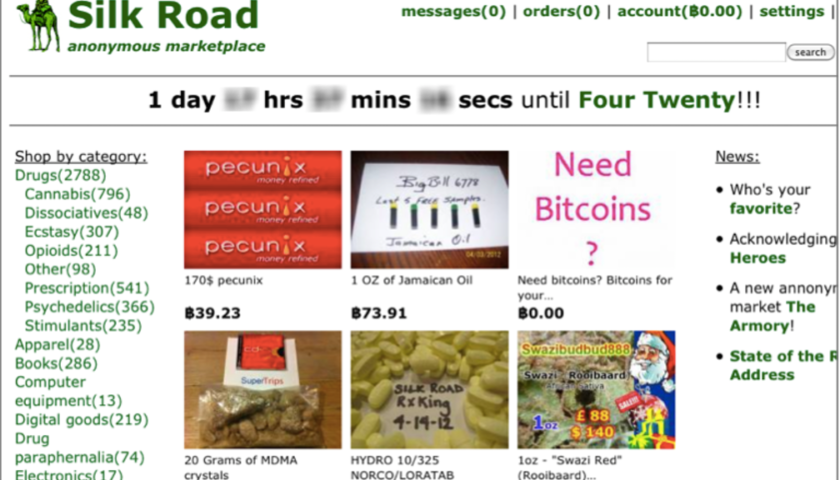 Ulbricht, being an American citizen, knew he was doing something risky. There was no way to avoid a sentence against him. But why such an excessive exercise of power? It gets more intriguing when you look at the information liberated by the team advocating for Ross’ release. Ross was only the founder of the site, and he wasn’t even managing it by the time the marketplace attracted more traffic and therefore more volume of money. Furthermore, it is presumed that “the prosecution’s forensic evidence was below amateur level”; besides having violated Ross’ rights to obtain this evidence, the judge precluded any mention of the corrupt agents at the core of the investigation, thereby hiding them from the jury.

Look, a character like Gilberto Rodríguez Orejuela, a former Colombian drug lord and leader of the Cali Cartel, only received a 30-year sentence despite having been guilty of part of the bloodiest drug war between Colombia and the United States in the 20th century. El Chapo Guzmán, the most wanted man after Bin LaDen’s death, received a single life sentence just last year. These are a few popular examples, however, there are many drug traffickers sentencing cases that can be quite questionable.

Since it appears that the precedents for punishment did not apply to Ross’ conviction, what were the prosecutors’ motivations for levying such an excessive sentence?

Well, in June 2011, Democratic Senators Charles Schumer of New York and Joe Manchin of West Virginia wrote to Attorney General Eric Holder and Drug Enforcement Administration head Michele Leonhart in a letter that expressed concerns about the Silk Road. Senator Schumer asked federal authorities to shut down the site and said this about Bitcoin: “It’s an online form of money laundering used to disguise the source of money, and to disguise who’s both selling and buying the drug.”

By September 2013, Preetinder Bharara, US Attorney in the southern district of New York, on the recommendation by Senator Schumer, started leading the prosecution against the notorious Silk Road’s “operator”.

Ross was arrested in October 2013 in San Francisco thanks to a joint investigation by the FBI, and several other US law enforcement agencies. Bharara made sure the case was brought to his territory in New York, rather than California.

After being arrested and denied bail, one of the arresting agents threatened him that he [the agent] would recommend that the judge sentence Ross to life in prison without parole but pleaded guilty of many charges, including murder-for-hire and money laundering. Ross refused to do so.

In February 2014, congressional and financial regulatory hearings floated the idea of new regulations on Bitcoin that would treat it as a more or less traditional currency, subject to the same anti-money-laundering laws as any other form of money.

What bothered the people in New York, in addition to drug commercialization, was the potential use of Bitcoin for money laundering. Even though it is still the case that most money laundering occurs in traditional finance: Mexico’s Sinaloa cartel and Colombia’s Norte del Valle cartel laundered between them $881 million through HSBC. The results? No senior executives were admonished or prosecuted. HSBC of America “only” had to pay a fine of $ 1.9 billion dollars in 2012, representing 5 weeks of earnings, and they were allowed to continue operations, business as usual.

There was a similar and particularly scandalous case with Wachovia Bank (Acquired by Wells Fargo in 2008) back in 2004–2007. Some sources declared that $380 billion were laundered for Drug Cartels. The largest violation of the Bank Secrecy Act, an anti-money-laundering law, in US history. The resolution? a 160 million settlement was achieved and no banker or individual was jailed, punished or brought to account over this grand scandal. 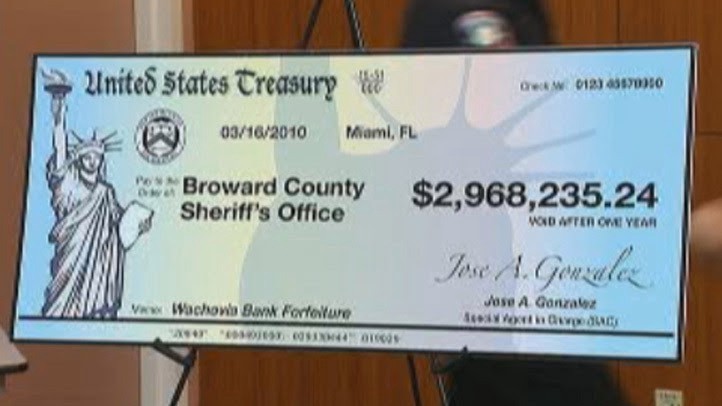 Wachovia checks to South Florida as part of the $160M settlement.

February 4, 2015. “You sought… to put yourself above the law,” the Judge declared. [You asserted that you] were better than the laws of this country. (…) I make this judgement mindful of… the needs for the severest possible penalty to be imposed,” she stated before issuing her sentence to Ross. “There must be no doubt that lawlessness will not be tolerated.”

And we already know how it ended.

Bitcoin is dangerous, but not dangerous in the same way as drug lords, terrorists or other violent offenders. These profiles are part of a convenient narrative used every time the government in turn needs to obtain public or specialized support to justify an extension of capacities or greater collection of resources that just prolongs the cycle of violence. Bitcoin is dangerous since it puts into question something very profound: the symbolic and material monopoly of money as we knew it. An entity that only belonged to the state and that had been hegemonized by the United States for just under a century as no other civilization had done in the history of humanity.

Senator Joe Manchin would comment “This virtual currency is currently unregulated and has allowed users to participate in illicit activity, while also being highly unstable and disruptive to our economy”. I don’t think the senators have thought that Bitcoin, just two years old when they denounced it for the first time, had the potential to overcome or rivalize the US dollar as the world’s reserve currency. But I think they did consider the existence of something like Bitcoin as a kind of heresy. And Silk Road, with the help of Bitcoin and Tor, conceived a different type of market removed from the controls of state taxation and regulation, thus they decided to exercise a symbolic show on Ross.

I mean, the money from the big cartels pay taxes thanks to the big banks, right?

“In such epochs where the highest values of life — our peace, our independence, our basic rights, all that makes our existence more pure, more beautiful, all that justifies it — are sacrificed to the demon inhabiting a dozen of fanatics and ideologues, all the problems of the man who fears for his humanity comes down to the same question: how to remain free?” 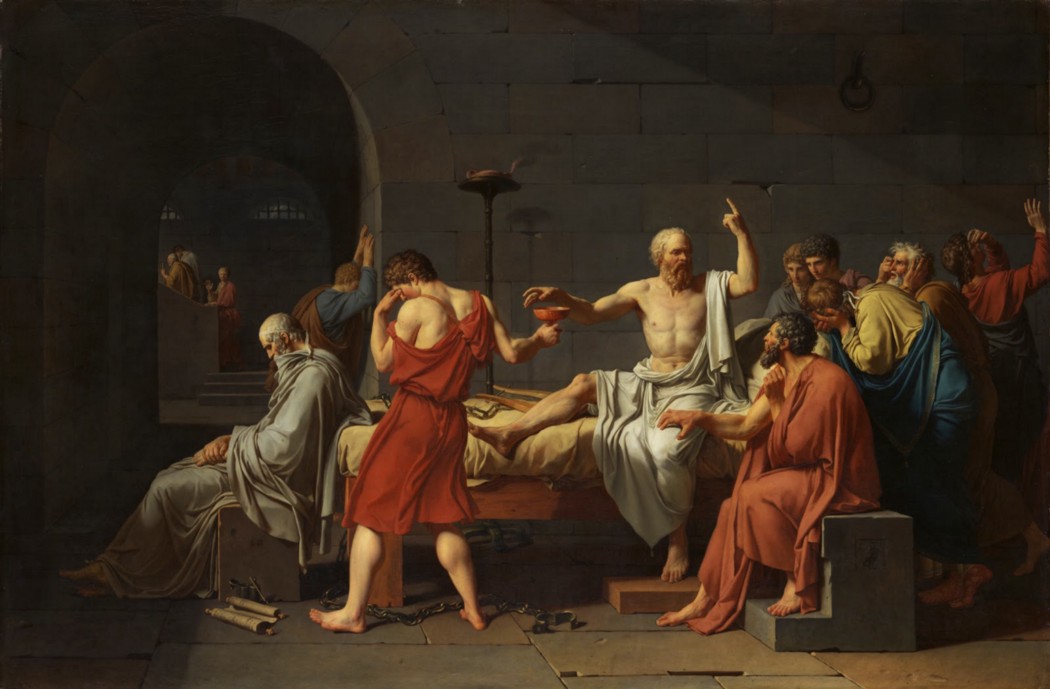 The Death of Socrates

The death of Socrates, caused by an unfair trial, some say, is one of the most important in Western history, only below Jesus. Despite not having formulated very complex ideas as Plato and Aristoteles did, he laid the foundations for a lifestyle that would change the way we see the world, forever.

Fearless of death and his own reputation. Socrates was a man that left no traditional idea unchallenged, asking difficult questions to the point of being quite annoying. And that’s why he got killed, not on any whim, but because he represented a risk, a danger to the power structures in Athenian society.

Nietzsche said that the Greek aristocrats referred to themselves as “We, the truthful.” Which means that they considered themselves as the bearers of the truth, and should not be questioned.

Some say that Bitcoin is apolitical. Maybe we can’t get a Nolan diagram out of our pocket and ask Bitcoin to point out where it feels most comfortable. But what we can understand is that Bitcoin is the Socratic Quest made software.

Provocative ideas become something else when they do not only seek to be annoying or challenging but have an underlying intention of change.

The existence of Bitcoin evokes change? If yes, what kind of change?

Special thanks to Bitdov from Bitcoinherios, Giacomo Zucco, Auriol from Bitcoin Center Korea, Chelsea Palmer & Paul Shapiro for the review and editing of this essay.

Not trusting does not prevent us from resisting tyranny. #FreeRoss.