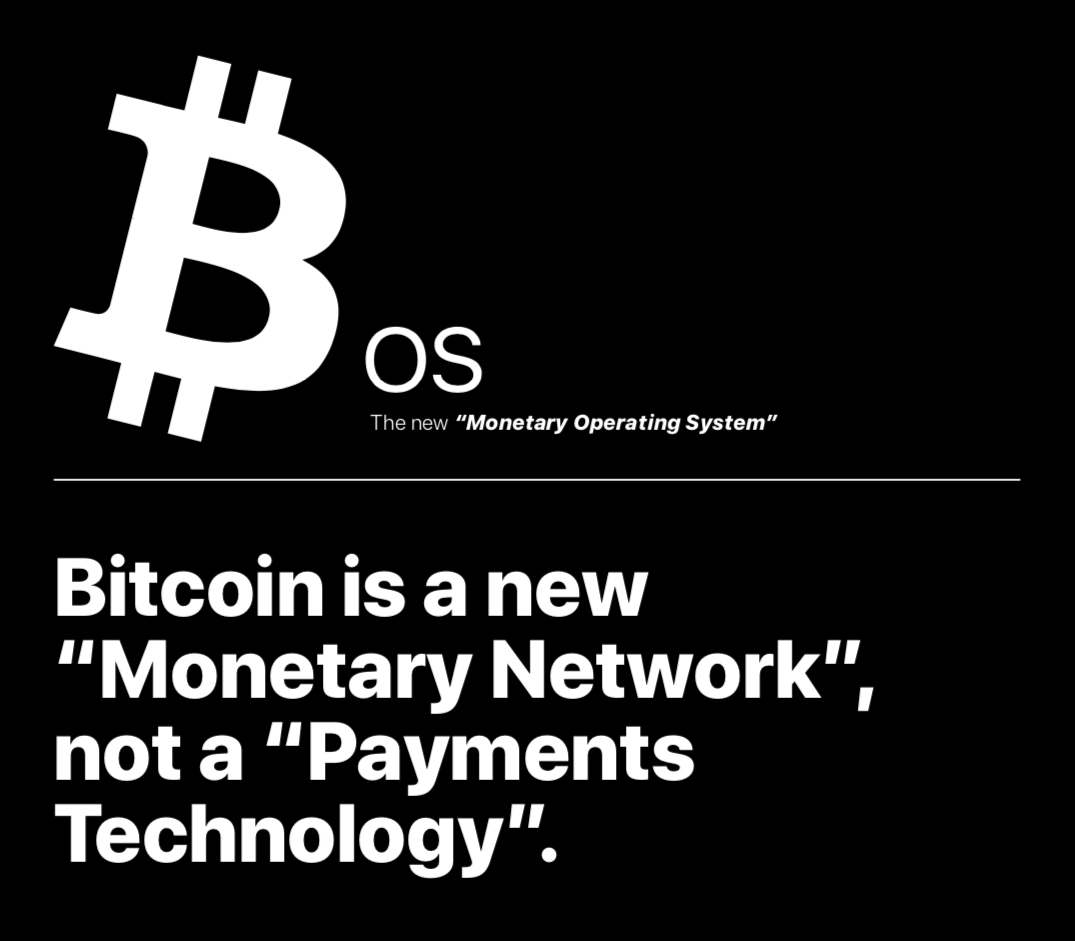 Bitcoin is a new “Monetary Network”, not a “Payments Technology”.

Bitcoin is the first time we’ve combined Money as a unit, with Money as a Network, into one thing.

More on this here:

And because it’s so different, it’s hard to wrap our heads around it.

The problem is further compounded by the fact that nobody really understands money, but most people get payments. Payments are easy: move money, and because it’s been handled digitally for the last 20–30yrs now, it’s even easier to grasp.

But money, that’s a much broader, more foundational concept, and to understand Bitcoin better; we’ll need to understand its real innovation, and in the process separate ‘money’ from ‘payments’.

As we’ve established, Immutability is derivative of cost. It’s this cost of validating transactions and maintaining the network of distributed but consistent ledgers that gives something like Bitcoin its immutability.

Bitcoin’s true innovation was an autonomous network that can establish the authenticity and validity of the state of the broadly distributed ledger.

The ONLY advantage of using this type of costly infrastructure is for actions that require a large degree of trust and assurance, those that should never fail and those that should not be easily reversed. There are a limited set of these, i.e. every transaction / or state change that happens in the world does NOT need this.

Could we make it better by stamping a “net state” to something immutable once a week / once a month?

Yes — definitely. But every transaction? No way. It’s just overkill.

Bitcoin is the most secure / immutable network that exists, NOT because of its “blockchain”, but because of its elaborate and expensive authentication mechanism. Your laptop has the ability to process hundreds of thousands of transactions a minute. That process is trivial. Payments is trivial.

Autonomous, distributed validation is the innovation.

And this is where people go astray.

People don’t ‘get’ bitcoin because they perceive it as some form of payments technology, or some “blockchain” mechanism (which they don’t really understand) for moving funny internet money (which they also don’t understand). That’s not what Bitcoin is.

Bitcoin is a complete reinvention of “money” — the world’s oldest social contract and society’s most foundational layer.

To understand its impact, you need to have a broad understanding of both networks and money. The problem is, most people don’t. In fact, nobody really understands what money is, because it’s not taught anywhere. Few can define it, whether they’re in banking, finance, technology, fintech, capital markets, and especially payments — so they apply their biases to it, and completely miss the point.

It’s like discussing the structure of the egyptian pyramids with your pet goldfish. The goldfish simply lacks the context.

Money requires an understanding of our evolution as a species, anthropology, biology, social engineering, psychology, game theory and what I like to call “the societal stack.” Discussing this is well outside the scope of this section, but I’ll touch on an area which I hope will give you a reference point, the societal stack, in a subsequent section of this edition of The Bitcoin Times.

The complexity of network dynamics doesn’t make the job of understanding Bitcoin any easier. I will touch on this further in a dedicated section — but suffice it to say networks are just as foreign to our intuitive understanding of the world as the pyramids are to the goldfish — the track record of the experts adds weight to this.

Back to payments VS money.

Bitcoin is not a “payments technology”. It’s fundamentally a reinvention if money. Like the motor vehicle was a reinvention of transport — not a better horse and cart. Same as the internet. It reinvented the fabric upon which we communicate. It reinvented the way information is transported. It did not push more, richer or smarter “data” through the phone networks infrastructure.

It used that infrastructure as physical onramps; but the internet is not the cables, or the hardware — it’s so much larger.

That’s why it swallowed them up and is the foundation upon which the majority of today’s society operates. And what’s more, the internet is only picking up speed. Bitcoin is where the internet was in the late 80s. Still largely misunderstood. People are still arguing about speed of payments! They don’t realise that “payments” as we know them today will completely transform.

The same way we’re no longer talking about the quality of the phone call and number of phone calls this “internet thing” will support, we will see new conversations emerge for what can be done on Bitcoin.

The world is changing. The internet was only the beginning….Bitcoin is the next chapter.

Speaking of next chapters, as we near the end of the Medium series for the first edition of The Bitcoin Times, we’re going to begin exploring networks, how the function and dig into where there are some high level conceptual similarities to the internet.