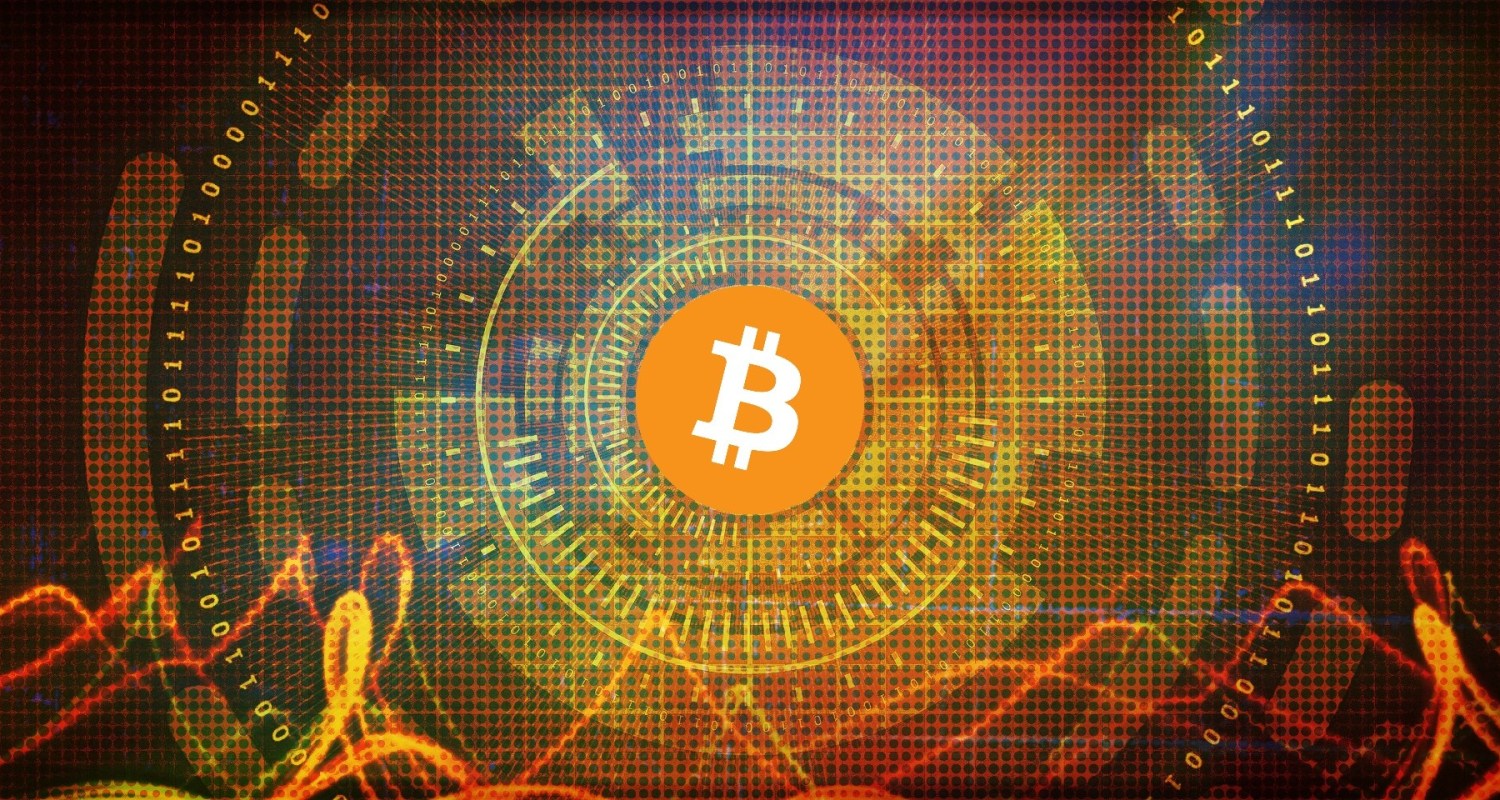 Poorly informed or disingenuous critics often point out to Bitcoin’s “slow” transaction validation time. Yet a truly decentralized and global currency needs to have a rigorous verification process which allows all nodes to validate and broadcast transactions.

The 10-minute block time is not just some cautious threshold that a concerned creator has added to an obsolete technology, in an era when internet speeds were slower. It’s a reasonable amount of time which allows everybody to be in sync with the rest of the network – from the miners who harness solar energy in the middle of the desert to the metropolitan node operators, all participants should have the capacity to download and validate ~1 MB every ~10 minutes.

Regardless of what shitcoin marketers will tell you, Bitcoin’s conservative monetary emission is nothing like the speed limit of a Ford Model T which shakes when driven on bumpy roads. It’s not slow, it’s just secure enough to avoid double spends and guarantee that no hidden inflation occurs.

One of the earliest and most famous cases of Bitcoin criticism belongs to Daniel Larimer. In 2010, he complained about the 10-minute block time and suggested that payment validation should be “as fast as swiping a credit card”.

Satoshi Nakamoto himself went on to argue in favor of a decentralized system in which users validate their own transactions, then dropped his famous “If you don’t believe me or don’t get it, I don’t have time to try to convince you, sorry” quote.

Speaking of transaction validations that happen as quickly as swiping a credit card, the concept of waiting ~10 minutes for the next block appears to be weird for people who come from traditional finance. In their minds, the currency of the internet should transfer instantly and confirm just as fast as their PayPal transfers.

This type of expectation is unrealistic in relation to decentralization. In order for a bank settlement to happen within seconds, there is a lot of institutional trust involved. The banks must trust each other, and the transacting parties are vetted by an intricate institutional setup that prevents double spends.

If Alice sends $1000 to Bob, then the confirmation happens instantly thanks to institutional agreements between their banks. The system relies on trust and is regulated by laws. Once confirmed, money transfer is not permanent and can be reversed or frozen at any time. Also, the actual settlement may take a very long time to happen, as banks keep tabs on each other and only move physical money when they think it’s necessary.

In this thread, cypherpunk Nick Szabo beautifully compares Bitcoin’s security with the trusted and centralized assets.

Bitcoin is completely different in its design and requires specific security to preserve its qualities. First of all, Bitcoin is decentralized. This means that no central party has more authority than the other, and decisions are made with a consensus between nodes.

Secondly, confirmed transactions are final and irreversible. Attacking the network to reverse a transaction after one confirmation took place costs as much as 50 coinbases (312.5 BTC after the 2020 halvening), so the financial incentives are stacked against this type of action (using the same hash power to mine bitcoins generates a greater profit).

Thirdly, bitcoins are scarce and the Bitcoin network secures the emission at all times. If banks can get bailed out if they fail and new money can be printed by central banks to tax the wealthy through inflation, then Bitcoin operates outside of these political decisions. These concepts are hard to grasp by people who have spent most of their professional lives appealing to an authority that has decisive powers to make changes. But in Bitcoin you can’t appeal to a government or bank to revert a payment and you need proper security to make sure that transactions follow the rules.

Yet it seems like not even centralized exchange owners like Binance CEO Changpeng Zhao (CZ), who have been around the Bitcoin space for a while, seem to understand how the network works. So there’s no shame in trying to learn and understand.

If one was to document all the instances when altcoin/shitcoin proponents have pointed out to Bitcoin’s slowness, an entire encyclopaedia of misleading marketing schemes from the “blockchain industry” could could be written.

Yet there are lots of projects whose marketing departments (a concept that’s foreign to Bitcoin and any truly decentralized network) directly attack Bitcoin for being “too slow”. They’ll say that they can handle thousands and millions of transactions per second, they can compete with Visa and Mastercard, and they enable decentralization for mainstream adoption/institutions/a better future/whatever buzzword a marketing department can invent.

But the problem is that their definition of decentralization is very different. To many shitcoins, being decentralized only means lacking a central point of failure. Having a handful of nodes being operated by different actors is sometimes enough of a reason to engage in misleading comparisons with Bitcoin.

They don’t care as much about every user being sovereign and running a node to validate all transactions. They don’t educate users to download the reference client to verify the coins they’re receiving and increase their own privacy. It’s also likely that they will find excuses about full nodes being wasteful, expensive to operate, and unnecessary in their “revolutionary” and “decentralized” network. 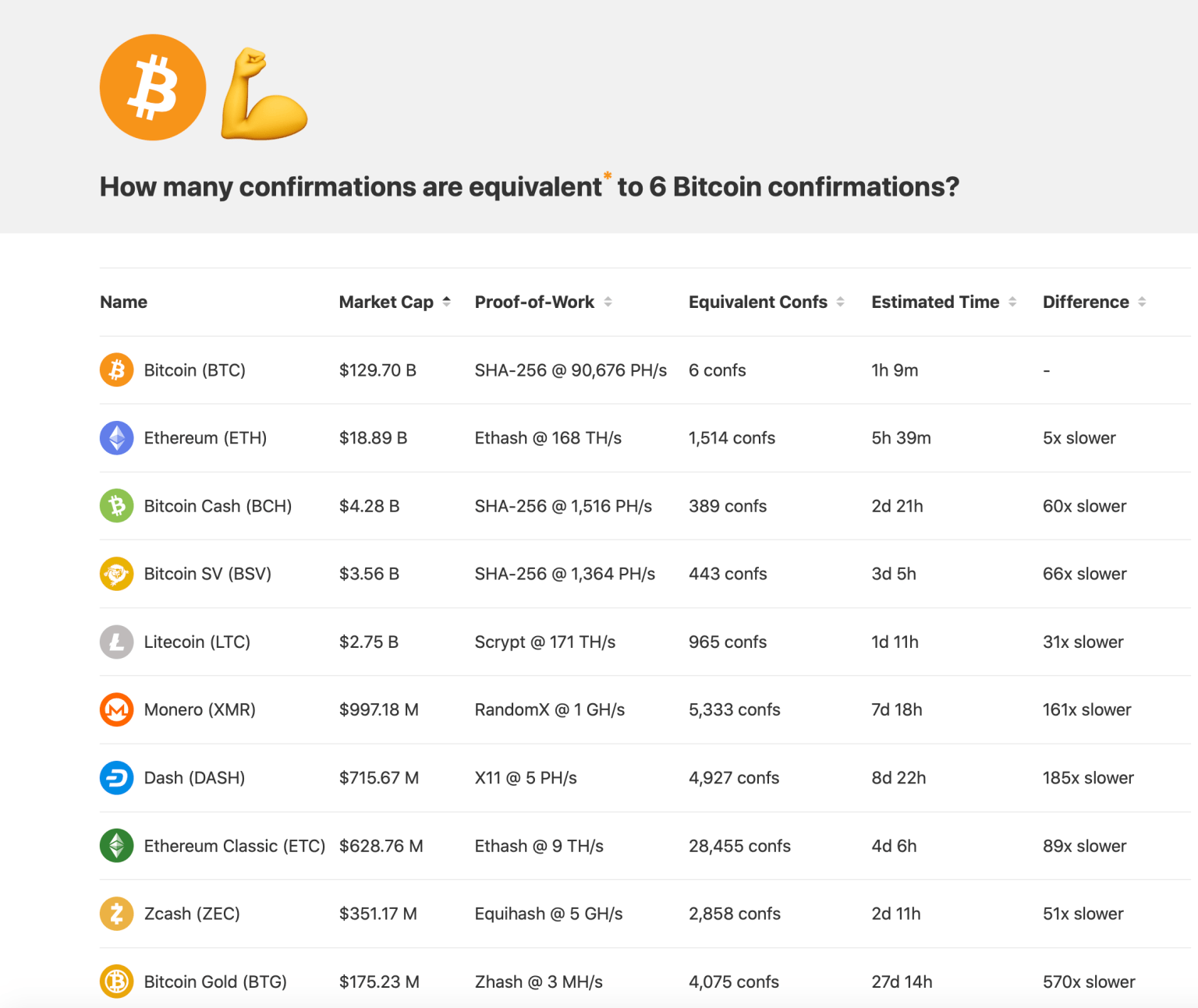 One useful resource that will help you understand network security and transaction finality is HowManyConfs.

Most of the times, these shitcoins target audiences that feel disillusioned by the legacy banking system. So they will highlight their quickness by comparing themselves to Visa, Western Union, or PayPal, and then drop the “decentralized” argument. If they also include hype words such as smart contracts, DeFi (decentralized finance), AI, machine learning, and other terms that are popular in Silicon Valley, they might just attract the investments of clueless newcomers.

But how decentralized and secure is a network that is worth a few billions, but can be attacked for less than $10.000/hour? And what difference does it make if your shitcoin of choice receives a confirmation in 15 seconds, if it takes 5 extra hours to be sure that it’s as final as a Bitcoin transaction?

Also note that the case described is that of Ethereum, which has a reasonable amount of hash power to secure it – in the case of DASH you’d have to wait 8 days. If these network don’t improve their security with proper incentives, it’s likely that the gap will widen in the future.

Right now, the “slow” Bitcoin network is a lot faster if we consider security (which is the best metric for decentralized networks). And the 10 minute block time is just perfect to not discriminate between metropolitan broadband internet users and isolated individuals who use mesh antennae and have very slow connections. Everyone gets to be in sync with the network, everyone is encouraged to run a full node and can do it for less than $200, and every transaction that gets included in a new block is properly verified against double spends and inflation.

This “Model T” of cryptocurrencies actually turns out to be better according to the metrics that actually matter in decentralized networks. And for the scope of this analysis, only base layer transactions and security have been taken into consideration. The Lightning Network, Liquid, and other off-chain scaling solutions offer more privacy, speed, and scalability without minting new shitcoins.

So the next time somebody says that “shitcoin X” is faster than Bitcoin or claims that Bitcoin is slow, show them the criteria that truly count in a decentralized network. And when they claim to have invented the next Bitcoin, they better bring the network effect and security – or else it’s just a good idea that can be very well incorporated into the Bitcoin ecosystem as a sidechain. 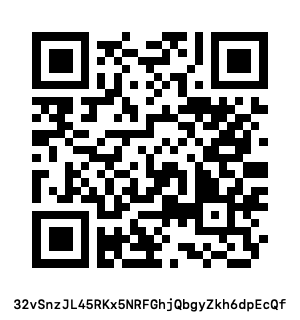 If you found this article useful, please consider making a donation to this address. 32vSnzJL45RKx5NRFGhjQbgyZkh6dpEcQf