We can classify the investment theses for (and against) investing in Bitcoin into categories. This helps clarify how much of an impact a given narrative could have to Bitcoin’s valuation. Investment theses that have a short holding period are less meaningful for investors than ones with a long holding period. Likewise, theses with a large number of potential adopters are more meaningful for investors than ones with a small number of potential adopters. This is an imperfect heuristic that should be debated and refined. 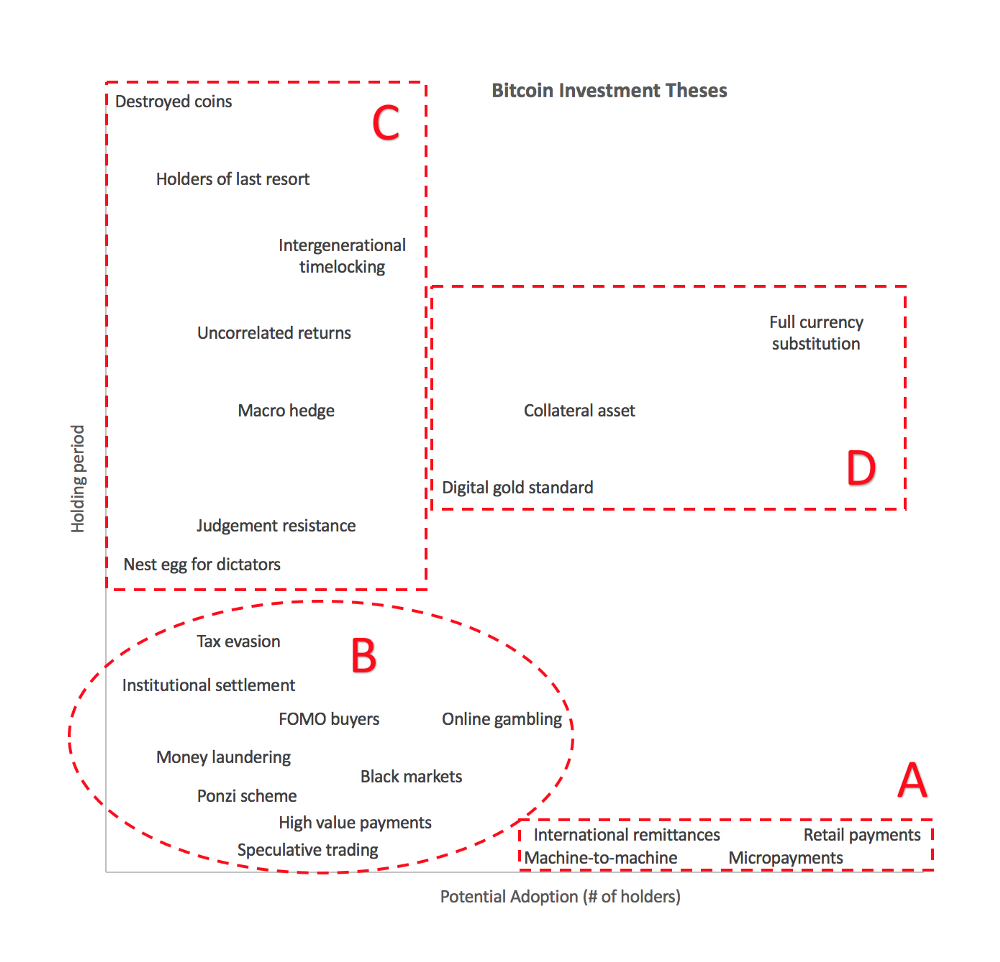 Investment theses with a short holding period are focused on using bitcoins as a method of payment. Some of these theses would find ubiquitous usage while others are niche verticals. If you disagree with anything written here, feel free to contact me on Twitter or on GitHub.

Thesis: Bitcoin, whether it’s on-chain, off-chain, or Lightning, will supplant current retail payment methods including cash, checks, and credit cards. Bitcoin’s advantage over cash and checks is that it is digital, the consumer only needs a smartphone and the retailer does not have to worry about handling cash or depositing checks. Bitcoin’s advantage over credit cards is lower transaction fees, irreversibility which protects the merchant, and a “push” system with no credit card numbers — which protects the consumer. Fast settlement means that merchants require less in working capital.

Anti-thesis: Reversibility increases consumer confidence. A “pull” system enables subscriptions which are an important business model. On-chain transactions can not scale without centralizing the Bitcoin network. Off-chain and layer 2 transactions have an up-hill battle against entrenched debit and credit card payment systems. Credit cards give consumers flexibility in financing their purchases. Many countries have already deployed payment systems that are instant with low to zero fees. Consumers who acquire bitcoins with the intent of making retail payments end up just holding the bitcoins for price appreciation instead.

Anti-thesis: Subscriptions provide a better revenue model for content publishers and social media tipping ignores why people actually engage with each other. Game creators and players currently have no serious issues with in-game purchases. If there are any complaints, it’s from players who feel nickel-and-dimed, which would only be worse with micropayments.

Thesis: The Internet of Things (IoT) means your refrigerator could communicate with several grocery business APIs to negotiate for the best value replenishment. Soon the grocery business itself will automatically be negotiating with self-driving cars providing delivery services. This network of machine-to-machine payments will all be with Bitcoin’s Lightning Network.

Anti-thesis: It’s unclear why the businesses, which own the machines, would not invoice each other on a monthly basis, instead of continuously streaming payments. Companies will continue to keep track of their payables and receivables, and netting them out for payment, in which case Bitcoin is not a necessity. Today Amazon Web Services charges by the second and can be controlled by an API, but payments are made monthly with fiat-denominated credit cards, wire transfers, or ACH.

Thesis: Money transfers between countries are expensive and slow; Bitcoin can make them fast and cheap. Anyone, anywhere in the world who has an internet connection can receive bitcoins.

Anti-thesis: Senders want to send their local fiat currency and recipients want to receive their local fiat currency. Neither side has bitcoins. Using Bitcoin means adding an FX conversion on the sender’s side and on the recipient’s side. This inherently increases cost. The cost of sending $200 anywhere in the world has declined from 10% in 2008 to 7% in 2017. Money transfers are expensive due to physical locations, marketing, licensing, and compliance. Bitcoin on its own does not solve any of those issues. The slow fiat payment rails are being improved by fintech startups using fiat banks and SQL databases.

Thesis: Just as restaurant waiters can under-report their cash tips, a person or business receiving bitcoin revenues could under-report them. There is no financial institution which the IRS can subpoena for records. If the tax evader is careful about how they use Bitcoin’s public blockchain ledger then they can also avoid being caught with data analysis.

Anti-thesis: Tax auditors have experts in computer forensics and there’s always a paper trail for the creation and sale of a good or service. It would be risky and time consuming to convert the proceeds into fiat. Tax evasion does not scale due to whistle-blowers, reporting by third parties (1099’s in the US), and the lifestyle/income mismatch.

Anti-thesis: Ultimately most goods and services have to be delivered in the real world, so even if the payment is pseudonymous the delivery can reveal the identities of buyers and sellers. Additionally, even if the bitcoins are bought and sold in person for fiat cash, there is a risk that the bitcoin broker is an informant or government agent. Buying and selling bitcoins on an online exchange with KYC/AML is even riskier. This problem is compounded by the visibility of on-chain Bitcoin transactions.

Thesis: Ransomware is when malicious software encrypts a user’s data, locking them out of personal or business information. The virus demands payment in bitcoins to decrypt the data.

Anti-thesis: Increasing awareness of the problem is leading to effective mitigation strategies, whether with anti-virus software or offline data backups.

Thesis: While online poker is legal in the United States, in practice the Unlawful Internet Gambling Enforcement Act of 2006 made it illegal for financial institutions to service online poker platforms and players. This eventually led to the wide usage of Bitcoin for funding online poker games. The phenomenon has expanded beyond poker. There are Bitcoin-funded sites for sports betting, blackjack, dice, and slots.

Anti-thesis: If US legislation changes to be more favorable towards online gambling then this niche for Bitcoin could disappear.

Thesis: Payment processors and banks are facing pressure to not service businesses for political reasons. These businesses include gun stores, marijuana dispensaries, and sex workers. Other businesses and individuals do not have access to banking services due to redlining or credit history. A Bitcoin wallet enables these demographics to “be their own bank” with a checking account and the ability to send and receive payments.

Anti-thesis: As long as the rest of the economy is using fiat currencies, the unbanked still need a way to exchange their bitcoins for fiat. They can use in-person cash exchange services, though there are cases of people being robbed and it is not a scalable solution for anything but the smallest business.

Thesis: Bitcoin exchanges are open for trading 24/7. On top of Bitcoin’s volatility, they also offer up to 100x leverage. Tech-savvy traders are building bots that use the exchanges’ public APIs to execute their strategies. The matching engines of exchanges are moving from AWS to dedicated hosting, in the same facilities where US equities trade. Exchanges are the most profitable businesses in the Bitcoin ecosystem, offering both spot and futures products. Speculators can now profit by going long or going short. The limited supply of bitcoins has led to repeated speculative frenzies, where fortunes have been made and lost.

Anti-thesis: Speculation is zero-sum, eventually bad traders will run out of capital and good traders will see diminishing profits and move to greener pastures. Bitcoin’s volatility has been decreasing as its liquidity increases. The markets are manipulated to favor whales and they will be shutdown or become boring when government regulators intervene to stop manipulation. The speculative frenzies are faked by wash-trading volume and fractional reserve exchanges.

Thesis: While Bitcoin may not fit the definition of an actual Ponzi scheme, it has a lot of similarities. Preston Byrne popularized the concept of a Nakamoto Scheme. Early buyers of bitcoins recruit and sell to later buyers, at ever higher prices. The cries to “HODL” are there to prop up the price and keep the scheme from falling apart. “Tulips” and “greater fool theory” are used as shorthand for this thesis. Once the number of gullible buyers runs out, the price will crash as everyone tries to get out at the same time, much like a bank run.

Anti-thesis: Every money has no intrinsic value. They are bubbles, shared illusions, inter-subjective Schelling points. A money is an unproductive asset which is best suited to be society’s medium of exchange, store of value, and unit of account. Bitcoin is bootstrapping to potentially fill that role from a value of zero. This has led to an astounding run-up in its fiat price. What goes unexplained in the Ponzi scheme thesis is why severe drawdowns (most recently a 91% peak to trough drawdown in 2014) are not a deathblow. So far, the value of Bitcoin has recovered and ultimately has increased beyond the previous all time high.

Thesis: Corrupt politicians who were bribed with bitcoins want to convert them into legitimate assets without raising suspicions. The money launderer can take advantage of Bitcoin’s fragmented market by sending small amounts to many different exchanges to sell for fiat, a form of structuring. A money launderer can also mix the illegal Bitcoin revenues with legal Bitcoin revenues, for example from an online poker business they control or partner with. A growing strategy is purchasing property with bitcoins, and then selling the property for fiat.

Anti-thesis: Any involvement of Bitcoin raises suspicion, so laundering bitcoins is ultimately harder than laundering fiat. Data indicates that Bitcoin money laundering has been an increasingly marginal activity. Bitcoin faces stiff competition from large international banks, which continue to be the go-to providers of money laundering services.

Thesis: Countries which have a currency peg, like China, have to rely on capital controls to prevent their currency’s exchange rate from appreciating or depreciating in an unexpected manner. For example, Chinese citizens can only purchase up to $50,000 of foreign currency per year. Chinese regulators have also recently prevented offshore investments into U.S. real estate. Bitcoin allows people to route around capital controls, by buying bitcoins locally, sending them to an exchange abroad, and selling them for the foreign currency.

Anti-thesis: While Bitcoin can help small-scale evasion of capital controls, it is not liquid enough to capture market share from other forms of evasion. Governments have and will crackdown on their local Bitcoin exchanges to further reduce liquidity.

Thesis: Retail investors see the price going up and experience a “fear of missing out” on further price gains and the social phenomenon. Individuals want to be able to relate to each other, i.e. if your friends are talking about investing in Bitcoin then you feel a need to do so yourself. When the price stops going up parabolically the social fad quickly passes. Conversation turns to embarrassing losses and moves on to the next trendy investment.

Anti-thesis: The FOMO buyers become FOCO (fear of cashing out) holders. They sit on the bitcoins they impulsively bought, waiting for the next bubble. A small percentage start to research what Bitcoin is and continue accumulating during the bear market.

Thesis: In 1979 Paul Krugman published a paper titled “Vehicle Currencies and the Structure of International Exchange”. In this paper he explained that “People who want to exchange one currency for another will not necessarily make the exchange directly. They may make the exchange by way of some third currency, which becomes a “vehicle” for the transaction. Historically, certain currencies — the pound sterling before 1914, the U.S. dollar in recent years — have come to be widely used as vehicle currencies.” Bitcoin has the potential to become the vehicle currency of international trade.

Anti-thesis: Bitcoin is not nearly liquid enough to be a vehicle currency. Competing with the U.S. dollar for this is extremely difficult, the most likely candidate has been the euro and it has made little progress.

Thesis: Governments and individuals that are struggling to get hard currency can use cheap local electricity to mine for bitcoins. The Venezuelan government has been seizing imported Bitcoin mining equipment so that they can use it themselves. The North Korean government acquired 11,000 bitcoins through a combination of mining and hacking.

Anti-thesis: As Bitcoin mining finds increasingly inexpensive sources of electricity, it will become less and less profitable for governments to mine even if they have favorable access to fossil fuels.