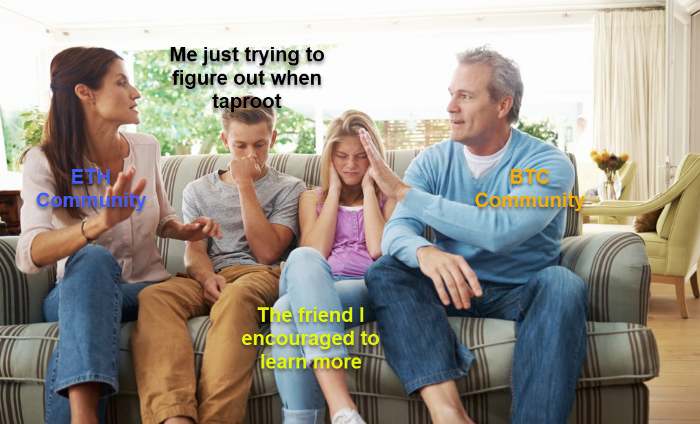 It was a little over a year ago that I first heard the phrase “Toxic Bitcoiner.” I was attending my first BitBlockBoom conference near Dallas. The event itself is Crypto Twitter incarnate, and the sweltering heat did nothing to curb my excitement as I found myself rubbing elbows with the who’s who of the Bitcoin world.

On the first day, I found myself in an Uber with Matt Odell, Marty Bent, and the Bitcoin Sign Guy as we rolled to a BBQ and bar filled with meat, drinks, and Bitcoin fun. Each day of the event was awesome. I found out that Bitcoin Tina looked nothing like I expected her to. I watched Jimmy Song get bullied (in good fun) into auctioning off his iconic hat. I chatted with Saifedean over a drink, learned about ATMs from LibertyX, found out that the cold wallet that I was using wasn’t cold enough, and had amazing “one more drink?”s in the hotel lobby as Gary Leland, the consummate host, greeted and chatted with the guests. The people were interesting, intelligent, and happy to help learners like me. The sense of community was real, though perhaps that was the beers talkin’.

On the second day of the event, Michael Goldstein set Crypto Twitter on fire as he lectured the room on tactics to “bully the people who don’t agree with us” and reclaim the term “toxic,” much in the same way we reframed the term “Bitcoin maximalist” and turned it from a pejorative into a badge of honor. He concluded that “if someone is unwilling to take on your untolerated, toxic opinion… They have simply not deserved yet to have actual discussion.” Before he even finished his slides, word of the talk made it’s way to Crypto Twitter, sending it into a tizzy.

The truth is the talk was mostly tongue-in-cheek and well crafted for its audience. Funny and intelligent, it was perfect. Watch for yourself here.

That said, it always struck me as a bit on the nose, a “funny ’cause it’s true” sort of thing. Like many others who are hungry to learn about Bitcoin, I found my way to Twitter. While popular, Twitter is a horrible medium for nuanced discourse, a topic I’ve already discussed. But structure aside, like BitBlockBloom, Twitter is where you find the thought leaders of the community. And unfortunately, it’s all too often where you find the thought leaders acting like assholes.

In the past month alone: 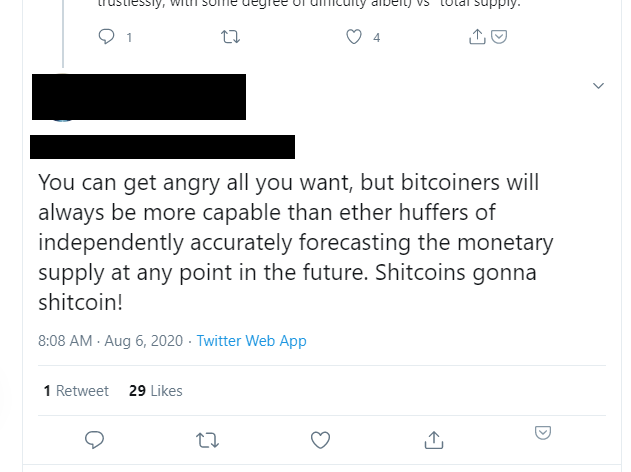 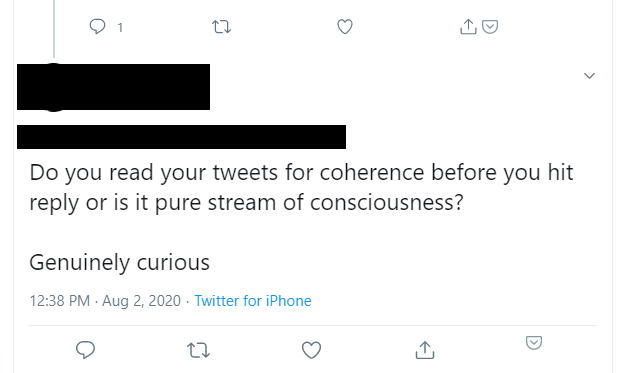 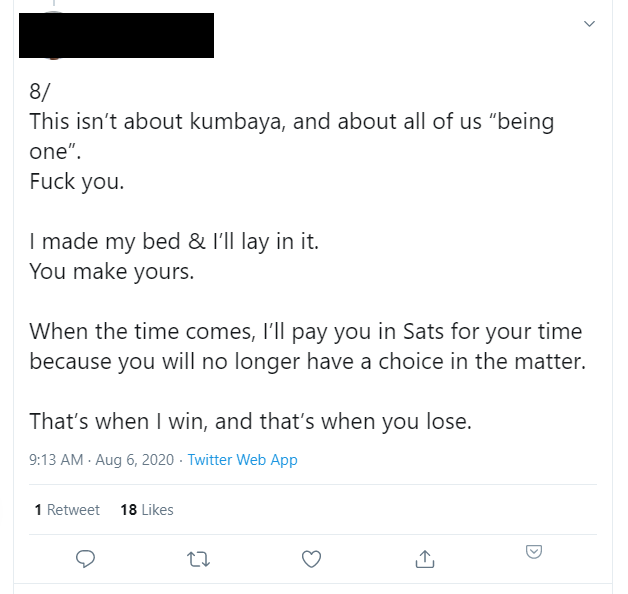 (i’ve blacked out the authors because im not trying to call our a person but instead point out a pattern.)

The whole thing feels like that dude you need to defend as “actually a really good, smart guy… I promise!” after he offends your wife for the third time. That’s a shame, because in some ways, it’s true. These guys really are good and smart. I follow the same people who tweeted the above, I would recommend others follow them, and I continue to look to them for informative content.

Unfortunately, there is another set of people, like my mom, my coworker, and my neighbor, who aren’t even sure why they are on Twitter… but they want to know more about Bitcoin and what it’s all about. These lay people might read the above and think, “Fuck this shit, I’m out.” The Bitcoin community needs to show this audience greater consideration..

It’s not just about making our moms feel good when they hop on Crypto Twitter for the first time. The community has a huge stake in these moms understanding and getting on board with the movement, and if they do, that has very real implications for Bitcoin’s place in the world… or more selfishly, its price. At some point, someone in Crypto Twitter needs to ask, “Who are we talking to?” If it’s just ourselves, an echo chamber, then what’s the point? And if the audience is broader than that, maybe the tone of our tweets should be crafted for that audience. Maybe memetic warfare isn’t the best way to help Bitcoin expand in all the ways and to all the places we believe are possible.

Roughly a year after that talk, I tweeted this: 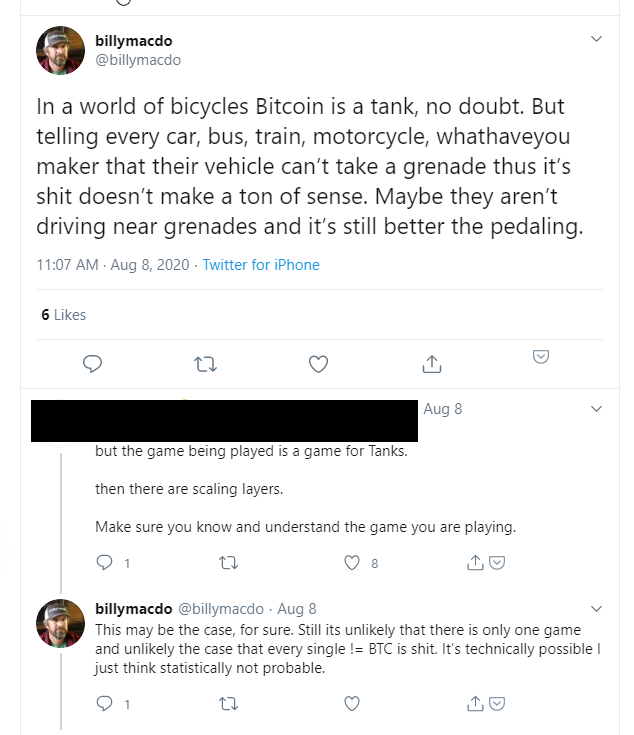 I don’t find it controversial, and the logic should make sense even to the everyman who knows nothing about Bitcoin. I have far fewer followers than the heavy hitters of Crypto Twitter, so I didn’t expect much in the way of engagement. But I definitely didn’t expect to get blocked by anyone.

That conversation resulted in my being blocked by the person who replied, someone I otherwise find to be a thoughtful and measured contributor to the community. And this is where we are at. I didn’t think much of it. But a “normie” making that same statement and then being blocked over it would and should leave the interaction with a bad taste in their mouth.

Alternatively, that same statement can lead to more level-headed results. In a different reply thread to the same tweet, I had this exchange with another community member. I’m not sure we agreed, which is great, but we interacted and could do so again in the future. 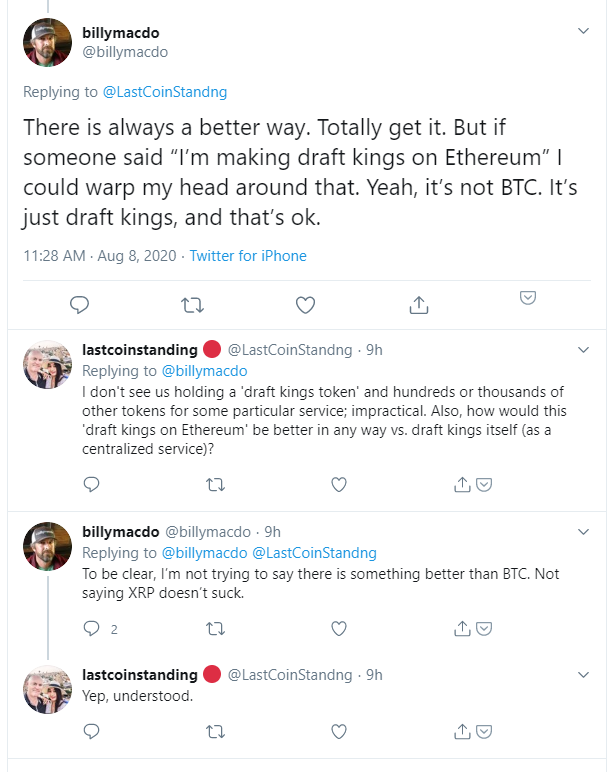 As BitBlockBoom 2020 rapidly approaches (an event I sadly can’t join this year and will suffer from FOMO the entire weekend it takes place), Bitcoin’s narrative is stronger than ever. Perhaps it is time to reassess our approach to how we talk about that narrative. Maybe this warfare, which ultimately adds up to insiders fighting with insiders, needs a hard fork.

That isn’t to say all projects are created equal or that real problems don’t exist in protocols. When problems exist, we should discuss them. However, Twitter isn’t a bar full of insiders drinking and ribbing each other at a conference. It’s public. We should consider not only who we want to engage but who the real audience is and how they will perceive the infighting. As always, and especially on a platform with as large of an audience as Twitter’s, getting more people to understand and use Bitcoin should be the community’s goal. Encouraging 5 people to get into Bitcoin is more important than saving one person from buying [enter shitcoin here] and our messaging needs to align with that idea. 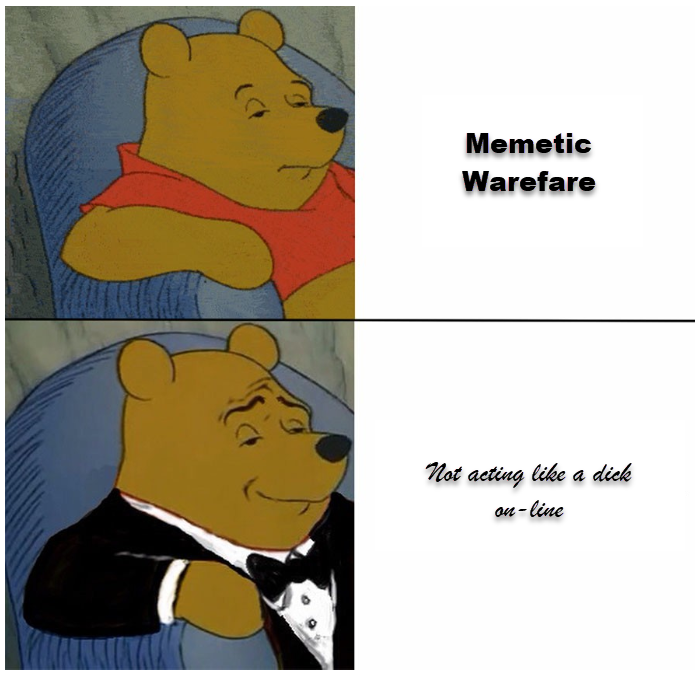