When did Bitcoin’s investment era begin? A study using NVT

For those familiar with NVT Ratio, the data from the early years comes off very skewed, sometimes written off as noisy rubbish data. 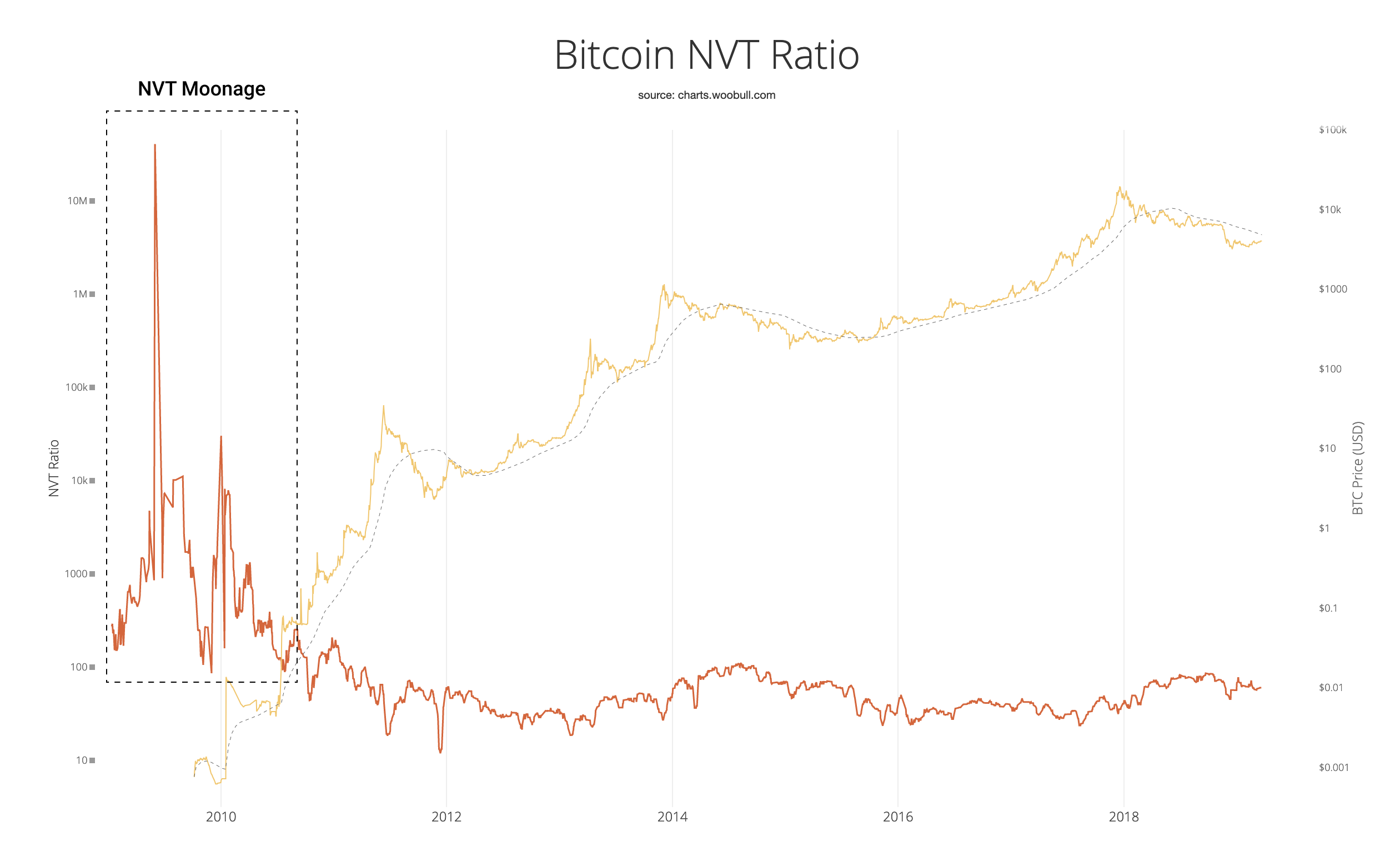 To answer the mystery of early NVT moonage, come with me on a trip down memory lane and visit the transactional data of Bitcoin’s early years.

All transactions on the network consists of  shards of BTC value (called UXTOs) moving between wallets. This is what a typical transaction might look like…

In this example, a 0.75BTC shard was sent to a recipient, and importantly there was a new 0.25BTC shard returning to the sender as the change from the transaction. In this common example the transaction had two output shards.

When sending to others we usually see 2 or more outputs due to the change output returning. (Sometimes there are a multitude of outputs, especially if payments are made to many recipients in the same transaction, Bitcoin exchanges like to do this for efficiency.)

Another common thing we do is cleaning out a wallet, sending all coins to a new wallet. This is a common example of a single output transaction.

This transaction has no inputs, and one output. This happens when a new coin is mined into existence, we call this a coinbase transaction .

Great, after that primer we we can revisit Bitcoin, the early years…

In the early era, the network was dominated by mining. Coins were either mined straight into wallets and held, or moved from one wallet to another. We can see this because the average outputs hovered around 1. 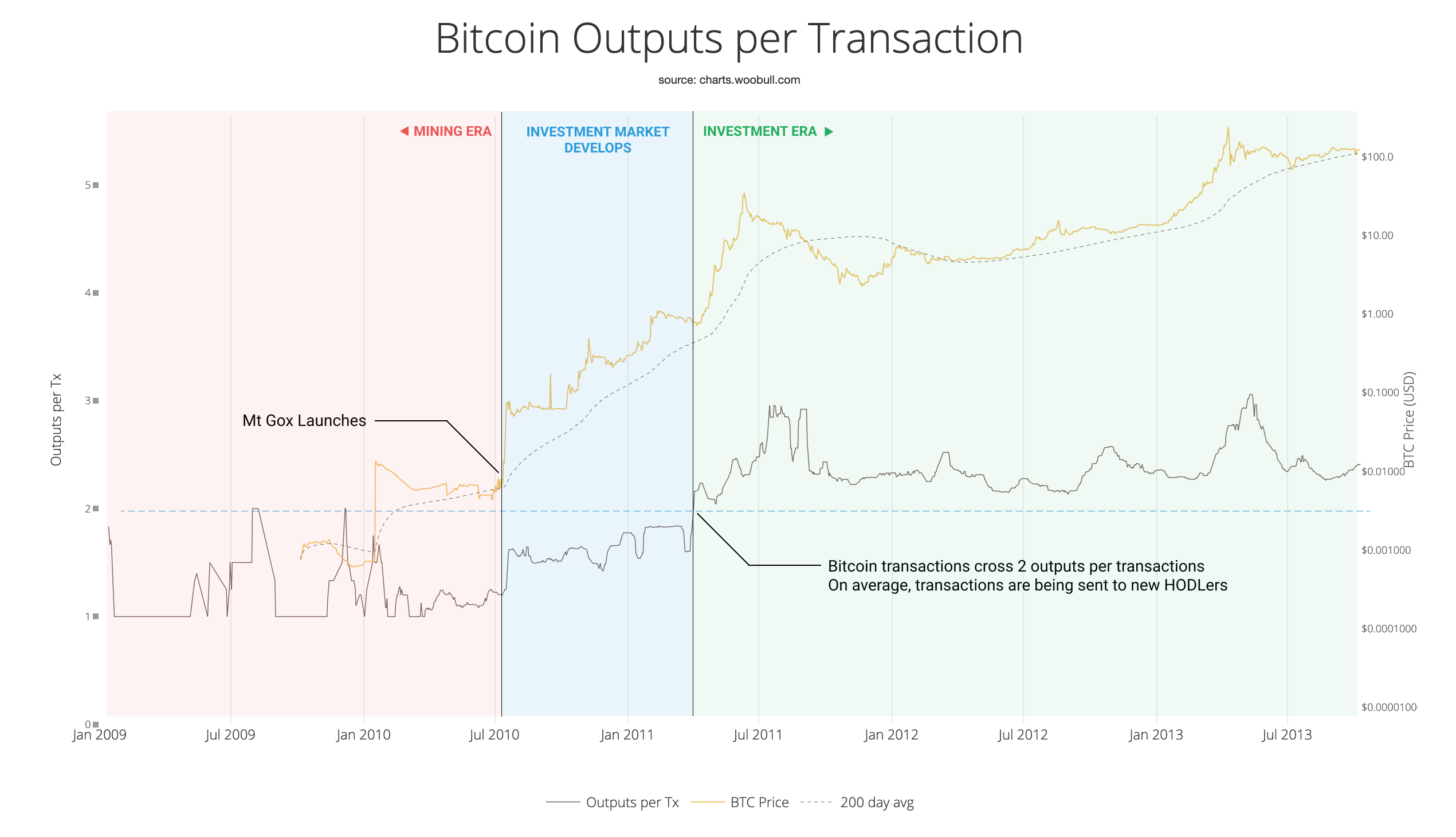 On 5th October 2009, a website called New Liberty Standard started pricing bitcoins using the price of electricity it took to mine them. This was the first time Bitcoin had a daily price.

By 16th January 2010, New Liberty Standard started pricing according to buy and sell demand, and the price jumped 19x from 0.07 cents to 1.3 cents.

On 25th May 2010, a second market opened called Bitcoin Market. It also traded according to buy and sell demand. (Its first day of trade had a close price of 0.3 cents with a volume of 1000 BTC, that’s $3 of trade volume.)

The third exchange to open was the infamous MtGox, launching one month later in July 2010. It’s here we see the price leap again, and the average outputs per transactions start to climb towards 2, this is where the early investment market starts to develop. Average outputs climbing to 2 was the telltale sign that transactions between investors were outnumbering those from mining.

Breaking down the early market under the lens of NVT

Now we can move onto the NVT domain and look at the actions the market took in its early history. Here’s the NVT Ratio chart using the latest volume estimates from Coin Metrics Pro. 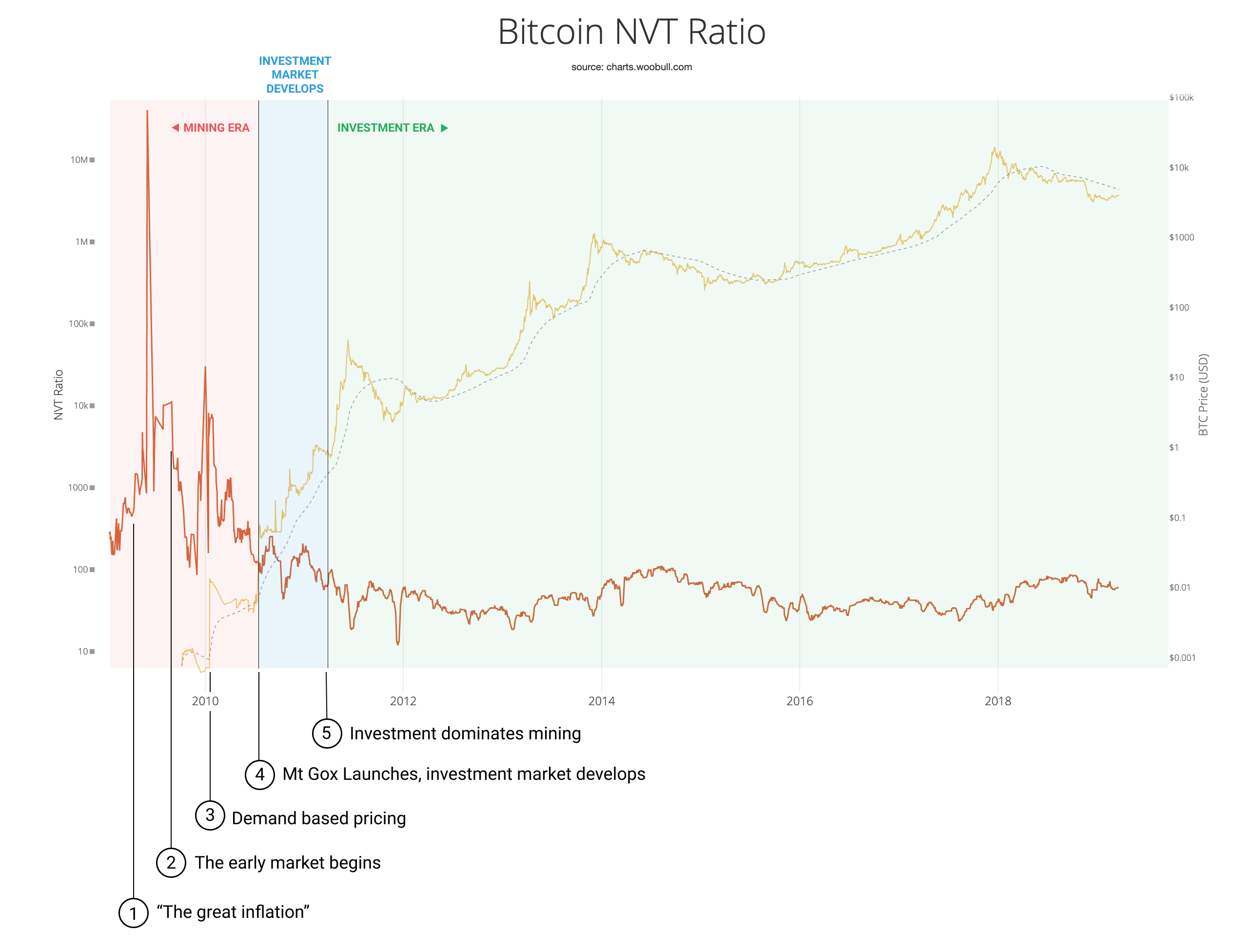