Michael Suede is an Austrian economist and author who holds a business degree from the University of Wisconsin. Michael is a veteran of the US Navy and an advocate of voluntarism.

The Economics Of Bitcoin – Resource Allocation And Interest Rate Distortion

This article is in response to claims by inflationistas that Bitcoin isn’t a viable currency because the supply of coins does not inflate to counter-act deflation.

Their arguments against my previous article on this subject are as follows:

The first question I have for the inflationistas is, who is to decide who gets the new funny money if Bitcoin was to be arbitrarily inflated?

Say we are to have an inflationary Bitcoin currency that is arbitrarily printed up at a rate that exactly matches price deflation (which is an impossibility, but lets say its possible to code such a mechanism).

Should the miners get it?

If the system was changed to grant miners additional coins based on CPI price levels, does that not artificially give miners control over more resources than they otherwise would have?  Money controls resources.

Those who get the new money first get the most benefit.  This is because they get it before it has circulated in the economy and driven up prices.  This is why countries who engage in money printing have highly stratified wealth distribution.  Typically bankers and bureaucrats benefit from printed money the most under fiat fractional reserve systems because they are at the top of the money spigot.  Under our current system, those who use debt leverage the most ultimately derive the most benefits.

Again, it is not “a wash” when comparing the benefits and detriments to savers and debtors.  It is not a wash because funny money distorts the structure of production.  This should be plainly evident from the preceding paragraph.  Funny money distorts interest rates, which alters not only who controls resources within an economy but also what an economy produces.  Here is an entire lecture by Prof. Roger Garrison that explains exactly how printing money causes detrimental distortions in the structure of production.

When interest rates are artificially low, long term interest rate sensitive projects that normally would NOT be undertaken due to interest rate costs suddenly look like viable projects.  This is how bubbles get formed.  When rates are low, housing looks like a great deal.  Everyone can suddenly afford half million dollar homes because they figure they can make the payments on 4% mortgage.  If rates were at their market set levels, those same people would not be looking to purchase a new home because they know they would never be able to make the payments at a 15% rate.

So the economy moves to produce many new homes when rates are artificially low, but since the productive capacity of the economy is finite, some other area of the economy must suffer in order to meet the demand for new home construction.  The economy can not make the same level of consumer goods if housing production expands.  People and resources must be diverted from consumer goods production into housing production in order to meet the demands of new home construction that is inspired by the artificially low interest rates.

This bubble will last until the market realizes that there are so many new homes on the market that the people who speculatively bought in the hopes of making money on asset appreciation can’t unload their homes at prices higher than they bought them for.  At this point home prices plunge as the speculators move out of the market and dump all the houses they have been holding.  Eventually a point will be reached where people are so in debt that they can’t afford to take out more debt even if the banks have an unlimited funny money reserve pool to lend from.

Additionally, we must consider where the consumer goods end up coming from if the economy decides to focus on housing production to the detriment of consumer goods production.  Here’s a very brief article that covers what happens to the flow of investment dollars as low interest rates divert resources within the economy.  Economist Robert Murphy writes:

So if the Fed fuels an artificial boom, such that assets prices in the US are rising, then foreigners want to get a piece of the action. On net they want to buy more US assets, than Americans want to buy of foreign assets. The only way that is possible is if the US runs a current account deficit. Intuitively, as US stocks, real estate, etc. are booming in market value, Americans are willing to sell off more of them (in absolute dollars) and use the proceeds to import more TVs, cars, and other goodies from foreigners as payment.

But setting that aside, let me get back to the problem of finite productive capacity.  Printing new money never creates more goods and services within an economy.  PRINTING MONEY ONLY CHANGES WHO CONTROLS RESOURCES AND WHAT AN ECONOMY DECIDES TO PRODUCE WITH THOSE RESOURCES.  If the government prints up a trillion dollars to buy 10 new aircraft carriers, it is the same as if the government robbed the private sector of all the steel and manpower that those carriers require.  If those productive resources are diverted into carrier production because the government printed money, that means they are not available for the private sector to utilize in car or computer production (or any other productive enterprise that meets consumer demand.)

A quick demonstration of why printing money does not create more wealth.

Say we have an economy that normally produces goods and services in the following ratios: 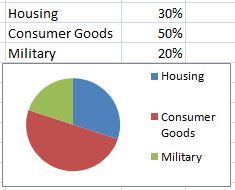 Will printing money change the size of the pie or will it simply change the ratios?  What the Keynesian nut jobs argue is that printing money actually causes the pie to expand because the new money will somehow put more resources to work.

What actually happens is quite different.  It should be obvious to anyone with a brain that printing money will not make a country richer (more abundant goods and services.)  It can only change who controls already existing goods and services.

I already covered why printing money distorts interest rates, which in turn, effects the structure of production.  So what you end up with is something that looks like this: 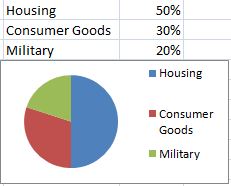 In the process of altering the structure of production through the lowering of interest rates, unemployment will INCREASE from this.  As we can see, as housing expands, consumer goods manufacturing decreases.  The people who previously worked in consumer goods are diverted into housing production, and in the interim, will be unemployed.  Also, since a bubble in housing has been created, when it finally bursts it will create massive unemployment.  This is because while the diversion into housing production was a slow process, the unwinding of the bubble is a fast process, which creates a tidal wave of unemployment once it finally bursts.

This is why in a comparison of unemployment rates, it appears as if unemployment is lower during the run up to a bubble bursting.  The truth is unemployment is exacerbated at both ends, marginally while going up and tremendously when coming down.

If we add more workers and discover more physical resources, like mines, oil wells, fusion power, etc.. we can have an expansion of the pie that looks like this: 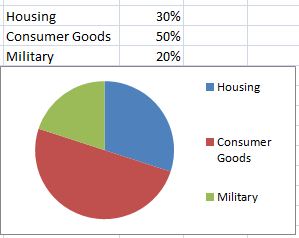 The increase of real wealth within a society can only occur by an expansion of the pie.  Printing money does not expand the pie, it can only shift around what is produced within the pie.

I could go on and on with examples of why printing money never produces more economic prosperity.  It necessarily can not do that because money isn’t something that can magically create resources where none existed before.  It is simply a resource allocation mechanism.

The Economics Of Bitcoin – Doug Casey Gets It Wrong

The Economics Of Bitcoin – Why Mainstream Economists Lie About Deflation

The Economics Of Bitcoin – How Bitcoins Act As Money

Against The Gold Standard

The Ridiculousness Of Demanding Government Return To A Gold Standard