Bitcoin. NOT FINANCIAL ADVICE. views expressed here are my own. i block liberally. like/retweet does not constitute endorsement. http://tippin.me/@btconometrics

This article attempts to completely invalidate the statistics behind the idea that there is any stock-to-flow relationship to Bitcoin price. The proposed Ordinary Least Squares (OLS) model is shown to be seriously deficient due to the serial correlation in the residuals. The Engle-Granger method is shown to be not usable as a test for cointegration due to requirements for the test not being met. The Johansen method is similarly invalidated. Finally, an Auto Regressive Distributed Lag model (ARDL) is built to test for cointegration. The ARDL model does not falsify the stock to flow relationship. Thus whilst many tests have been able to be shown to be incorrect or have series errors, we have been able to reject the hypothesis that stock-to-flow does not have an important non-spurious influence on the US dollar price of Bitcoin.

Medium is relatively limited for mathematical notation. The usual notation for an estimate of a statistical parameter is to place a hat on top. Instead, we define the estimate of a term as [ ]. e.g. the estimate of β = [β]. If we are representing a 2x2 matrix, we will do so like this [r1c1, r1c2 \ r2c1, r2c2] etc. Subscripted items are superseded by @ — eg for the 10th position in a vector X we would normally subscript X with 10. We will instead write X@10.

Scientific method is difficult for most to comprehend. It is counterintuitive. It can lead to conclusions that do not reflect personal beliefs. It takes a foundation in the method to understand this basic fundamental concept: it is ok to be wrong. This should be something that is taught in school. If we are afraid of getting it wrong, we will never propose anything new. The history of scientific discovery is therefore by its’ very nature surrounded in serendipity. Things that people discover by accident can be just as important as (or more important than) whatever it is they originally set out to do. Their original ideas might have been incorrect or inconclusive, but the things they discovered on the journey built the framework for those who follow.

According to the great modern scientific philosopher Karl Popper, testing a hypothesis for an incorrect outcome is the only reliable way to add weight to the argument that it is correct. If rigorous and repeated tests cannot show that a hypothesis is incorrect, then with each test the hypothesis assumes a higher likelihood of being correct. This concept is called Falsifiability. This article aims to falsify the statistical analysis used thus far to verify the stock-to-flow model of Bitcoin value, as defined in Modelling Bitcoin’s Value with Scarcity[14].

To falsify a hypothesis, first we must state what it is:

Null Hypotheses (H0): Stock to flow does not have a measurable influence on Bitcoin price

Alternative Hypotheses (H1): Stock to flow does have a measurable infuence on Bitcoin price

Readers of the first article in this series[3] will note that we have swapped around the null and alternative hypothesis. Readers will also note we are looking specifically at price, not market cap.

In [14], PlanB chose to test H0 by fitting an Ordinary Least Squares (OLS) regression on the natural log of the market capitalisation of Bitcoin and the natural log of the stock-to-flow. There was no accompanying diagnostics nor any identified reasoning for the log transformation in both variables, other than the idea that a log-log model can be expressed as a power law. The model did not take into account the possibility of a spurious relationship due to non-stationarity.

In [3] we explored some alternative models, including ones that do account for the possibility of a spurious relationship. We tested carefully stock to flow and price with both DFGLS and KPSS tests to verify from both directions that both variables were in fact non-stationary. However, the stock to flow variable is not something uninfluenced by the halving events, where the “flow” is literally cut in half. This is more akin to a structural break, rather than a non-stationary increase. Thus we test each halving period’s stock to flow for stationarity with the DFGLS and KPSS test, as well as the entirety of the variable with the Ziffer-Andrews test for stationarity (which was developed to deal with such structural breaks).

Ordinary least squares regression is a way to estimate a linear relationship between two or more variables.

First, let us define a linear model as some function of X that equals Y with some error.

In order for [β] to be a reliable estimate, some basic assumptions must be met:

In the first article of this series [3] we tested the first three of these assumptions. We will now test the fourth — that is how bad is the serial correlation in the residuals (and can we fix it?)

Serial Correlation in the Residuals

We begin by looking at a scatter plot matrix of the lags of the residuals. Serial correlation will show up here as essentially a straight line from the lower left corner of each individual graph to the upper right corner. 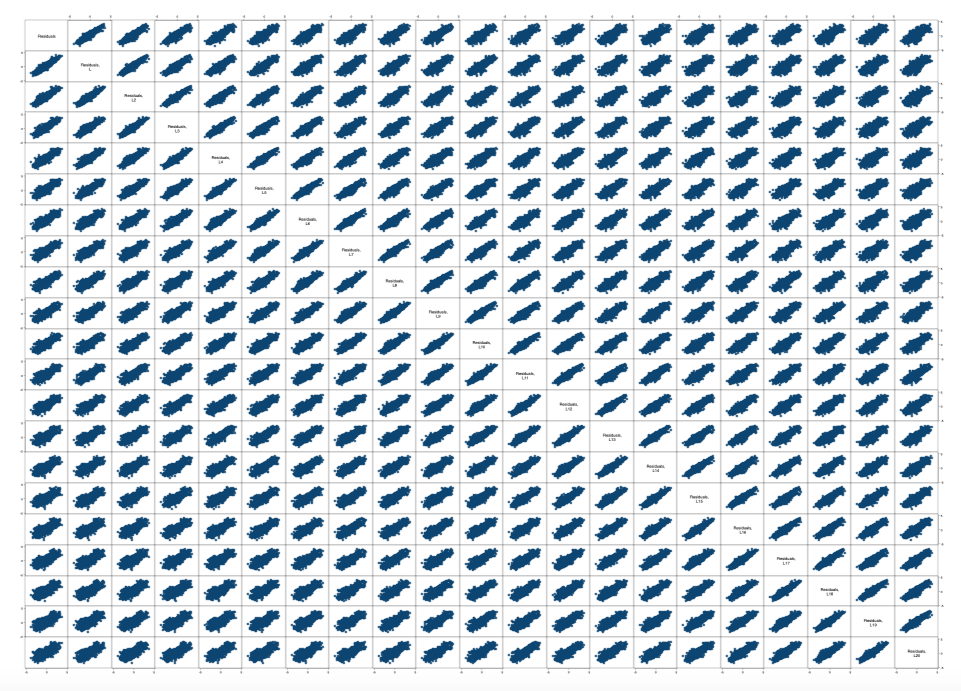 The visual evidence in figure 1 is quite damning. There is serial correlation heavily present. We can confirm this with the Breusch-Godfrey test. The null of the test is no autocorrelation present. 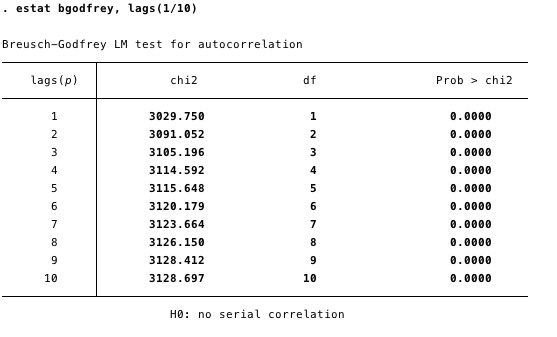 Figure 2 — Breush-Godfrey test for autocorrelation — can reject the null with a high degree of confidence.

We can reject the null in Figure 2 for all lags in the test. This confirms our visual inspection results of autocorrelation in the residuals.

Prais-Winsten regression assumes the residuals follow an AR(1) process and accounts for it via the “rho”. Below, we can see the original OLS in figure 3 and the Prais regression in figure 4. In figure 4, we also see the values of the Durbin-Watson statistic — first for the unchanged OLS, and then after accounting for serial correlation. 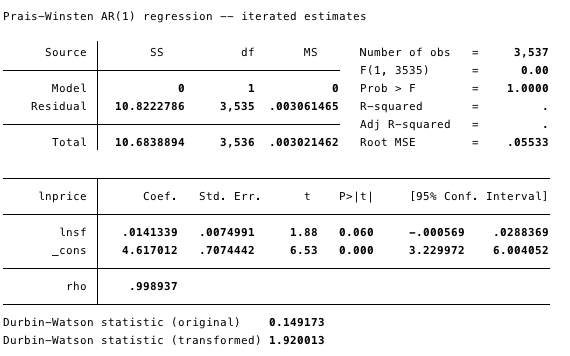 Durbin-Watson is for this case interpreted as the closer to 2, the less likely there is to be serial correlation in the residuals.

As we can see, the Prais-Wnisten regression accounts for the serial correlation, however the influence of stock to flow appears greatly diminished, and in fact in this instance, we cannot reject the null hypothesis (that stock to flow does not have an influence on price).

In [1], we used the Johansen test for cointegration. One of the key assumptions in that test (and the simpler Engle-Granger test) is that both variables are non-stationary.

We tested for stationarity in [3] using the DFGLS test and the KPSS test and concluded that both variables were non-stationary. However, conceptually it can be seen that the halving events are more like structural breaks in the stock to flow variable. Thus here we test for stationarity using those tests within the halving epochs. 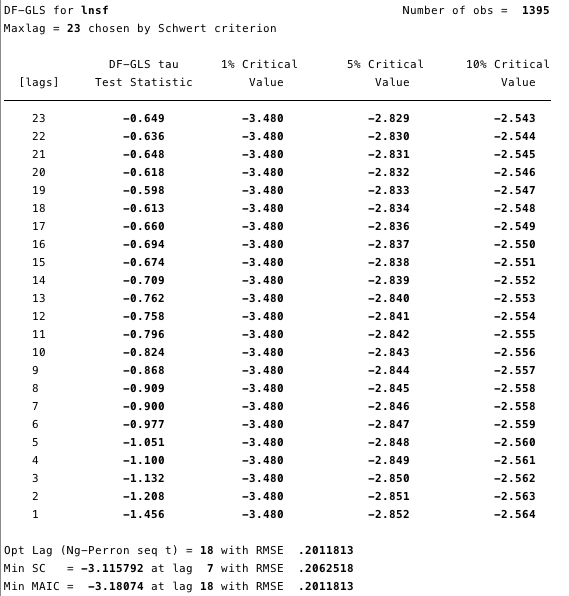 We can conclude for the first epoch, that there is insufficient evidence to reject that stock to flow is non-stationary. 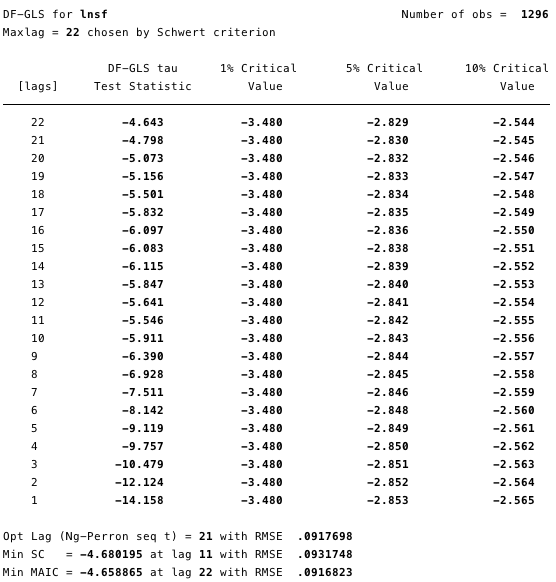 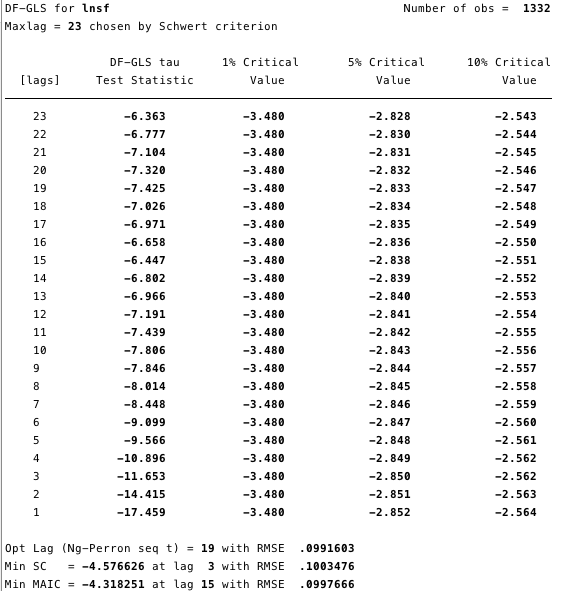 In the third epoch, the evidence is overwhelming that stock to flow is stationary. There appears to be a trend toward stationarity through the epochs.

The Zivot-Andrews test for unit root allows for structural breaks in the series, which conceptually aligns with how the halvings impact the flow (and consequently the stock to flow ratio).

Allowing for break in intercept

Clearly the Zivot-Andrews test works well here and agrees with the broken down DFGLS tests.

Log(Stock to Flow) is stationary. I(0). This would be fantastic news if Log(price) was also stationary (it would mean the original OLS PlanB did was valid), however it is non-stationary — the Zivot-Andrews test cannot the null.

Allowing for break in intercept

The Johansen test was used to test for cointegration in [3] — the problem is, we cannot mix orders of integration in this test. We cannot mix them in the simpler Engle-Granger test, either. There is only one possible test that the author is aware of that can deal with mixed order integration — the ARDL bounds test.

Autoregressive distributed lag (ARDL) models regress the dependent variable on its lags and on the lags of one or more additional regressors.

ARDL models can, among other things, be used for the estimation and testing of level relationships. Key contributions in this area are [12] and [13]. For a succinct exposition of ARDL models in the context of cointegration, see [5 & 6].

An important feature of the ARDL model is it allows us to investigate relationships between mixed orders of integration. 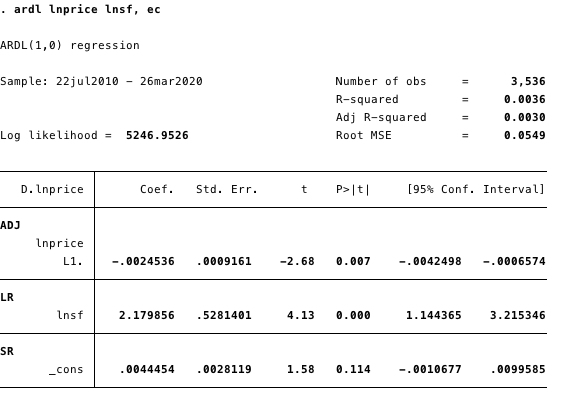 Figure 8 — ARDL model on daily data. We can see stock to flow has a significant long run influence on price. 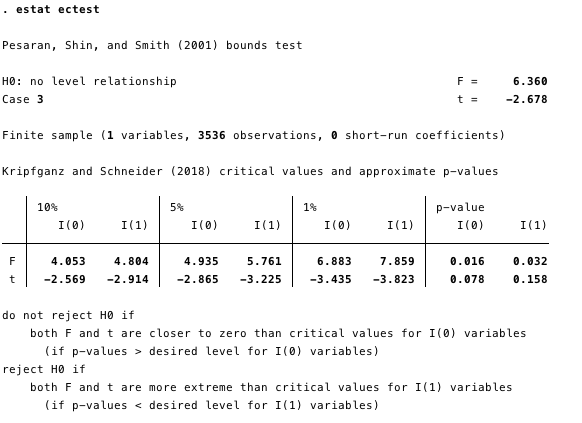 Figure 9 — Bounds test for a level relationship. We can reject the null hypothesis of no level relationship easily at the 10% critical level, further providing evidence to the s2f claim (NB we are looking at the I(0) variable s2f). 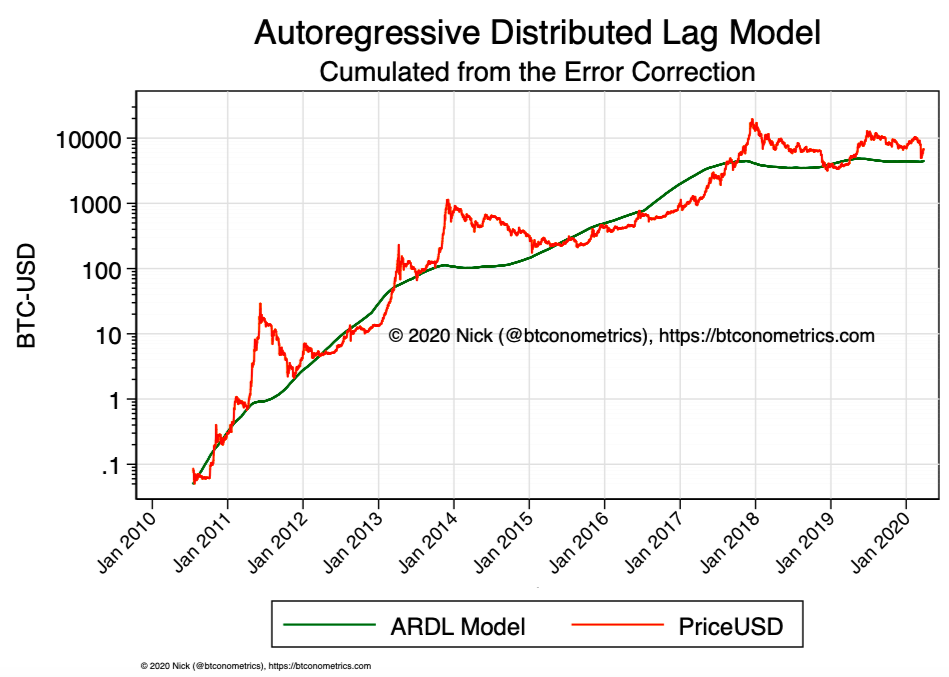 The bounds test for a level relationship in the ARDL model provides very robust evidence to reject the null hypothesis and conclude that stock to flow does have a significant influence on the US Dollar price of Bitcoin.

Further research is required as the coefficient for the long run parameter is significantly lower than the OLS parameter. Future research should focus on improving the ARDL specification, including adjusting for confounding or potentially effect mediating variables (such as the difficulty adjustment).