Skeptic’s Guide to Bitcoin: Bitcoin and the Promise of Independent Property Rights

A framework for skeptics, part 3

This is part 3 of a 4 part series. See additional articles below 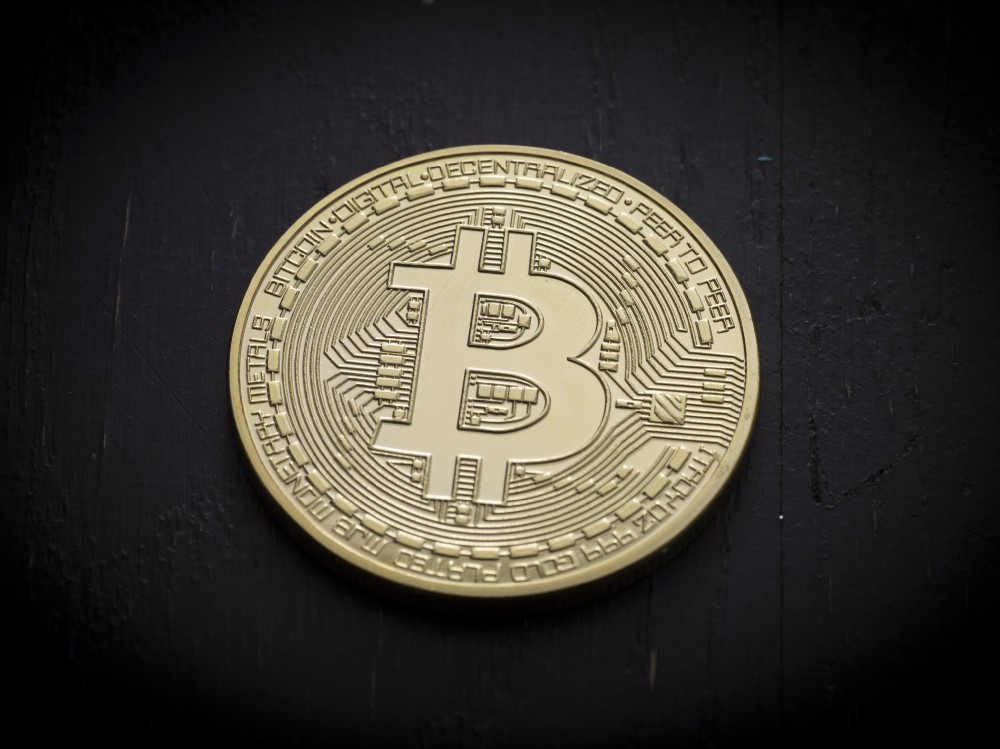 Photo by Thought Catalog on Unsplash

In the second part, we showed how Bitcoin is a novel social and economic institution. But the question remains: Who is going to use it? Is there a place for Bitcoin among other institutions, and if so, where is it? Is Bitcoin just a terribly inefficient competitor to PayPal and Visa, like the media wants you to believe, or something more?

To put Bitcoin on the map with other institutions, let us first understand why humanity built social institutions in the first place.

Humans don’t scale. Sure, we can learn, but we can’t upgrade our brains and bodies like we can upgrade the hard drives and processors in our computers and machines. In fact, our physical and mental capacities have remained virtually unchanged since we roamed the earth as hunter-gatherers. Instead, we scale through cooperation. All scientific breakthroughs, all increases in productivity and prosperity, can be traced back to our ability to cooperate with each other.

But because our world is fundamentally uncertain, cooperation doesn’t come easy for us. We spend massive amounts of efforts on predicting how other people are going to react to our actions, and if those actions could affect us negatively.

When we can’t reliably predict the behavior of others, our lives become a prisoner’s dilemma. Should we cooperate with someone else to hunt down a stag, or stick to a rabbit which we could hunt alone? How can we trust him not to hit us over the head with a club and steal the stag? The path for humanity to “scale” and prosper is to find a way to break these prisoner dilemmas and cooperate anyway.

Game theory gives us two solutions to the prisoner’s dilemma. The first is to turn the one-time-game into a repeated (or “iterated”) game. If you and your potential hunting partner meet again tomorrow, you are more likely to behave, as each of you has to worry about the other’s retaliation. But such repeated social interactions — or experience — are only possible with a limited group of people at the same time, as proposed by the anthropologist Robin Dunbar.

Dunbar’s number is a suggested cognitive limit to the number of people with whom one can maintain stable social relationships. It’s proponents assert that numbers larger than this generally require more restrictive rules, laws, and enforced norms to maintain a stable, cohesive group.

The second rule, which Dunbar alludes to, is to “tie our own hands” and restrict ourselves from taking negative options that could hurt others. One such way is by adopting a shared morality and making sure these rules are socially enforced. But for groups that exceed Dunbar’s number, we need institutions.

The most basic of all institutions is a monopoly of violence. By empowering a specialized group of people to a focus on protecting your town, you can more easily engage in productive enterprises because you don’t have to worry if you can protect the fruits of those enterprises. Establishing a strong and benevolent monopoly on violence also strengthens the shared morality and formalize it to a formal legal system. The rules become more credible, after all, if there is a party strong enough to overpower any individual and make sure no one is “above the law”.

On the shoulders of the monopoly on violence and the legal system, rests the most important institution of all: the right to private property. A private property system, protected by the state, gives you the exclusive right to your own resources and to use them as you see fit. Research has found that prosperity and property rights are inextricably linked.

Having well-defined and strongly protected property rights is the basis for all higher institutions: Markets are match-making systems between buyers and sellers that allow for specialization and the division of labor, while money allows for the creation of accurate price signals to producers and consumers.

We need a monopoly on violence to have a legal system, and we need a legal system to have property rights. We need property rights to have markets and firms, and we need markets and firms to have capitalism. It is through the invention of new institutions, each building on the existing ones, that civilization advances. Here is a simplified image of the institutional stack: 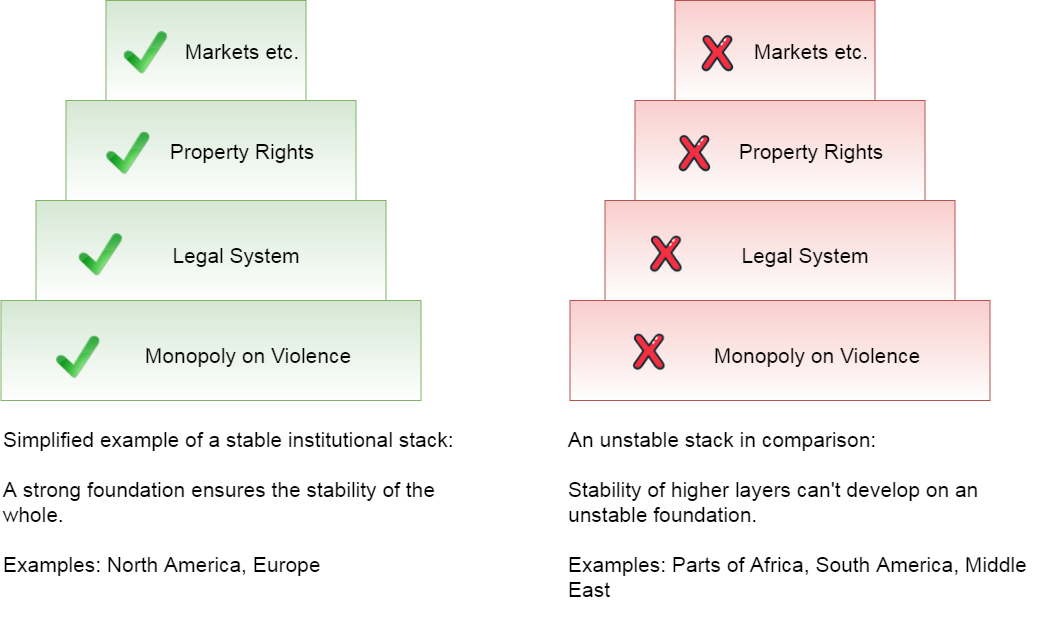 By streamlining human interactions, social institutions break the prisoner’s dilemma and have us worry less about being harmed by others. The resulting increase of mutual predictability allows us to extend our trust to strangers and enable cooperation beyond Dunbar’s number.

If we see bitcoin as a novel institution, which rights does it unlock? Let’s remember the rules of the Bitcoin social contract: Anyone can use the bitcoin network without permission (no censorship) and only he who owns money can spend it (no confiscation). Further, there is no central party that can print more money ahead of schedule and steal purchasing power from others (no inflation). Finally, anyone can verify that the rules are being followed before they accept a payment (no counterfeiting).

Do these rules stand the test of reality? In his excellent paper “How Bitcoin functions as property law”, Eric D. Chason states that “Satoshi Nakamoto has created a form of property that can exist without relying on the state, centralized authority, or traditional legal structures.”

I will go one step further and say that the bitcoin network, and, by extension, its money token enable the highest form of property rights of any socio-economic institution in the history of man.

A New Era in Property Rights

That is the key innovation of Bitcoin: It detaches property rights from the legal system and the monopoly on violence. For the first time, we can have property that does not rely on a local authority to enforce and protect. It is easy to conceal, defend, divide, move, and verify — all by yourself, granting you the highest level of personal sovereignty.

Property rights used to depend firmly on other layers of the social institution stack, specifically the monopoly on violence and the legal system. If the bottom of this stack is shaky, you cannot have strong property rights. But because Bitcoin stands entirely on its own, it can bring the highest level of property rights to anyone in the world, no matter the quality of their lower-level institutions, the government or legal system.

Bitcoin unlocks a different dimension of value. In the same way that boats unlocked transport over water, and airplanes through the air, Bitcoin unlocks a new, alternate layer to store and move value — as the first native digital asset. It is the ability to exist solely in that digital world, from which Bitcoin derives all of its properties. It cannot be attacked in the physical space the way that physical assets can.

The implications of this will only reveal themselves over time, but we can already speculate who bitcoin maybe be tremendously useful for:

Using Bitcoin gives these people the ability to cooperate more effectively, increase their productivity and, as a result, their prosperity. It allows them to save money for the future, to build capital that can be invested in more productive enterprises and let them partake in global trade with others all around the world.

Bitcoin can also benefit those who never use it. As a hedge against central bank error, it makes the global financial system more resilient. Ironically, it can also improve other monetary and property systems around the world. What? Yes, that is the effect that competition has on a market. If you are a customer of Apple, you benefit from Samsung releasing a new phone, because it forces Apple to improve the quality of their product to stay competitive. 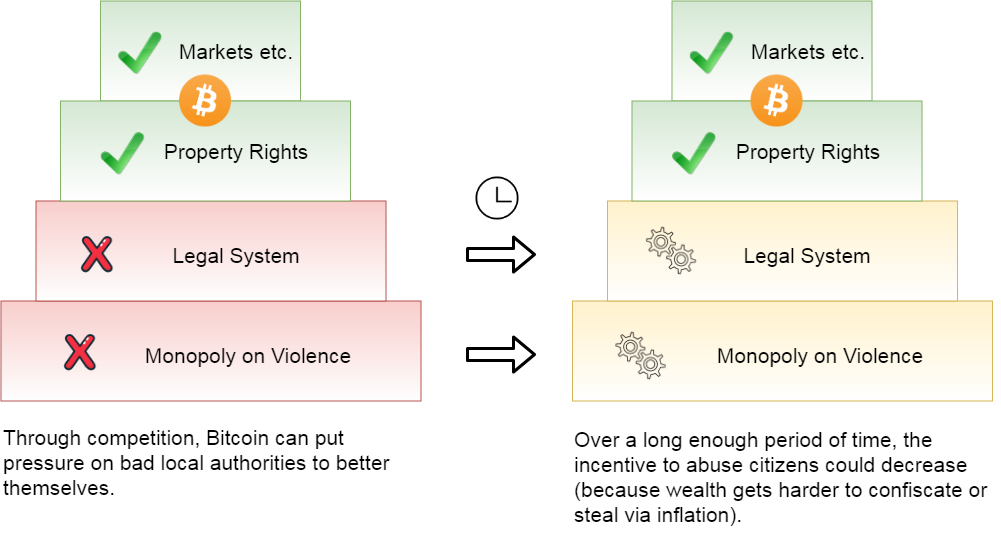 As a result, we could witness a quality improvement in monetary and property systems, because bitcoin opened the door for competition and created a market. This also shapes our understanding of what Bitcoin is NOT: a competitor to VISA or PayPal. It competes with local governments, legal systems and property rights — the fundamental layers of the existing stack — not with the payment processors that sit on top of it.

Civilization scales through cooperation, but cooperation between strangers is inherently hard. Social institutions can solve this prisoner’s dilemma and allow us to cooperate on a larger scale. At the bottom of the stack, we need a stable and benevolent monopoly on violence, to enforce the rules of the legal system and establish property rights. Until now, it was impossible to have strong property rights in places with a weak local government. Bitcoin does not depend on the existing system in any way and can give us the highest form of property rights, no matter who and where we are.

I want to thank Yassine Elmandjra, Nic Carter and Miles Suter for their contributions.