Tyler Bain is a licensed professional engineer and a certified Bitcoin professional who specializes in the electrical power grid and bitcoin mining mechanics. He recently co-wrote “Cryptocurrency Mining for Dummies”. 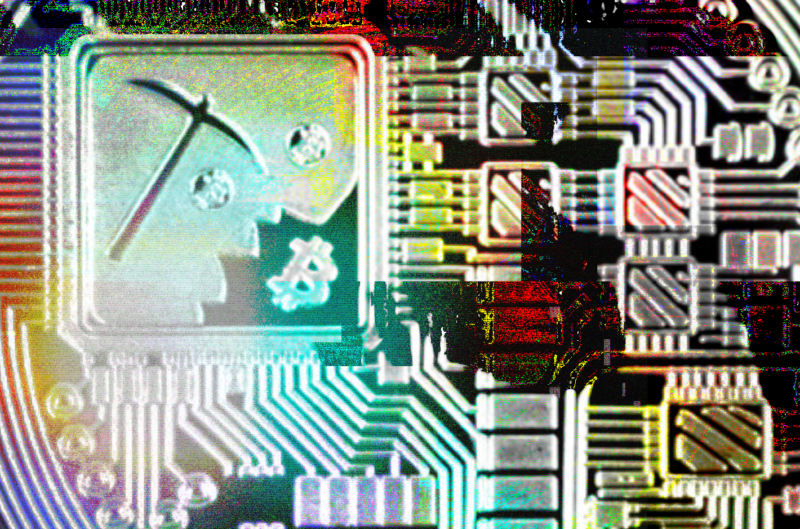 There have been many claims in recent years that bitcoin and the miners securing the network via SHA-256 proof of work use an unconscionable amount of energy. But what data are these claims based on, are the source calculations using flawed or sound approaches and assumptions? How much electrical power does the network draw and how much electrical energy has the Bitcoin network used historically?

Due to the vast, globally distributed topology of the Bitcoin network, the amount of electrical power and energy that miners consume isn’t exactly verifiable, instead it must be estimated. Among the energy consumption hysteria over the previous few years, a surprisingly large number of reputable sources have weighed in and attempted to estimate Bitcoin’s network energy consumption in more level-headed and data-derived ways:

Small Bitcoin miners draw about 1,300 watts of power and use about 31,200 watt hours of energy over a 24-hour period.

In theory, the Bitcoin mining industry is rational, profit maximizing and perfectly competitive: mining marginal revenue should tend to equal marginal cost (MR = MC). Meaning, on long enough time horizons, the market should find an equilibrium, where the cost of energy consumed in a unit of bitcoin’s production should be roughly equivalent to the unit’s market value at the time of minting. This calculation methodology can be distilled as, “How much can Bitcoin network miners afford to spend on electricity?”

Typically, these types of estimations are too dependent on a single volatile variable: the market exchange price of bitcoin. Below is a quick, simplified example of this type of estimation:

Let’s try this estimation. Bitcoin blocks are generated roughly every 10 minutes — a rate of 6 per hour, or 144 every day. Currently, a single bitcoin block contains 6.25 BTC of coinbase block subsidy; that’s 37.5 BTC per hour, or 900 newly-minted bitcoin rewarded to miners daily. With bitcoin’s current market exchange price of about $10,750 at the time of this writing, that is roughly $9,675,000 earned per day that bitcoin miners have available to spend on electricity.

Average U.S. electrical costs in cents per kWh by state, per EIA data

This amount of daily energy equates to roughly 35.3 TWh of yearly usage that the bitcoin miners could afford to consume, if we take a snapshot today and assume constant bitcoin price for a year and U.S. average electrical costs.

While this method is overly reliant on bitcoin price, it is also heavily dependent on the assumed electrical energy cost for miners. The calculations and conclusions of this kind of estimate can be drastically different or even manipulated depending on the assumptions used as inputs: energy costs ($/kWh) and the price of bitcoin ($/BTC).

Here we used the average U.S. electrical cost of $0.10/kWh. However, in the U.S., electrical costs actually vary seasonally, from state to state, city to city and, in some cases, neighborhood to neighborhood. Global electrical costs have the same incongruence. This isn’t even including wide-ranging industrial, commercial or residential electrical energy rates, adding even more sources of error to these economics-based estimation techniques. And, in fact, this calculation’s heavy energy price dependence has yet another flaw: some miners’ high in ingenuity have near-zero fuel cost as they harvest excess, otherwise wasted, inaccessible or curtailed energy sources.

This quick exercise highlights, in my opinion, why this type of economics-based estimation approach is a gross oversimplification fraught with the following issues:

Physics–based network energy estimation approaches, on the other hand, tend to be a very rigorous type of “running of the numbers” that the Bitcoin community is accustomed to.

So, let’s try out this style of estimation using bitcoin proof-of-work difficulty data and OEM-published data. Bitcoin network difficulty self-adjusts once every 2,016 blocks, or roughly once every two-week period. This difficulty adjustment is to compensate for block production speed discrepancies and, thus, network hash rate fluctuations. 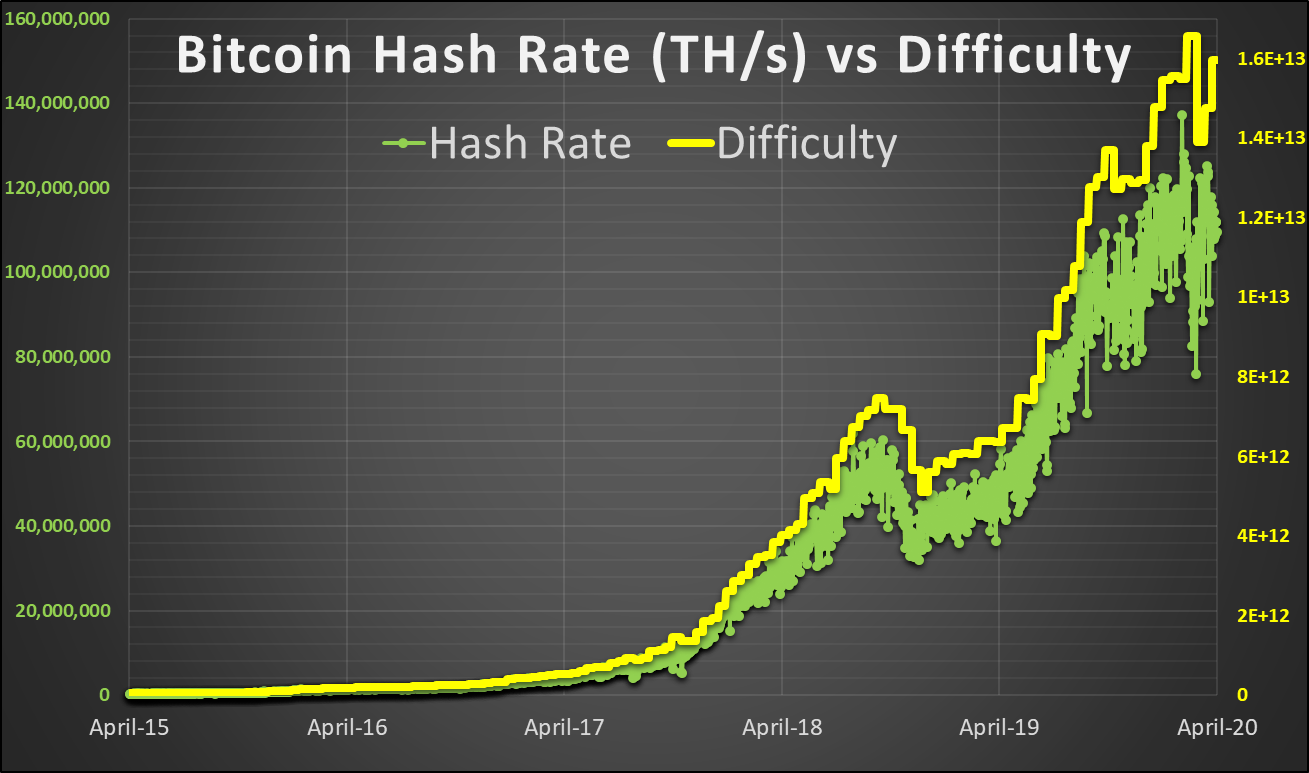 This difficulty and proof-of-work relationship allows us to derive an estimate for network hash rate based on the block production rate and the associated difficulty level. From the amount of work done at the various difficulty levels over the previous decade, we can roughly estimate the amount of SHA-256 hashes computed per year on the Bitcoin network, shown below in terahashes per year (Th/year) or a trillion hashes per year. We can also do this same type of exercise with daily data to produce more granular calculations (spoiler: keep reading). 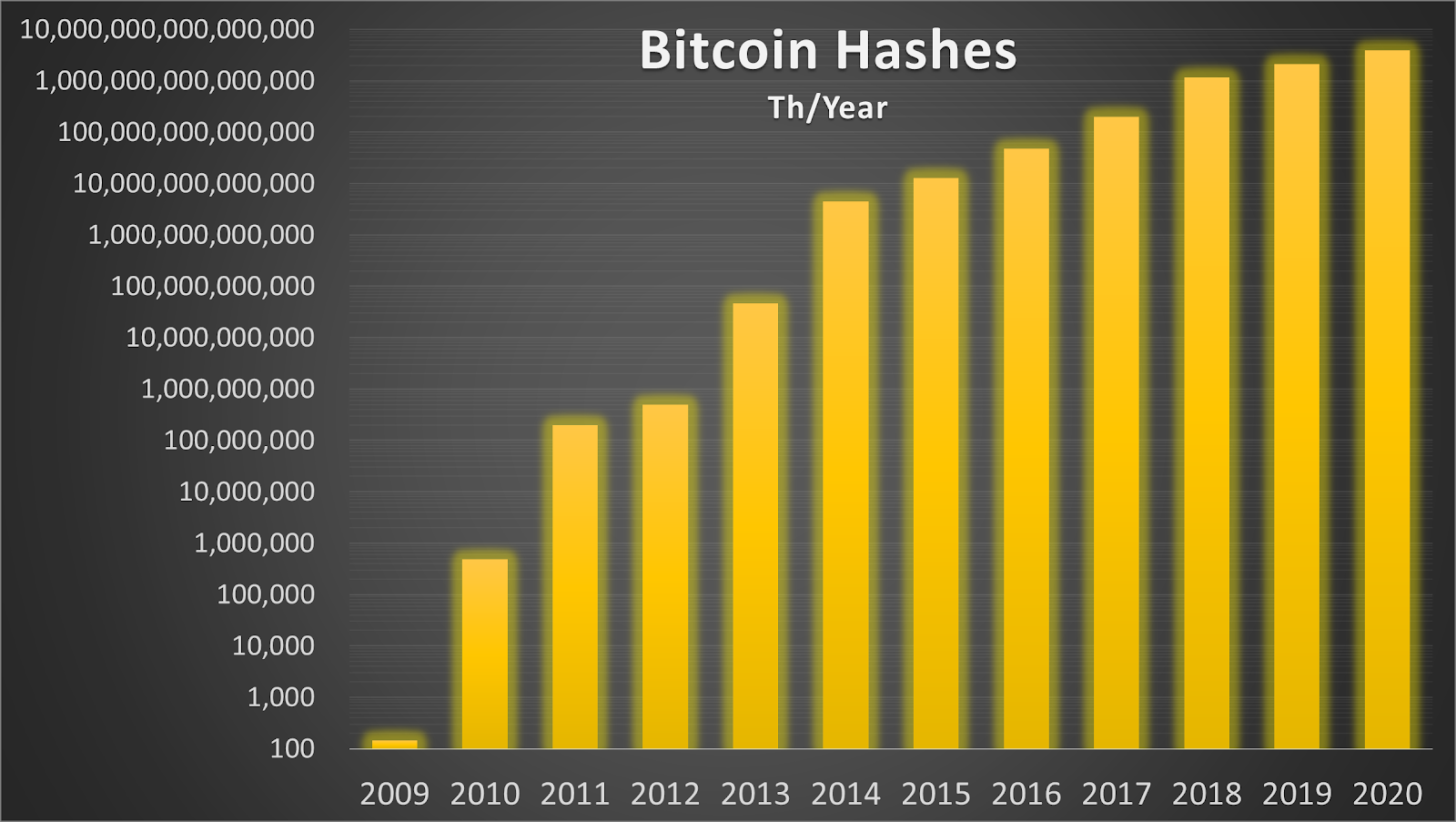 Bitcoin is on pace to have roughly 3,934 yotahashes computed on the network in 2020 or  about 3,934 septillion hashes (“yota” and “septillion” are the largest of the Scientific International (SI) prefixes to date, (10²⁴)), 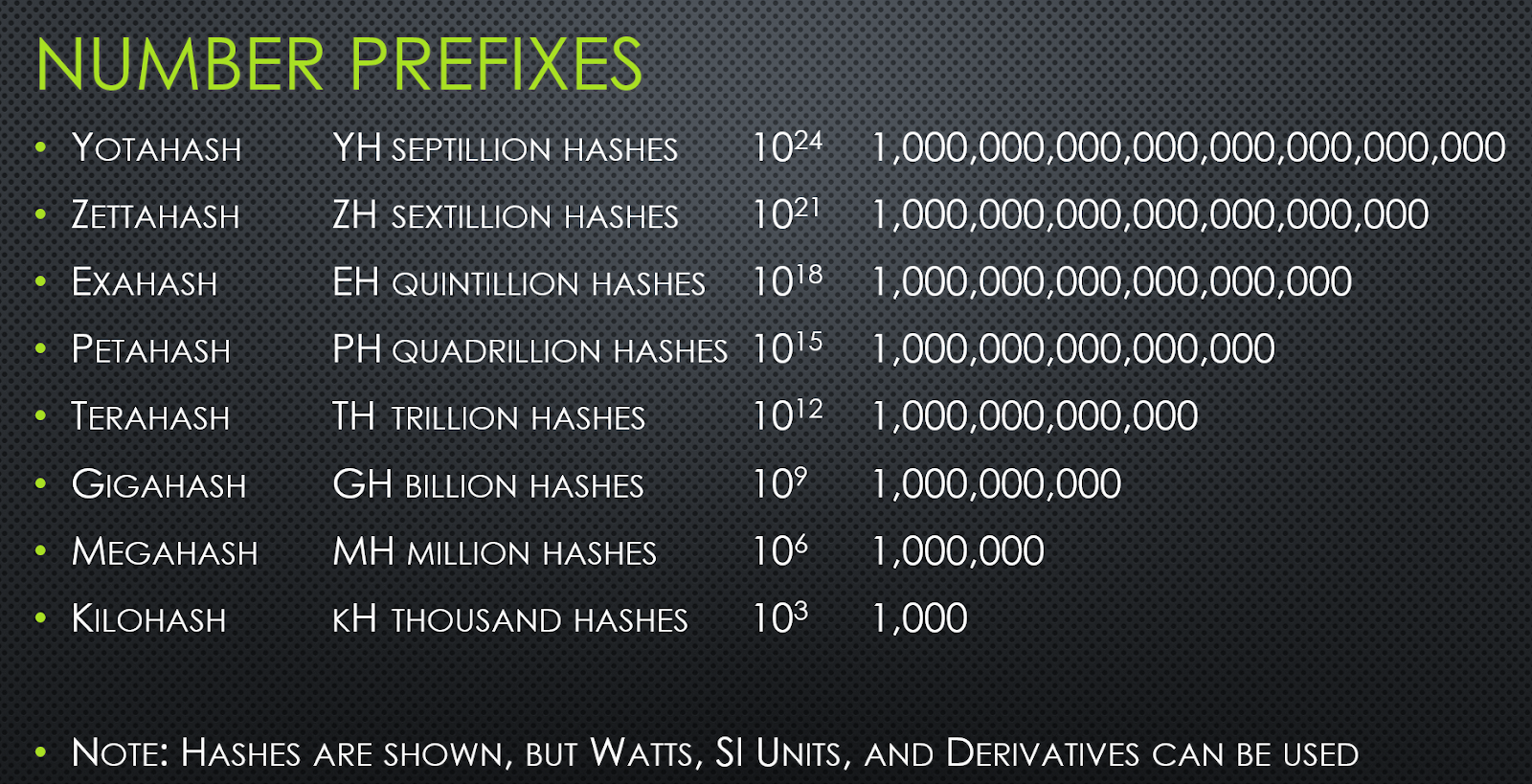 Now that we have an estimation for the amount of hashes per year, next we must compile mining rig efficiency data over the past 11 years to understand how much energy would have been required to produce that amount of work.

Here it is important to understand the different types of mining equipment that have provided work toward the Bitcoin blockchain over the years. Each era and year has distinctly different proof-of-work efficiency characteristics, which change the network’s energy consumption values over time. From the humble beginnings of the Bitcoin genesis block being built by work derived from CPUs (central processing units), to blocks eventually being constructed with GPUs (graphics processing units), then on to FPGAs (field programmable gate arrays), and finally ASICs (application-specific integrated circuits) the Bitcoin network has evolved at a stunning pace. 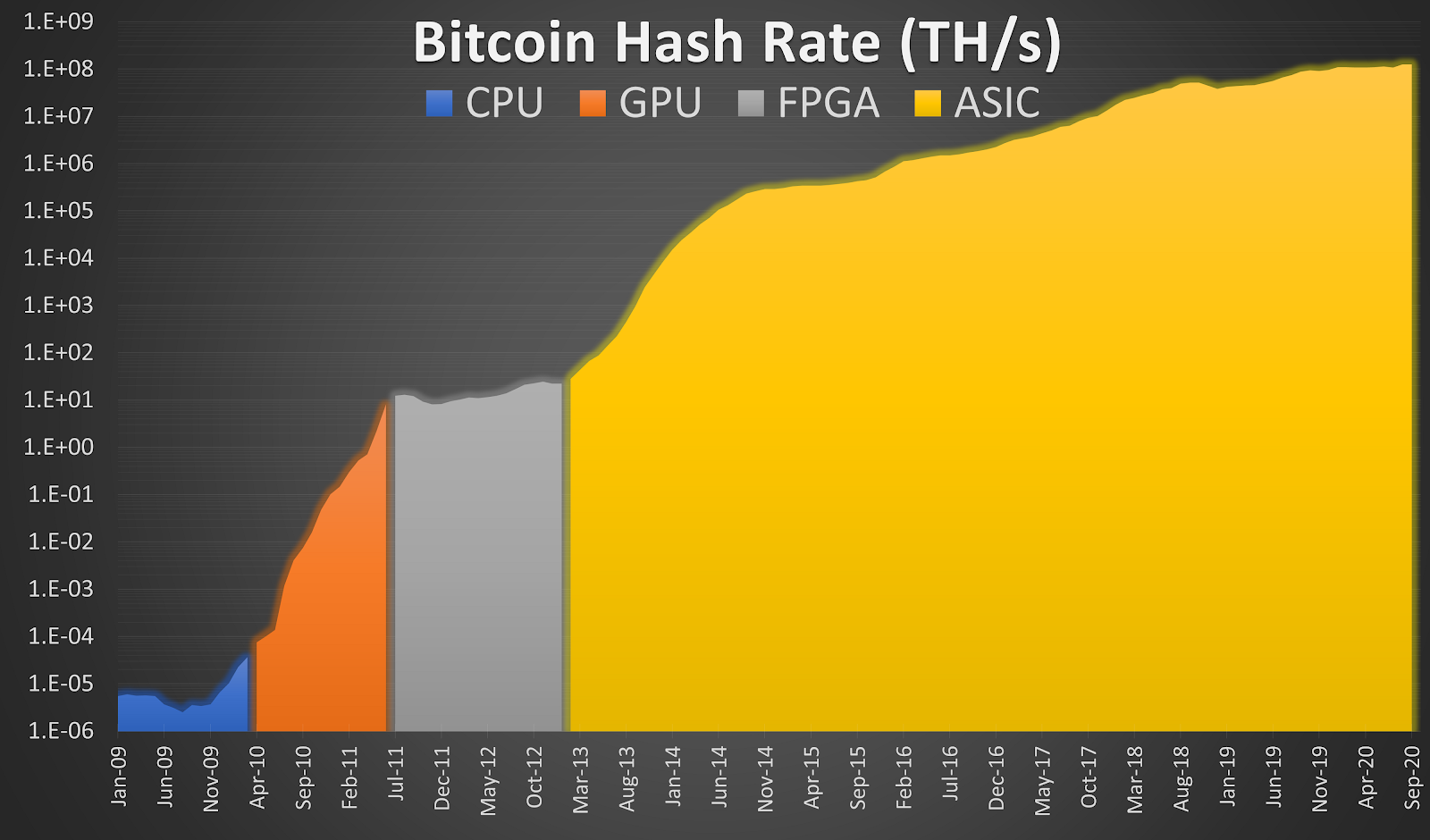 As you can see in the log scale chart below, over the past eight years, bitcoin mining ASICs’ heat rates have been steadily marching lower every year, meaning network mining efficiency has been increasing. 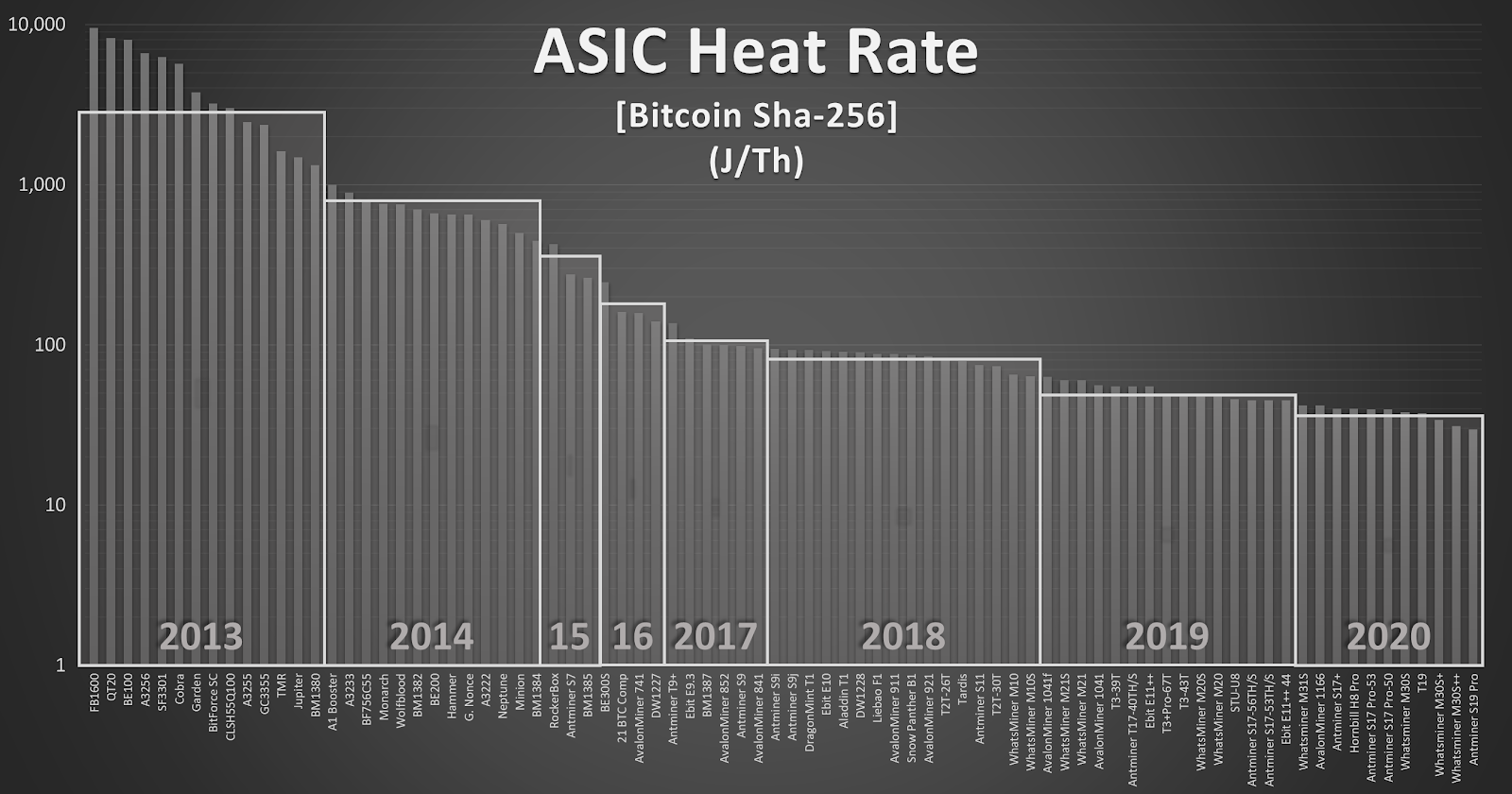 Translating this data into an average yearly heat rate (chart below) shows a similar steep decline during the entire history of bitcoin mining. CPU, GPU and FPGA benchmarks along with published OEM power usage data was used to estimate 2009 to 2012 network average heat rate. ASIC miners announced in 2020 were visualized above and below to show the continued decrease in hash heat rate, but they were discarded from the energy estimations as they are not yet publicly available. 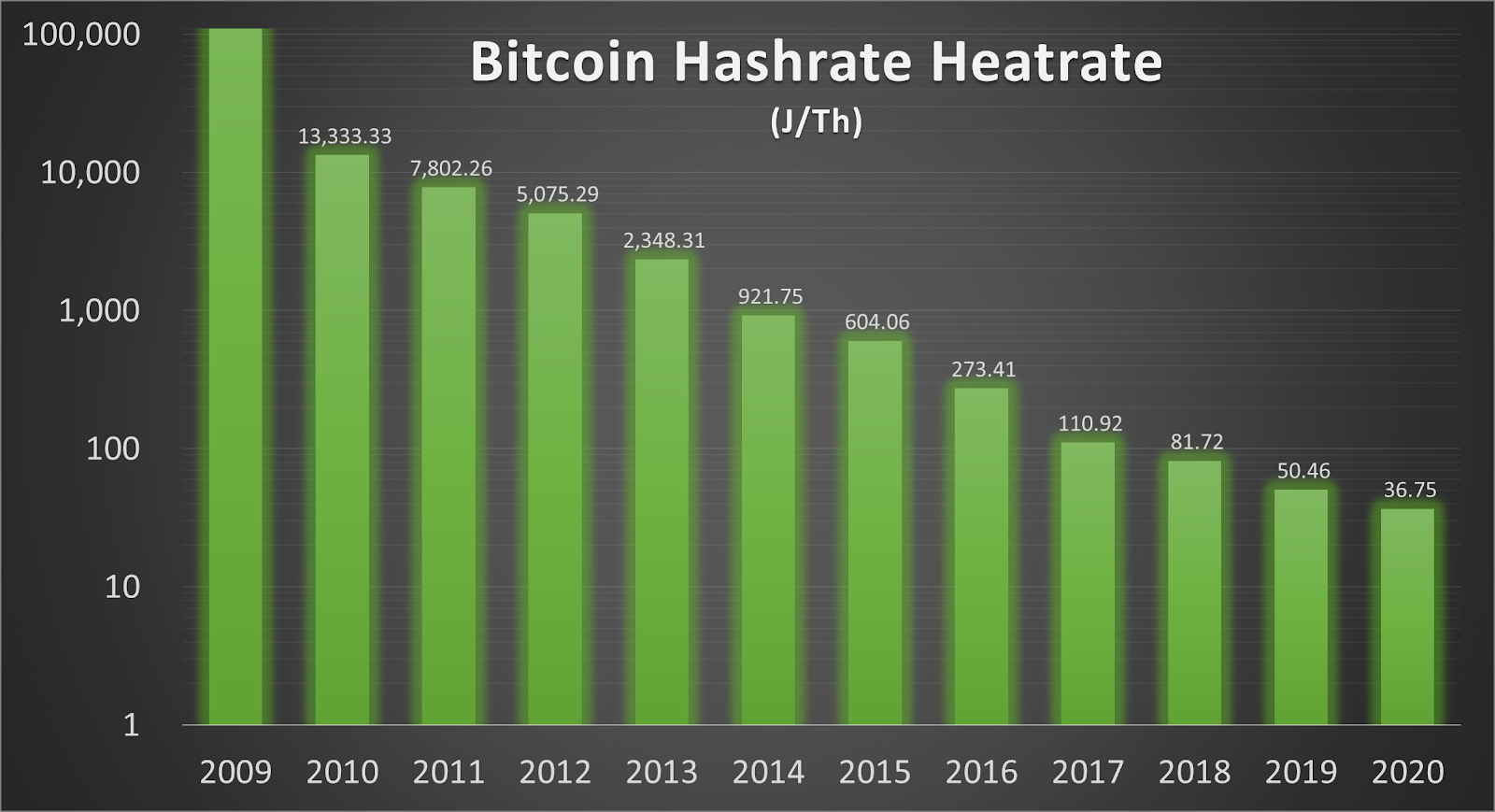 So, now that we have compiled all of the necessary data (yearly hashes and yearly hash heat rate), let’s combine them via an engineer’s attempt at bitcoin mining energy stoichiometry:

Simply multiply the yearly work completed (terahash/year) by the yearly estimated heat rate (in joules/terahash) for miners on the system and you arrive at a joules/year estimation. We will convert from joules/year to kWh/year (a kWh is equal to 3.6 megajoules) and below those yearly energy estimates are charted. 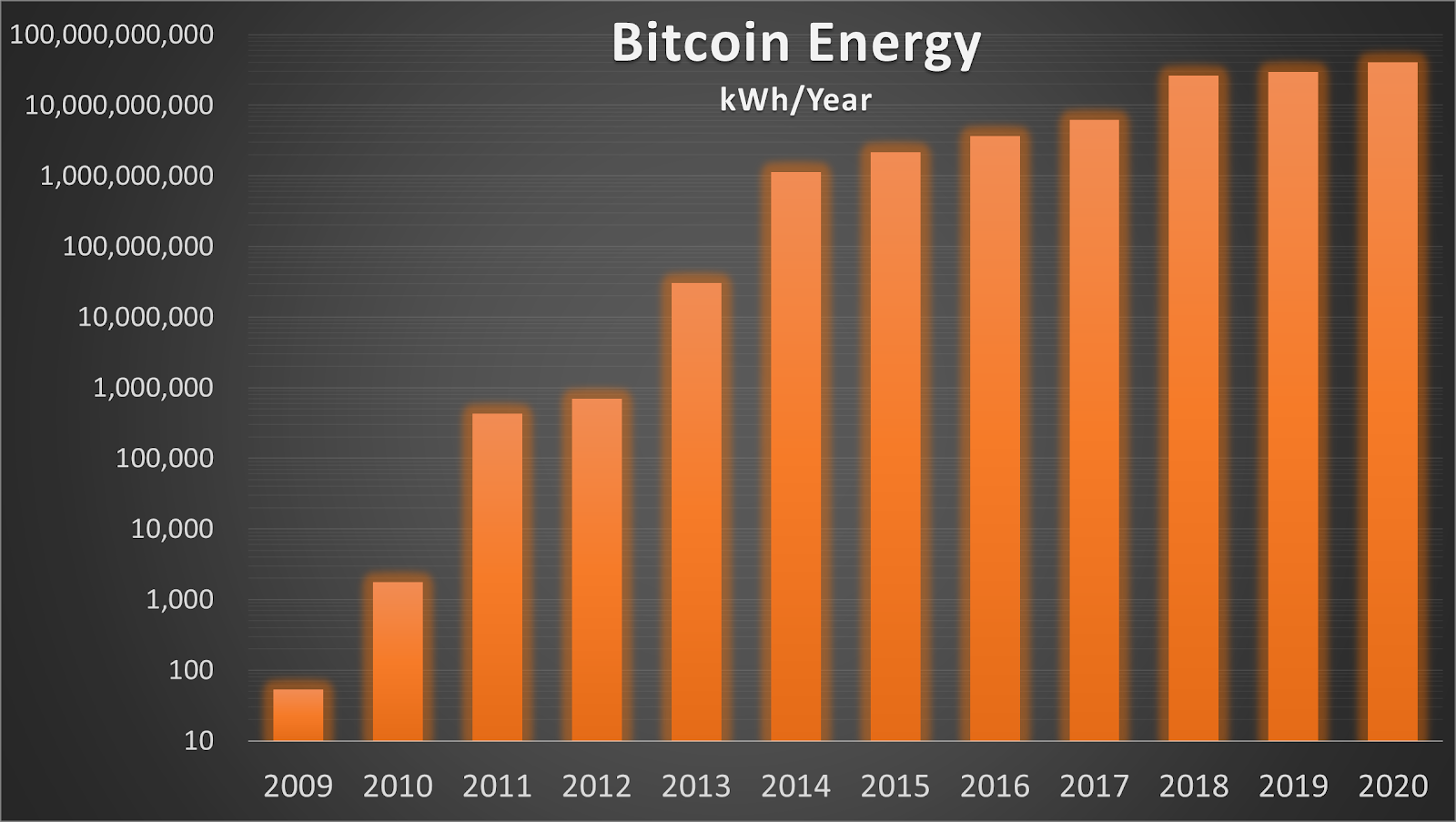 However, this physics-based estimation method also has some issues:

Where do these yearly energy consumption estimates fall among the previously-cited calculation attempts? Interestingly enough, both of our calculations, even using drastically different methodologies and with all of the shortcomings discussed above — the economic-based estimation (35.3 TWh) and the physics-based estimation (40.17 TWh) — are very similar in value. They also fall within the range of a variety of other popular estimations from noteworthy individuals, entities and institutions shown in the chart below. That all of these estimations are fairly similar in magnitude lends credibility to the various different estimators as well as the wide variety of methodologies and different assumptions used.

Noteworthy below: it appears that the Bitcoin network hash rate (EH/s) is beginning to decouple from the general yearly energy (TWh/year) estimation trend. This may be due to the decreasing heat rate of SHA-256 ASIC mining equipment if the estimate is physics based, or due to the halving and price stagnation if the estimate is economics based. 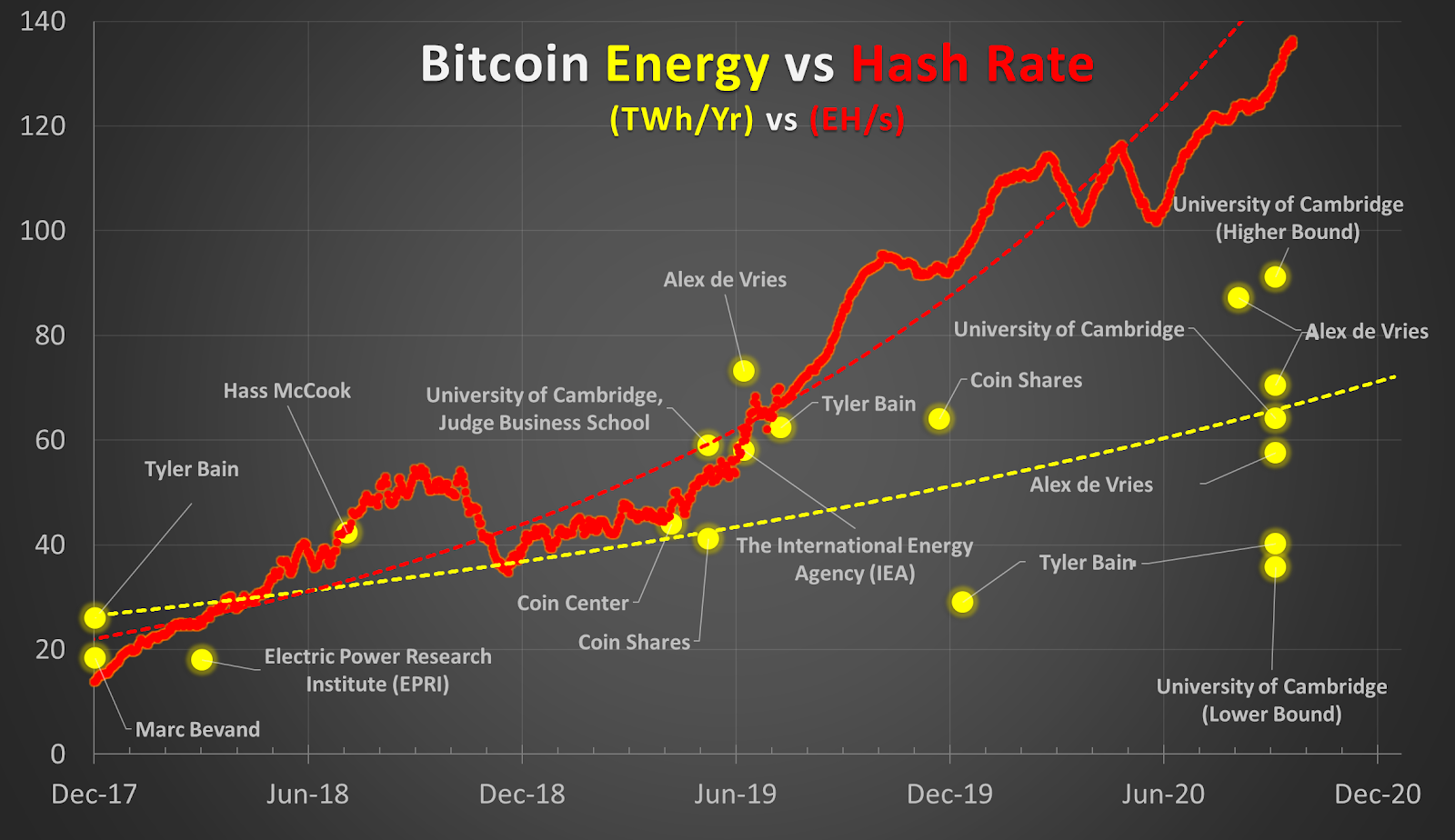 This chart above shows yearly energy estimation snapshots at time of publishing in TWh/year, but a few of these sources (University of Cambridge [C-BECI] and Alex de Vries [D-BECI]) actually publish these yearly estimates on a daily graph going back a few years. This gets back to the previous energy vs. power discussion: logic should prevent plotting yearly energy estimations on a daily axis.

Regardless, I thought it would be worth comparing these published estimates with our above calculations using more continuous time series data going back to late 2017 (the previous market all-time high). The economic and physics calculations, the Cambridge estimates, as well as Digiconomist‘s results are all fairly similar in magnitude over time, again adding some peer review and validity to these different estimation techniques. 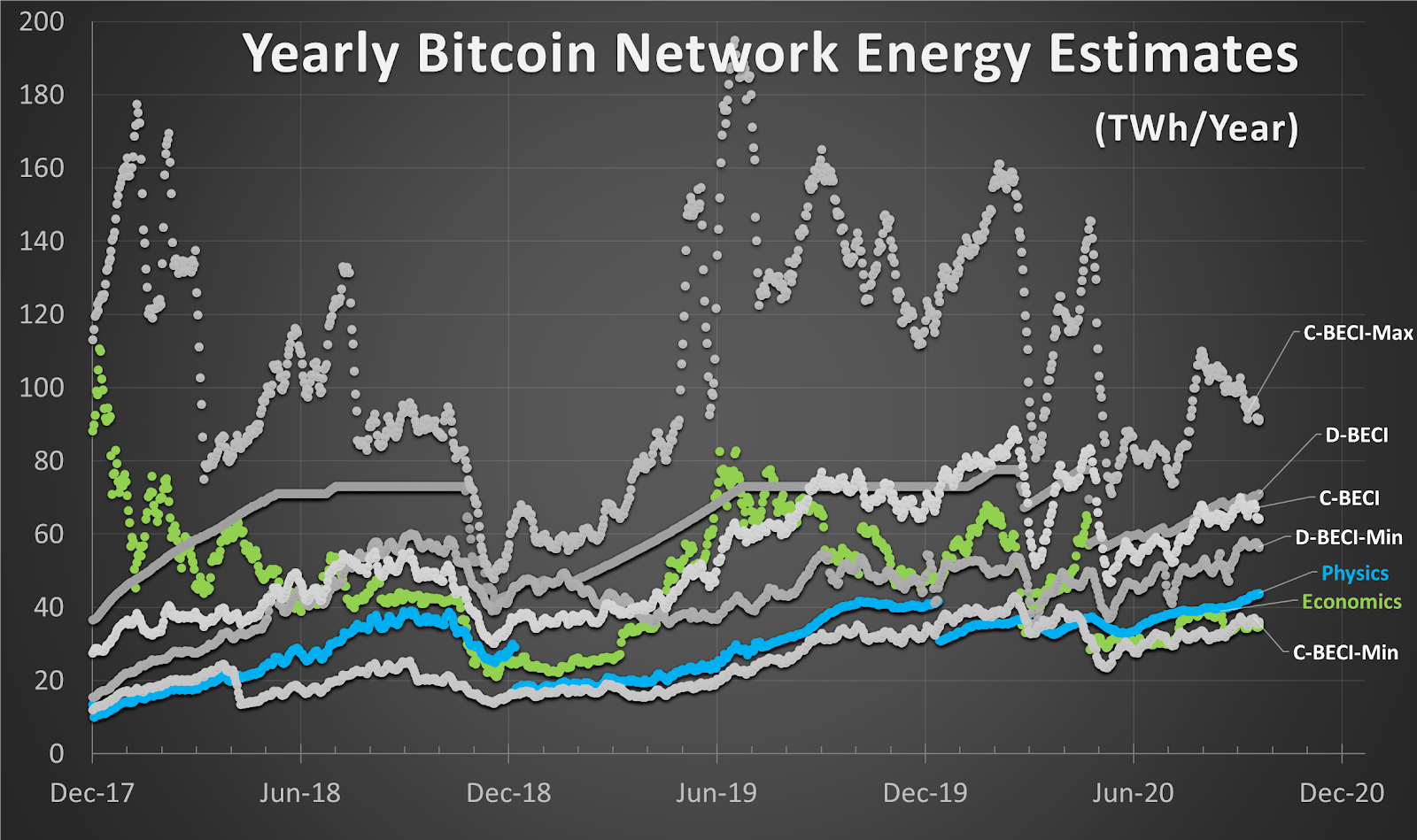 Our above estimation methodologies appear to align nicely with the other various daily interval yearly energy estimates, so they were averaged together to create a sort of Composite Bitcoin Energy Index (CBEI) as shown below in TWh/year. Each of these estimations have different assumptions, varying levels and sources of inaccuracy, and thus their composite may be more accurate. This composite of estimations (CBEI) has just recently retested the 60 TWh threshold for total yearly Bitcoin network energy consumption. 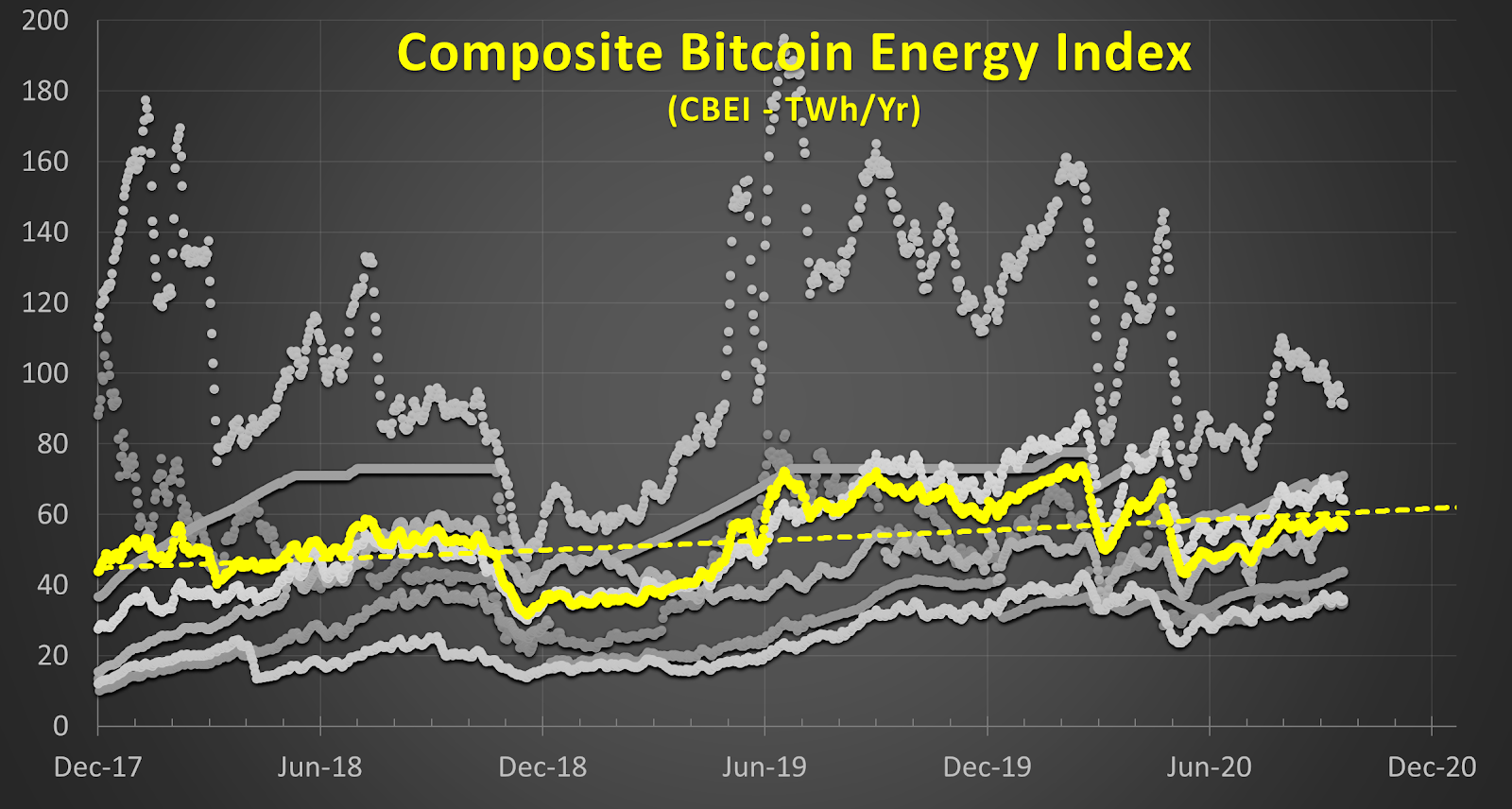 How does this composite energy index compare to Bitcoin network hash rate over time? The CBEI shows a similar decoupling as hash rate and energy around early 2019 with hash rate continuing to rise and energy consumption staying relatively steady as ASIC heat rates and bitcoin mining incentives have shrunk. 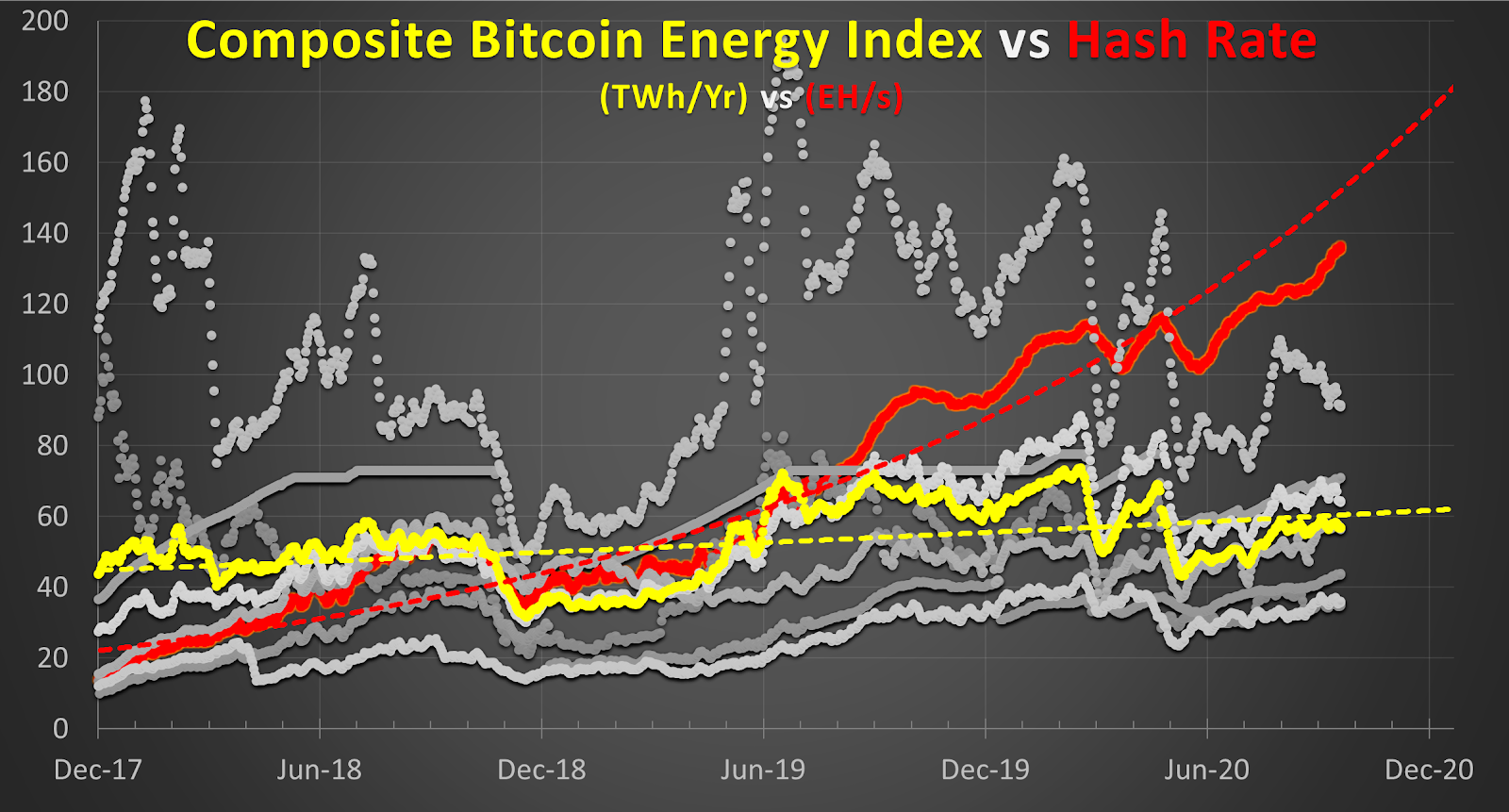 Interestingly, snapshot bitcoin consumption estimations are commonly extrapolated for an entire year, expressed as an energy value in TWh/Year without supporting time data or evidence. Daily network power estimations would be much preferred to all of these yearly energy consumption estimates plotted on a daily chart. The chart crime in this case is the egregious graphical error that makes folks massively misinterpret the data: yearly energy estimates graphed on a daily axis. So, I took the liberty of converting these daily interval estimates into a daily power estimation chart to correct for these above chart errors that force data misinterpretations.

I present the Composite Bitcoin Power Index (CBPI) compiled from the D-BECI and Minimum, the C-BECI Maximum, Minimum and Estimated, as well as our above economics- and physics-based estimates.

This CBPI composite estimates for Bitcoin’s instantaneous electrical usage as expressed in watts, the unit of electrical power. The CBPI peaked recently at nearly 7.58 GW, or about 6 DeLorean time machines at 1.21 Gigawatts (or should I say jigawatts?). 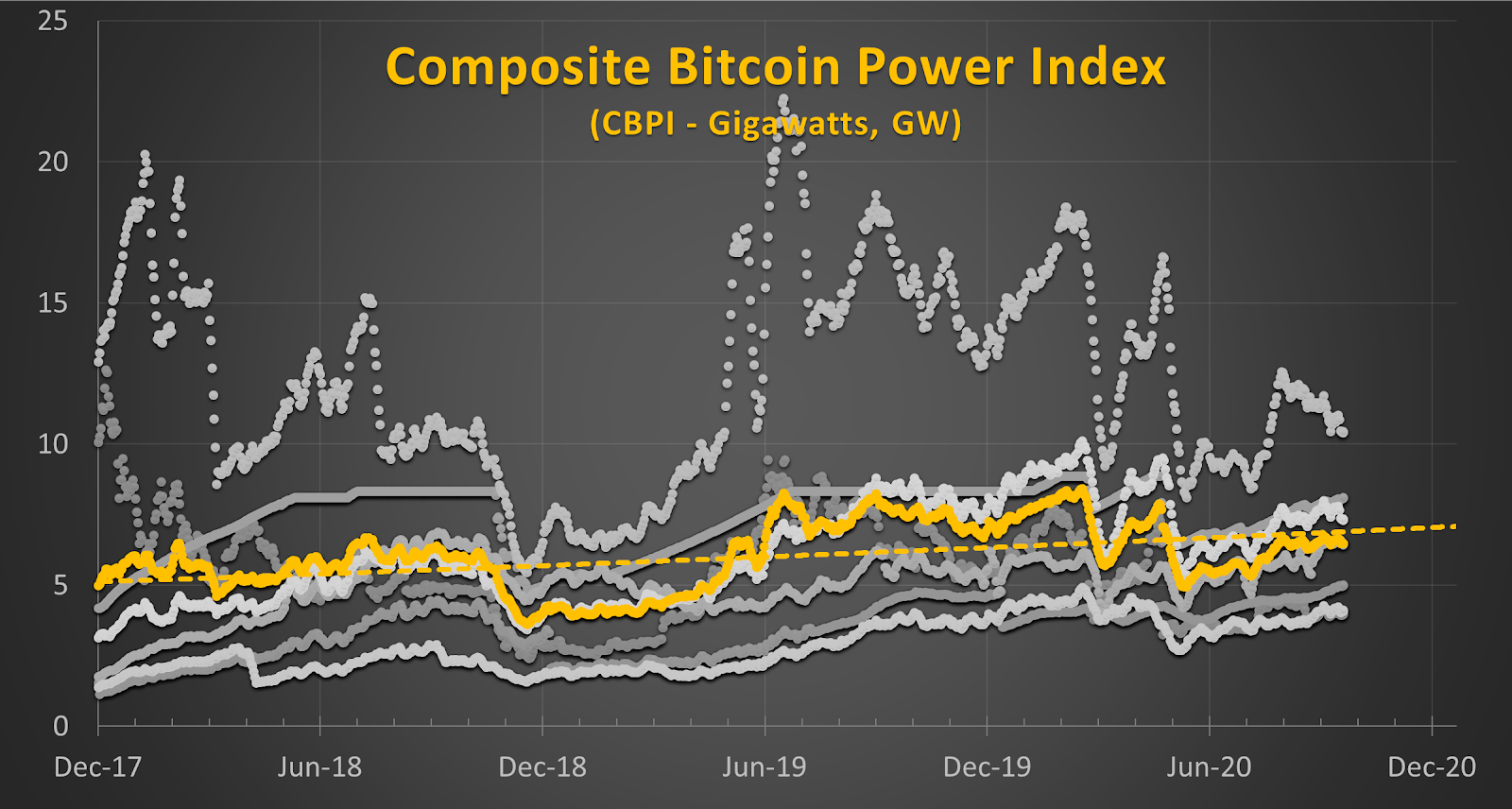 Energy values that large are difficult to digest, especially in a yearly context, so let’s put these estimations in perspective with some quick comparisons:

A comparison of our index to other popular energy usage estimates.

So, Bitcoin energy consumption today is only a very tiny portion of what many consider to be a significant civilization-level problem: ever-increasing human energy consumption. Check out interesting solutions to this problem outlined a century ago by Nikola Tesla. As recently as September 2020, a study claimed that nearly 76 percent of the Bitcoin network is powered by clean energy sources. Also, remember that once Einstein discovered mass-energy equivalence and humanity harnessed the energy embedded in the atom, energy for the advancement of mankind has become materially abundant.