Hodlers are the revolutionaries 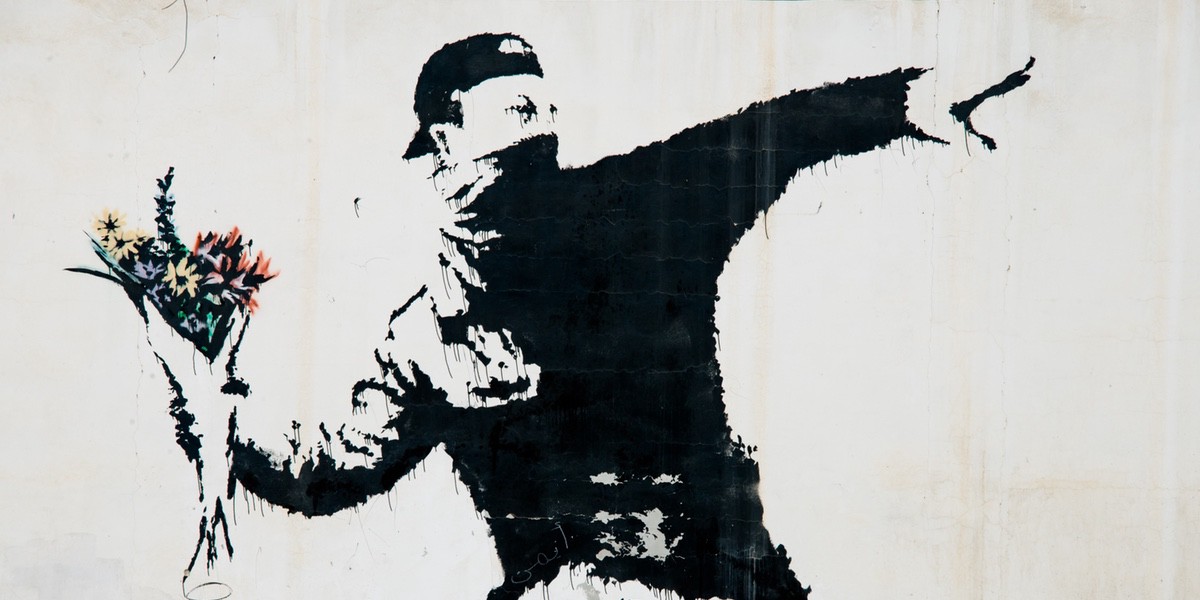 My reflections on the important role hodlers play in developing Bitcoin’s network (and other cryptocurrency networks).

“In the beginning of a change the patriot is a scarce man, and brave, and hated and scorned. When his cause succeeds, the timid join him, for then it costs nothing to be a patriot.”— Mark Twain

Satoshi published the Bitcoin white paper on 10/31/2008, one month after the collapse of Lehman Brothers sent a shockwave through the financial system. Bitcoin was incepted in a time of absolute necessity. Trust had been lost in a world that ran on trust.

“The root problem with conventional currency is all the trust that’s required to make it work. The central bank must be trusted not to debase the currency, but the history of fiat currencies is full of breaches of that trust. Banks must be trusted to hold our money and transfer it electronically, but they lend it out in waves of credit bubbles with barely a fraction in reserve.” — Satoshi Nakamoto

Through intervention by central banks during the financial crisis, markets have become incredibly distorted, with risk/reward the most skewed its ever been in recorded history. Over ~ 9T of bonds trade with negative yield.

What is unique about the current period is that never before in observable history have so many countries had such long periods without sustainable surpluses. For example, the US has now run a deficit for 40 of the last 44 years (including 2012) 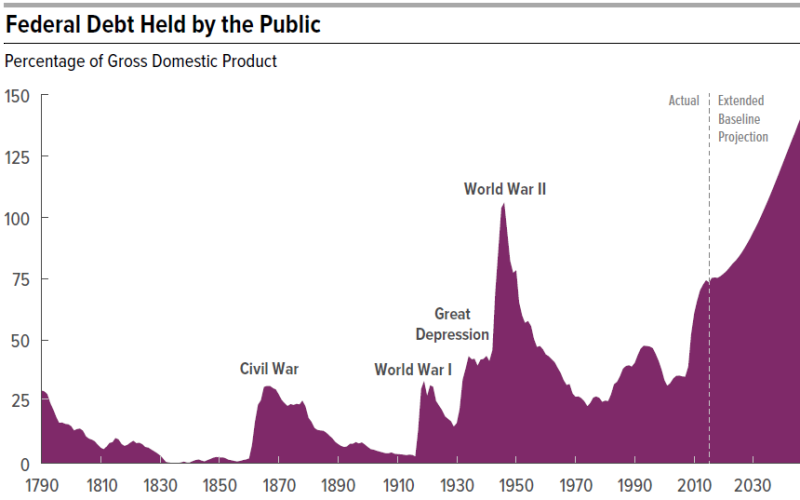 How do you think this plays out?

“Prior to the 20th century, ordinary people could always flee to hard currency (gold) to save themselves from the effects of the failed, inflationist, policies of the central bank. This ended across much of the world in the 20th century as gold was outlawed.” —Vijay Boyapati

Never before in observable history have so many countries been off a precious metal type currency system for so long. Coming off the gold standard in 1971 helped create the conditions for almost unlimited credit and debt creation potential that would have been inconceivable through the annuls of economic history.

“So after 41 years of global fiat currencies and an unparalleled amount of debt that is proving very difficult to shift, we really are venturing into the unknown.” — Jim Reid 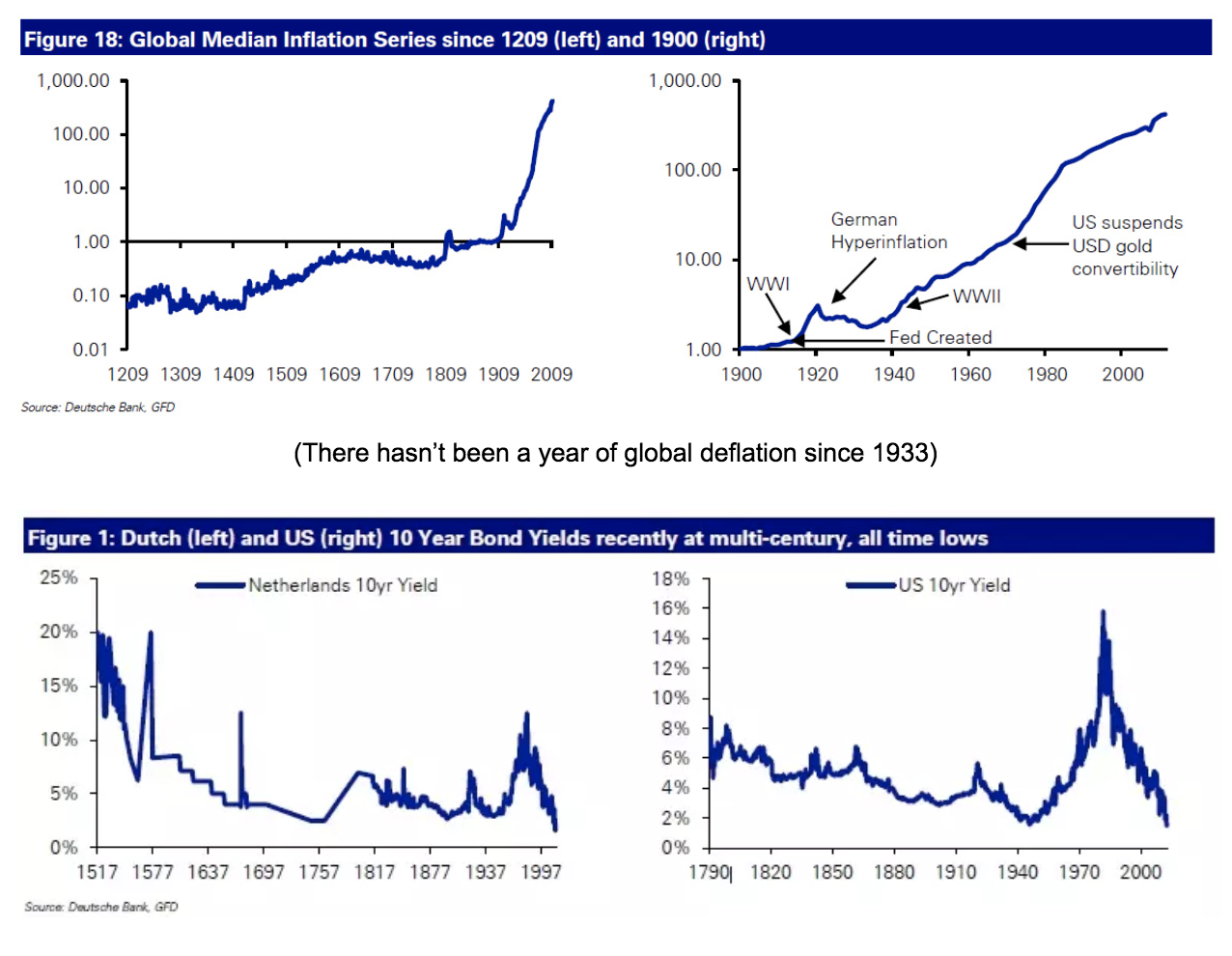 Bitcoin was created to build a new financial system, one that didn’t require trust, which adhered to principles of sound money. And why does sound money matter?

Money is the tool we use to signal consumer preference. By having a targeted and efficient means to relay consumer demand, producers can concentrate efforts towards goods and services the market desires most. Sound money facilitates this. With unsound money, the market loses the ability to relay its demands to producers. This is why socialism/centrally planned economies simply cannot function. The invisible hand mechanism is too profound and powerful to artificially replicate. Sound money is the catalyst to maximize the division of labour through the maximal efficiency of financial communication.

“Over and over again, the financial system was, in some narrow way, discredited…. the rebellion by American youth against the money culture never happened” — Big Short

“In this sense, it’s more typical of a precious metal. Instead of the supply changing to keep the value the same, the supply is predetermined and the value changes. As the number of users grows, the value per coin increases. It has the potential for a positive feedback loop; as users increase, the value goes up, which could attract more users to take advantage of the increasing value.” — Satoshi Nakamoto

Satoshi needed to bootstrap the network with an incentive mechanism — the block reward which (a) controlled currency supply of Bitcoin and (b) created an incentive for people to protect the network.

Early hodlers believed in Bitcoin despite overwhelming negativity and false information (ex: labeled as a currency for money launderers and drug dealers, price fluctuations). Hodlers had stronger risk appetite to weather the volatility of being a first mover. They’re practitioners of skin in the game

“Don’t tell me what you think, show me your portfolio.” — @nntaleb

“Holding bitcoin is the exact opposite of speculation. A trade can be called speculative when the incentives for buying and selling is merely based on market sentiment. You hope to sell the product for profit despite the fact that it did not accrue any intrinsic value for society over the holding period. Holding of money does not have this downside, rather the opposite is true. By holding money you invest in the economy as a whole. Every time you choose to retain money you decrease the available amount in circulation…This leads to the increase of purchasing power per unit of that money. The result is that prices fall and all participants in that economy become wealthier. By holding Bitcoin the price per unit increases. The more people hold Bitcoin in the long run, the more volatility drops towards a gradual increase in price. This convergence towards a stable increase in price makes Bitcoin more attractive to new audiences, creating a feedback loop.”—Willem_VdBergh

“The increase in Bitcoin’s price has corresponding virality. And as it expands, hodling becomes popular with people with a lower risk appetite, pulling in more and more network effect into the Bitcoin black hole” — @robustus

With each of those boom/bust cycles we’ve seen Bitcoin redistributed from old hodlers to new hodlers via selling, decreasing the Gini Coefficient. In 2017 alone, we saw 15% of all BTC move out of old hodler hands. 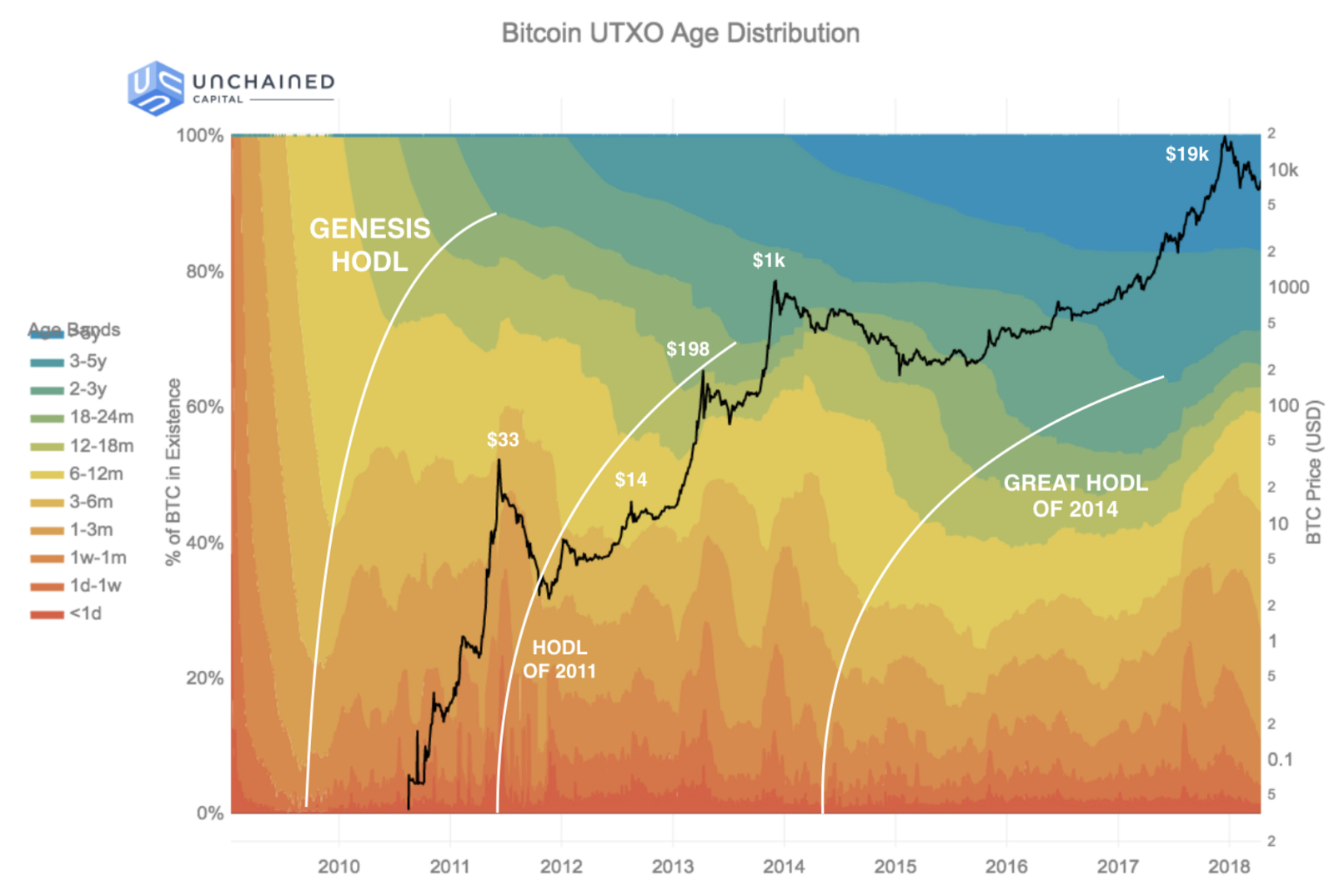 “Slowly, but surely, Bitcoin creeps further and further into the psyche of those in charge “ — Vijay Boyapati

Via the Lindy Effect, the longer Bitcoin remains in existence the greater society’s confidence that it will continue to exist long into the future.

“Protocols die when they run out of believers.” — Naval

The faith in a new financial system is what binds everything together. Bitcoin is not just a software project. It’s a method of coordination for a large group of people who face powerful adversaries. Bitcoin isn’t just a technological breakthrough, it’s also a social one.

“A stable and sustainable ideology must be the foundation of all cryptocurrencies. No amount of cryptography, or consensus protocol development will help a cryptocurrency with an unstable and bankrupt ideology. Stable ideologies allow communities to thrive”. — Kay Kurokawa

Money is a winner-take-all technology, driven by network effects. The crypto with the most hodlers, therefore, is the most demanded by consumers and will be the ultimate winner.

” Bitcoin is digital gold in the eyes of [Hodlers]. To some extent this group already operates on a Bitcoin Standard: investments are evaluated on their ability to yield a return in Bitcoin.” @ TuurDemeester

By owning Bitcoin, you become the central bank, the backbone of the financial system. Hodling isn’t about finding another buyer at a higher price someday in the future, if hyperbitcoinization occurs you’ll never have to sell.

Bitcoin promises an alternative for citizens across the world to keep their savings in a form of money that can neither be confiscated nor diluted. If Bitcoin grows much larger, it may force governments to become a voluntary organization. Through hodling we may finally be free.

Those who opt-in to Bitcoin (the red pill), are trading something abundant for something scarce, trading the past for the future, trading financial dependence for financial sovereignty.

Dawn of Bitcoin from Dan Held on Vimeo.