The Most Exciting Investment of the Century

Software is eating the world and money is no different.

Bitcoin is the best performing asset of the decade. It is uncorrelated to other asset classes, and it is still underpriced relative to the likelihood it becomes a widely adopted store of value.

In 2018, crypto asset prices crashed and for good reason. 2017 saw a meteoric rise in prices and extreme irrational exuberance. The euphoria was followed by a much-needed return to rational pricing. But don’t let the bubble scare you. It’s important to understand the motivation behind Bitcoin and why it represents a historic investment opportunity and a step toward greater self-sovereignty.

Following the global financial crisis in 2008, central banks launched Quantitative Easing to fuel economic expansion, or more accurately, forestall a massive and global recession. The tradeoff – economies became dependent on cheap money. Bitcoin emerged on the eve of this experiment.

With about $184 trillion in global debt, central banks, in particular the Federal Reserve, attempted to tighten monetary policies in 2018, but due to concerns of slower than forecasted economic growth, they have since reversed course. QE is back. The 2019 U.S. budget deficit has now passed an eye-popping $1 trillion. If you were writing the script for a non-sovereign, fixed-supply, digital form of money to gain mass adoption, this is how you would write it. With massive debt looming and monetary policy front-and-center, it is becoming clearer that we need other options.

The good news is that institutional infrastructure is being built to transition our monetary system to the digital age. It is still early, but there are strong efforts underway. Fidelity launched their Bitcoin custody services, the Intercontinental Exchange (ICE) launched physically settled futures contracts for Bitcoin, and endowments and pensions are exploring the best way to gain exposure. The IMF is also taking serious notice.

Instead of adopting the currency of another country—such as the U.S. dollar—some of these economies might see a growing use of virtual currencies. Call it dollarization 2.0. So in many ways, virtual currencies might just give existing currencies and monetary policy a run for their money. The best response by central bankers is to continue running effective monetary policy, while being open to fresh ideas and new demands, as economies evolve. – Christine Lagarde, IMF Managing Director, 2017

One way to think about an investment in non-sovereign, digital money is as a put option on dominant fiat currencies. In the 1990’s it was impossible to imagine that the internet would replace newspapers, TV, and retail stores, among other things. Similarly, today it is difficult to imagine a crypto asset becoming the basis of a global monetary standard. But how farfetched is the idea, really?

Software is eating the world and paper money is next on the menu. The specific outcome is less important than recognizing this paradigm shift. Public blockchains enable ownership and transfer of fully digital assets without a trusted intermediary for the first time. This is revolutionary.

As most things have gone from analog to digital, why would sovereign currencies be immune from this transition? The force of technology is unstoppable.

For over 5000 years humans converged on gold as the global monetary standard for good reason. Sure, it was viewed as beautiful, but more importantly, gold has been resistant to rampant supply inflation. It has maintained its purchasing power throughout history.

Where gold has failed is in its transportability and verifiability. It’s hard to transport gold. This is an important issue in an increasingly global economy. Gold is also hard to verify with certainty. The very existence of gold reserves is often taken on faith. We are required to believe in systems and organizations that have been established to take care of us and our money. This faith has given power to central banks to print money, backed by a sovereign government. This works well enough as long as nations are economically prosperous. But there are many recent examples of catastrophic hyperinflation that renders the currency worthless. Look no further than the current media headlines covering Venezuela, Turkey, and Iran. Their currencies are circling the drain.

As sovereign currencies go, the US dollar is a relatively stable money; it’s the de facto global reserve. It’s our best bad idea. However, it is important to note that it’s only been 48 years since the US abandoned the gold standard… The free-floating USD hasn’t been battle tested.

There is no example of a fiat currency ever holding its value. The British Pound Sterling is the oldest survivor at 317 years. The British Pound was originally defined as 12 ounces of silver. Today it is only worth .5% of its original value. The burden of proof is on current monetary regimes and it’s not looking good.

Consider the chart below. Since 1969 the annualized compounded supply of USD has increased at 9% a year. This equates to a doubling of US dollar supply every 8 years. By this metric, the US dollar is a poor store of wealth. Additionally, and as a historical rule, if a money’s supply can be increased, it will be increased. Salt, Rai stones, copper, sea shells, and numerous examples of government-issued monies have fallen victim. 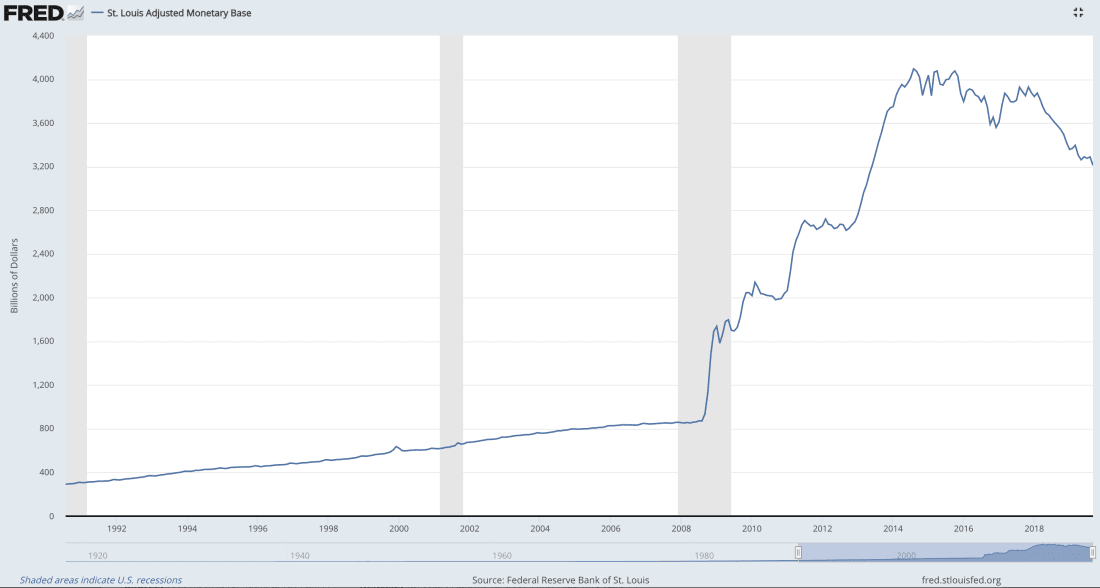 Bitcoin is still a speculative vehicle today, but it picks up where gold left off. It is incredibly inflation resistant; there will never be more than 21 million. It also succeeds where gold failed. It’s easily transportable; we can send a million dollars of BTC around the world for $.10. It is also easily verifiable; sharing a public key allows full transparency of the balance in a digital wallet.

There is a good chance that Bitcoin or another emergent crypto asset will become the global monetary standard. One way to quantify the market opportunity is by estimating Total Address Market (TAM). To that end, note the following:

It will increasingly be viewed as responsible and prudent to hold some wealth in crypto assets as a hedge against fiat monies. This portfolio adjustment also mitigates the risk that one’s wealth will be devalued relative to a new global monetary standard.

Booms and busts will be a natural part of global adoption. Prices will continue to be volatile - likely an order of magnitude more volatile than developed market public equities. But with each boom and bust, confidence in digital currencies grows as they prove their anti-fragility and refuse to die.

There are a lot of obstacles ahead, but the possibility of a new global monetary standard presents an amazing step for individual sovereignty and an incredible investment opportunity.

Paper is poverty. It is only the ghost of money, and not money itself. – Thomas Jefferson to Edward Carrington, 1788