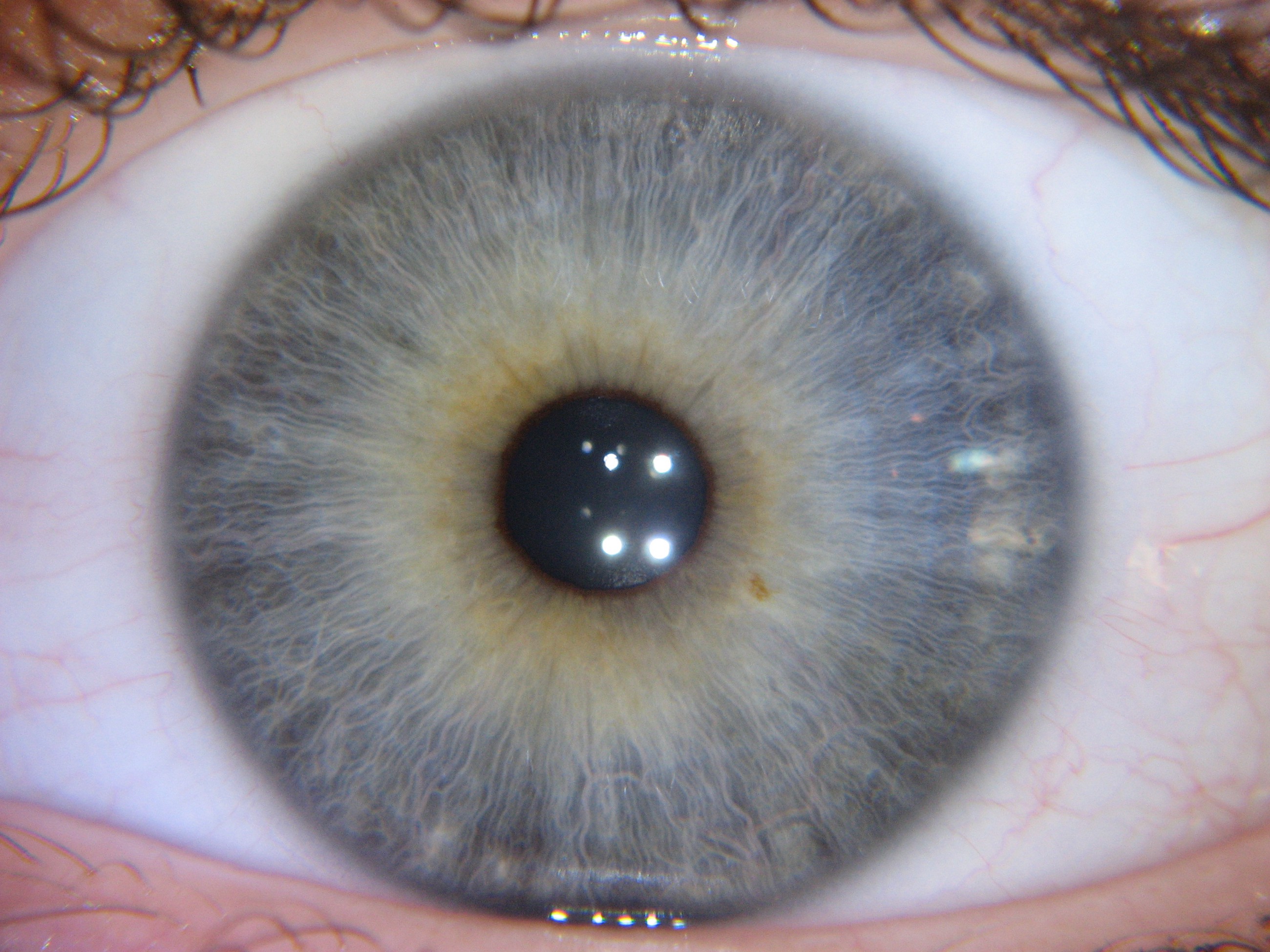 We read from the reliable Vortex that a Bitcoin company has been working on surveillance tools that they’ve now launched.

It appears that many people in Bitcoin don’t understand several aspects of the future and past of money and its effects, so let’s go through some of them now, to put this very curious news into context.

In Crawfurd v The Royal Bankthe court held that money in circulation that had been previously stolen but subsequently used legitimately could not be returned to its original owner, even if that owner could prove the notes were his before any subsequent holder. The utility of money was held to be of greater importance to society than restitution of stolen goods, and should the money be returned to the victim of theft it…

“would be to render the Notes absolutely useless, and consequently would in a great Measure deprive the Nation of the Benefit of the Banks, which could hardly subsist without the Circulation of their Notes”

Obviously this historic and important case and principle is directly transposable to Bitcoin today. I will now explain why this is the case, after which you will see why Bitcoin Surveillance is not only an unethical thing, but a dead end on a hiding to nothing. Every Bitcoin, for all intents and purposes, has a serial number attached to it, that can be followed on the public block chain. 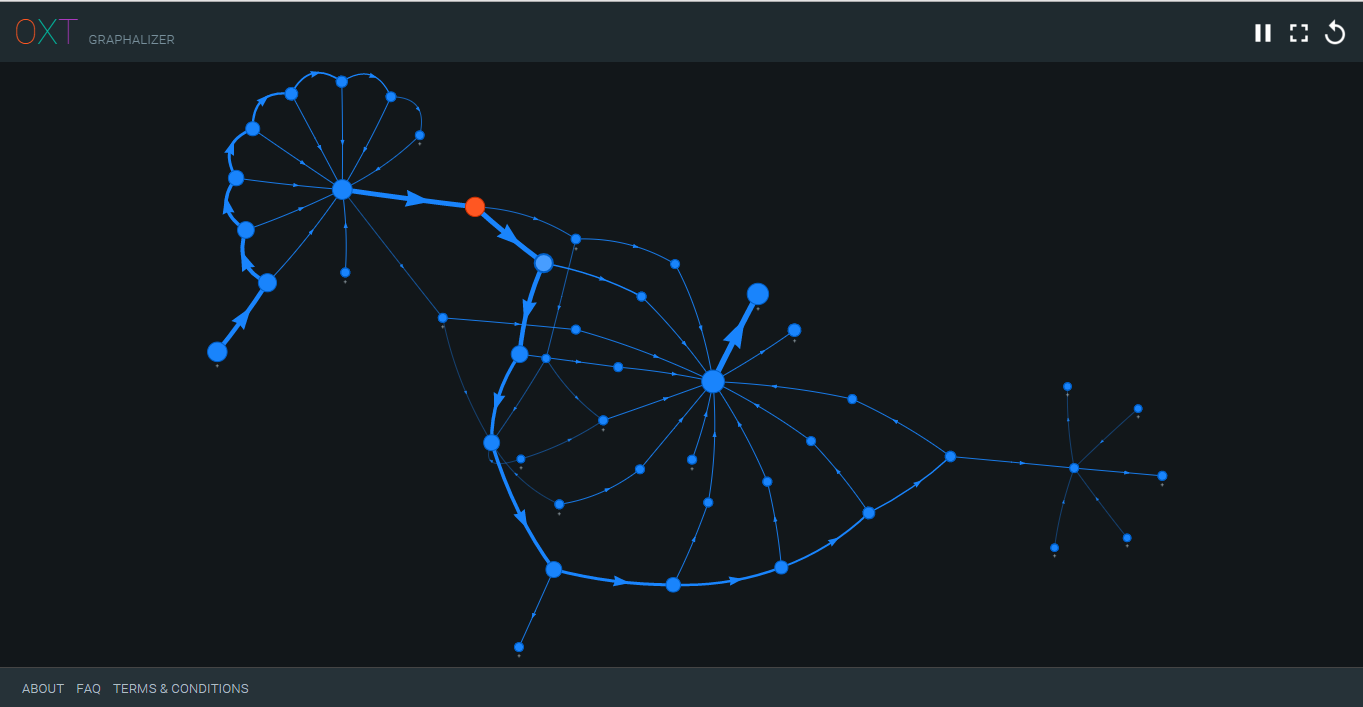 A graph showing Bitcoin connections on the OXT site.

Each one of the blue circles on the graph above represents a person, and a Bitcoin transaction on the block chain between two or more parties. If you know what any purchase was for, and who made it, you can trace where those coins go in the future if they move. What this company and others are doing is providing a tool that correlates information on the block chain to people and purchases, scoring and marking each one. This is nothing less than a direct attack on Bitcoin’s fungibility…

In order for money to be useful, each piece of it has to be interchangeable with any other piece. This is what the court held in _Crawfurd v The Royal Bank. _If all Bitcoin is not equal, then Bitcoin’s fungibility is damaged. Obviously it makes no sense for a Bitcoin company to damage the fungibility of the thing it is trading in; this hurts the price (and perception) of Bitcoin and makes it less useful. This causes the rational actor to ask, “Who is really behind such an insane policy, that any Bitcoin company surely must know will damage their business?” This quote may provide the answer…

From a Coindesk Magazine report on Bitfury’s Survillance tool

If there were such a thing as a “Conspiracy Theorist”, the fact that a former White House deputy press secretary is working at BitFury, where fungibility damaging software has been developed and released, would be a red flag. What better way to destroy Bitcoin than to infiltrate Bitcoin companies and convince them to build tools that insert a layer of mistrust on top of all transactions, burdening business and spreading the contagion of suspicion throughout the network and community? Merchants would be reluctant to take Bitcoin, lest they find themselves burdened with “Dirty Coins” that they can’t convert back to fiat or use in onward transactions. This would effectively put brakes and dampeners on Bitcoin’s spread through society, and the Bitcoiners themselves would be the ones doing it, at no cost to the conspirators! From this speculative, Conspiracy Theoretic perspective, several Bitcoin companies have been infiltrated in exactly this manner, probably completely innocently; the business owners being duped into believing that if they hire an ex-government insider, that they will get some form of immunity and be left alone to innovate. But that is another Conspiracy Theory, obviously. Even without Conspiracy Theories, it is a fact that people from the ex USSR “Satellite States” are still suffering from the brainwashing and momentum of that evil system, that tortured and corrupted them for over seventy years. Eastern Europeans are far more likely to be reflexively accepting of Bitcoin Surveillance, and Statist nonsense, and there are other companies from ex USSR states that are making surveillance their business model. It’s important to bear in mind that what is illegal in an ex USSR satellite state may not be illegal in the USA. Someone in the Czech Republic may mark a Bitcoin with a red flag because it was used for a purchase of a book (for example) that is entirely legal in the USA with its guaranteed rights. The only way around this would be to insert meta data on each transaction so that red flagged Bitcoin was tagged, “ILLEGAL BOOK PURCHASE IN CZECH REPUBLIC: RED FLAG” and US users being able to ignore all “criminal” activity marked in ex USSR countries as “NOT OUR PROBLEM IVAN”. It would mean that Bitcoin could have many flags on it, from different jurisdictions, accumulated over time.

An Infinite Well of Taint

Remember that the supply of Bitcoin is strictly limited, and it is never destroyed, unlike fiat, which is recycled as it is worn out, decommissioning the unique serial numbers that are never re-used. 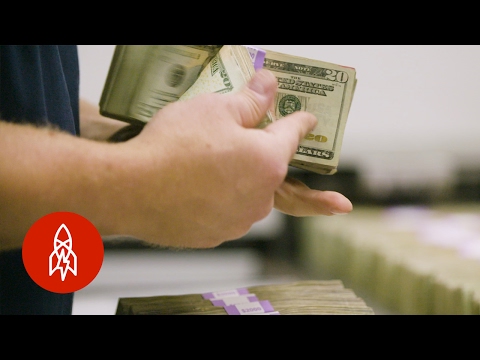 Bitcoin never wears out, ever. That means that by the time the last block is mined, each Bitcoin in circulation could have literally billions of flags attached to it, and Bitcoin consolidated with coin management tools to optimize wallets would accumulate all the flags of all transactions made with its parts, further compounding the number of flags on every Bitcoin in any wallet. And the opposite of Bitcoin consolidation exacerbates the problem exponentially. Consider this Bitcoin transaction graph… 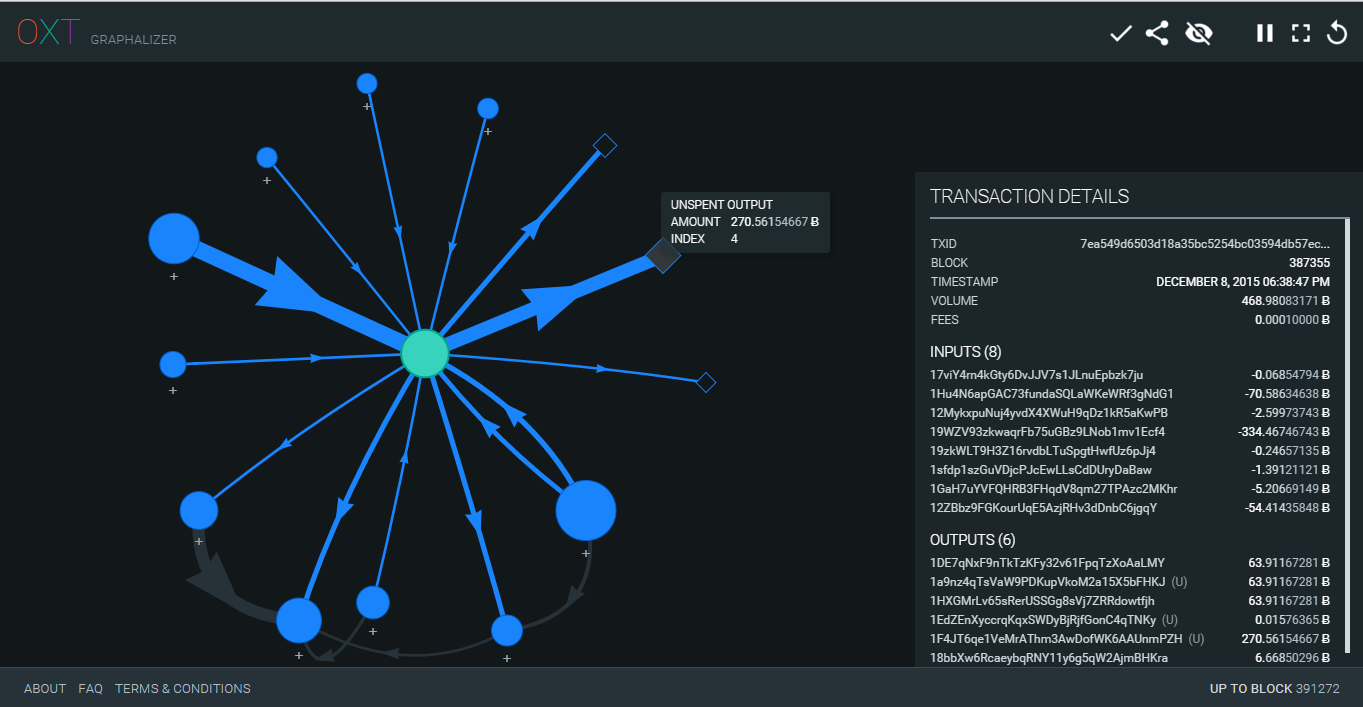 A Bitcoin transaction graph from OXT

Lets say that the green dot in the centre was used to buy a book that is banned in the Czech Republic. BitFury would mark that Bitcoin as “tainted”. Six transactions are going out from the centre; that means six addresses are now tainted by the original transaction, and must also be marked red as “Bad Coins”. It doesn’t take much imagination to see what comes next. The taint will quickly spread throughout the network until there are no Bitcoin left that do not have some sort of taint… 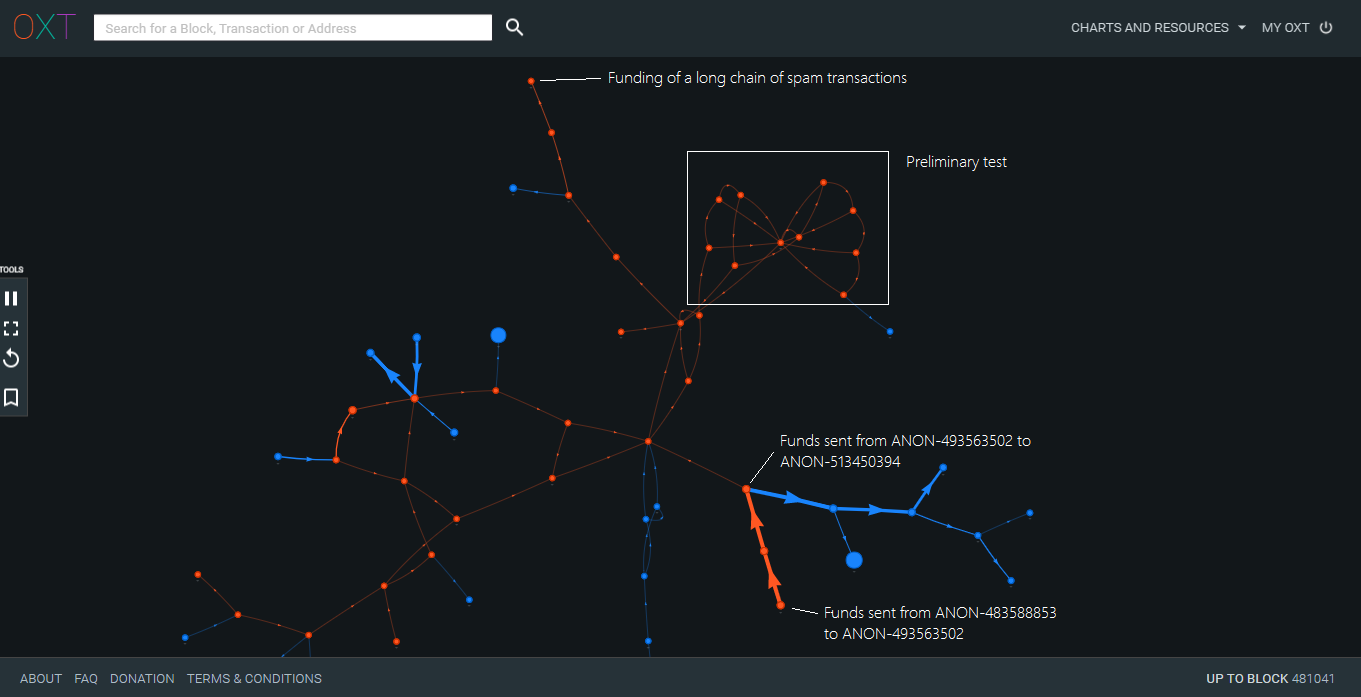 Eventually, every Bitcoin will be tainted. And if no one is allowed or is simply frightened to accept tainted Bitcoin, the entire system will collapse forever. This must be the “MUAHAHAHAHA” crazy thinking of the Statists who mistakenly believe this plan will be enough to slow down or even kill Bitcoin forever. 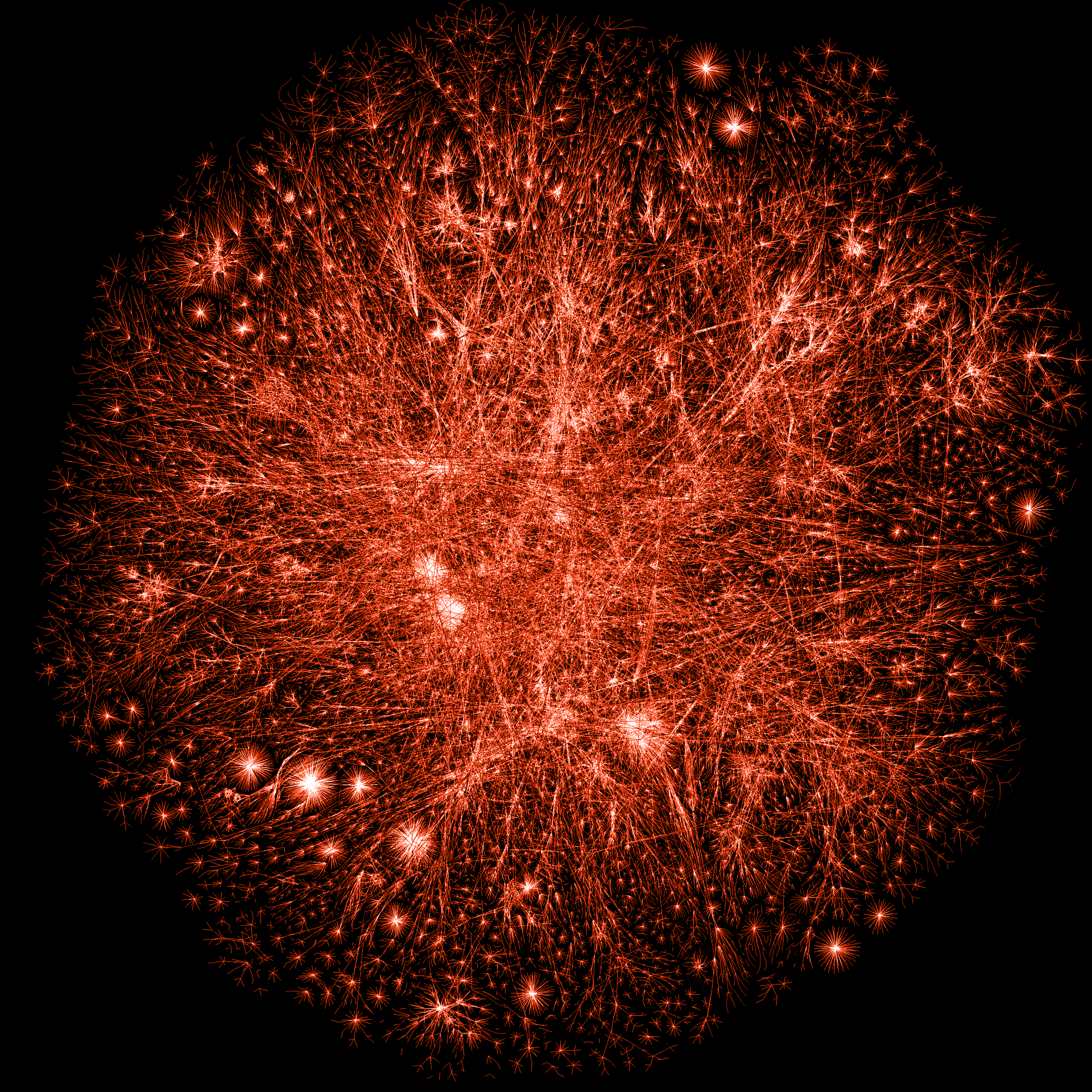 These facts alone make the idea of marking Bitcoin with flags totally and absolutely unworkable. The only way around it is if flags expired, with a Statute of Limitations trigger. But this would defeat the purpose of marking the money, which is to exclude it from circulation forever. Obviously this idea has come from the mind of a nocoiner and anti-Bitcoiner, who has absolutely no clue about how Bitcoin works, and no idea of what its nature is or the law. With one paragraph and a few images this idea is exposed for the farcical garbage that it is; the fever dream creation of an ignorant short-term thinker with no imagination or idea of the history of bank notes and their use in crime. No matter what these people do, they cannot possibly win.

This type of absurd, anti-Bitcoin behaviour will not last long, and will not have long lasting effects on Bitcoin. As I describe above, all Bitcoin will eventually become tainted in some way, and in fact, it will be the most tainted money in history because it is never destroyed. Furthermore, improvements to the Bitcoin protocol will make anonymity the default across the entire network, permanently blinding all anti-Bitcoin actors and killing their business models forever. Whether they succeed in marking all coins or are prevented, Bitcoin must eventually become super saturated with taint. This is not because Bitcoin is bad, but it is because man is bad, and he does bad things, and will never stop until the world ends. Bitcoin will survive these absurd and infantile attacks on its fungibility. What will not survive are the reputations of the very sad and misguided, anti-Bitcoin characters who are introducing these toxic tools to the world. History will look on them with total disdain, and their names, and the names of their companies will be a curse in the mouths of every Bitcoiner today. We are beginning to see this happen right now. So sad!

If you like the content and feel so obliged to send some love via BTC donations you can do so at the address below:↴ 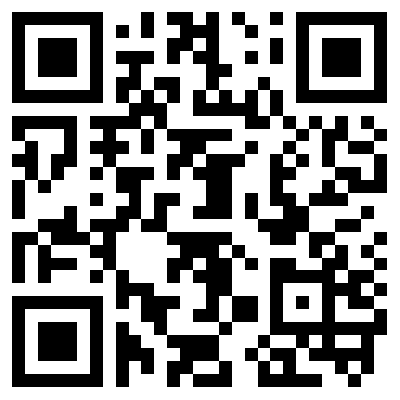