The Intrinsic Value of Bitcoin as Determined by Energy Spent

This begs the question:

Can the fundamental value of Bitcoin be accounted for by raw energy alone?

A Fair Value for Bitcoin

Bitcoin’s fair value is a function of energy input, supply growth rate and a constant representing the fiat dollar value of energy.

These variables can be combined into the following equation, termed Bitcoin’s Energy Value (V):

As all units of hash rate and supply rate cancel out, this equation suggests that the fair value of Bitcoin (V) can be represented as a function of the Joules of energy spent to produce it:

The Energy Value Formula: Bitcoin’s fair value is a function of Joules

To test the theory all input data, except for mining Energy Efficiency, was sourced from Blockchain.info.

The challenging piece of the puzzle is obtaining a good estimate for Bitcoin’s Energy Efficiency through time.

The power required to fuel Bitcoin mining is driven by two parts, the hash rate to solve the SHA-256 algorithm and the energy efficiency of the mining hardware itself. In its early years, Bitcoin was mined on very electrically inefficient CPUs and GPUs.

The current era ASICs have energy efficiencies over 100,000 times greater than the average Bitcoin mining hardware of 2009. This means that a higher relative portion of the average miner’s electrical bill today is efficiently converted into hashing power.

To estimate a historic profile of Bitcoin mining hardware Energy Efficiency, the efficiency rates for 150 Bitcoin hardware models from Cambridge (ASICs only), BitcoinWiki (FPGAs) and Bitcoin.it (ASICs, CPUs and GPUs) were collated. All ASICs, FPGAs and Intel, AMD and Nvidia hardware were considered where Energy Efficiency (J/GH) was provided and where an estimated hardware release date was found. Common models were grouped and the average energy efficiency for that model calculated on an equal weight basis.

Finally, a 1 month moving average of Energy Efficiency was calculated to allow for the phase-in and phase-out of model types.

In reality, some hardware models had wider usage and some longer lifespans. However, at risk of increasing the historical error in the Energy Value model and in attempt to produce an unbiased outcome, no other hardware exclusion logic, data cleansing or data manipulation was conducted. 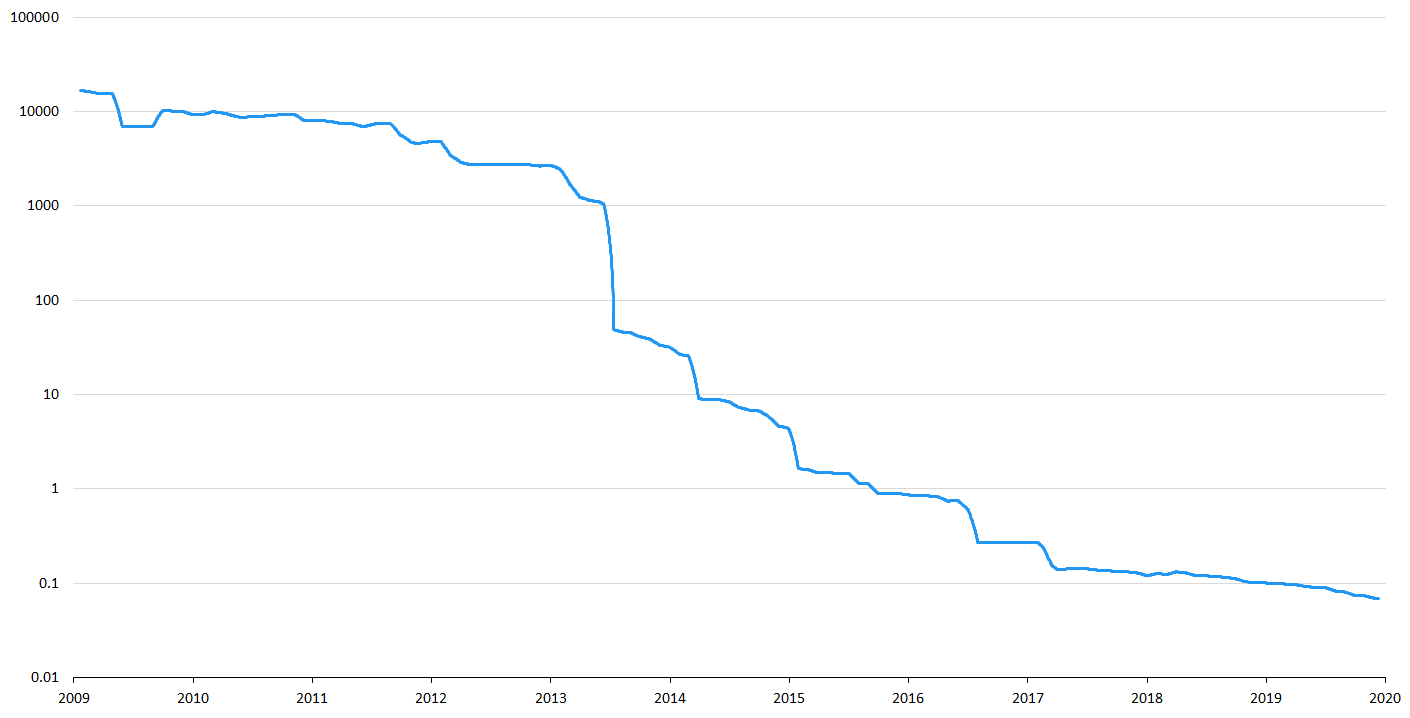 The S-curve of increasing Bitcoin Energy Efficiency (represented by a falling J/GH over time). Note the sharp increase in efficiency from the introduction of ASICs through 2013 and 2014.

The Fiat Factor is a necessary constant to convert the units of energy input (Joules) to fiat currency US Dollars. It is simply a representation of how much “we” value energy.

Based on the Energy Efficiency profile above, the resulting Fiat Factor is:

The Fiat Factor value is dependent on the accuracy of the Energy Efficiency profile and therefore the value provided here should be considered a close estimate. In the long term, a declining US Dollar, hyperinflation or fiat currency collapse would result in the Fiat Factor increasing in a 1-for-1 relative manner.

Plotting the result shows a visually strong fit for the Bitcoin Energy Value to historic price.

The plunge in Bitcoin’s energy value in 2013/14 is largely driven by the transition from GPU/FPGA to ASIC hardware. While it is likely there was a substantial drop during this period, it may be somewhat exaggerated here due to the hardware usage and depreciation model assumptions outlined above.

The first question is, does a Bitcoin Energy Value make logical sense?

In “Modeling Bitcoin’s Value with Scarcity”, Plan B found a strong relationship between market price and the scarcity of Bitcoin and other hard assets. We can posit that this represents the fundamental relationship of human “demand” for hard, value preserving assets over time.

But there’s a catch.

Not all scarce assets have nor preserve wide-spread market value. For example, there are approximately 3,000 cryptocurrencies with market caps under $500. Many of these coins have “constrained” supply models, but they have been assessed by the market as having no fundamental value. Scarce, but not valuable. The same can be said for bad art, bananas stuck to walls and many other rare and unique throw-away assets. This makes sense, as scarce assets which are easy to acquire or replicate typically have low market value.

When Energy is dedicated to a task, the supplier of energy (the worker) expects there to be a demand for their effort. When a supplier sees growing demand for the fruits of their labour, they will work harder in attempt to reap greater benefits. Others will likely also contribute to capture some reward. However, should demand for a supplier’s labour fall, or should the opportunity decline to a point at which they can achieve a better return elsewhere, the supplier will likely cease committing energy to that task.

Consistent energy input represents a balance between supply and demand. Rising market prices incentivize increased energy input via hash power growth and technology improvements which result in greater energy efficiencies. For this reason, great increases in market price typically result in long-term increases in committed energy and therefore increases in Bitcoin’s Energy Value. However, when speculation causes skyrocketing prices, without a corresponding increase in energy input, price has historically collapsed back to the Energy Value.

It is mean reverting phenomenon. As would be expected with any intrinsic value estimate driven from fundamentals.

Bitcoin’s price and Energy Value tend towards each other, they are like magnets. While deviations between the two can and do exist, they have always closed. Despite being mathematically independent to Bitcoin’s trading price and volume, Energy Value is connected by the invisible hand of the market.

With consideration of the above, an 80% R2 is considered a strong result for the Energy Value. 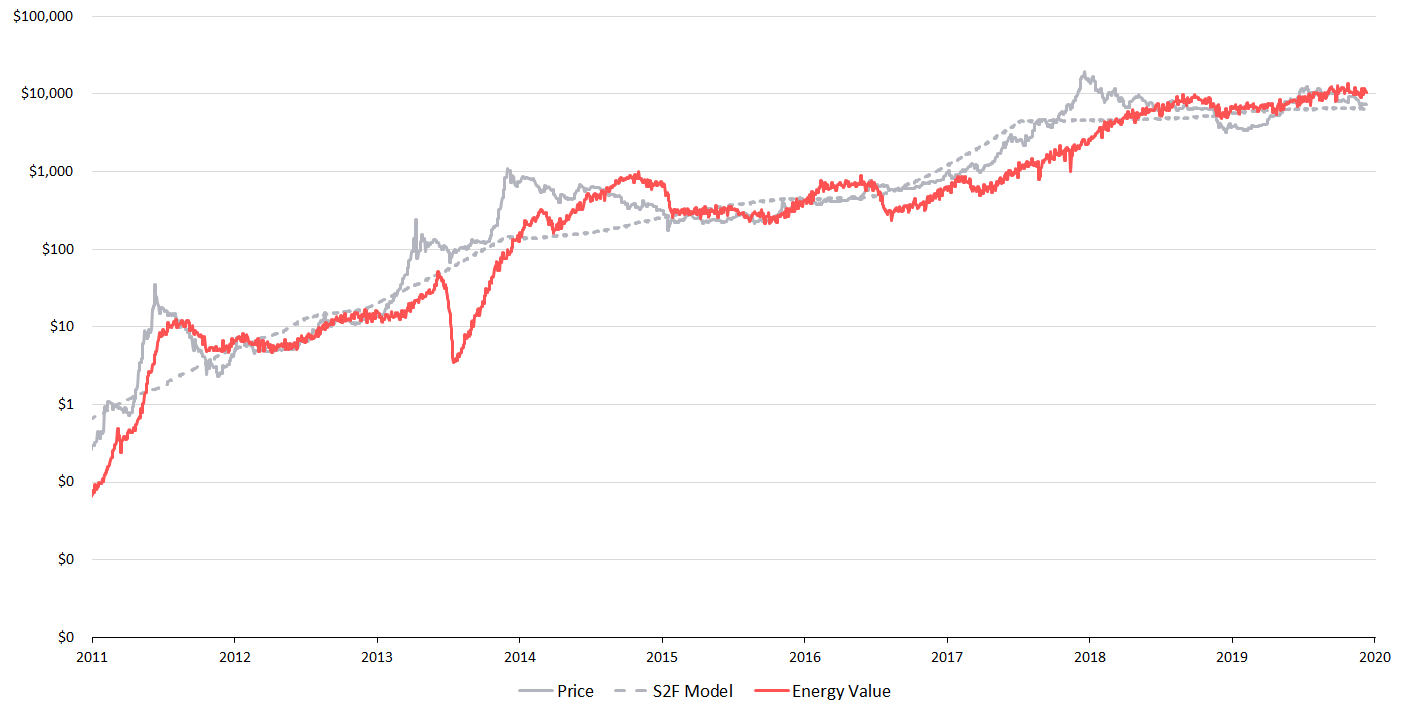 From the above figure we can see that turning points and wide gaps between Bitcoin’s price and the fair value can signify great times to buy and sell Bitcoin.

The Energy Value formula says that Bitcoin has a fair value of approximately $11,500 today (12 December 2019), 50% higher than the current trading price.

This suggests Bitcoin has a great risk-reward in early December 2019. A positive picture is also presented when looking at the below Energy Value Oscillator.

However, energy input can fall at any time.

By considering energy and supply growth, we have found an intrinsic link between Bitcoin’s price and its value.

The value of Bitcoin is a function of its energy input in Joules.

Following are some of the implications of the Energy Value formula:

If Bitcoin is successfully mass adopted as a store of wealth and/or global currency we may have financial market evidence that value is intrinsically linked to effort, the Joules of energy spent in work.

Just as mass can be represented by energy, so can Bitcoin’s Price.

All data and calculations behind this article is freely available to support validation & potential refinement here.