Critics of Bitcoin are quick to point out that bitcoin uses as much energy as small countries, hence unsustainable at world scale. in truth, Bitcoin may be our best tool for saving planet earth - Dr. C 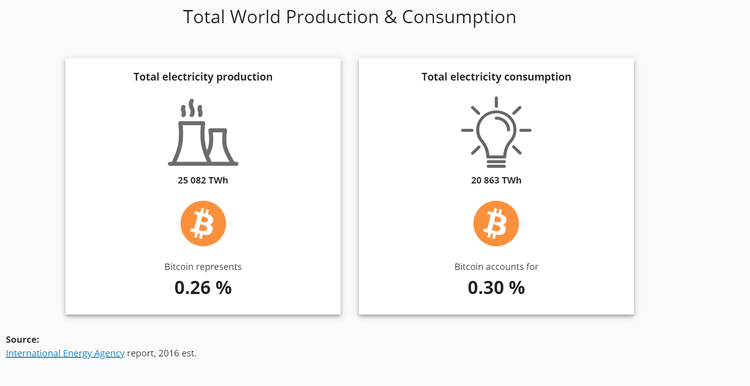 As of July 2019, Bitcoin consumes 0.30% of Earth’s electricity. Wait until we get Dyson spheres.

Bitcoin quickly moving up the ranks.

Some of you might disagree that climate change is real, but this article assumes that intervention is necessary to curtail the destruction of Mother Earth. Resist the temptation to vilify Bitcoin’s energy consumption - allow me to make a case in favour of Bitcoin’s energy use.

“Bitcoin uses too much energy”

Clearly, Bitcoin is useful to some people. Judgments about whether or not something is wasted is best left to those using it. We don’t end up with a good society if we start deciding for other people what is useful and what is not.

To people who value a censorship-resistant, neutral, globally accessible, completely decentralisedsystem of currency with no geopolitical attachments, Bitcoin is a _very_useful application. Some argue it is the _most_useful application of the 21st century.

The energy in Bitcoin is not wasted - it’s used to make the network secure without central authority. No one has demonstrated at scale an alternative.

The Nirvana fallacy - comparing Bitcoin to something perfect

If this world produced all energy from renewable resources, and all energy is used for useful things, then perhaps we may look at Bitcoin and ask whether or not the value of Bitcoin is commensurate to the energy we are using. None of the critics considered what energy is being used for today, and how Bitcoin fares in comparison.

1.) Bitcoin’s annual energy use (64.63 TWh as of July 2019) is less than the annual energy expenditure for gold mining (138.9 TWh). Gold was/is integral to the monetary system that Bitcoin is directly trying to replace. There are also environmental costs of mining gold - from sulphuric acid leeching into rivers, denuding hills, destroying mountains, etc. A tiny fraction is being used for industrial use, the vast majority of gold is being held as store of value. 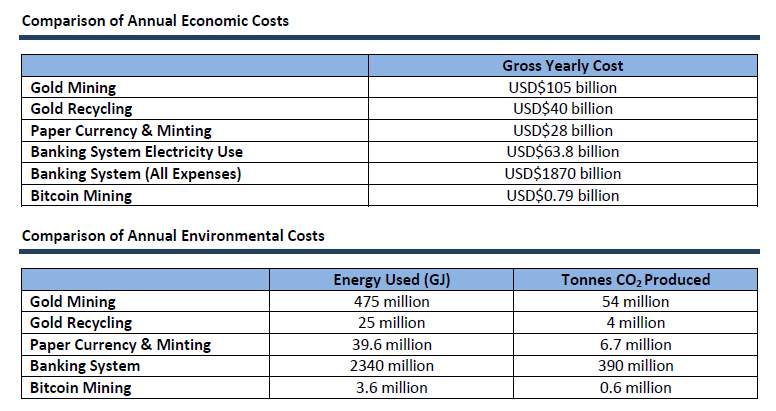 2.) Let’s take a look at things like Christmas lights. The electricity use of Bitcoin for a month (5.38 TWh as of July 2019) is less than the electricity being used to power Christmas lights in the US alone (6.63 TWh). There are additional effects such as light pollution, and the majority does not come from renewable resources. You can argue about the pointlessness of such tradition. 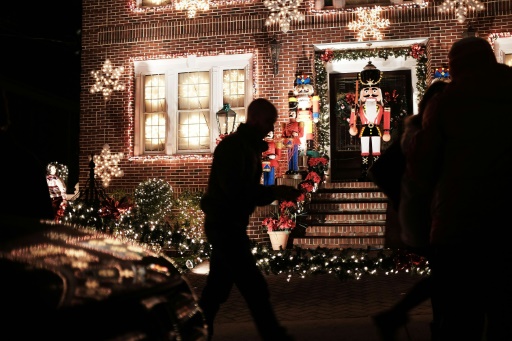 I’m still in favour of Christmas.

3.) More practically, every charging device with a step-down converter sits plugged in and coverts electricity to heat. The estimated power this consumes (1375 TWh in US alone) is an order of magnitude greater than what Bitcoin consumes. This is a worldwide phenomenon that drains an enormous amount of energy. 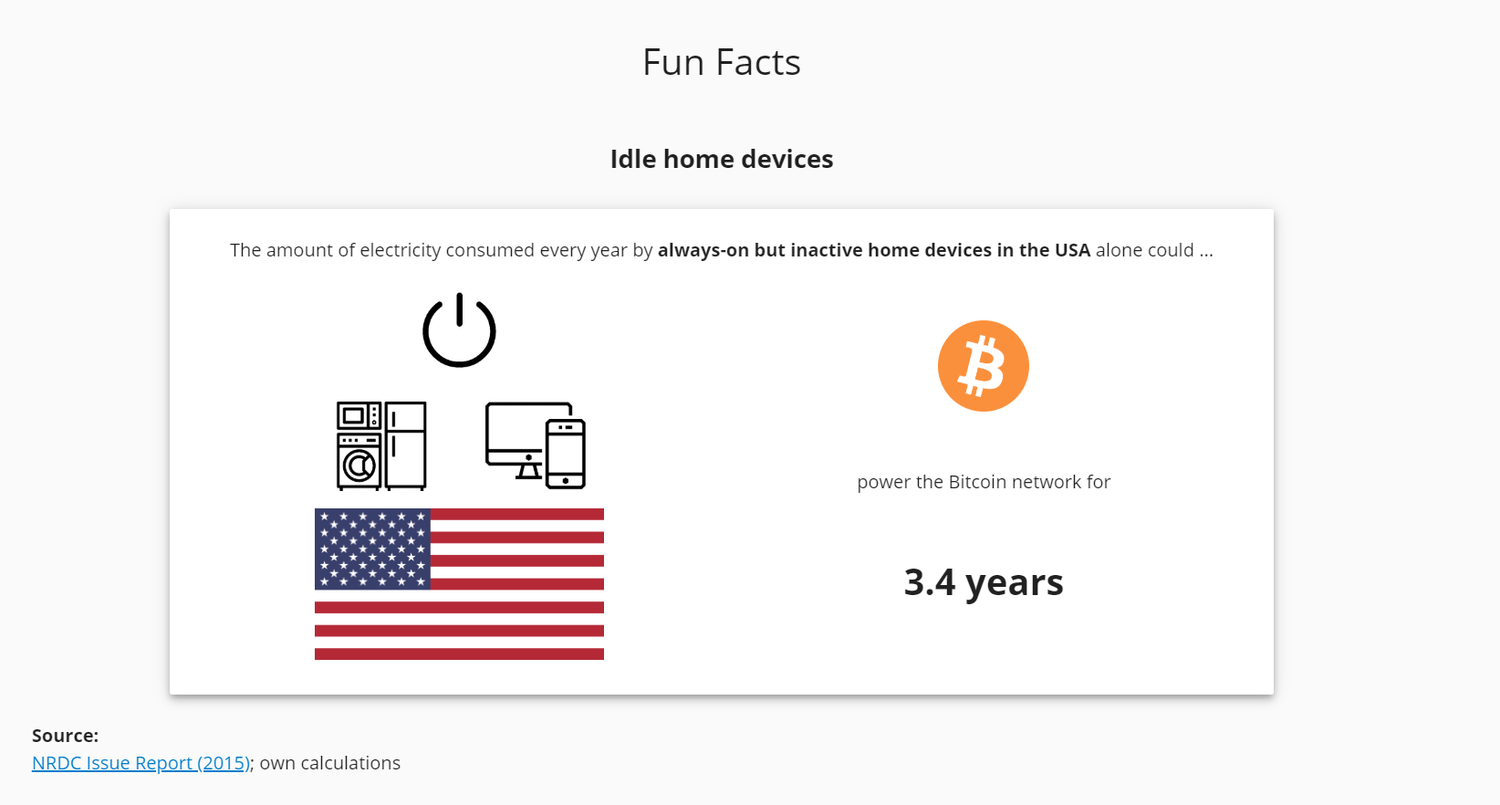 4.) We haven’t even discussed the amount of energy required to support the existing banking system (639 TWh). When you use your VISA card, you do not see the 600,000 employees who commute to work using gasoline-burning cars, the 26-story buildings which are lit 24 hours a day, data centers which are doing fraud prevention and analytics, as well as selling data to intelligence agencies and advertisers. All of this costs a lot of money and energy, and arguably just as “wasteful,” but it’s a hidden cost.

5.) Cherry on top: the world’s largest polluters and energy spenders are military; the main purpose they serve is to kill people. State-sponsored warfare is enabled by the union of Money and State. The debasement of money is a tool for governments to engage in long, brutal wars. We have historical precedence of this phenomena: 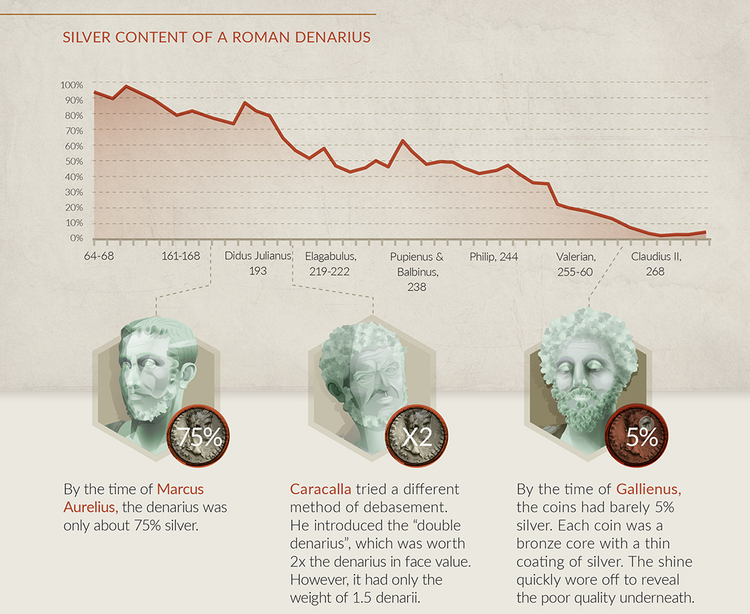 The road to serfdom. 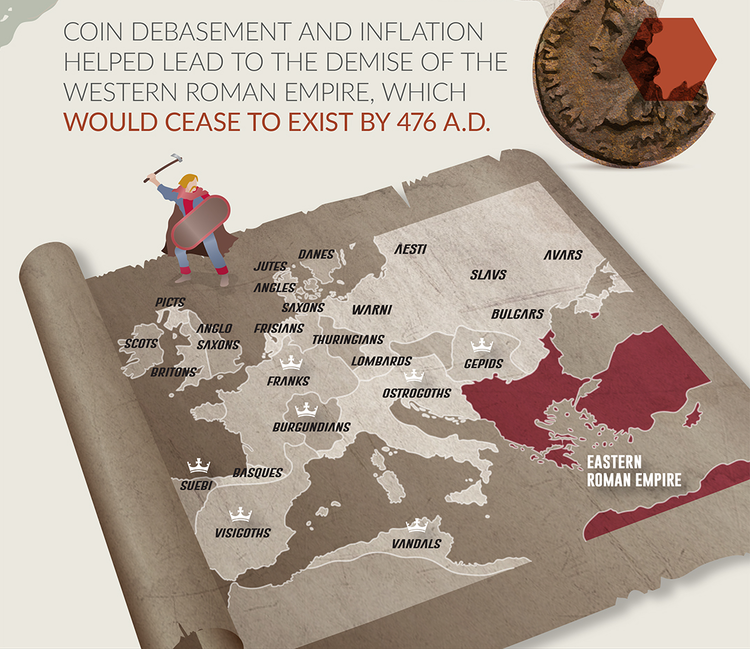 Empires are transient, as everything is.

There’s a vast difference between energy production and consumption. The idea that energy consumption is damaging to the climate is not accurate. If you used solar panels to store and consume the energy of the sun, that doesn’t damage the climate. If you used excess solar, geothermal, wind, or hydro to mine Bitcoin, you to create a smoother return on investment on the renewable infrastructure that you invested in, which increases investment in alternative energy, thereby decreasing costs of solar panels, wind turbines, etc. With greater investments in renewable energy, the energy costs trend asymptotically to 0¢/kWh.

Because Bitcoin is location-independent, it doesn’t have to be close to population centres. Miners are incentivised to find the least expensive electricity, and that energy is usually found where energy is least transportable. Generally, that is renewable energy which is produced at a time when there isn’t enough demand (“waste” energy), or produced too far from the demand because it lacks distribution networks.

An entrepreneur interested in mining would negotiate using excess geothermal energy off remote locations in Iceland, or to cap and combust methane (much better than to release it) in the Prairies, or using excess energy while turbines at hydroelectric dams ramp down (they can’t do this instantaneously).

The Bitcoin network already runs on 74% renewable energy, one of the cleanest industries (Rest of world runs on 18.2% renewables, boo-erns). 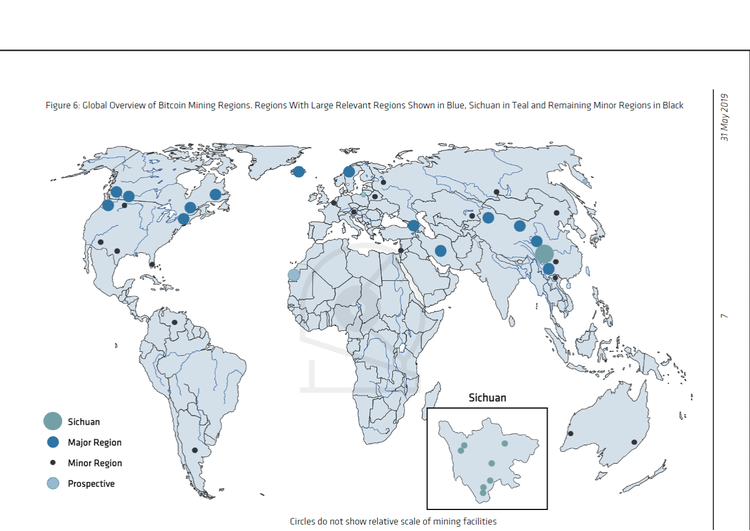 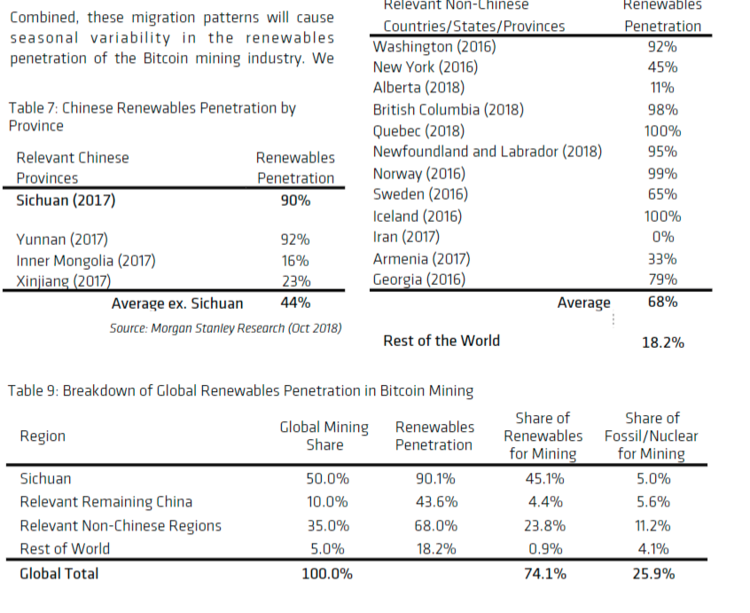 Because of the competitive nature of mining, profit margins trend toward 0. The beauty of having overhead costs is that it incentivizes the selling of BTC on the market, aiding its distribution. The infrastructure may exist in the not-so-far future for the average home miner to use the excess heat to warm water heaters or pools.

Bitcoin subsidises and stimulates the production of renewable energy in a way that no other system does.

What about Proof of Stake?

There is a lot of complexity in using an intrinsic currency as stake for the security of the same currency. The game theory gets very complicated. Proof of Work is straightforward: you spend resources on energy in order to secure the virtual asset. If you decide to mess it up, not only do you lose the value of the virtual asset, but you also spent money on energy that you are not going to get back. This creates a level of grounding.

Spare me the righteous indignation of the environmental impact and waste of energy of cryptocurrencies - it is unscientific and completely hypocritical. All of the journalistic analysis goes like this: if it takes x kilowatts to conduct 1 transaction, and we took it to world scale, how much energy would that cost? They disregard that the energy used is completely unrelated to the # of transactions. The equivalent flawed thinking would be, “if this pregnant lady’s belly is THIS large at 3 months, then in 5 years, it will be as big as this entire room.” There’s no scientific value of extrapolating something on a variable that is not dependent.

On the nature of conspicuous consumption

These are the times of frivolous consumerism. The economy seeks to achieve perpetual growth at the pace of quarterly earnings. Inflating numbers for the sake of balance sheet growth is not a good way to achieve sustainable growth. When credit is made artificially cheap, pricing mechanisms distort, and markets no longer express truth about value. Cheap credit encourages waste - it’s why fashion is cyclic, why roads are paved with low-grade asphalt (Canadians love _pot_holes), why cellphones feature planned obsolescence, and why empty mega-cities exist in China. We live in a time of peak wealth disparity, enabled by the Cantillon Effect of inflationary fiat. To tie this back into dentistry - the misguided game of servicing an ever-escalating debt load is why the dental care you receive may no longer be compatible with scientific literature.

Our current financial system was designed to encourage spending over saving - the baseless assumption is that more aggregate spending is better for the economy. The corrupt elites claim that the economy will come to a grinding halt if they do not keep adding fuel to the fire (otherwise known is the deflationary spiral argument, which is thoroughly debunked). It is a _humane_imperative to stop playing these destructive games with society.

We pay a heavy environmental price if we maintain this financial status quo. Under the gold standard, a free banking system stands as the protector of an economy’s stability and balanced growth. Financial freedom was taken away from us, but Bitcoin can restore it. Once this is clear, it is in _mankind’s_best interests to create a better money for a better future.