A Primer on Bitcoin Investor Sentiment and Changes in Saving Behavior

In our conversations with institutional investors, we often get asked the question “What is your model to value Bitcoin?”. Investors want to know what the fundamental drivers are behind BTC price gyrations, and whether at a given time Bitcoin is overvalued, undervalued, or at fair value. The new measures we suggest here are tools to help with that judgement. We build on work that goes back to 2011, and use the Bitcoin blockchain to extract market information not generally available for traditional commodities.

Also introduced is the Liveliness measure, which reflects the extent to which a cryptocurrency is meaningfully used by savers.

A History of Bitcoin Valuation Research

Here’s an overview of the quantitative approaches we’ve seen Bitcoin investors take to help them decide what its fair value is at any given time.

Given that we view Bitcoin’s primary use case as censorship resistant store of value (digital gold), and its utility as a payment mechanism as only secondary, our main goal in identifying the components of our valuation toolbox is to find data that specifically reflects changes in saving behavior.

The Bitcoin blockchain records a lot of data, but not all data. It is blind to how many bitcoins are lost. It doesn’t know whether a transaction represents a transition from one owner to another (sale), or whether it’s simply the same owner moving coins to another address in his control. It also doesn’t reflect off-chain transactions — for example it won’t show balance transfers from one Bitfinex user to another, or Liquid Sidechain transactions, or Lightning Network transactions.

The limitations of blockchain-recorded information, as well as the commodity nature of cryptocurrencies themselves, have consequences for valuation methodologies:

Our solution is to collect data that places each circulating quantity of Bitcoin in its historical context, in the tradition of previous work such as HODL Waves, Realized Cap, and MVRV. We focus on the data provided by the Bitcoin blockchain, as this is the ultimate (most secure and final) settlement layer for all its important transactions. By taking the Output Quantities of a block, and combining it with the Recorded Time of that block, we learn more about the behavior of Bitcoin savers.

Every time a bitcoin moves on the blockchain, its market value is realized. The owner was aware of its value and affirmed his control over it at the point of the move. It doesn’t matter if the transaction represents the owner sending the coins to somebody else (a sale or gift), or if it is an act of self-dealing.

If we value every coin at the time it last moved and aggregate these values, we arrive at the “Realized Capitalization .” 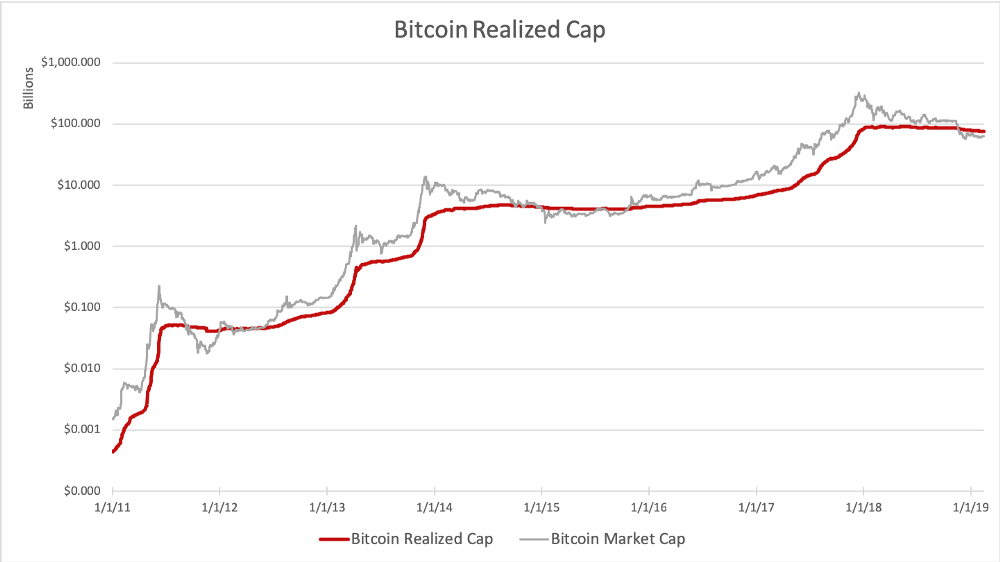 By subtracting the Realized Cap from the Market Cap, we calculate Unrealized Profit/Loss (P&L): 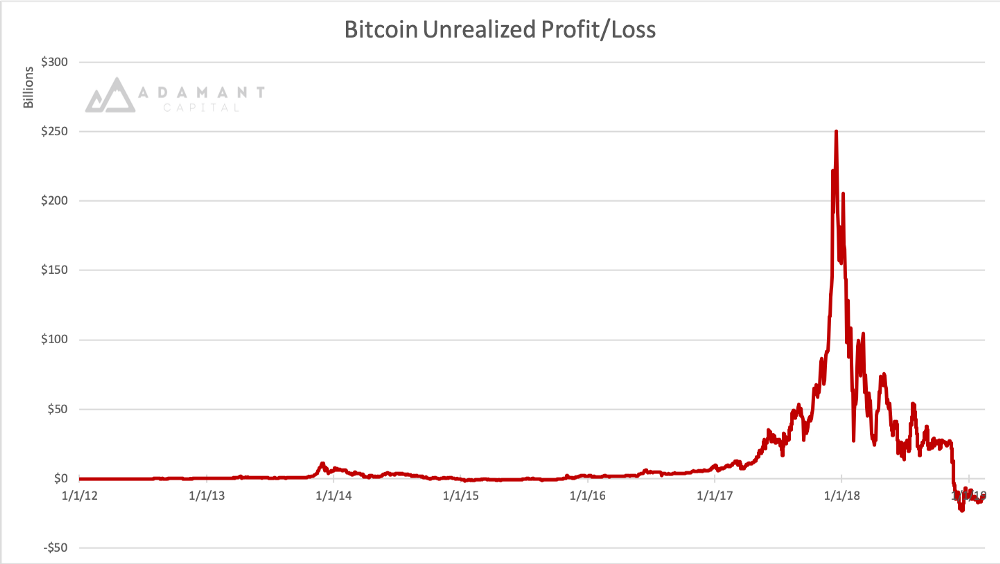 We see that Bitcoin investors in aggregate currently face a significant unrealized loss, which is quite a change if compared with the 2017 huge unrealized profits.

The measure of Unrealized Profit also contains the unrealizable profit of Lost Coins. Some coins are certainly lost as they were associated with a provably un-spendable output script, but the majority of lost coins can only be guessed by setting a threshold of inactivity after we consider them Lost.

The measure of Unrealized P&L estimates the total dollar amount of paper profits/losses in Bitcoin, but it does not clearly filter out the relative change that accompanies it. By dividing Unrealized P&L by the Market Cap, we arrive at the Relative Unrealized P&L, which can be interpreted as an indicator of investor sentiment: 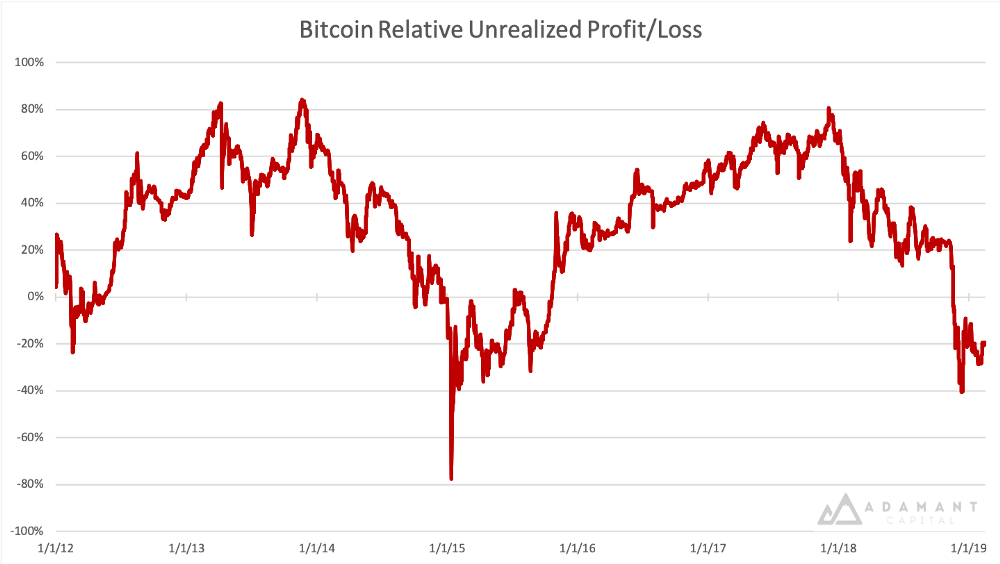 When a high percentage of Bitcoin’s market cap consists of unrealized profits, it can be interpreted that investors are greedy. The ratio drops as prices decline and investors likely become more fearful. When the unrealized gains turn into unrealized losses, we enter the phase of capitulation and apathy. Here’s a suggested illustration: 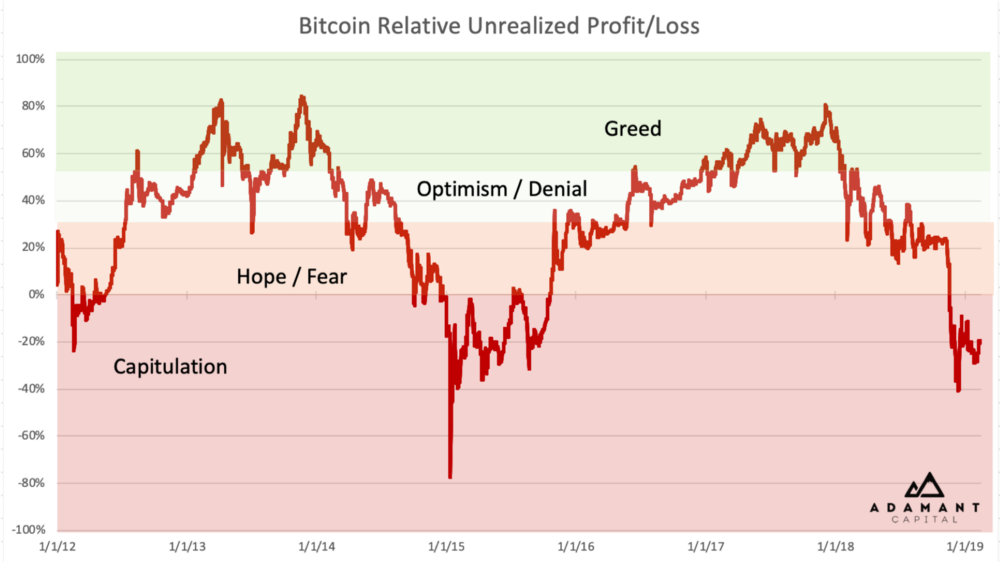 So why does the percentage of Relative Unrealized P&L go up in a bull market? What this indicates is that on average, investors are realizing profits at a slower rate than the growth in the market cap. For the time being, 20% of the market cap consists of ‘underwater’ holdings — coins that would generate losses if they were sold today.

Before we move on to a new suggested valuation tool, HODLer Net Position Change, we first need to explain the measure of Bitcoin Liveliness.

The idea of old coins moving on the blockchain has always spoken to the imagination of Bitcoin enthusiasts and investors: “What are the ‘Bitcoin whales’ doing?”, “What might Satoshi be up to?”, etc. The analytical work mentioned in our historic overview provides investors with information on how Bitcoin savers move coins at any given time. However, the challenge with measures such as HODL waves is that they don’t provide us with a clear signal or unambiguous utility. We instead propose a single measure that focuses on the coins that move relative to how long they were previously dormant.

Liveliness is a new quantitative measure that gives insights to shifts in saving behavior. The higher the amount of meaningful transaction settlement a blockchain accommodates, the higher its Liveliness. 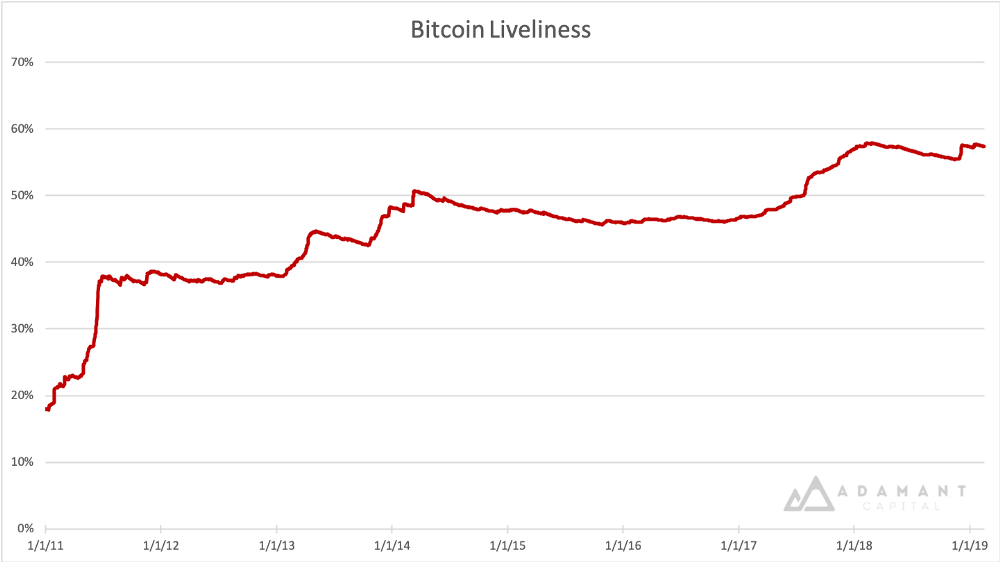 Let’s illustrate with a few examples:

Liveliness can be used to weight market cap if comparing cryptocurrencies, as it will be close to zero for currencies that have inflated market cap through pre-mined coins or wash trading of the same few units.

Besides this, Liveliness can also be used as a foundational tool from which to derive other insightful time series. One of these metrics is the aggregation of Lost or HODLed Bitcoins and alerts us to moves of large and old stashes. For this purpose, subtract Liveliness from 1 and multiply with the circulating supply at the time. 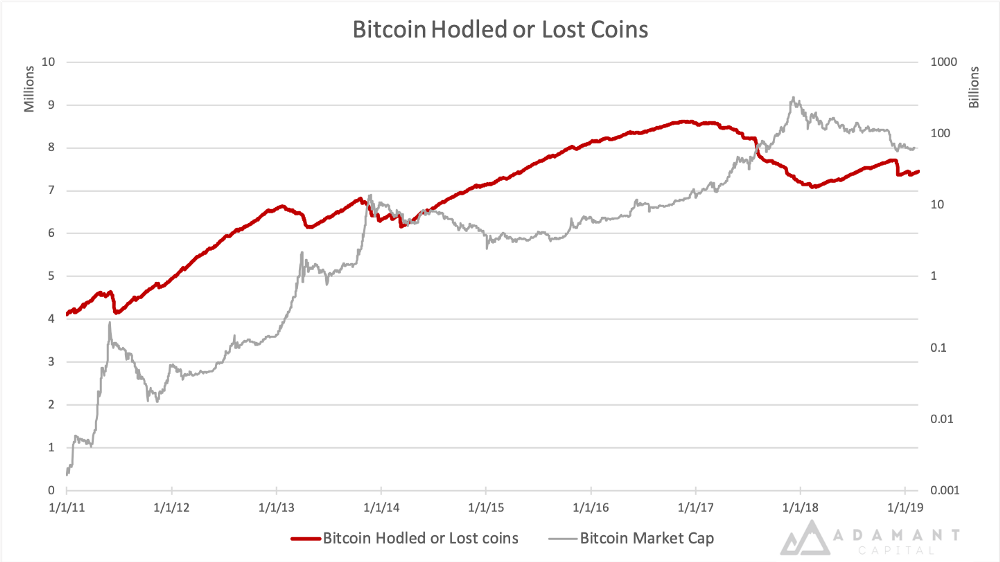 Now that we know the approximate number of coins that are held as a long term investment or are lost, we can approximate the monthly position change among Bitcoin savers. We call this measure HODLer Net Position Change. Because it only measures actual moves of coins, our graph naturally excludes lost coins. 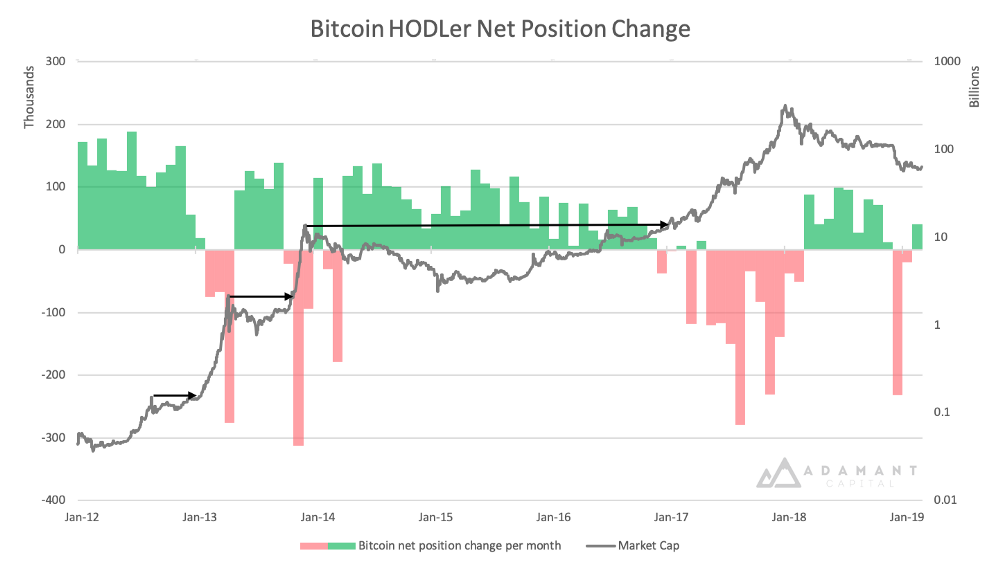 We see that significant quantities were cashed out during bull markets of Bitcoin, and net new positions were accumulated by HODLers in bear phases. Net buying seems to switch into net selling once the previous top is reached (cf. arrows on the graph above).

It’s important to note that a significant amount of coins are held on Bitcoin exchanges and that mere administrative decisions on their behalf can have a significant impact on measures like HODLer Net Position Change. However, serious effort has been made to de-anonymize exchange addresses, so future analysis should be able to mitigate for “exchange bias.”

For example, one anomaly in the graph is the recent negative position change of meaningful Bitcoin savings (Dec 2018). While at first sight this is worrisome, we found evidence suggesting that a significant part of the move stems from Coinbase reshuffling around 5% of all BTC in circulation.

Another notable negative position change is the 278,000 BTC net move in August 2017. This is likely attributable to the Bitcoin Cash hard fork (BCH) of that same month. Every Bitcoin private key gave access to an equivalent amount of BCH as the BTC in that wallet. And so with BCH rallying strongly — at some point reaching over 20% of a BTC — Bitcoin HODLers were incentivized to split the two via on-chain transactions and either buy more BCH and sell their BTC, or vice versa. Given how strong the (flawed) narrative was at the time of BCH being “the real Bitcoin,” it’s conceivable that many old bitcoins were actually sold. More analysis is needed in this area.

By creating tools that measure changes in saving behavior on the Bitcoin settlement layer, we believe to have meaningfully contributed to the valuation debate. Relative Unrealized Profit/Loss in Bitcoin tells us about Mr. Market’s emotional state, HODLer Net Position Change gives us information about how Bitcoin whales are moving their pieces on the chessboard, and Liveliness gives us a powerful tool to meaningfully compare long-term investor activity, as well as a platform for building new valuation measures in this space.

In a follow-up article we will share our take on what these and other measures tell us about Bitcoin’s valuation today. Feel free to contact us with questions, or sign up here for future research updates.